A dead caver became an attraction during the Kentucky Cave War

At the beginning of the 1920s, what was described as a cave war erupted in the American state of Kentucky. The belligerents were cave owners in pursuit of tourist money, who often played dirty tricks on each other. Competing local landowners along Mammoth Cave Ridge and Flint Ridge often put themselves at risk by exploring deep underground with primitive safety gear. Floyd Collins was probably the most well known of the victims of the Kentucky Cave War. Over the years he dreamed of becoming famous and eventually he did get his share of media attention - by being buried four times. So how did he manage it?

Floyd Collins discovered Crystal Cave in 1917, and it became his family’s property. The magnificent underground canyon with a garden of white, orange and brown gypsum formations could have quickly become a tourist attraction. But tourists rarely got to the Collins Crystal Cave as it was too far from tourist routes. To make things worse, other cave owners often played dirty. They blocked the roads and regularly told tourists the Crystal Cave was closed. 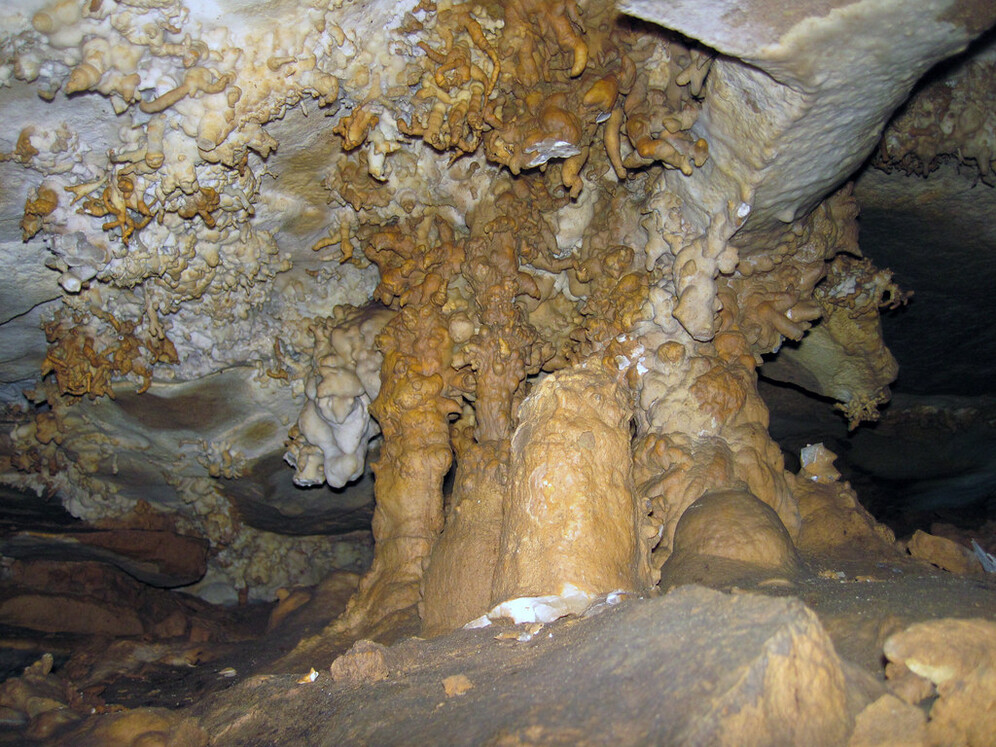 The magnificent underground canyon with a garden of white, orange and brown gypsum formations could have quickly become a tourist attraction / Photo by James St. John / via Flickr

The increasing popularity of cave tours in the 20th century followed the success of the Mammoth Cave, which is now a National Park in central Kentucky.

It was called Mammoth in the early 1800s, referring to the enormous size of the cave’s chambers. Mammoth Cave is the world’s most extensive cave system, covering more than 400 miles (640 km) of the known passageways. Mammoth Cave became increasingly popular throughout the 19th century attracting celebrities. Mammoth Cave is the world’s most extensive cave system, covering more than 400 miles (640 km) of the known passageways / Photo by Daniel Schwen / via Wikimedia

But it’s not the only cave in Kentucky. In the early 20th century, the success of Mammoth Cave prompted a boom in cave tourism as many small cave owners also started to offer tours.

This period came to be known as the Kentucky Cave War, with cutthroat competition between local entrepreneurs.
American cave explorer Floyd Collins in 1924 in Kentucky./ Photo by Robert W. Brucker

Floyd Collins, in his desire to attract more clients to his Crystal Cave, was determined to find out whether it could be part of the Mammoth Cave system. So he looked for a passage connecting the Crystal and the Mammoth caves.

Opening an aisle would increase the flow of visitors and, accordingly, profit.

An experienced caver, he found a small cave in the forest and thought it could be a part of this passage.

On January 30, 1925, a 37-year-old Floyd Collins attempted to explore this cave and disappeared. He was at a depth of about 18 metres in the cave when the lantern suddenly went out. Collins stumbled fell into a narrow crevice, and his leg got caught. Relatives knew where Floyd was heading, and a day later he heard voices calling him. However, there was no way to get to the place where Floyd had been stuck — the passage was too narrow. Several people, including a 17-year-old teenager, tried to squeeze to the poor fellow, but all attempts failed. 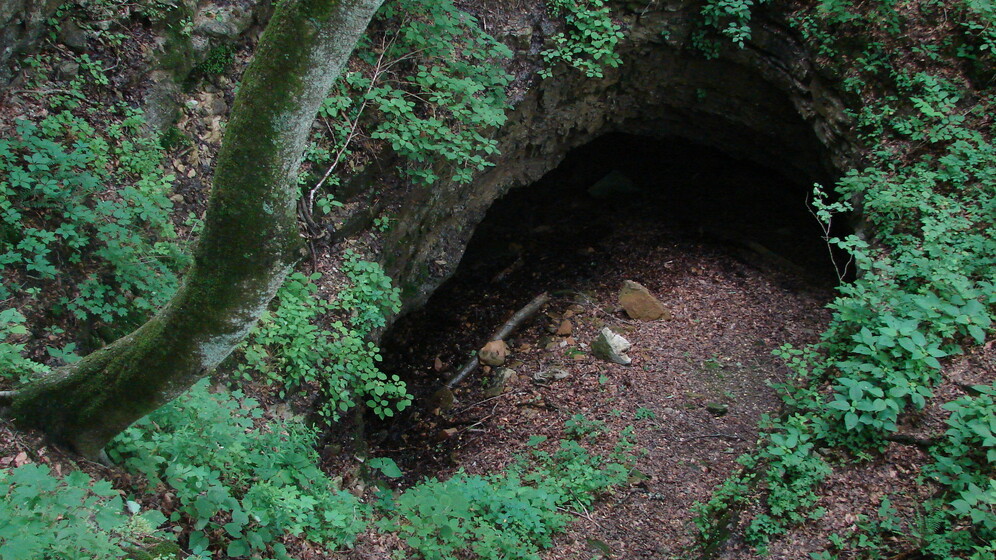 Only in the evening, having undressed to his underwear, could his younger brother, Homer, reach Floyd. Floyd Collins couldn’t move his hands, so Homer had to feed his brother. Eventually, the predicament grabbed the attention of the newspapers. The forest around the cave was crowded with journalists and enthusiasts who claimed they could save him.

William Burke Miller, a correspondent for the local newspaper, The Courier-Journal, thought this was a chance in his career. Called ‘Skeets’ for his physique, he proved to be the ideal rescuer. Miller went down to Floyd Collins several times, and not so much to interview him as to feed the unfortunate man and try to clean up the debris around him. At the same time, Miller’s reports made Collins famous overnight throughout America. The story of Collins even earned Miller a Pulitzer Prize. 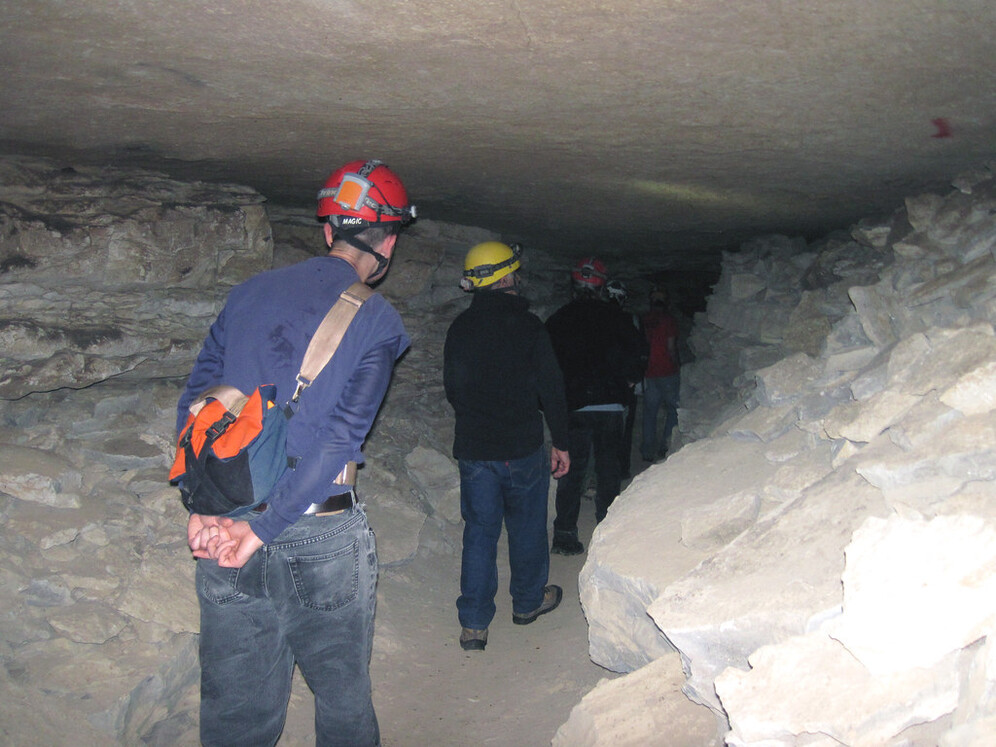 An inspection revealed it was too dangerous to dig through the rubble / Photo by James St. John / via Flickr

Several unsuccessful attempts to free Collins failed miserably. On February 4, after several landslides in the cave, an inspection revealed it was too dangerous to dig through the rubble. Floyd was now out of reach.

However, there was still hope. Rescuers began digging a new tunnel to reach Collins on the other side. They even managed to finish it. Floyd Collins was finally found on February 17. Unfortunately, he’d died three to four days earlier. It took another two months to bring the body out from the cave. Only on April 26, was Floyd buried on the Collins farm. But the misadventures of the unlucky caver did not end there.

In 1927, the Collins family sold the farm and cave to local dentist Harry B. Thomas. Floyd was dug up, placed in a casket with a glass lid. The coffin was moved inside the Crystal Cave. So Floyd Collins was able to fulfil his desire to attract tourists finally but in a rather unexpected way. And he was buried for the second time. 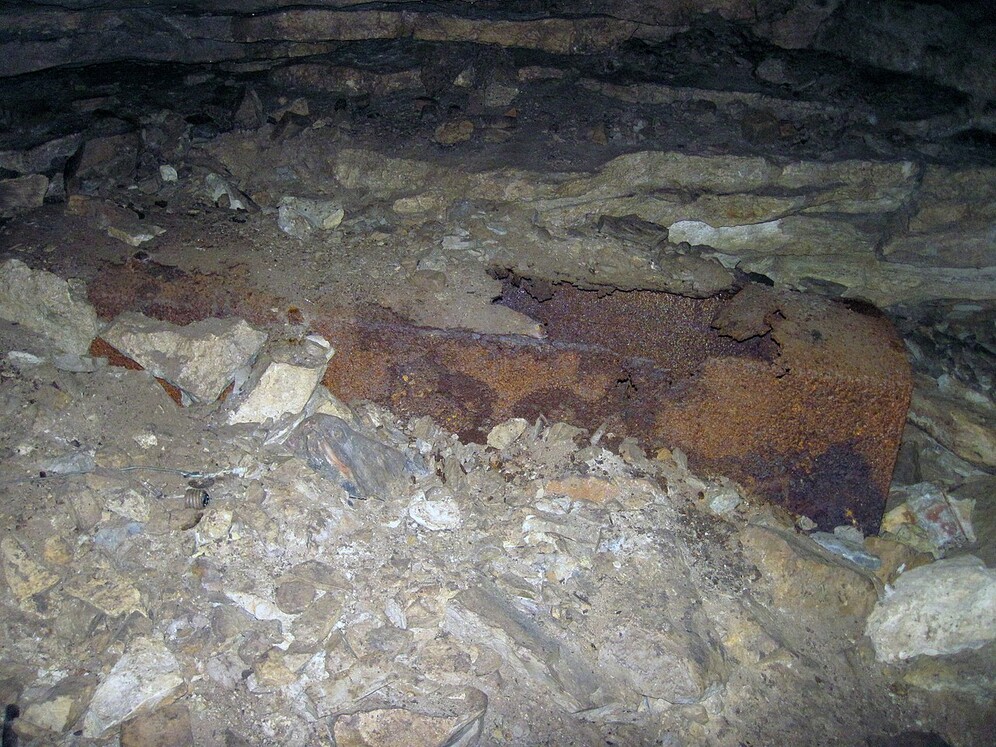 A metal casket in Mammoth Cave, claimed to be that of Floyd Collins / Photo by James St. John / via Flickr

Floyd Collins’ role as the main attraction in the Crystal Cave was briefly interrupted in 1929. On the night of March 18-19, Floyd’s body was stolen, seemingly to dump it into the waters of the Green River. It’s not clear whether it was a strange attempt to bury the man, or just vandalism. Collins’ remains were entangled in a thicket, where Dr Thomas found them the next day. The body of Floyd Collins was missing a leg, the one he got trapped between the rock. The body was returned to the casket and chained in a remote corner of the cave. So Floyd Collins was buried for the third time.

The Collins family was not too happy about what was happening with the body of their relative. Almost immediately, legal proceedings began against Dr Thomas for the return of the remains. The issue was eventually resolved 60 years later, in 1989, when the ashes of Floyd Collins were buried for the fourth time in the cemetery of the Mammoth Cave Baptist Church, probably for the last time. However, soon after the interment, a truck crashed into the monument where the ashes were stored, destroying it.