New generation killer mutant tick on the loose in Siberia
Don't buy 5G protection gear, until you read this story

Leech smartphone designer:“ The more time you spend online, the more blood will be consumed.”

Russian designer Aristarkh Chernyshyov who specialises in tech gadgets talked with RTD about his extravagant invention, how leeches came into the picture, and what the future of healthcare will look like in the big data era.

How would you define your modern art style?
Why gadgets?

Aristarkh Chernyshyov: My style is new media art; it's quite broad. I've been into the world of gadgets and devices since the 2000s. One of new media art's focuses is communication devices and interfaces, gadgets that is. What they can look like is a thing to study in itself — this is the common topic for media art, plenty of room for imagination to create new devices.

What is your connection to new media art?

A.C.: The process resembles the 'supply & demand' model. Art brings up topics that have appeared spontaneously or have always been fascinating to people. New technology brings up new topics and genres. As more and more new devices come into the picture, society will obviously become interested in them. Artists respond to that interest — there's nothing surprising about that.

A.C.: Actually, the project's main idea is the symbiosis between humans and the new species. We aren't surprised at having domestic animals like chickens, goats or sheep. We've domesticated them to get milk, eggs, leather, fat, etc. It took hundreds of years for humans to do that. No one is wondering now, "Why have we domesticated these animals and are using them!" But with the progress speeding up, it's possible to create new species and tame them. The process wouldn't take as long as domesticating wild animals. We might be surprised by this now, but not so much so in a hundred years. The main question is how humans would adapt to such fast changes and how they would accept it.

"What relationships will we have with these new species?" is the main question of the project.

Would this symbiosis be mutually beneficial or harmful or even dangerous? The visualisation is my personal idea of it. At the moment there's no available technology that would be capable of creating something like that. I'm an artist, so my creation would look just as I painted it. Some commentators say this is disgusting and repulsive. But I didn't have a pleasant device in mind in the first place.

Where did the idea to combine an organism with electronics come from?

A.C.: Humans mostly needed domesticated animals for food. Today there would probably be something different needed from animals or new devices. Information engagement, in particular. People feed on information, or they would fall out of human society. That's why not only animals but plants as well (my next project is on human-plant symbiosis) would be required to have new functions – not only providing nutrition but supporting new needs, like information engagement.

How long does it take you to turn an idea into a full concept? 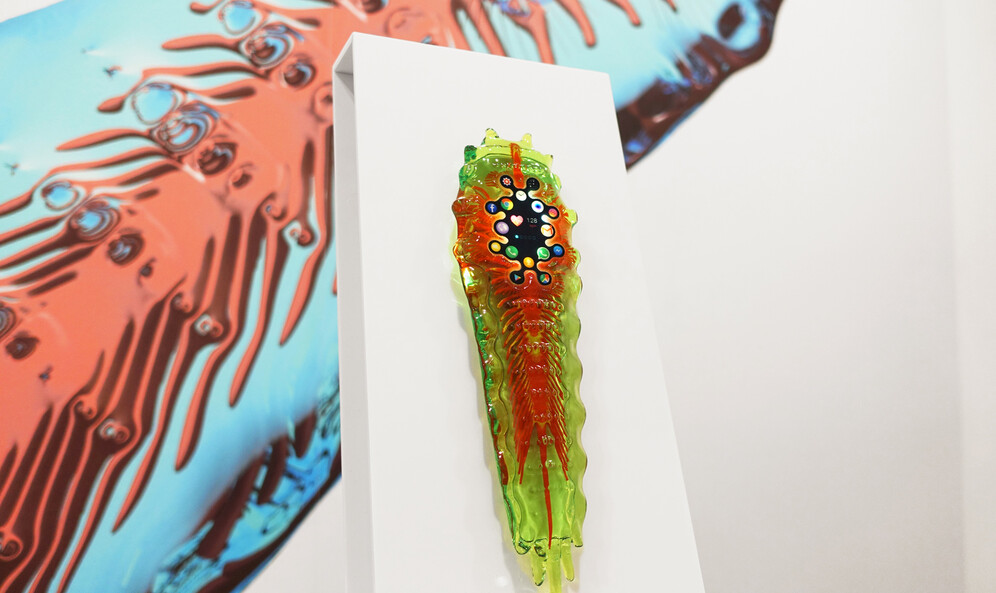 A.C.: I came up with the leech idea last May, I think. It was a contemplative concept at first, there was no draft of it – just some text in my mind and rough bioelectronic device functionality. I discussed the idea with my colleagues. Some were sceptical about the device; others welcomed it. By midsummer, I had come up with the visual image and made a dummy 3D model. After that, the dummies have been circulating around the web for some time. By autumn, a limited functionality prototype had been made and was later presented at an exhibition in Kazan, Tatarstan. After that, we created a video – since during the lockdown we had more free time. We uploaded it, and it became popular. If people discuss it, that means it's relevant.

People see references to The Matrix and Black Mirror in your PiO 1.1. Did the inspiration come from the cyberpunk universes?

A.C.: There is indeed something similar to David Cronenberg's movies. Not smartphone watches, but some bio-devices. Black Mirror does work with the same topics as the new media art. You can't directly say that there was the exact device in some movie, but these ideas are general for the modern world. That's why it feels like PiO 1.1 resembles The Matrix or Black Mirror. Nothing surprising in this case.

So the leech is the new smartphone?

A.C.: The functionality of these devices is in high demand nowadays – people want to keep their health in check. The current devices just collect simple and easily-accessible data – they monitor heart rate, track steps, check the number of calories burned off. However, they are unable to go into more thorough analysis of what goes on in a human body.

A leech, as it feeds on human blood, gets the material for that analysis. Not only can it take a blood sample, but it will also be able to run the actual analysis. The quantity and the quality of the data increases.

With such devices, healthcare may hit a whole new level.

The coronavirus epidemic shows us that healthcare is vulnerable and has a lot of weak spots. The way it's designed doesn't match modern technology and capabilities. There are still local hospitals where doctors chart something into medical records by hand. It's ridiculous because all these data comprise "Big Data". That includes the data on a person's health, illnesses and diagnoses. It could all have been put into an electronic database long ago and analysed by knowledge-based systems. 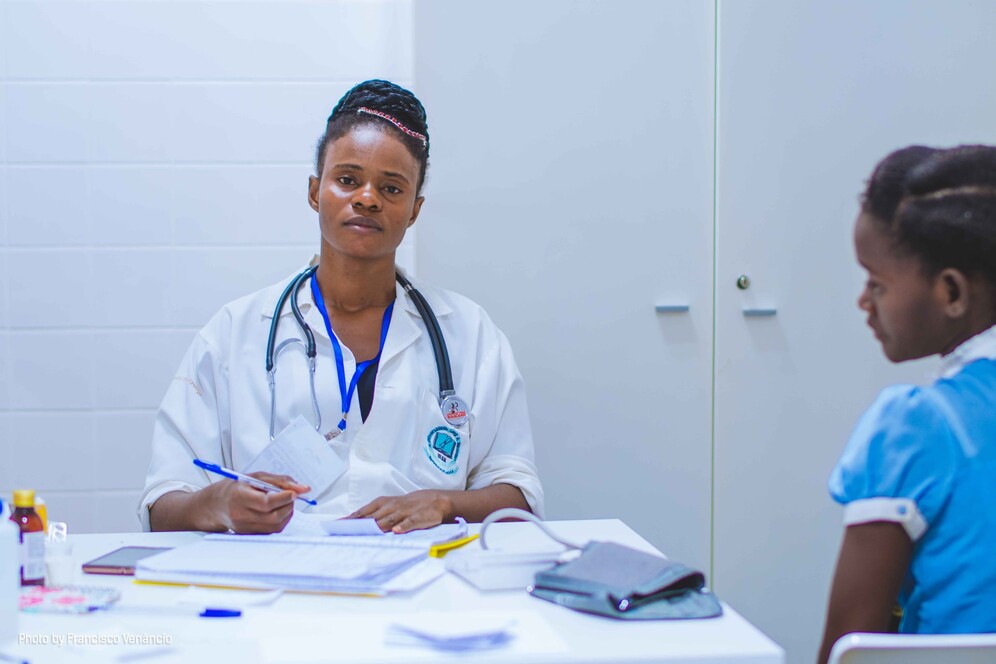 There are about 20,000 human illnesses which is a ridiculous figure for big data. Algorithms can analyse much bogger amounts. Writing up ot typing in medical records manually is a time-consuming and somewhat meaningless activity/Francisco Venancio via Unsplash

Inventing a device that would create the database automatically without need for manual labour would be a great start. Based upon the data analysis, patients could be notified that they are presumably ill.

Such algorithms could monitor the human body, replace periodic clinical examinations, and prevent some illnesses.

An illness may develop long before any symptoms become visible, except for rapidly-evolving infectious diseases. For example, diabetes or cardiovascular diseases don't evolve in a day.

Foreign companies have the development of data collection and analysis systems in progress. Google, in particular. But all of these inventions are stalled by sluggish legal systems and red tape. However, an artist is free to fantasise and can travel in time. I'm not restricted by legal systems, because it's just a draft project.

How do you implement all the apps into the "leech"?

A.C.: My idea is that the back of the creature will have a sensor display with icons on it. If you look closely into the interface, you might notice the white dots. You'll be able to scroll the home screen pages to a new interface just like on an ordinary smartphone. The icon set is based on the services that are most popular with smartphone users – phone, e-mail, messengers, web browser, and social networks. I've just picked the most popular ones – no hidden motives here, political or other.

The leech smartphone will be using blood as an alternative energy source. Is this a reference to smartphones bleeding us dry? 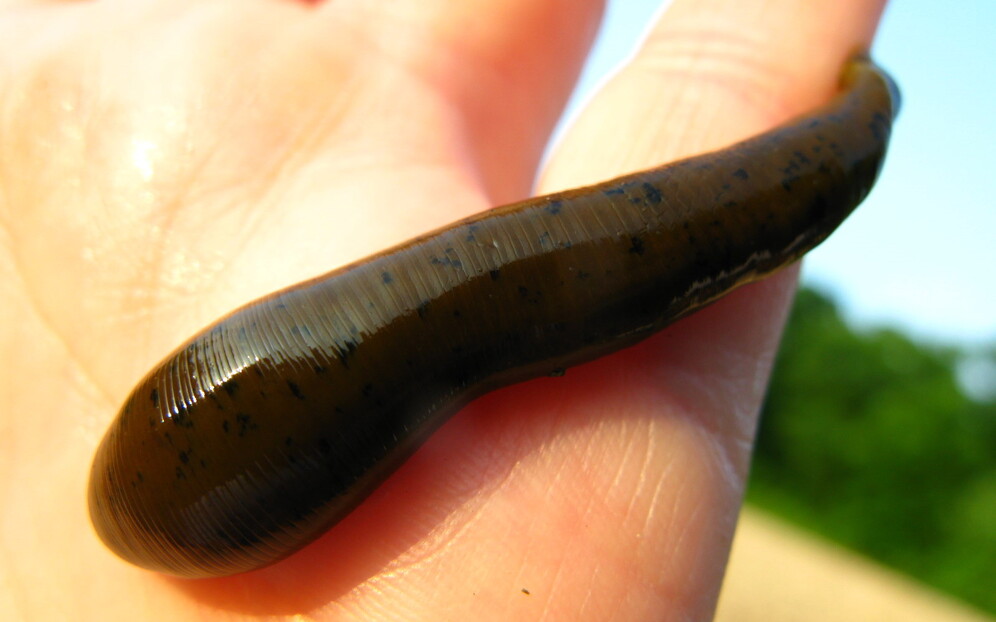 A.C.: Yes, partially. Blood usage will be in direct proportion to the time consumed by users online. So the more time you spend online, the more blood will be consumed. That was a direct reference I initially had in mind. Thus, you could tell straight away – pale and exhausted people spend all their time using social networks that bleed them dry. But that does fully reflect the mutual exploitation. The device lives off of you, and you pay for being socially engaged with your life – this is how it is in real life.

Who is your partner to manage the technical side?

A.C.: Most of the things I've made are just concepts that aren't supposed to become a final product. It's nowhere near from being implemented the way it's presented in my project. There is no technology available just yet – only some elements that could be incorporated into the device. These devices exist as prototypes of limited functionality.

How do your students react to such inventions?

A.C.: The students study new media art, and we've got quite a platform for it. As a matter of fact, we discuss ethical issues of new devices with students as well – it's a part of their educational programme. We discuss many different things.