Female Power: How Many Glass Ceilings do Women in the US Still Have to Crack?
RT Documentary wins the Human Rights Press Award with the film 'Lady Cops in Afghanistan'

Afghanistan Before and After the Taliban

It’s hard to believe that the women in the photo are from the same country but different years. Inspired by fascinating photos of Afghan women in the 1960s, RTD recalls how life’s changed in Afghanistan over the past 60 years.

Young Afghan ladies walking down the street with their heads and faces uncovered. Kabul, 1960s / Wordpress.com

Earlier this week, the Taliban took over Kabul and proclaimed the war in Afghanistan to be over. As chaos unleashed at Kabul airport, most residents of the Afghan capital, feeling they had no hope of leaving the country, braced themselves for life under harsh Taliban rules.

The signs of upcoming change have come quickly. As the Taliban gunmen marched victoriously into the presidential palace, the streets of the Afghan capital were emptied of women, who stayed home for fear of being prosecuted for not wearing a burqa or going out without a male escort.

Today many women in Kabul don’t own burqas and in the past days have been trying to find them, which has created a real deficit. Similarly, many men don’t wear beards, that are also required by the Taliban law.

“My first concern was to grow my beard and how to grow it fast. I also checked with my wife if there were enough burqas for her and the girls,” Gul Mohammed Hakim, a Kabul resident told Reuters.

As the Taliban seized control of the capital, the women of Kabul have had to destroy everything they had accomplished in the past years.

“I have nearly completed two simultaneous degrees from two of the best universities in Afghanistan. Now it looks like I have to burn everything I achieved in 24 years of my life. Having any ID card or awards from the American University is risky now; even if we keep them, we are not able to use them. There are no jobs for us in Afghanistan”, says a young Afghan woman from Kabul, interviewed by the Guardian.

Though the return to power of the Taliban has exacerbated the fears of the female population, the women of Afghanistan have long been faced with major challenges. Lacking career opportunities, many women would opt for a job with the police. They were rejected by their relatives and society, but still ready to put their lives at deadly risk to achieve an independent career. To find out more about the Lady Cops of Afghanistan  – watch our award-winning documentary.

The fear and despair that have reigned in Afghanistan for the past decades have obscured distant memories of peace and stability. But, actually, it hasn’t always been all about violence and poverty…

#Afghanistan and #Afghan life in the mid to late 1960s. pic.twitter.com/3PZofCIL52

Ravaged by internal conflicts and foreign interventions for centuries, Afghanistan made several attempts to embrace peace and stability in the mid-20th century. In the 1950s and the 1960s, the country seemingly succeeded in pursuing a more liberal lifestyle, while paying due respect to traditions.

Today, these photos, taken by American University professor Dr. Bill Podlich in Afghanistan in the 1960s, seem the only relics of those moments of peace and hope.

It was a brief era of seemingly peaceful development, when women were not required to wear burqas, and traditional mud houses in Kabul started to give way to modern buildings. It seemed like the country was finally making its way towards stability and prosperity.

Medical School in Kabul, 1962. Medical students listening to their professor as they study the plaster cast of a human body part / Wordpress.com

However, progress was blocked in the 1970s, with an endless series of coups and civil wars rolling back all the achievements of the 1950s and the 1960s. The civil war, Taliban rule, and the US-led invasion have turned this fragile stability into chaos and destruction.

In the past 20 years, marked by the US presence, Afghanistan has seen some positive developments. Many girls and women got a chance to attend school and university. Women’s employment was boosted. Construction of modern buildings in Kabul restarted. New facilities, including hospitals, opened their doors for Afghan citizens, including women.

Though international reconstruction effort opened education and employment to Afghan women, most of them had to stick to the traditional roles of housewives. Those who chose to work often met with public resentment.

Sara Bohayi is the first and only woman taxi driver in Afghanistan. Harsh criticism and even threats didn’t prevent the brave woman from becoming a breadwinner herself. Watch our documentary The Afghan Lady Cab to learn about Sara’s story.

Despite moderate progress, the past ten years have left tens of thousands of fighters and civilians dead or injured, and hundreds of thousands displaced. Millions of children have remained out of school, and most of them are girls, mainly due to the ongoing fighting and lack of female teachers.

Meanwhile, opiates production has thrived and has become the bedrock of Afghanistan’s rural economy. UN figures show that poppy cultivation has skyrocketed in the past 20 years, and 22 of the country’s 34 provinces are involved in poppy cultivation.

When it comes to heroin, a non-intervention policy has been going strong over the past 20 years in Afghanistan, where over 90% of the world’s black-market opium is produced. In the Afghan Overdose documentary, RTD gives the lowdown on this dirty business.

The Taliban claim to want peace and stability for the country, but Afghans fear the movement’s leaders could return the country to the hardline Islamic rule that marked their previous period in power between 1996 and 2001. At the time, they imposed a strict interpretation of Islamic religious law, banning women from education and employment, forcing them to cover their faces and bodies in public, and resorting to archaic punishments to enforce discipline. Hanging, whipping, and stoning were often applied to even minor transgressors.

It’s not yet clear how much freedom the Taliban will permit, but some disturbing change is already apparent. Since Monday, gunmen have used loudspeakers in different parts of Kabul to urge women to wear burqas. Residents say, the fighters have begun enforcement of this strict code in some parts of the city. Most businesses have shut their doors, with just a few grocery shops and cafes open.

The nature of the new government is probably best reflected in the TV guide, where popular shows and Turkish soap operas have given way to religious programs with no advertisements. 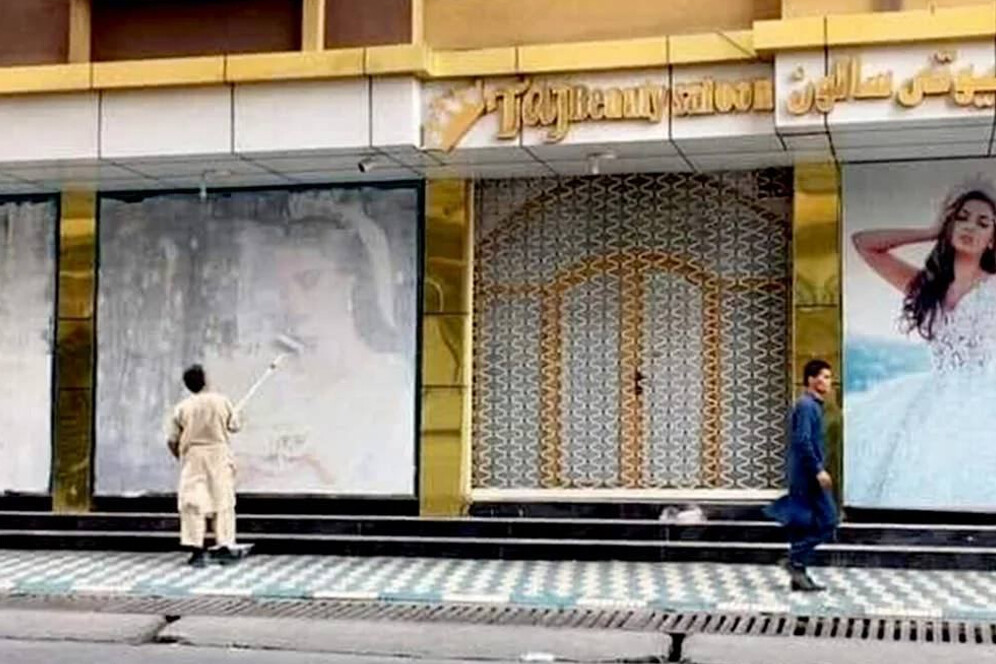 There remain flickers of hope, yet these are too weak to draw any conclusions. After speaking out in favor of women’s rights, the Taliban leaders, seeking public support and international recognition, visited Kabul’s hospitals, where they called on women healthcare workers to continue to perform their duties. A Taliban official, speaking to a female journalist, expressed surprise as to why people were still afraid of the Taliban.

In an effort to win hearts and minds, the #Taliban has promised to protect women’s rights within the limits of Islam. The group set up an interview with a female presenter to back up its words.

The new rulers also suggested that Wahees Majrooh, the health minister in Ashraf Ghani’s cabinet, should remain at his post. Majrooh announced this news on his Facebook page, writing: “God blessed me the pride of serving in the health sector for my people and my country and I will do my best as long as I have this responsibility.”

Still, given that all these moves are a part of a broader campaign to present a “human face” and gain public support, the future of the Afghan people remains uncertain. And it seems especially grim as experts voice concerns that the Taliban will not be able to manage the already collapsing Afghan economy, which will push more people to the brink of extreme poverty.

Following the Taliban's seizure of power in #Afghanistan, RT Arabic spoke with the group’s spokesperson Mohammad Naeem about whether the #Taliban government could control the situation in the country and how the US withdrawal led to such chaos. pic.twitter.com/e9V0Gsv06s

Poverty has long been one of Afghanistan’s curses. In some provinces the situation is so desperate that locals go to extremes to keep themselves and their families afloat. In Herat Province, driven by despair, people sell their kidneys at ridiculous prices to support their kids. RT Documentary Afghan Kidney Sales delves deeper into this horrifying phenomenon.

In some areas previously taken over by the Taliban, women have already been banned from schools and universities, and punished for leaving the house unescorted. Some are claimed to have been killed for disobedience. And this is only a drop in the ocean, compared to the losses the country has suffered in the past 60 years.

Could this all have been prevented?