Caste away: how Indian discrimination patterns have seeped into the US

Last summer, the US was shaken by the wave of Black Lives Matter protests meant to expose the problem of institutional racism that still exists in society. Thousands of people took to the streets in American cities to draw attention to racial bias, anti-Black violence and discrimination. Meanwhile, another issue, albeit much less visible and almost never mentioned, has surfaced at the heart of high-tech corporate America. In June, California’s Department of Fair Employment and Housing initiated a lawsuit against Cisco, a multibillion-dollar tech conglomerate, for caste discrimination against an engineer of Indian descent. However, the situation isn’t as straightforward as it would have been if the alleged discrimination had been based on race. Because US law does not officially recognise the old Indian caste system, technically, “casteism” cannot be an offence.

The plaintiff’s name has not been revealed to the press. He complained that he’d been harassed by co-workers and faced retaliation after bringing the issue to the company’s attention. As a Dalit (a caste that is considered to be at the very bottom of Indian social hierarchy and generally referred to as “untouchables”) he claimed that his high-caste Brahmin supervisors had denied him promotion, a raise and other professional opportunities. 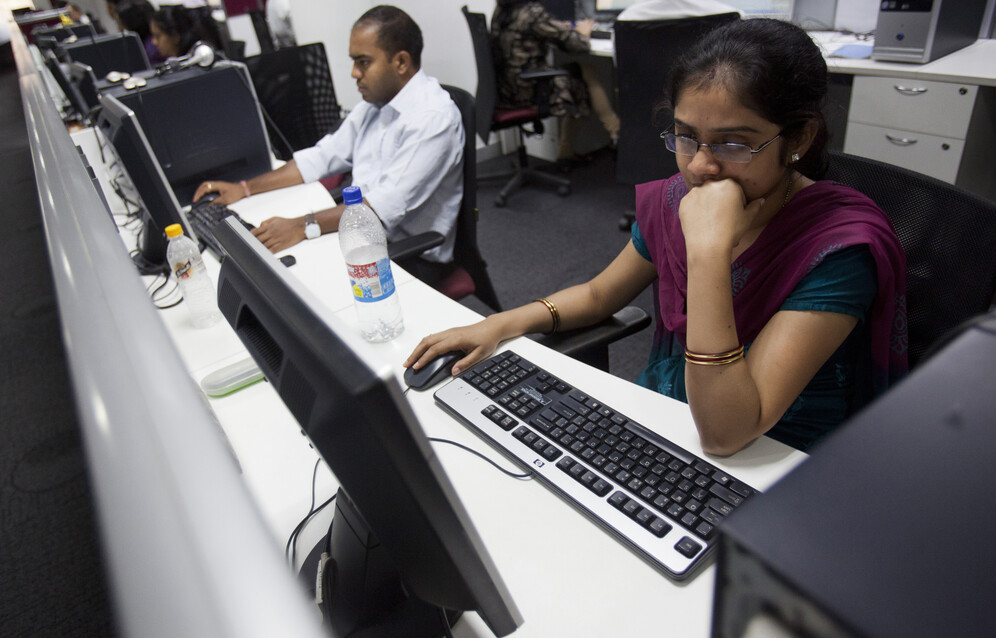 Employees work on their computer terminals on the floor of an outsourcing centre in Bangalore. /REUTERS by Vivek Prakash

Interestingly, when he initially approached the company HR department in December 2016, an investigation confirmed instances of caste-based discrimination, but “ultimately concluded "that caste discrimination was not unlawfu" under U.S. law, which only explicitly outlaws discrimination based on race, color, religion, sex and national origin”. Basically, a company that was ranked No. 2 on Fortune’s 100 Best Workplaces for Diversity in 2019, acknowledged that there was a problem, but saw no reason to fix it.

Historically, Brahmins were always at the top of the Indian caste system and were traditionally priests or scholars. Next came Kshatriyas, rulers and warriors of society, followed by Vaishyas, traders, and Shudras, laborers. The Chalandalas, also known as Dalits or, “untouchables” had a status so low, that they were technically beneath the whole caste system itself.

Dalits, which means “oppressed,” is a self-chosen identity of the former “untouchables” who represent almost a quarter of India’s population. Although officially caste discrimination has been banned in India since 1948, and laws against it have been enacted all over South Asia, the oppressive system remains unyielding to this day. Even now, a person’s caste often predetermines their career, whether they can marry someone out of caste, and, ultimately, the life they live. Violence and discrimination remain a reality for 200 million Dalits in India. And, as it turns out, they can’t even break free of the prejudice by leaving their home country. 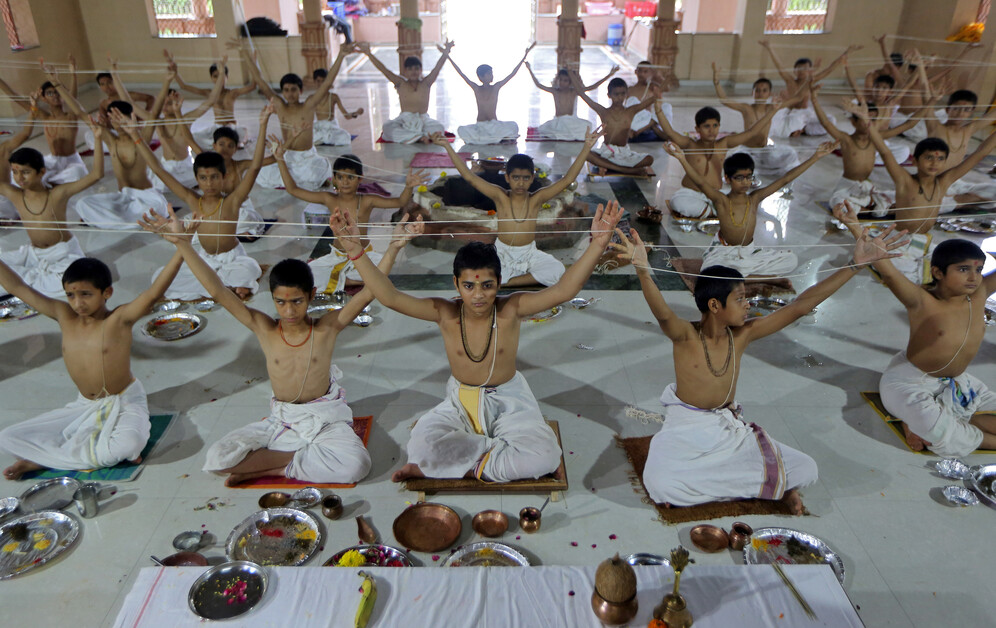 Brahmins or upper-caste Hindus boys during a prayer ceremony./REUTERS/Amit Dave

In the US, however, the word “caste” is not a household term. Few Americans know that India’s caste system stratifies society into an equivalent of strictly regimented social classes. It would probably never occur to them to inquire about the caste of an Indian immigrant — unless the person asking is another higher-caste Indian American. As it was for the majority of those who chose to emigrate to America throughout history, they did so to escape a wide range of oppression or discrimination based on religion or social status. It would make sense then to assume that, upon leaving India, the notion of caste would dissipate and become irrelevant. However, within the Indian community in the USA, caste background is, apparently, still a big deal.

While up to 90% of Indians who moved to the US belong to upper castes, the number of Dalit immigrants has been growing in recent years.

Devesh Kapur, professor of South Asian studies at Johns Hopkins University and author of “Diaspora, Development, and Democracy: The Domestic Impact of International Migration from India”, states that only 1.5 percent of Indian immigrants in the United States were Dalits or from other lower-ranked castes. Given that 5 million South Asians live in the US right now, the Dalit population shrinks to just 75 thousand, making them a minority within a minority.

In the US, South Asians have always been considered a model minority; they’re law-abiding, skilled professionals who earn around $100,000 dollars a year per household. America’s tech industry, for example, has come to depend very much on staff of Indian origin. According to the State Department, the US has issued more than 1.7 million H-1B (speciality occupation) visas since 2009, 65% of which have gone to people of Indian nationality. Close to 70% of H-1B visa holders work in the tech industry, which gives a good idea of how many Indians are concentrated in Silicon Valley, which is often referred to as “Agraharam Valley” — the part of an Indian village where Brahmins live in neat and charming homes, oblivious to the realities faced by other social classes. 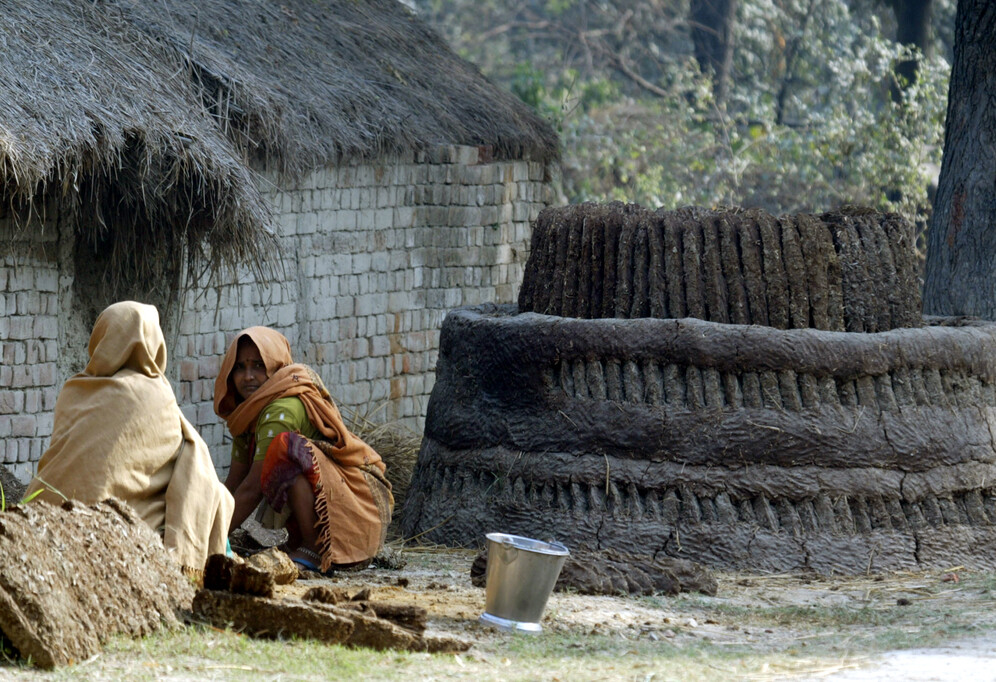 Dalit women on the outskirts of the northern Indian city of Lucknow./ REUTERS by Pawan Kumar

To fit the mould, once they’re in the US, many Indians prefer to conceal the fact they are from lower castes. However, people from the diaspora find ways to determine their background without asking direct questions. While it isn’t always clear which cast people are from just by looking at them, a lighter skin tone sometimes indicates a higher cast, as well as certain last names, even nutritional preference (most Brahmins are vegetarian), can be a giveaway. Based on accounts from Dalit Indians in the US, they prefer to apply for jobs where they won’t work side by side with, or at least be supervised by, fellow Indians. The Washington Post, for instance, recounts the experience of Kaila, a Dalit engineer saying, "In more than 100 job interviews for contract work over the past 20 years <…> he got only one job offer when another Indian interviewed him in person”, as they were quick to figure out he’s a Dalit. Apparently, for many Indians, standing in the social hierarchy plays a far more important role than professional qualifications.

Higher-caste Hindus often perceive Dalits as “inherently lazy, opportunistic and not talented,” and often act to get them fired by, for instance, giving them unfavourable peer reviews.

The unnamed engineer suing Cisco is not an isolated case; it’s indicative of a much larger phenomenon. The South Asian advocacy organization, Equality Labs’ survey, published in 2018, shines a light on caste discrimination in the US. Upon examining the ways that caste plays out in the South Asian diaspora based on answers from 1500 respondents, it demonstrated that “about 67% of Dalit respondents and 12% of Shudra respondents reported being treated unfairly in their American workplace because of their caste. Those from marginalized castes also reported facing discrimination in American educational institutions and said they lived in fear of their caste being ‘outed’.” Equality Labs also shared its data with Vice news, reporting that “In the weeks since the <CISCO> lawsuit was announced, more than 250 Dalits from Google, Facebook, Microsoft, Apple, Netflix, and dozens of others in Silicon Valley, have come forward to report discrimination, bullying, ostracization, and even sexual harassment by colleagues who are higher-caste Indians”.

Although the CISCO engineer’s case is the first time in US history that caste has been at the center of a discrimination case, it has been brought to the American court system’s attention before. In 1913, an immigrant from Bengal applied to become an American citizen, which, at the time was only granted to whites. A.K. Mozumdar argued that being a “high-caste Hindu” of “Aryan descent”, he was essentially white. His arguments were accepted, and he became the first South Asian American to become a US citizen. However, when a decade later another Indian, Bhagat Singh Thind, claimed “whiteness” by arguing that as a brahmin he “regards the aboriginal Indian Mongoloid in the same manner as the American regards the negro, speaking from a matrimonial standpoint”.

His claim was, however, rejected, and because of that, A.K. Mozumdar was stripped of the US citizenship he’d received 10 years earlier. The 1965 Immigration and Nationality Act subsequently overturned restrictions based on race and color in the United States, and many thousands of Indian, Pakistani and Nepali applicants were able to become citizens.

It’s hard not to see that the Indian caste system, which is deeply rooted and systemic in nature, shares lots of similarities with racism in the US.

It persists through cultural notions across borders even after legal discrimination was abolished. While Black people face unequal treatment because of their skin color, Dalits face persecution because of the class they were born into. And although conditions have improved for both Black Americans and Dalit Indians, allowing them to attain some upward social mobility, both are still more likely to be discriminated against. 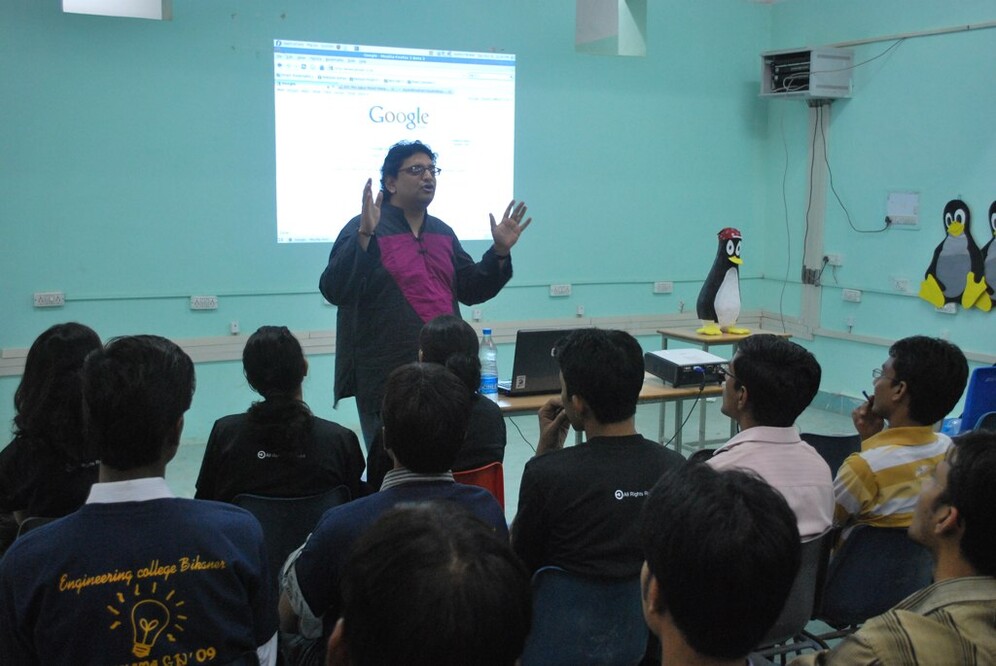 Dalit apartheid, as Equality Labs calls it, is an issue wherever you find South Asian communities and needs to be addressed both by their members and local legislation. “If Hindus migrate to other regions on earth, Indian Castes would become a world problem,” said B.R. Ambedkar, a Dalit leader and one of the architects of India’s Constitution. In 2018, the UK, with its 1.5 million-strong Indian community, decided not to enact a law on caste discrimination among Indians, whereas back in 2013, the European Parliament adopted a resolution condemning casteism.

There is still no single approach to the problem, although many have acknowledged that is global in nature.

Because, unlike race, sex and religion, caste is not a protected category under federal or state laws in the USA, there’s no way of knowing how the discrimination lawsuit filed by a CISCO employee against his company will end. The case is still pending but if the court rules against Cisco, it could set a precedent and have ramifications for all American companies with Indian employees and, perhaps, change the way Dalits are treated within their communities.