How ‘the father of PR’ Edward Bernays engineered consumerism in America
Parler, a “free speech haven” banished from the web, is working on a comeback

Radium girls: An ugly story behind a beautiful watch

Radium Girls were female factory workers who contracted radiation poisoning from painting watch dials with luminous paint. The paint made the watches glow because it contained radium, a radioactive element that was incredibly dangerous to humans. To apply the paint to the tiny dials, the women were instructed to dampen the brushes with their lips. The radium they ingested by licking brushes caused irreparable damage to their health.

Radium was discovered by Nobel laureate Marie Curie and her husband Pierre in 1898. It was received with much hope and expectation, and was quickly put to use as a cancer treatment. A 1921 advertisement for Undark, a product of the Radium Luminous Material Corporation that was involved in the Radium Girls scandal./Public Domain

In addition, radium became an additive in a number of everyday products, from toothpaste to cosmetics and even food and drinks. One of those products was called Radithor - simply distilled water with tiny amounts of the substance dissolved in it. It was ubiquitously advertised as "A Cure for the Living Dead" and "Perpetual Sunshine”, promising to tackle various ailments, from arthritis to gout.

This brings us to one of the most devastating effects of the radiation craze: The Radium Girls. [7/16] pic.twitter.com/4QbxCYlHN5

However, radium was not a panacea. In fact, it was rather deadly. American socialite and athlete Eben Byers acquired notoriety not for his sports achievements, but for how he died.  He’d been drinking a bottle of Radithor every day for years — and not surprisingly, died from it in 1932. The story about the unfortunate radium victim came out in the Wall Street Journal under the title "The radium water worked fine until his jaw came off."

A century ago, in the early 1920s, glow-in-the-dark watches were an irresistible novelty. The dials, covered in a special luminous paint, shone all the time and didn't require charging in sunlight. It looked like magic. Around that time the world was already becoming aware of the risks of radioactivity. But radiation poisoning wasn't immediate and it didn’t raise concerns right away. Years went by before any of the workers developed symptoms.

One of the first factories to produce these watches opened in New Jersey in 1916. It hired about 70 women, the first of thousands to be employed in many such factories in the United States. It was a well-paid and rather glamorous job.

Eventually, some of the employees of the United States Radium Corporation started developing symptoms like fatigue and toothaches. The first death was recorded in 1922, when 22-year-old Mollie Maggia died after reportedly suffering for almost a year. Although her death certificate suspiciously stated that she died of syphilis, she was actually suffering from a condition called "radium jaw”, just like Eben Byers. The woman’s entire lower jawbone had become so fragile that her doctor removed it by simply removing it. "The radium was destroying the bone and literally drilling holes in the women's jaws while they were still alive," said Kate Moore, the author of The Radium Girls (The Dark Story of America's Shining Women)

Yet it would take another two years before the company that owned the factory, the USRC, took any action. Even so, the investigation was mostly run to inspect the declining business rather than the health of the workers.

The pursuit of justice

In 1925 Grace Fryer, one of the workers from the original New Jersey plant, decided to sue the company. She spent two years searching for a lawyer who was willing to help her. She finally filed her case in 1927 along with four fellow workers, and made the headlines all over the world.

The case was settled in the women's favor in 1928, by this time, the dangers of radium had become fully acknowledged, the deadly habit of licking the brushes was abolished and the workers acquired protection. More women filed lawsuits, and, though the radium companies appealed several times, in 1939 the Supreme Court rejected the last appeal. 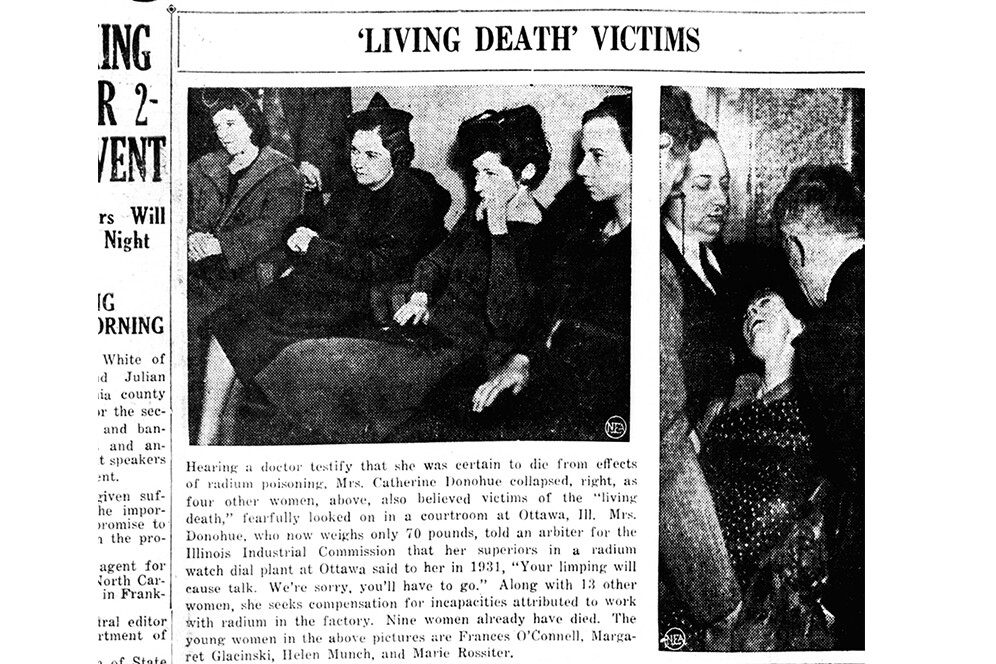 The survivors received compensation, and death certificates started reporting the correct cause of death. The year prior to that event, the Food and Drug Administration banned the misleading labeling of radium-based products. Radium paint itself was eventually phased out and has not been used in watches since 1968.

It's hard to calculate exactly how many women suffered from health problems due to the ingestion of radium, but there were thousands of them. Some of the effects were noticed much later in life through various forms of cancer. With a half-life of 1,600 years, once the radium was inside the women's bodies, it was there for good.

Still, the tragic yet very helpful legacy left by Radium Girls laid the foundation of the occupational hazard section in the labor law and contributed a lot to the scientific research of the radioactive materials.

It was only a matter of time before the Radium Girls would be represented in popular culture. Lots of creators used this story in their oeuvre, but the most significant works are Kate Moores’ book "The Radium Girls” and a motion picture under the same name released in 2018.