Trump vs Biden: Did social media tip the scale?

America has chosen Joe Biden to be the 46th president of the United States after, perhaps, one of the most contentious presidential races in recent US history. The result was unclear until November 7th — four days after votes were cast — and the neck and neck race made for an extremely tense election. One thing for certain is that social media played a significant role. The global pandemic pushed many activities online, campaigning and rallying included. The 2020 presidential race was turned into a social media battle. Every American with a smartphone was showered with political ads, posts incriminating the candidates and pleas to vote.

Both Biden and Trump put a lot of effort into winning. According to one of the most influential social media marketing analysts, at the start of the campaigns, Trump had more than 30 million followers on Facebook and 85 million on Twitter. In contrast, Biden had just under three million on Facebook and just over nine million on Twitter. So, Biden’s main task was to grow his audience and at the same time reach as many people as he could without an extensive social media following. These figures alone demonstrate how important social media platforms were for Trump and how much he should have relied on them as a tool for furthering his political views.

While the candidates did their best to reach out to their audiences, Facebook, Twitter, and other social platforms worked hard to contain the swell of misinformation.

Because of the 2020 US Presidential elections, leading social media platforms began planning for the worst. And this time around, unlike in 2016, it wasn’t alleged foreign influence campaigns bothering them the most, but rather internal threats. With more than ever, Americans voting by mail, delay in election results was to be expected, which could, in turn, enable conspiracy theorists and launch a misinformation pandemic on par with COVID-19. 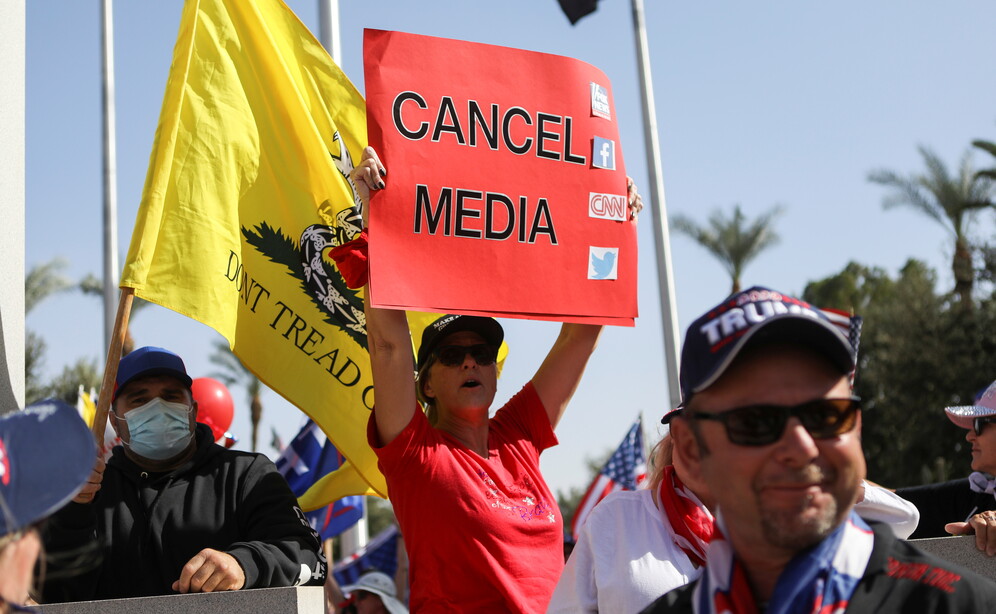 Supporters of U.S. President Donald Trump gather at a “Stop the Steal” protest after the 2020 U.S. presidential election was called for Democratic candidate Joe Biden./REUTERS by Jim Urquhart

On October 29th, in his call reporting Facebook’s third-quarter earnings, Mark Zuckerberg warned Americans of the possibility of some nightmare scenarios following the election. He said “I’m worried that with our nations so divided and election results potentially taking days or weeks to be finalised, there is a risk of civil unrest across the country. Given this, companies like ours need to go well beyond what we’ve done before”. He said Facebook wouldn’t take any new political ads in the week before November 3d but would run those already paid for, as “in the final days of an election there may not be enough time to contest new claims.” However, the new ad policy implementation didn’t go too smoothly, with both political parties reporting blunders with some of their ads.

One way or another, since his nomination, Biden was the tech sector’s favourite.

Silicon Valley heavy hitters have been at odds with the Trump administration over many issues, including immigration restrictions that undermined the US tech sector’s ability to cherry-pick the best employees from around the world, and content moderation. It’s not surprising then they introduced measures aimed at halting the spread of misinformation which somewhat stifled the Republican campaign.

Experts suggest the failure to curb stories related to Hillary Clinton’s leaked emails and alleged attempts at election meddling in 2016 might have cost Democrats the presidency. This year the tech giants were extra cautious regarding what election information should be shared on their platforms. Accused of letting the Republican cronies use Facebook et al. as tools to manipulate the 2016 election, the tech companies introduced new policies, that could have played an inevitable — if not a decisive – role in Biden’s victory. 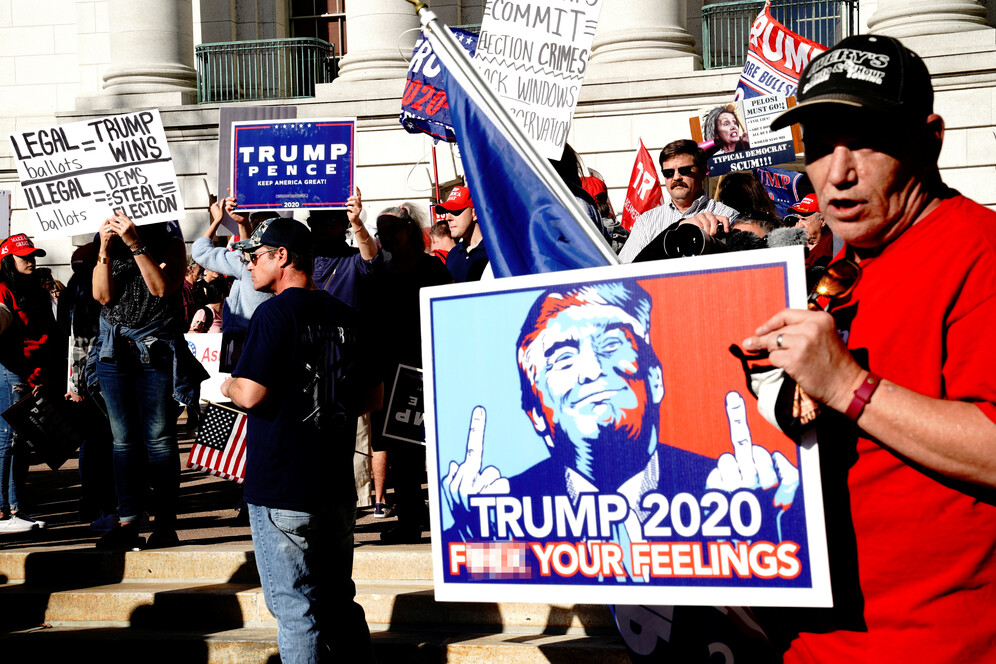 First came Twitter’s decision to fact-check and earmark one of Trump’s tweets  five months before the election. Doing so made it a target of conservative accusations. That was the first instance the label “misinformation” was appended to a tweet by the American president. Soon after this unprecedented step, Trump tweeted: “Big Tech is doing everything in their very considerable power to CENSOR in advance of the 2020 Election. If that happens, we no longer have our freedom. I will never let it happen! They tried hard in 2016 and lost. Now they are going absolutely CRAZY. Stay Tuned!!!” Well, indeed, that was only the start of it.

Even to the naked eye, the fishy material looked like a deliberate misinformation leak aimed at discrediting Joseph Biden. Within hours Twitter banned all links to the article and locked the accounts of users who shared it. Quoting distribution of hacked materials as the reason for the unusually harsh measure, Twitter came under criticism for interfering with its users’ freedom of speech.

Earlier, Andy Stone, Facebook’s policy communications manager, said “…the story is eligible to be fact-checked by Facebook’s third-party fact-checking partners. In the meantime, we are reducing its distribution on our platform.”

The Big Tech has been repeatedly accused of silencing right-wing voices, and this move fuelled those claims. The New York Post accused social networks of bolstering the Biden campaign in an editorial claiming “Facebook and Twitter are not media platforms. They’re propaganda machines”. “Censor first, ask questions later: It’s an outrageous attitude for two of the most powerful platforms in the United States to take”, it added. Is it, in fact so? Well, it depends on one’s perspective. But if you’re a Republican, it may certainly look that way.

This is a Big Tech information coup. This is digital civil war.

I, an editor at The New York Post, one of the nation’s largest papers by circulation, can’t post one of our own stories that details corruption by a major-party presidential candidate, Biden. pic.twitter.com/BKNQmAG19H

In a tweet Senator Josh Hawley accused Twitter of trying to “hijack American democracy by censoring the news & controlling the expression of Americans”, and the Republican National Committee filed an FEC complaint against Twitter, accusing the company of illegally contributing to Joe Biden’s presidential campaign by stopping Twitter users from posting links to the Post story.

It has also been widely noted that a similarly hard-hitting story on Donald Trump’s tax returns run by the New York Times didn’t face any scepticism on the part of either Twitter or Facebook.

Even though Jack Dorsey, Twitter’s chief executive, acknowledged the platform should have explained its actions sooner, saying “Our communication around our actions on the @nypost article was not great. And blocking URL [website link] sharing via tweet or DM [direct message] with zero context as to why we’re blocking: unacceptable”, several Republican officials accused Big Tech of crossing the line and insisted they should be held accountable. 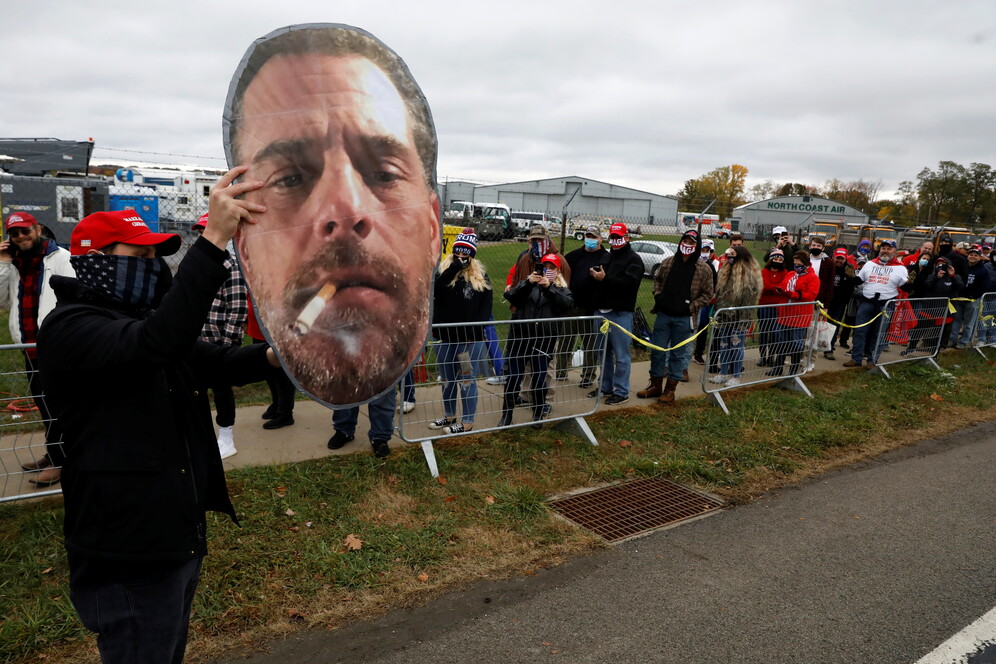 A supporter of U.S. President Donald Trump holds up a photo of Hunter Biden for fellow supporters as they wait in line to attend Trump's campaign event at Erie International Airport/REUTERS by Brendan McDermid

YouTube, on the other hand, faced fewer high-profile problems than Twitter and Facebook. All YouTube videos about election results included a label that said the election might not be over and linked to a Google page with results from the Associated Press.

An ultra-tight race between the candidates made social media platforms brace themselves before the 2020 election like they never did before. In an attempt to prepare for the worst-case scenarios, they were determined not to let any viral conspiracy theories and misinformation spread, especially given that the nation was split politically and overwhelmed by the ongoing health crisis. A particular emphasis was made on the candidates’ possible attempts to declare premature victory or accuse the other party of fraud. 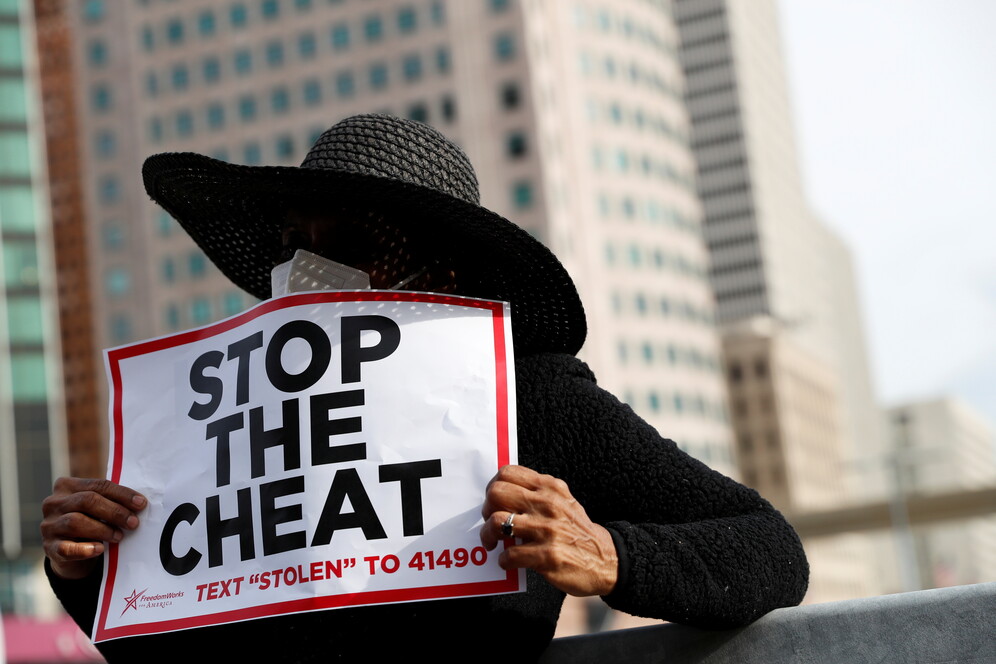 A demonstrator hols a sign as votes continue to be counted following the 2020 U.S. presidential election, in Detroit, Michigan./REUTERS by Shannon Stapleton

As President Trump has repeatedly signalled he wouldn’t accept the results of the election should he lose, Facebook and Twitter laid out detailed plans in case the election results aren’t immediately clear and/or one of the candidates contests its outcome.

On October 9th Twitter expanded its civic integrity policy, by adding a clause. It read “label tweets that falsely claim a win for any candidate and will remove tweets that encourage violence or call for people to interfere with election results or the smooth operation of polling places”.

More specifically, it meant that candidates were not allowed to claim victory before the state election officials declared it.

Indeed, while the votes were still being counted in many states, Donald Trump posted several tweets announcing his win, but they were soon labelled as misleading and deleted by the platform. As passions continued to run high, allegations the Democrats were trying to usurp the vote surged under the hashtag #StopTheSteal throughout election day. The tone escalated when Trump appeared before cameras on November 4th to assert “we did win this election.” “If you count the legal votes, I easily win. If you count the illegal votes, they can try to steal the election from us.”

Joe Biden, on the other hand, said there was “no doubt” he would be elected the 46th US president. As competing pronouncements were being made, the Electoral College still tallied 253 for Biden and 214 for Trump. 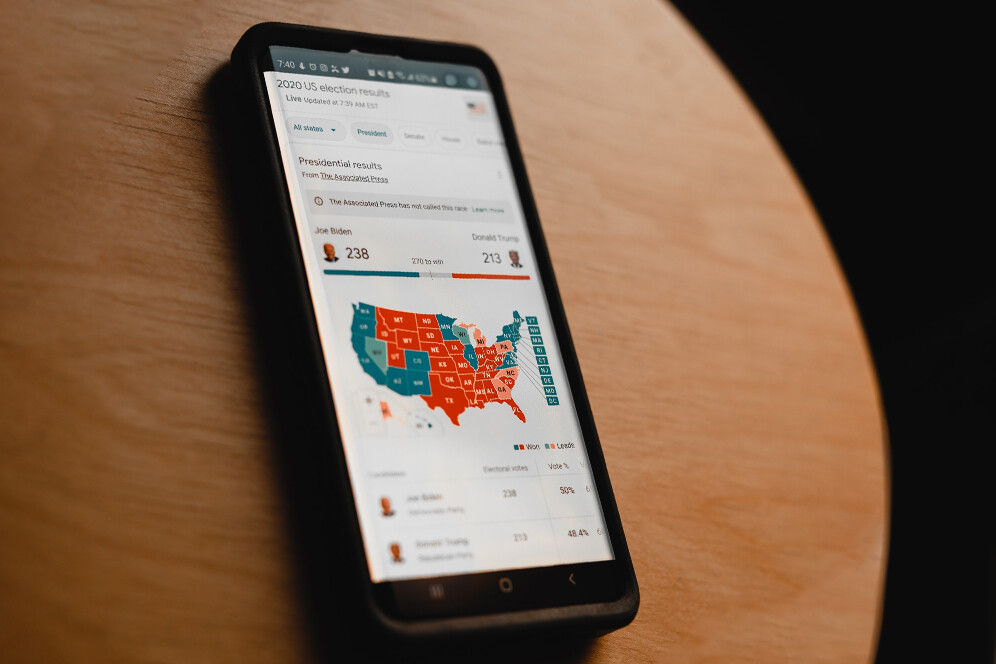 Following the elections, as the results from several battleground states were still coming in, Facebook removed the fast-growing group ‘Stop the Steal,’ whose organisers alleged widespread voter fraud. In less than 24 hours, it had accumulated more than 360,000 members but was deleted on the grounds of trying to delegitimise the election process.

Questioned if such steps undermined Facebook’s allegiance to free speech, Zuckerberg replied: “This is not a shift in our underlying philosophy or strong support of free expression. Instead, it is a reflection of the increased risk of violence and unrest.”

On Saturday morning the Associated Press called the presidential race for Joe Biden. But the incumbent president doesn’t seem to be ready to let go. If he refuses to concede, it will mean another round of tug-of-war for the country that is no less divided than it was before the election. Several major media outlets reported the Trump campaign is planning to hold rallies in support of potential recounts and ongoing litigation. This means social media will remain abuzz and could easily fan the flames of possible post-election nightmare scenarios.

Although CEO’s of social media giants have repeatedly said their platforms aren’t biased against conservative news or that they favour one side of the political debate over another, their tremendous role in the political process is hard to overestimate. A recent survey from Pew Research Center indicated that 90% of Republicans and some 59% of Democrats believed social media sites censored political viewpoints. Since any moderation could be viewed as an attack on free speech, by denying someone the right to post, you’re making a political call. And these days social media companies are making quite a few of such calls capable of tipping the scale – especially in an election we’ve recently witnessed, where the winner led the national vote by less than three per cent.