“I live in a community, we're interested in protecting it in a peaceful manner” - Diary of a New Yorker on anti-looting patrol
Dancing in my sleep: a story of gruesome and popular entertainment during Great Depression

Composting: A sustainable way of death

The State of Washington has adopted a law this May, adding composting to the range of permissible burial options. Although less unorthodox than, say, a Tibetan ceremony of having a dead body fed to wild animals and birds of prey, it is still an unconventional solution for the western world.

Though the idea might appal those who believe in being able to rest in a proper grave or having one's ashes stored on the mantelpiece of the family home, composting has struck a chord with those striving for a greener afterlife.

With innovations embracing all aspects of our lives, burials were the last frontier unchanged for centuries. It wasn't meant to stay this way forever. Katrina Spade, an American architect-come-entrepreneur, came up with a more sustainable funeral process. It took her ten years to make it legal, but now it's only a matter of months before the first facility for "natural organic reduction", as she calls it, will open its doors in Seattle.

Spade's company Recompose uses a patented technology dubbed "recomposition" to convert human remains into fertile soil. A pilot study at Western Carolina University (WCU) demonstrated that the method allows a body to be processed entirely except titanium implants or gold teeth — within 4 to 7 weeks.

Some find the method disrespectful since it involves a procedure similar to the processing of food waste and animal carcasses. Almost, but not quite: the remains are put into an enclosed hexagonal steel container filled with wood chips, alfalfa and straw, that maintains the right temperature and aeration and slowly rotates to help microbes do their job.

The family gets a sizeable container (one cubic yard, which is almost four wheelbarrows!) of fluffy pleasant-smelling soil that they can use in a garden for nurturing flower beds and trees or scatter in a forest.

The technological protocols for "recomposition" were developed by a soil scientist Professor Lynne Carpenter Boggs who is confident the 55C temperature needed ensures the destruction of the vast majority of pathogens and trace pharmaceuticals rendering the end-result safe for humans and the environment. So individuals who suffered from prion disease, like Creutzfeldt-Jakob (i.e. "mad cow disease") would be the only candidates unsuitable from this type of burial.

The future of death care is just around the corner. 🌱

Environmentalists endorse the ingenious solution, because, if universally adopted, it will save thousands of tons of harmful chemicals used for body embalming and cut down on greenhouse emissions from crematoria. Plus, think about the ever-growing urban cemeteries whose land could otherwise be used to grow crops or build homes.

Ethical and cultural issues of passing are the toughest aspects to tackle when it comes to unconventional funerals.

Even having a revolutionary approach to treating human bodies, Recompose remains traditional when it comes to honouring the memory of the dearly departed. The ceremonial aspect remains similar to what you'd expect from a memorial service at a funeral home. A body shrouded in a piece of linen will be put out in a crate that resembles a casket filled with wood chips in an open area where family and friends could gather to pay their respects. The design concept for the new facility by American firm Olson Kundig Architects evokes the imagery of what looks more like a museum of modern art, airy and green, than a grief-filled funeral home of the past.

This helps to strengthen our relationship to the natural cycles while enriching the earthhttps://t.co/ChnisLFiFD @recomposelife #regenerative #sustainability #ethoslifestyle

The project architect Alan Maskin says its purpose is to "foster a more direct, participatory experience and dialogue around death and the celebration of life".
Until recently, options in the US for those wishing to "return to nature" after death were limited. Skipping embalming, choosing a biodegradable casket or forgoing it all together are among the few. Although these tweaks in conventional burial practices may sound minor, they do help a lot. According to the Green Burial Council,

Each year traditional burials in the US put 20 million ft. of wood, 4.3 million gallons of embalming fluids, 1.6 million tons of reinforced concrete, 17,000 tons of copper and bronze, and 64,500 tons of steel into the ground.

If you find the thought of your body decomposing revolting and would instead go up in flames, like the majority of Americans these days, bear in mind a conventional cremation isn't environmentally friendly. Its carbon footprint has been calculated to be the equivalent of a 500-mile car journey. In this case, one might consider a so-called "bio-cremation" or "aquamation" through alkaline hydrolysis. It is a more environmentally-conscious option, as it has a carbon footprint only one-tenth of what fire-based cremations produce. Unlike traditional cremation that uses extreme heat, it uses an alkaline solution heated to around 300 F to bring a body to a state it would naturally reach after about a hundred years if buried underground. At the moment, aquamation is legal in only 19 states but is slowly gaining traction as more funeral homes are starting to offer it.

Exotic choices, like burials at sea, in biodegradable burial pods offered by Italian company Capsula Mundi, or in "mushroom suits" by Coeio recently made famous by actor Luke Perry who requested to be buried in one, are unlikely to become mainstream any time soon. Still, the shift in the way modern society feels about treating their dead is quite tangible. By 2035, when the generation that now opts for wild salmon and hybrid cars will be faced with choices about funerals, the NFDA (National Funeral Directors Association) predicts only 15% of Americans will go for traditional burials — that means, by entombment or cremation. 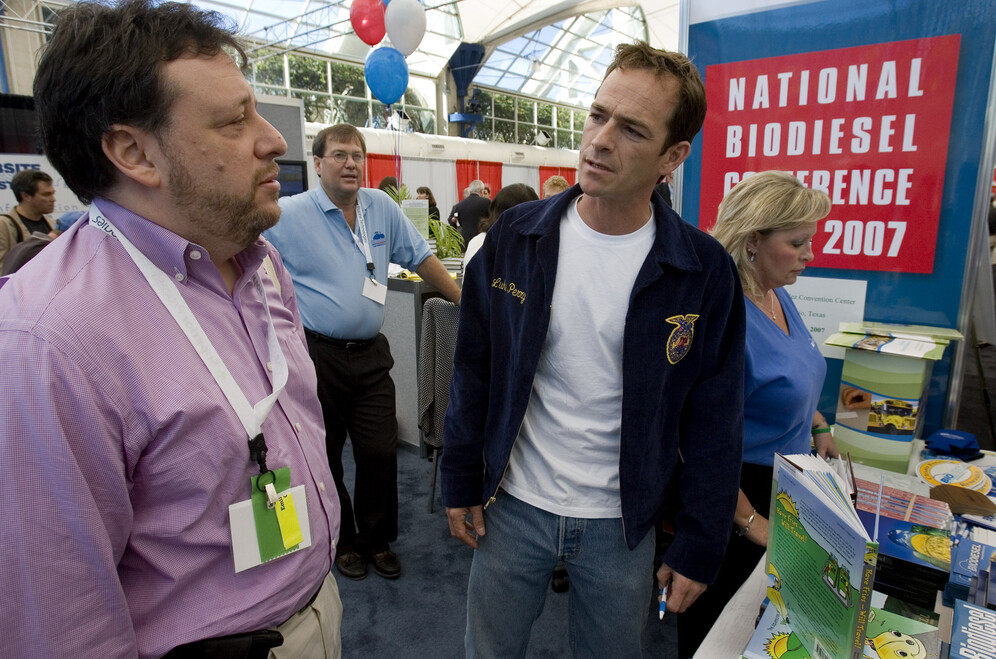 Actor Luke Perry at the Sustainable Biodiesel Summit in San Diego in 2006. Perry was convinced that the vegetable oil based fuel technology will allow US farmers to save the world/REUTERS by Fred Greaves

While bills on body composting are currently moving through the Colorado and California legislatures, other eco-friendly and natural burial options are gaining momentum. Among them is choosing a rural cemetery instead of an urban one. Set up on private estates, these wooded natural landscapes aren't anything like the over-regulated manicured urban sites and allow for simpler burial practices used by our ancestors. Strange as it may sound, burial sites also protect rural areas from development, thus contributing to the conservation effort.

The cost of a "green burial" is considerably lower than the national median price of a funeral reaching upward of $9,135. 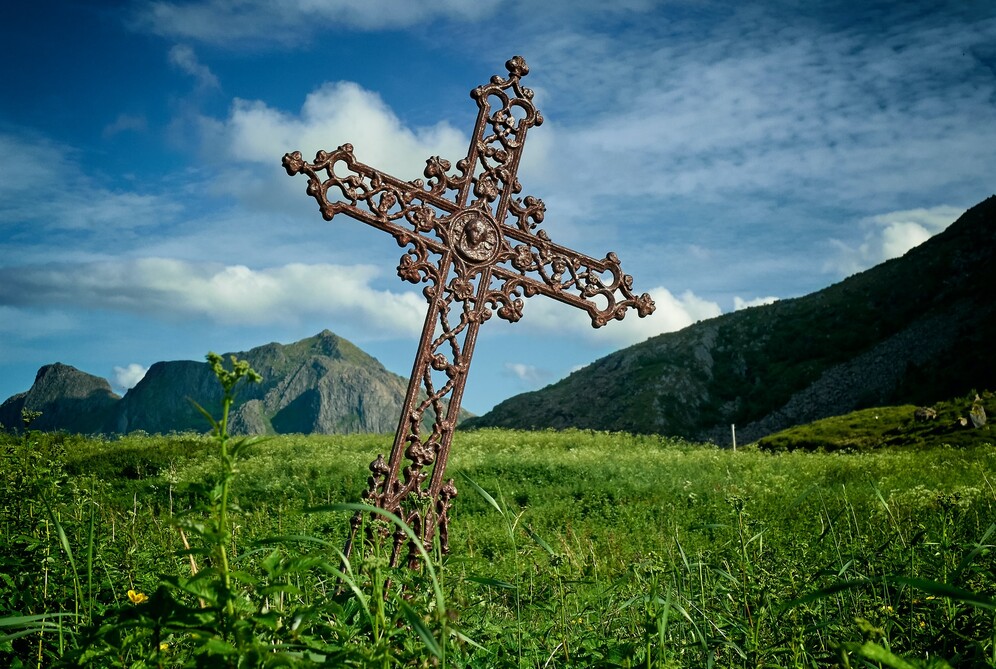 Unfortunately, many urban dwellers, who'd have to travel a hundred miles to bury a loved one closer to nature, can't afford this option/Vidar Nordli Mathisen via Unsplash

As human composting activist Nina Schoen, a Seattle media tech executive, puts it, "natural burial is quite wonderful, but as the population increases, there is less available land, and that's to me why having an option like recomposition is so essential". Being one of the most eco-conscious and unchurched states, Washington may have broken ground on a practice that is presently causing more than a few raised eyebrows — just like cremations did in the late 19th century — but will soon become widely accepted, as conventions around death, memorials and rituals are all being challenged.