Police unions face backlash for opposing reforms
Godzilla sandstorm heading for the US: the bad, the good and the pretty

Free Angela Davis: How a 1970s black American civil rights advocate made the world fall in love with her

What is the story of the educator, scholar and writer who went through the horrors of segregation and wrongful imprisonment to become a role model for civil rights activists all over the world?

Born in Birmingham, Alabama in 1944, Angela Davis grew up in a middle-class African-American neighbourhood known as "Dynamite Hill". It earned the name due to frequent bombings by the Ku Klux Klan. She was lucky to be born in a somewhat well-off family of a small business owner and a teacher but experienced all the evils of segregation in America's Deep South.

A group of African Americans viewing the bomb-damaged home of Arthur Shores, NAACP attorney, Birmingham, Alabama on Sept. 5, 1963/By Marion S.Trikosko via The Library of Congress

Talking to The Guardian,  Dr Davis recalled how her mother, also an activist, explained how segregation worked, “She continually told us that things would change, and that they would change, and that we could be a part of that change. So I learned as a child to live under racial segregation, but at the same time simultaneously, to live in an imagined new world and to recognise that things would not always be as they were.” 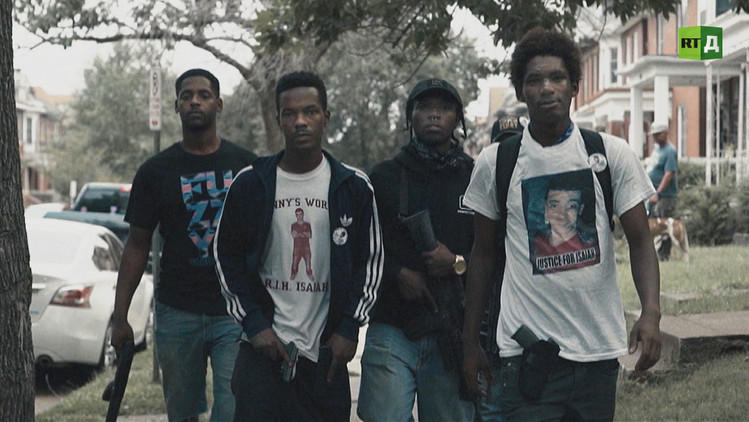 That's why, still at school, Angela organised interracial study groups and even read Marxist ideology.Her political views only strengthened as she joined radical left youth groups at Brandeis University in Massachusetts. It was there she first came across the teachings of neo-Marxist philosopher Herbert Marcuse, who, in her own words, inspired her to combine the job of an activist, a researcher, and a revolutionary.

Angela's trip to Europe in 1963 brought her even closer with a range of progressive schools of thought. She attended the 8th World Youth Festival in Helsinki, did an internship at the Sorbonne focusing on Sartre and Kamus, and mastered in social studies at the Goethe University of Frankfurt. She didn't give up her political agenda and frequented meetings of the German Student Fight for your Rights campaign.

Erich Honecker, General Secretary of the Socialist Unity Party of Germany, receives Angela Davis in 1972. During this encounter, he presented her with the invitation to the 1973 World Festival of Youth and Students in the East Germany capital/by Peter Koard courtesy of German Federal Archive.

However, social unrest and the black civil rights movement were gaining momentum in the United States, which couldn't leave Davis unfazed. Her native Birmingham witnessed a violent church bombing in September 1963. The church consisted of mostly black congregations and was a civil rights activist meeting point. In 1968, Dr Martin Luther King was assassinated.

Along with nationwide trials and tribulations, Davis had to go through her own personal predicament. After she joined the American Communist Party, her academic career at the University of California, Los Angeles, was cut short by then-California Governor Ronald Regan. Angela dared to fight the decision in court, she won and was reinstated at the university, but still left when her contract expired and wasn't renewed in 1970. 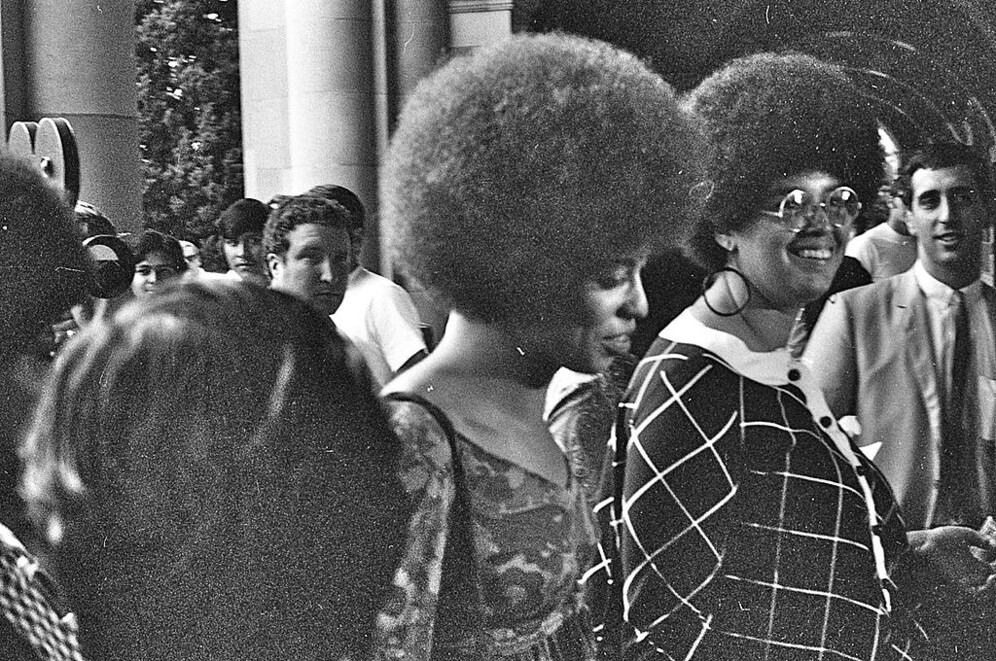 Angela devoted all her time dealing with cases of social injustice and violence towards black people. In the line of her work, she came across the Black Panthers groups and had an affair with one of the group's activists George Jackson. 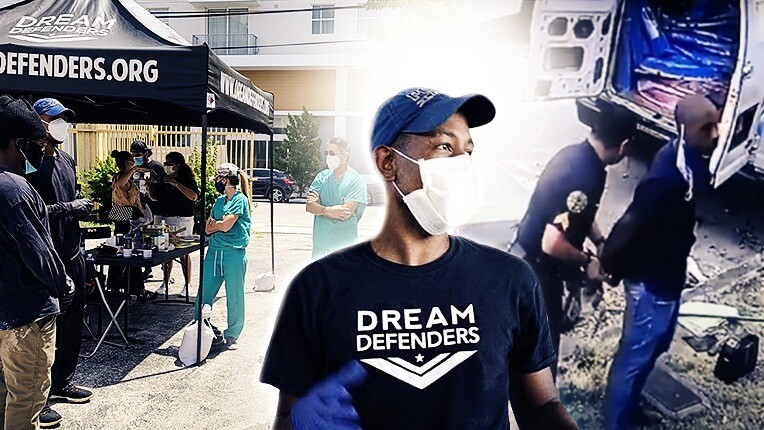 When Jackson and three of his friends were tried for attacking police, Jackson's 17-year-old brother Jonathan broke into the courtroom hoping to free the arrested by taking the judge hostage. This raid ended in tragedy, as Jonathan Jackson, Superior Court Judge Harold Haley, and two inmates were killed in the crossfire of the ensuing shoot-out.

Though Angela wasn't present at the hearing, she was accused of aiding and abetting hostage-taking and conspiracy. The gun Jonathan used was registered to Angela, and so was another weapon, allegedly used by George Jackson to attack the police.

George later died in prison under suspicious circumstances, and Davis was arrested and sent to jail, where she stayed for 18 months.

Unexpectedly, those were precisely the 18 months that brought her worldwide fame. She became a revered and famous political prisoner in the United States for her ideas and questionable charges. The Soviet Union, in particular, watched the trial enthralled. 'Free Angela' chants were shouted during rallies, at factories, in pioneer scout gatherings and university auditoria in Russia. Angela became a civil rights icon for the Soviet people and the rest of the Socialist Bloc. She received millions of supporting letters and rallies in her honour rolled through Europe and America. For America, Angela was the symbol of radical freedom from militarism and racial, social, gender injustice as opposed to the terrorising and stifling politics of the Nixon administration.

John Lennon immortalised her in his 1972 song Angela, and The Rolling Stones composed a single Sweet Black Angel in her honour.

The worldwide effort had an effect, and in June 1972 an all-white jury fully exonerated Davis.

Angela resumed her work for the US Communist Party and ran for Vice-President together with the party's chairman Gus Hall in 1980 and 1984.

She's been to many European countries and several times visited the USSR. During her second stay in 1980, she met Soviet leader Leonid Brezhnev. In the Soviet Union, Davis was considered a friend on the other side of the Iron Curtain. She was even awarded the Lenin Prize.

She was asked to move to the Soviet Union, but she insisted on being closer to home where she said the oppressed people would need her help more. In the late 1980s, her popularity subsided, but she went on working as a human rights activist and scholar. In 1991, she became disillusioned with the Communist Party and left, condemning its inactivity and empty promises.

As a scholar, Davis is still involved with human rights issues, her primary focus being protecting women and prisoners. After she came out as a lesbian in 1997, she added LGBTQIA rights to her list.

She is a distinguished professor emerita at the University of California, Santa Cruz, and founder of Critical Resistance, a grassroots organisation campaigning to end imprisonment, which, according to her, will solve society's problems. She authored several books, including an autobiography, Are Prisons Obsolete? (2003) and Abolition Democracy (2005). 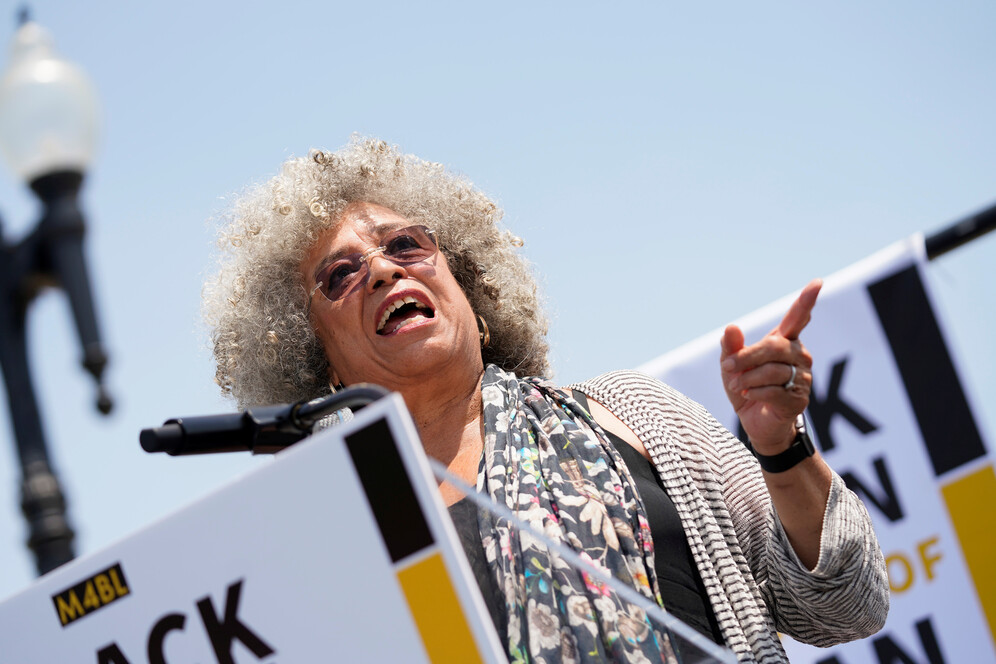 Davis still lectures at universities, dealing with issues of race, the criminal justice system and women's rights. In 2017, she spoke and was made an honorary co-chair of the Women's March on Washington following Donald Trump's inauguration.

She hails the diversity and the scope of the current #BLM campaign, which goes far beyond the usual blowback from the police violence cases. But even more, Davis wants to make sure women's contribution to the civil rights struggle is appreciated, and the press covers female victims of police violence like Breonna Taylor similarly to males. In an interview with The Guardian, Dr Davis said, "I think it's important to understand why this tendency towards masculine representations of struggle happens, and why we fail to recognise that women have forever been at the centre of these struggles, whether as victims or organisers."