She’s always had an old face, but Katya Nezhentseva’s ‘Benjamin Button-like’ appearance isn’t stopping her from living life to the full. In Russia, she’s become an inspiration, proving success in life isn’t just down to one’s looks, but about what you make of yourself.

Katya Nezhentseva stood out in school because of her skin condition, cutis laxia, but she learnt to reach out to hters and the children quickly got used to her. A still from The Curious Case of My Face.

When Katya was born 25 years ago, she had the wrinkled face of an old woman. A few months later, she was diagnosed with progeria, a condition where all the body ages prematurely. Doctors told Katya’s mother she only had a few years to live.

However, the child confounded expectations. As it turns out, only the skin on her face is affected, but otherwise, her body is that of a girl her age. She’s been given a new diagnosis of cutis laxa or “loose skin disorder”, a condition thought to affect one in a million people, with 400 cases reported worldwide. 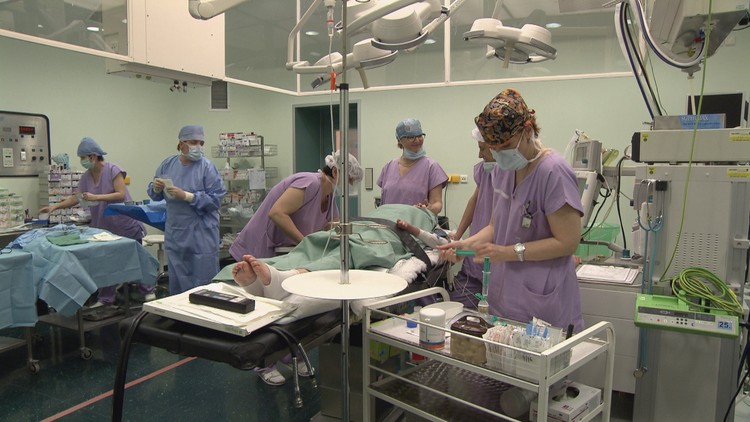 Her main problem is not her body but the reaction to her appearance in others. Her father, unable to come to terms with the less-than-perfect baby he had expected, deserted his family when she was four years old.

Katya's mother was determined her child would be a full member of society and fought so her daughter would grow up well-adjusted. The little girl attended kindergarten in her village, where all the children knew her and didn’t pay much attention to her unusual face.

However, when she started primary school, the children who didn’t know pointed fingers at her. Katya told her mother about what happened. “Then Mum went to school, and after that, everything was fine”, the young woman told the TV programme One-to-One with Everyone, in 2017. “My Mum’s a fighter, and I’m the same”, she explained.

“Everyone is the same, but she is unique”

her mother used to say. For Katya, people with her condition are “no different to anyone else”, except “they’re even better than ordinary people. At least, the people I know are more humane, they aren’t cruel, they’re understanding and compassionate. Their character is difficult to break.”

As a result, she’s never had complexes about her appearance and never been withdrawn. Quite the opposite: she has a large circle of friends and was popular at school.

Katya Nezhentseva speaks in the deep voice of a mature woman, dispensing wisdom that belies her years. She gave RTD advice for those struggling with low self-confidence. “In our society, an awful lot in a person’s life depends on the opinions of unrelated people”, Katya counselled. “My advice is, don’t listen to the opinions of others, and live the way you want to yourself. Because, if you start listening to unrelated people, you won’t be living your own life”. Advice she never seems to lose an opportunity to practice herself.

Plastic surgery gave Katya a more youthful appearance in her late teens, but it's not an experience thinks is worth repeanting any time soon. Still taken from The Curious Case of My Face.

Katya had two ambitions in life: to get plastic surgery and to get married. At 16, she underwent surgery, and by 18 she was married with a child on the way. “When I set myself a goal, I try to accomplish it.” This was not the end of the story, however. As it turns out, successes can bring with them new sets of problems.

As a teenager, she wasn’t unhappy with her appearance, but she wanted to give plastic surgery a go,” to see what it was like”. After her first TV appearance, Katya raised enough money for a skin tightening procedure that gave her a face closer to her real age. It’s not an experience she’s looking to repeat, because of the physical and psychological toll of the operation. Her conclusion:

As for relationships, it’s complicated. In spite of her much older face, boys her age showed interest in her. Katya met her husband, who is ten years older, by chance, after he’d dialled a wrong number. Several phone conversations later, they decided to go on a date. She hadn’t told Denis about her condition, and he didn’t comment.

Their second son, Misha, has the same condition as his mother: “He’s the heart and soul of the party”, his mother told RTD, “I’ve never seen anyone have a negative or even neutral reaction to him”. Just as her own mother fought for her, Katya fights for her children.

Both of Katya's sons are her pride and joy, and now she is focusing on helping them learn the lessons life has taught her. Credit Ekaterina Nezhentseva

Sadly, after four years of marriage, the pair split up. Katya blames her husband’s heavy drinking and his physical violence towards her for breaking up the marriage. Her husband claimed the younger son wasn't his, but a DNA test proved it was actually the older child who had another father.

Find out more about Katya and other sufferers of loose skin disorder in our documentary The Curious Case of my Face.