This 46 metres long 350mm canon incited fear. It could fire extreme distances challenging all existing guns, sending projectiles thousands of kilometres into enemy territory. After the fall of Saddam Hussein, the UN Commission ruled to confiscate and destroy the supergun due to its potential danger, even though it was never finished. The question remained — where exactly was Baghdad aiming?

Only one man knew the howitzer’s real purpose. It was initially designed to launch satellites into Earth orbit and assert the dominance in space that rockets once had. The canon’s creator was a prominent Canadian ballistics scientist, who staked everything to be recognised in space engineering, but was assassinated instead. 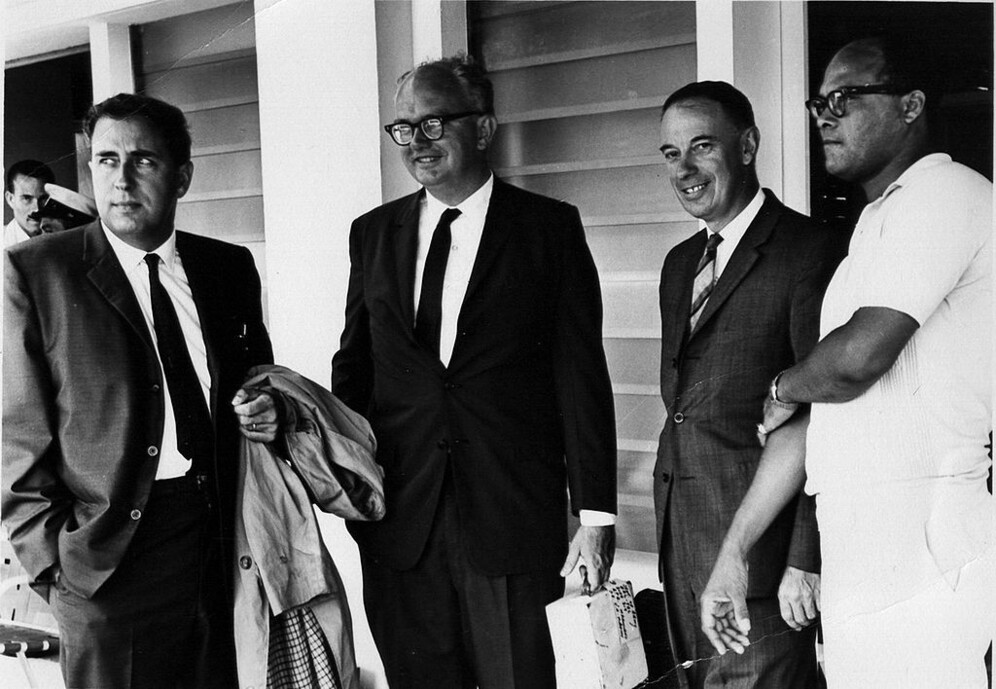 The man’s name was Gerald Bull. He was born in North Bay, Ontario, in 1928 into a big family. Dubbed “Boy Rocket Scientist” by Maclean’s magazine, Gerald was praised for his creativity and technical prowess.

“Bull was an outstanding scientist and a charismatic figure, and this is the physical reminder of what he did on a monumental scale,” says Nicholas Hall, Keeper of Artillery at the Royal Armouries.

Bull started his career working for Canadian and US governments and studying supersonic flight and artillery. His first employer was the Canadian Armament and Research Development Establishment (CARDE). A talented engineer, he came up with an idea to research supersonic speeds using heavy artillery. His point was that supersonic wind tunnels for test models were too expensive to build, while the same results could be achieved with a large gun. His project was funded, and it ran until 1956.

In the 1990s, The New York Times published the story of Bull’s mysterious encounter with a daughter of a German engineer who’d worked on a top-secret military project during WWI. She arrived in Montreal to give Gerald an old blueprint of an enormous howitzer her father had worked on. The supergun could shoot 120 kilometres — twice the range of any other weapon at the time.

German Roots and the Paris Gun

Back in 1918, Germans used the howitzer to terrorise Paris. Despite being located more than a hundred kilometres away from their target, the gun successfully shelled the city’s centre. The first shot hit the Place de la Republique. The following blast was a direct hit on the Church of St. Gervais in central Paris, killing 91 and injuring 100.
The weapon, named the Paris Gun, was invented by Fritz Rausenberger, the head of artillery development at Germany’s largest armaments company, Krupp. Despite primitive technology, the projectiles reached a height of almost 42 kilometres. 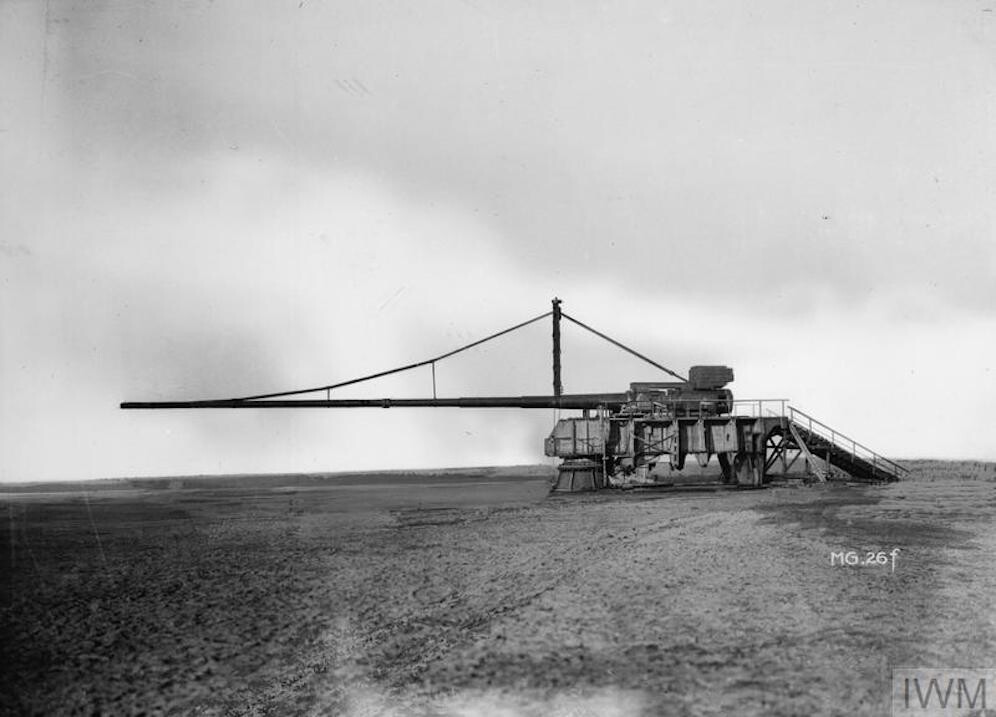 A crew of 80 sailors operated the Paris Gun. Standard artillery batteries surrounded it to create a noise screen hiding it from British and French spotters / Photo from the collections of the Imperial War Museums

However, with limited success, this “wonder cannon” was powerless to tip the scale of the war in the Germans’ favour. In 1918 the Germans hid the Paris Gun from the Allied forces, and according to several sources, eventually destroyed the howitzer.

Inspired by the Paris Gun blueprint, Bull decided to replicate the legendary supergun for civilian purposes. The new and enhanced version of the Paris Gun was supposed to launch guided objects at extreme height.

Gerald moved to McGill University from CARDE. With the United States Army and Canadian Department of Defense Production backing, he started working on a new project, called the High Altitude Research Project (HARP), with a test site on the island of Barbados. To make a supergun capable of launching objects to orbit, the scientist welded together two ex-Navy 16-inch cannons and made a huge 36-metre-long gun with a 424mm diameter. 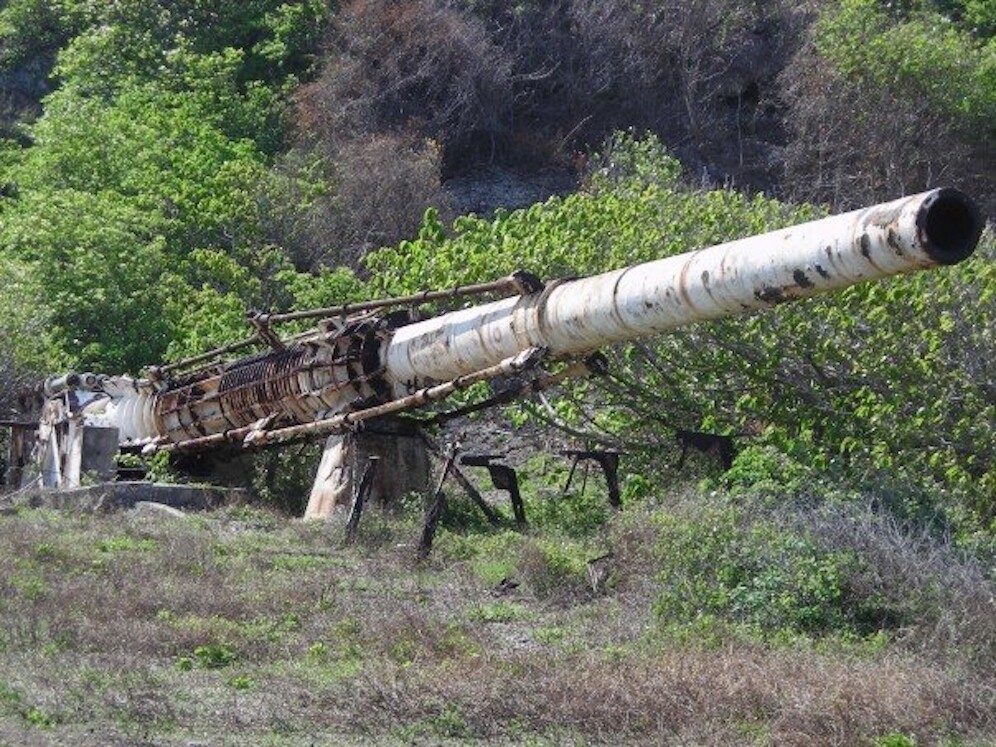 Throughout the 1950s, countries fiercely competed for space domination, while scientists clashed over the best launching device. Today rocket launch failures are less common, but in the 1950s, less than half of the launches succeeded. The initial stages of launching a conventional rocket require a massive amount of energy to start moving. Moreover, rocket motors were very expensive and not reusable.

“He thought HARP would be a big advancement for Canada in aeronautical engineering,” Gerald Bull’s son Philippe said.

"They were already putting small probes into space. It was the drive of his life to be working on that project"

Bull and his colleagues loaded the space gun to shoot high altitude projectiles into sub-orbit to collect weather probes. The object was to observe and study what happened in the atmosphere from sunset to sunrise. This tropical atmospheric and meteorological data was intended for the army. Gerald Bull insisted his method was more straightforward as it eliminated the need for multiple rocket stages.

“Low cost was the concept, at least,” explains Andrew Higgins, a professor at the Department of Mechanical Engineering at McGill University, Canada. “Rather than throwing away the first stage of a rocket, using a large gun for the first stage would enable this hardware to be reused and easily serviced.” 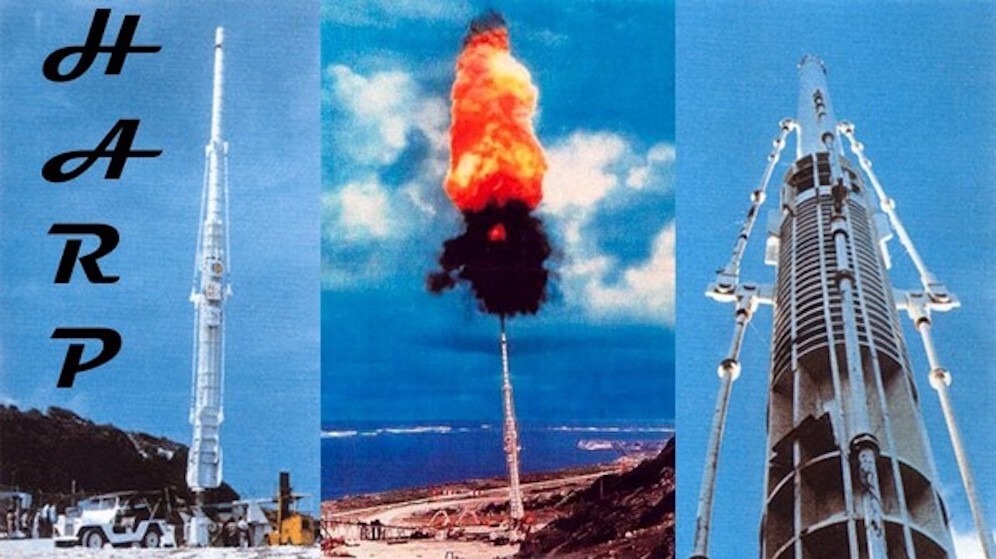 However, the project kept going over budget, while the promises remained unfulfilled. On top of that, the public attitude was changing towards military affairs and guns.
The HARP system seemed outdated when compared with mobile missiles. Press and other researchers criticising Bull’s project also prompted Canada to cut financial aid. Funding from the US stopped as well.

To continue his study, Bull needed money. He even created his own company — the Space Research Corporation of Quebec — and started selling ammunition to South Africa. In 1976 he was arrested and served six months in a US prison for violating the United Nations arms embargo. But it did not stop him, and after the release, he continued trading arms with South Africa and was fined $55,000 for breaching the international code. Fed up with constant troubles, Gerald decided to stop doing business both with Canada and the United States and moved to Brussels, where he continued to operate as a private European company.

In 1981, the Iraqi government sought out Gerald Bull to design artillery for the Iraq-Iran war. Saddam Hussein, who was the Iraqi defence secretary at the time, liked Bull and his designs. Shortly after the Iran-Iraq war began, the Iraqi government dispatched a private aircraft to Geneva to fly Bull to Baghdad. 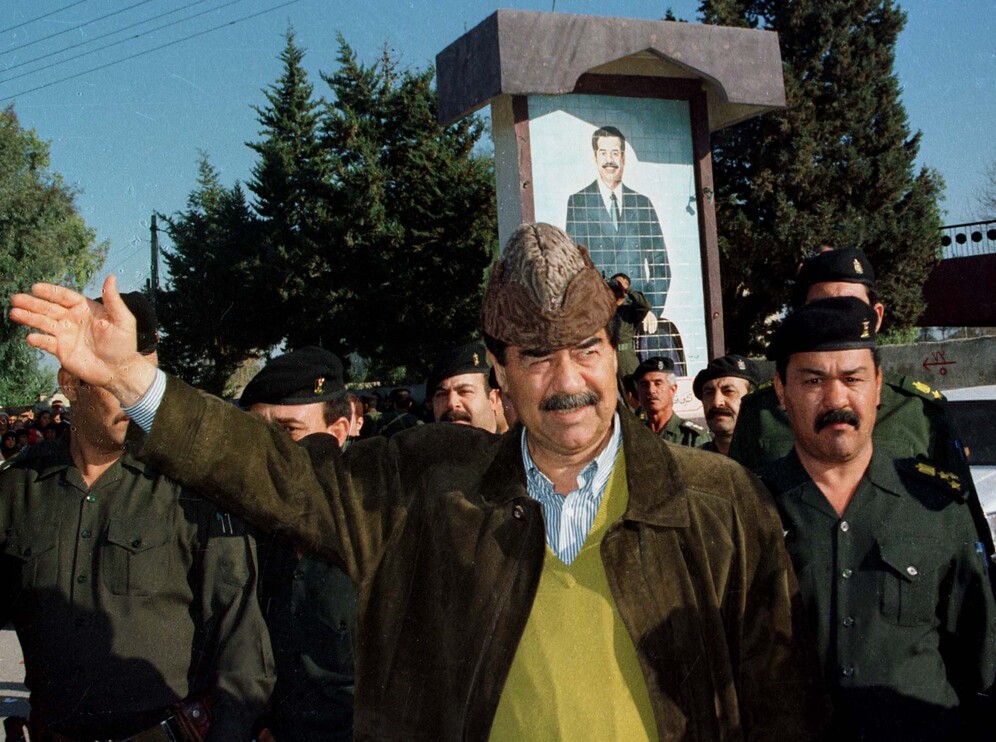 Bull still hoped to build a supergun capable of shooting projectiles to the orbit. Enjoying the support of the Iraqi government, he started Project Babylon. He created a prototype called Baby Babylon. It was a horizontally mounted 350mm barrel, 46 metres in length, weighing 102 tonnes. It was set on a hillside at a 45-degree angle. Several tests with lead projectiles showed positive results. 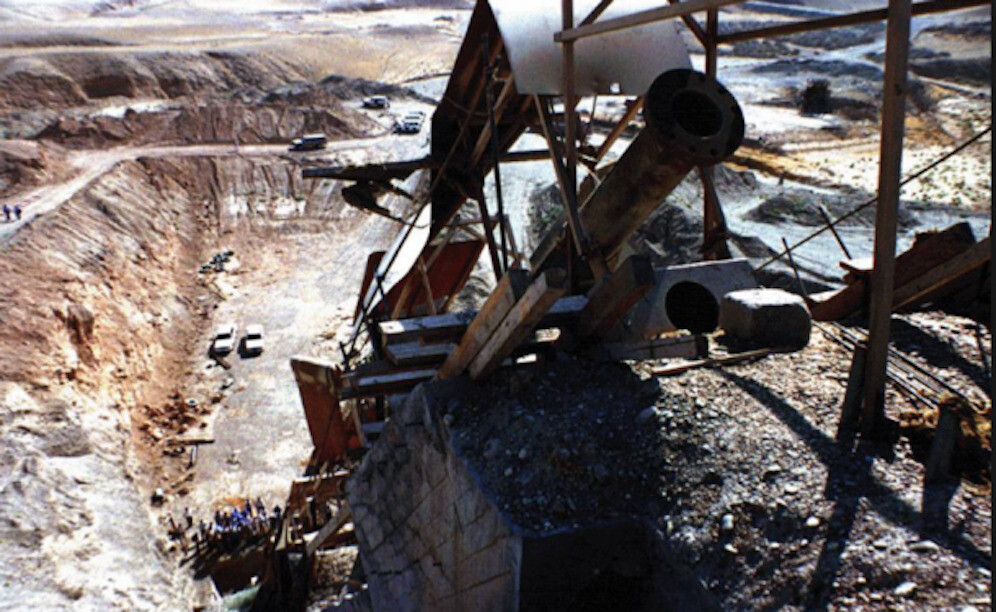 The second supergun, Big Babylon, was never built. It was expected to be a 1000mm gun with a 156 metres barrel. The complete device would have weighed about 2,100 tonnes. However, it is unclear whether both of these devices could be effectively used in combat. Even if loaded with conventional missiles, the superguns cannot be aimed and are vulnerable to air attacks due to their immobility. The guns would also produce a ’signature sound’ which could be easily detected.

Besides working on the project, Bull modified missile warheads, which increased the range of Iraq’s Scud missiles and created Iraq’s most fearsome ballistic weapons. He developed as much as three hundred 155mm howitzers, with two hundred of them manufactured in Austria and shipped to Iraq via Jordan in 1985. The remaining hundred were manufactured in South Africa, where they were marketed under the name G-5.

The defector, Iraqi General Hussein Kamel al-Majeed, who oversaw Iraq’s weapons development programme, said: “it was meant for long-range attack and also to blind spy satellites”. “Our scientists were seriously working on that. It was designed to explode a shell in space that would spray a sticky substance on the satellite and blind it”, he said.

Death of the Idea

On March 22, 1990, as Gerald Bull entered his apartment in Brussels, he was shot three times in the back and two in the head. There were no witnesses to the murder. The assassin used a pistol with a silencer. In the months preceding his death, Bull said his apartment had been ransacked several times.

As The New York Times reported, when the police arrived on the scene, the key was still sticking out of the door lock, and Bull’s locked briefcase contained $20,000 in cash. Who killed the Canadian is a mystery. According to one theory, it could have been the Israeli intelligence service Mossad. The murder was associated not so much with the supergun project but with Bull’s activities related to the Iraqi ballistic missile programme.