76 metres under the ice: Setting a new world freediving record

“Why would I need that?” said professional freediver, Andrey Matveenko, when his training partner suggested that he dive in a frozen sea. He had already reached extraordinary depths in open, warm seas, with World Freediving Championship medals in his pocket and a personal record of 108 metres.

In 2014, Andrey left his job as an economist to become a freediving instructor, turning his passion for freediving into a full-time profession.

Andrey kept brushing the idea aside until finally succumbing to the challenge to attempt the deepest ever free dive under ice. Despite having no ice freediving experience and the fact that he hates the cold, Andrey finally resolved to give it a try in the White Sea.

“The hardest thing about ice diving is getting dressed,” Andrey says. With minus ten degrees Celcius outside and minus two in the water, it takes quite some time to get ready for the plunge.

The record under-ice free-dive currently stands at 75 metres, set by New Zealander, Ant Williams. Andrey’s goal is to plunge just one metre deeper. That might seem easy for someone like Andrey, who's dived deeper than 100 metres but there's a big difference between diving in warm and freezing waters. 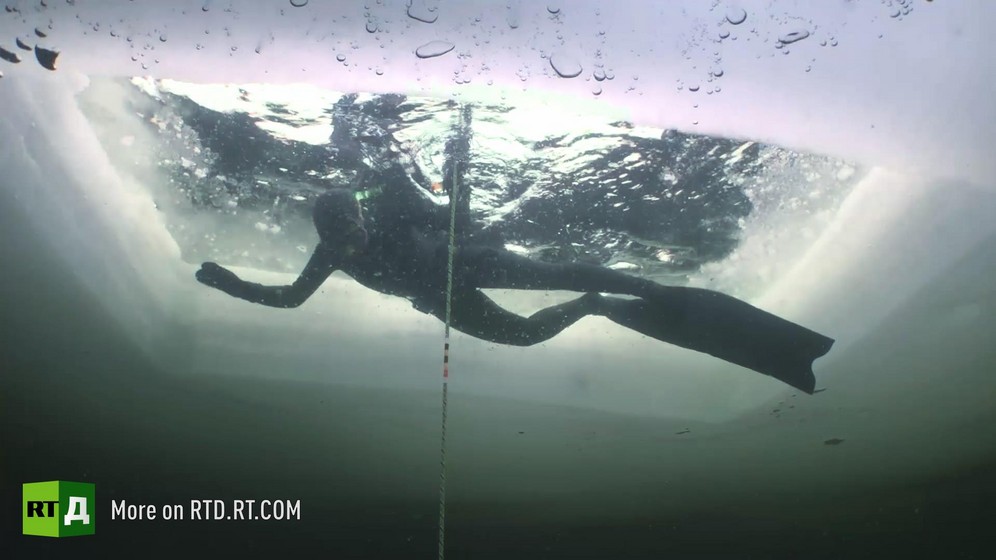 There are different freediving disciplines. Andrey is preparing for what's known as Constant Weight (CWT) when the diver descends along a dive-rope without touching it, usually using a monofin. They can touch the rope only when they reach the bottom to signal their return.

“When we dive deep, the air that we have inside starts to get squeezed under pressure, and it's believed that at a depth of 80 metres or more, our lungs become the size of an orange”, Andrey explains. To keep control of the body's responses while diving on one breath, divers have to stay calm, which is even more difficult in subzero temperatures and pitch-black darkness.

“Unusually low light. Below 20 metres you can’t see the dive-line that's ten centimetres in front of you,” Andrey describes his first ice dive to 40 metres in a Facebook post. “Surprisingly, it wasn’t as bad as it seemed.”

With only five days on his hands at the ‘Arctic Circle’ diving centre in the White Sea, Andrey has to adapt to the unfamiliar conditions and a type of new stress caused by the cold. The freediver is set to go deeper with every plunge under the watchful eyes of, diving buddy, Tatyana Zemskikh, and ice diver, Konstantin Novikov.

“To make an under ice dive possible, a lot of people need to work together; basically, they help you in doing this. You’re not going to pull it off on your own. If there’s no ice hole, no warm place, no support, no belay, you’re not going to do anything. Well, you can drown. That you can do,” quips Konstantin Novikov, who set the 2015 world under ice freediving record at the northernmost point on the planet.

When it comes to diving to extreme depths, Andrey trusts Tatyana “one hundred per cent.”

Minutes before the deepest dive under ice on a single breath, Andrey concentrates on what he feels to stop a train of thought. Watch Andrey’s epic journey into the White Sea depths in our new release, Freeze Divers.