Reality tunnel: How social media controls our lives and forces us further apart
Could the mosquitoes start another deadly outbreak in the US?

US wildfires: The burning issue

Wildfires in the US have been a regular occurrence for years bringing devastation and death to the Pacific coast and further inland. This year's fires are by far some of the most powerful. RTD answers the burning questions about surviving the disaster. 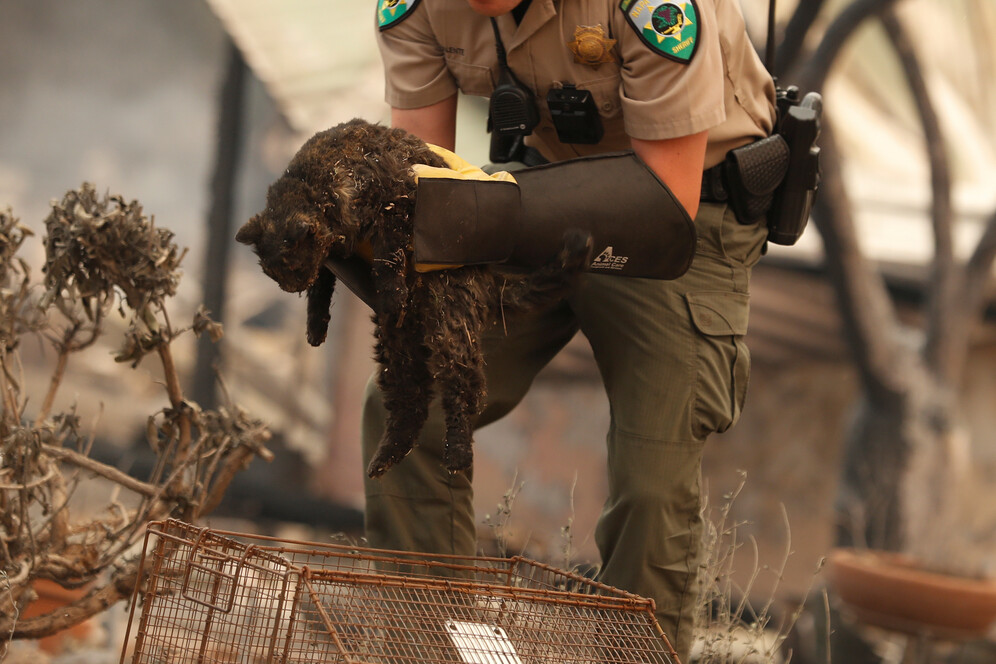 Wildfires on the US West Coast have reached unprecedented levels. Vast areas of California, Oregon, Montana, Idaho and Washington State are ablaze. Hundreds of thousands of people have been displaced, and at least 35 killed. Social media is filled with images of orange skies and vast expanses blanketed with hazardous smoke. According to the National Interagency Fire Center “Wildland fire activity continues in 10 western states where 69 large fires have burned 3.7 million acres. Evacuation orders are still in effect for 17 large fires in the West”. With 3.6 million acres burned in California alone, many are asking why this particular fire season has turned out to be so devastating.

What started the fires?

Most of the fires, Californian ones, in particular, were started by humans. The El Dorado fire in Southern California was started on September 5 by a pyrotechnic device at the El Dorado Ranch Park 80 miles outside of Los Angeles. There’s an arson investigation into the Alameda fire that killed several people and destroyed hundreds of homes in Oregon. Several fires in Oregon were caused by downed power lines and spread fast due to unusually strong winds. 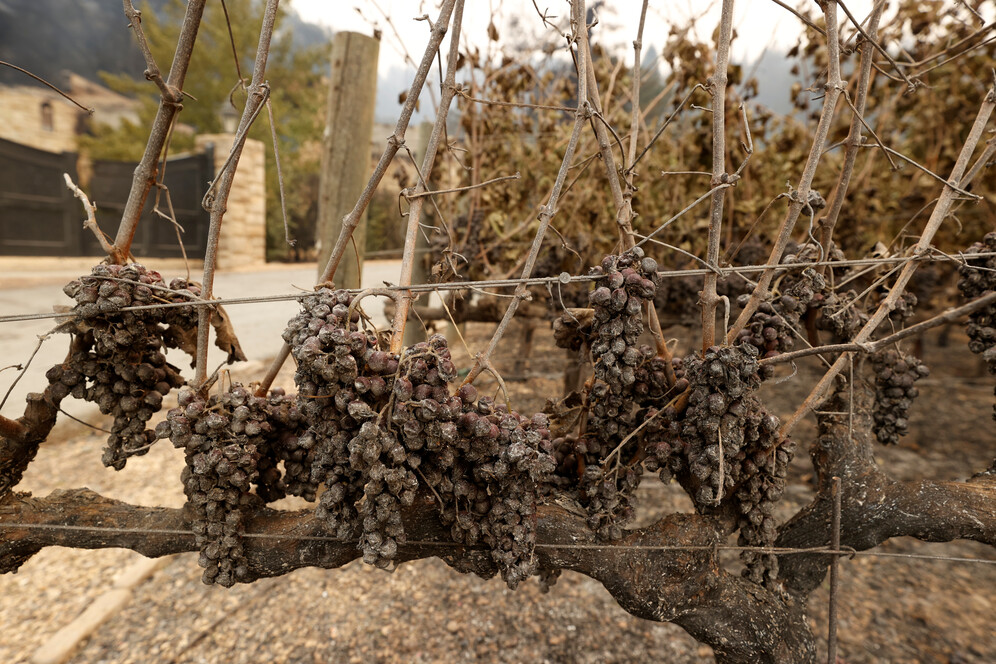 Burned grapes and vines are seen at the Chateau Boswell Winery after the Glass Fire came through, in Saint Helena, California, U.S., September 28, 2020. REUTERS/Fred Greaves

But sometimes natural phenomena are to blame: this past August was the hottest in the history of California, seeing at least 14,000 dry lightning strikes in three days, as reported by California Governor Gavin Newsom. Experts say climate change causing global warming and air pollution is playing a great part in the current crisis. Donald Trump, who visited California two weeks ago rejected climate change science, saying forest management was to blame for the blazes instead, and that he doesn’t “think science knows what is actually happening.”

The far-right and conspiracy theorists have been spreading misinformation about the origins of the fires, claiming they were set by members of Black Lives Matter and the militant Antifa movement; however these claims remain entirely unsubstantiated.

Is it worse than ever? 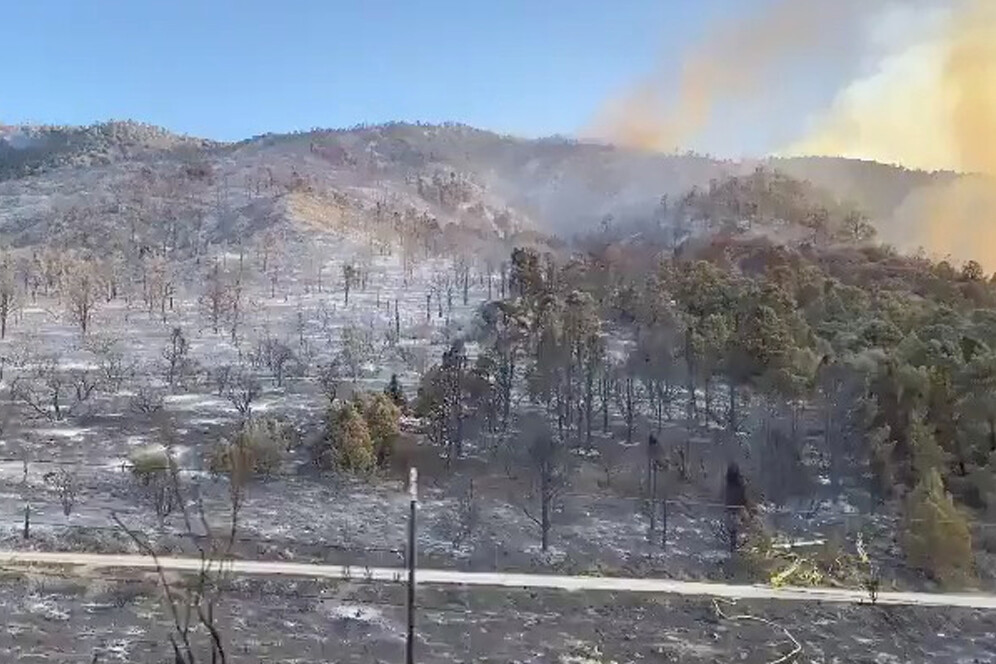 Smoke is seen as the Bobcat Fire burns in fields in Valyermo, California, U.S/Courtesy Angeles Crest Creamery, via REUTERS

This year is indeed one of the worst. Dar Mims, a meteorologist with the California Air Resources Board, said: “What I’ve been watching is the worst fire season in the history of California.” Fires are spreading across the West Coast at a staggering rate. In Oregon, 500,000 people have been displaced as of September 10, which amounts to 10% of the state’s population. At least 20,000 people are under evacuation orders in Northern California. Evacuations have begun in Idaho, where a sizable 27,000-acre fire is burning. Hundreds of buildings and private homes have been lost, including almost the entire town of Malden, Washington. In California, 28 significant wildfires burned over 3.3 million acres - an area larger than the state of Connecticut.

The air quality on the West Coast has remained a big concern. Because of all the smoke generated by the blazes, four of its cities, Los Angeles, San Francisco, Seattle and Portland, Oregon, are now among the ten most polluted places in the world. Meteorologists suggest air quality may not improve until October.

How long are they expected to continue?

It is still early in the wildfire season, so fires are expected to continue. While the situation in Oregon is improving, Northeastern California is in danger of having new fires as extremely gusty winds, and low humidity is predicted. Daniel Swain, a climate scientist at the Institute of the Environment and Sustainability at UCLA, tweeted “Predicted critical fire weather conditions have come to fruition”, causing new fires and aggravating the existing ones once again.

Did COVID-19 add to the gravity of the situation?

This year the wildfire season is layered atop the continuing coronavirus crisis. For millions of Californians, the outdoors have been a refuge in the pandemic, which may have resulted in more instances when human negligence caused fires. On the other hand, in California, wildfires have been historically fought by inmates from the state penitentiary system. This year the effort was undermined, as some prisoners who’d participated in the firefighter programme got an early release to protect them from the virus. Only 1,306 inmates are currently deployed on the lines of fire, which is less than half compared to last year.

What is to be done? 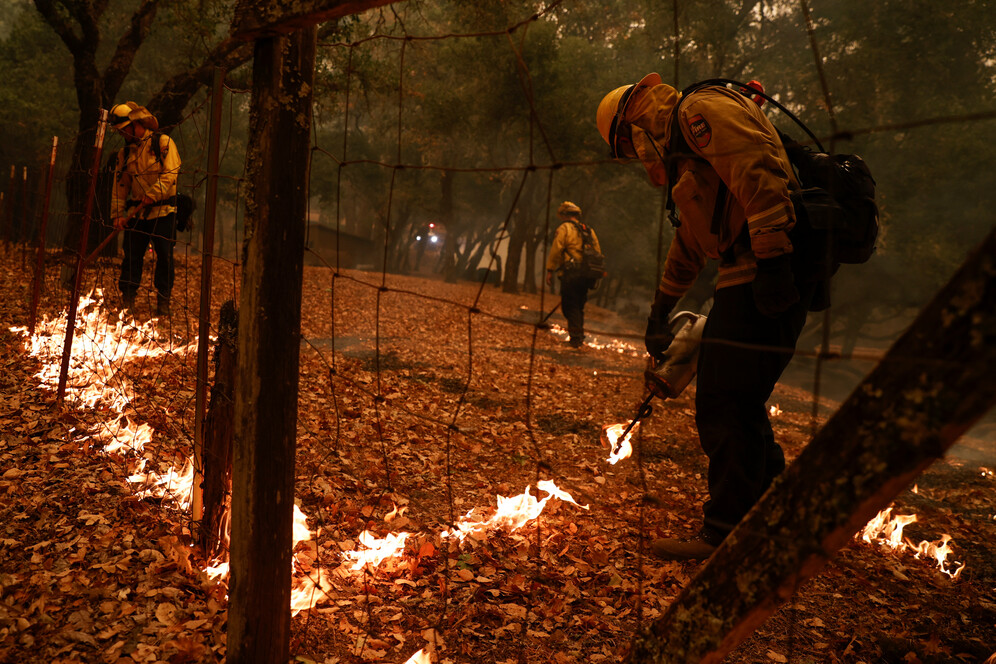 Firefighters with the Cal Fire Sonoma-Lake-Napa Unit (LNU) light a backfire to defend a property during the Glass Incident Fire in Santa Rosa, California/ REUTERS by Stephen Lam

Jennifer Balch, director of Earth Lab at the University of Colorado Boulder, says the wildfires are causing more damage not just because more homes are being built in the line of fire, but due to climate change, that’s creating warmer, drier conditions that make communities more vulnerable to wildfires. So addressing climate change should be a priority in the long run.

In the meantime, policymakers must recognise that wildfires happen and discourage development in fire-prone areas. Forestry and fire management experts are saying, paradoxically, prescribed burns could become a big part of the strategy of wildfire prevention. Controlled burns were practised by Native American tribes to clear out underbrush encouraging new plant growth. These days firefighters intentionally light fires in areas to clear excess vegetation when it’s easy to control the flames, thus preventing spontaneous wildfires during droughts and heatwaves.