PESTICIDE US: The story of one controversial chemical

Pioneered as an insecticide during WWII, the substance called DDT was successfully used against insects transmitting typhus and malaria. For years the substance, later considered by the CDC as a possible carcinogen, was sprayed over whole neighbourhoods in the US despite an outcry from environmentalists and fears it was putting some species on the brink of extinction. Adults and children were exposed to large amounts of the substance they thought was safe. It was safe in small quantities, but once it showed its effectiveness, people went overboard using it.

DDT (dichlorodiphenyltrichloroethane) was linked to cancer and infertility even though it was approved for home and agricultural use through until the 1970s. It took more than a decade for environmentalists to achieve a blanket ban on the poison. However, fifty years later, the chemical, though still banned in the US, was rehabilitated and reinstated as the most effective malaria treatment in several countries.

World War II was probably the first US war when illnesses took fewer lives than bullets or bombs. It’s estimated that for every three soldiers fighting in the Civil War, five died from diseases like malaria and typhus. The tide changed in the 1940s when Americans armed themselves with DDT, the newly introduced insect killer. Starting from 1943 the powder was dusted from the air and sprayed directly on soldiers and refugees. First synthesised in 1870, the DDT didn’t have any practical use until in1939 a Swiss scientist, Paul Mueller found it potent against moths and other insects.

Before then, insecticides were either ineffective and expensive, or too poisonous, like arsenic.

Effective and cheap DDT was considered harmless to humans. The new formula was embraced by the US and other governments who sought to put pest-borne infections under control. Millions of people in Italy, North Africa, and the Pacific, had come in direct contact with the ‘louse killing’ powder during the war. 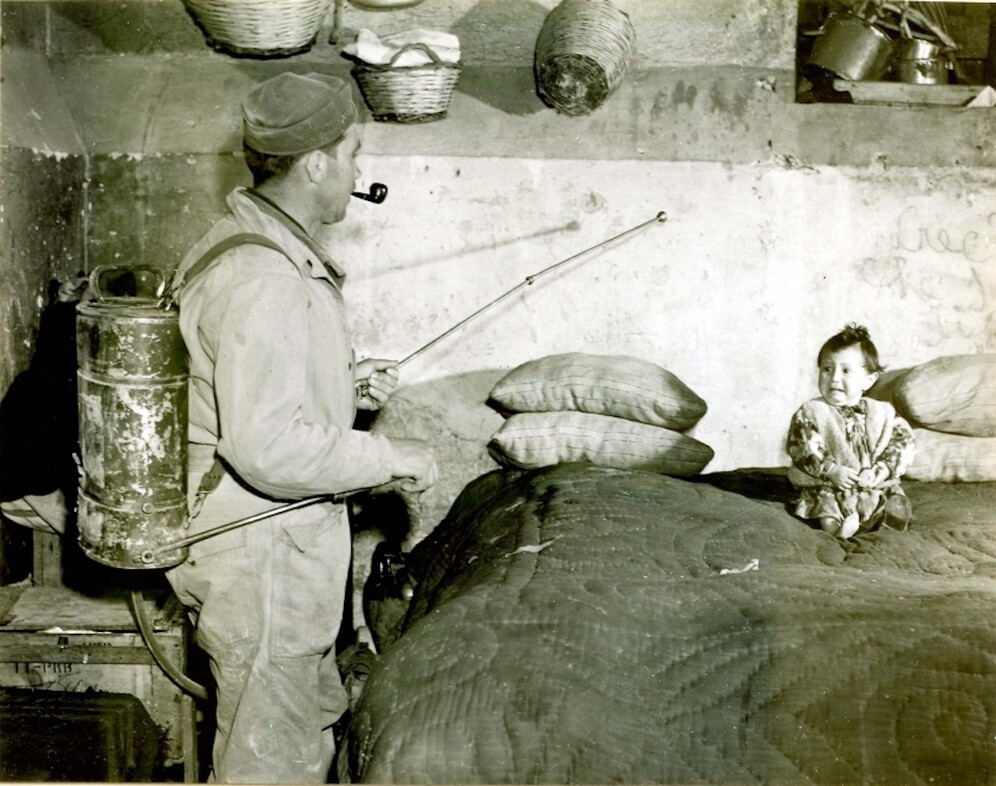 In Naples, more than a million Italians were dusted with DDT. Scores of people were dying from typhus in Naples, where new cases were approaching 60 a day. Within a month of systematic spraying of DDT, the number of new cases had dramatically dropped. By the end of the month, no new cases had been reported. The same picture could be seen everywhere DDT was applied, drawing newspapers to call the pesticide a ‘miracle’ which saved troops from “the dreaded plague that has followed in the wake of every great war in history”.

DDT was labelled as “one of the great scientific discoveries of WWII” by The Times magazine. The pesticide creator was awarded the Nobel Prize in 1948 “for his discovery of the high efficiency of DDT as a contact poison against several arthropods”.

Today DDT is no longer permitted in the US like almost everywhere where it’s been used and produced. It has earned notoriety for an allegedly damaging the US environment in peacetime. For around 30 years, DDT was extensively used for eliminating pests. About 600,000 tonnes of the pesticide was sprayed across America until the 1970s when DDT was banned.

Concerns over dangers of DDT rose during the 1960s echoing the environmentalists of the post-WWII era.

But what had changed the public mind so dramatically? In the 1940s the fame which DDT had gained on the frontline, assured Americans of its safety. By the end of WWII, the US began to produce DDT, with some of the chemical being exported. After learning about DDT’s success in defeating malaria abroad, America eagerly used the experience to target malaria nationwide. More than 4,650,000 house spray applications and numerous air dusting flights were authorised as part of the National Malaria Eradication Programme. In just two years, the country was declared free of disease. 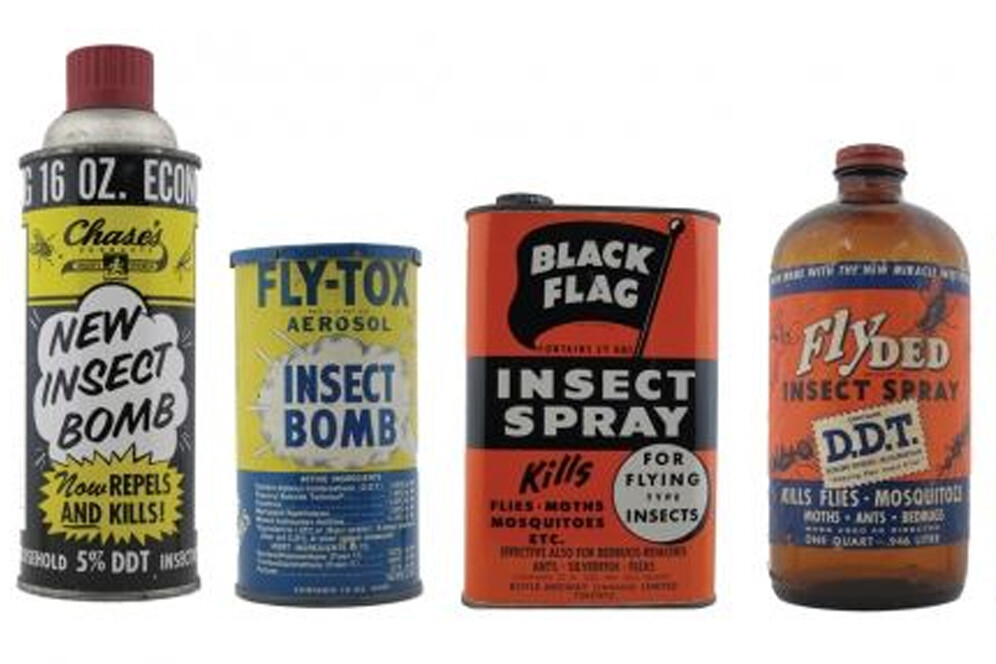 But in the desire to fight malaria, the use of the chemical in America went far beyond the initial purpose and precipitated into a full-scale war on pests. Mixed with diesel fuel, DDT was systematically airdropped on parks including Yellowstone National Park. In 1955, biologists from the National Park Service were eliminating moths, whose larvae were damaging trees. Later it was revealed only a quarter of the deadly mixture hit the ground, while most of it ended up in the Yellowstone River killing hundreds of fish. 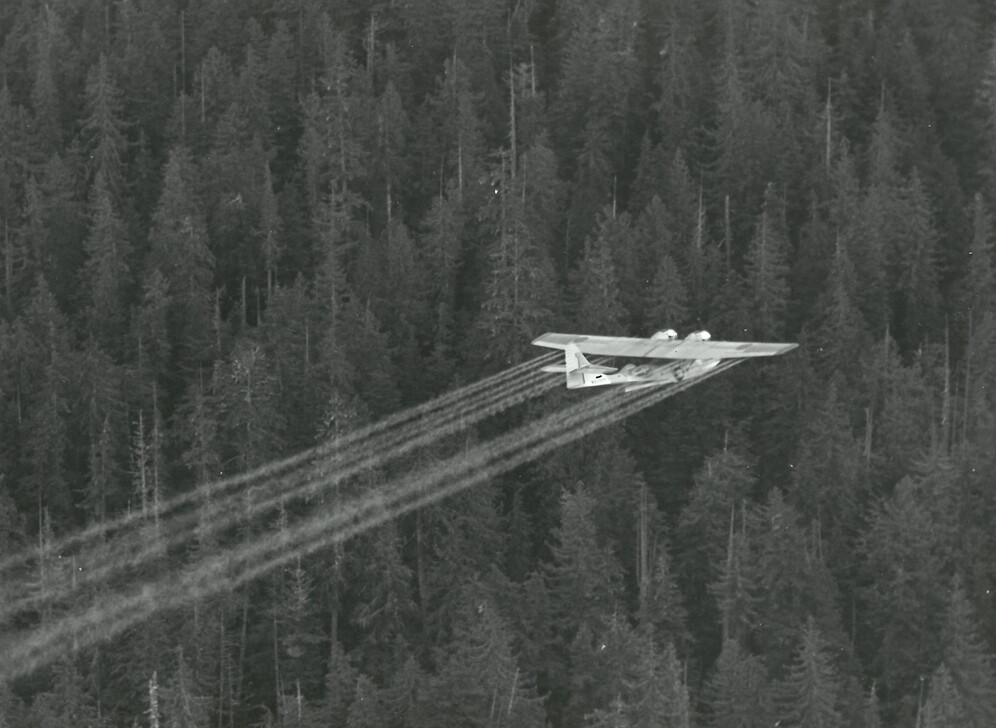 Over 3,500 kilos of pesticide were sent in Texas to wipe out mosquitoes which were mistakenly thought to carry polio. From North Texas to Galveston Bay aircraft sprayed DDT which was useless against the virus.

It wasn’t an issue up until 1949 when the first government study found DDT traces in the milk of cows exposed to the pesticide. As a result, farmers received a warning not to use the pesticide on dairy cattle; however, banning pesticide wasn’t suggested.

The first person to officially claim DDT damaged humans and nature was Rachel Carson, a marine zoologist and renowned author. In her book, “Silent Spring” she pointed out that “Once it [DDT] has entered the body it is stored largely in organs rich in fatty substances (because DDT itself is fat-soluble) such as the adrenals, testes, or thyroid.”

Carson stood for a blanket ban of the pesticide for three reasons: DDT’s harmful impact on the food chain was outlined as the main reason why several birds, including bald eagles, were on the brink of extinction. Secondly, DDT’s horrible impact on human health by causing cancer, brain damage, and even death. And third is the risk malaria mosquitoes develop resistance due to the overuse of DDT in agriculture.

The ‘Silent Spring’ was ostracised by the critics, as many of Carson’s claims were unsubstantiated, and the health risks lacked sufficient scientific proof.

However, public concerns inspired the environmental movement. Responding to these concerns, President John F Kennedy recommended an overview of pesticide policy. In 1972 DDT was finally banned by the Environmental Protection Agency based on the harmful environmental effects and potential human health risks. 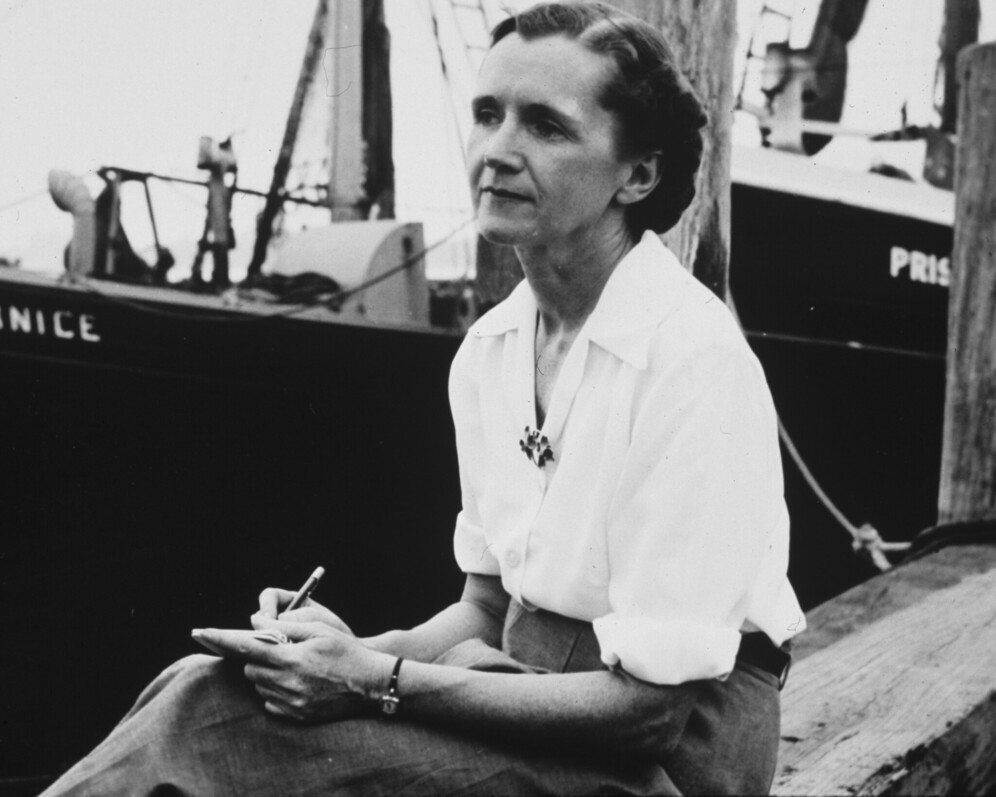 By the time Rachel Carson published her book, the use of DDT had already reduced the number of malaria cases to almost zero in South Africa and India / Courtesy USDA

That move has prompted a chain reaction that forced other countries eventually to stop using the substance. A range of later studies in Europe and the US found little or no evidence of DDT damaging human health the way Carson described it. However, an official statement by the CDC claims “Human health effects from DDT at low environmental doses are unknown. Following exposure to high doses, human symptoms can include vomiting, tremors or shakiness, and seizures. Laboratory animal studies showed effects on the liver and reproduction. DDT is considered a possible human carcinogen.”

By the time Rachel Carson published her book, the use of DDT had already reduced the number of malaria cases to almost zero in South Africa and India.

Almost fifty years since Carson initiated the DDT ban, the number of malaria cases soared again in the countries where the disease was thought to have been eradicated — India, Sri Lanka, and South Africa.

For that, Carson was severely criticised by her opponents. Only in 2006, the World Health Organisation announced it was backing DDT as a part of its effort to eradicate malaria. However, it is still officially prohibited in the US and several other countries as a potent pesticide.