Hot December on RTD: Hong Kong cage dwellers, Congo youth gangs & more!
‘I never thought I’d be so happy about being deported’: An RTD crew finally back after a 2 week bureaucratic ordeal in Nigeria

Are China and the USA headed for war? 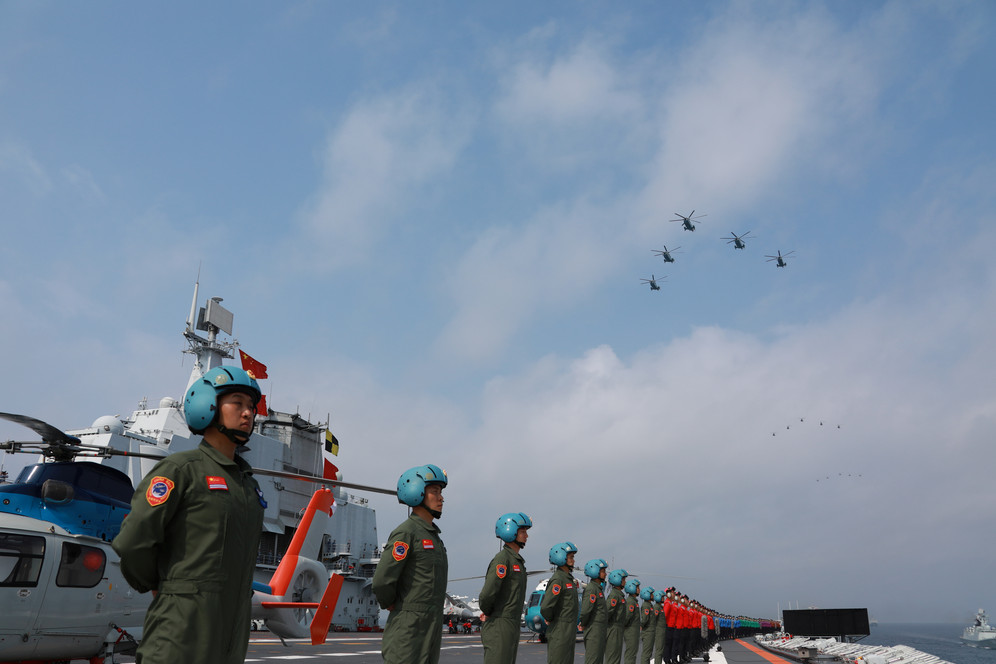 Are China and the United States heading into a Cold War? Or even a real one! Vice-president Pence’ declarations to journalist Josh Rogin as they flew in Air Force Two over the South China Sea certainly point in that direction. According to Mike Pence, when President Trump meets Chinese President Xi at the G20 summit in Argentina on 30 November, he will demand ‘“massive changes to Beijing’s economic, military and political activities’”, or else “face a new Cold War”.

This comes after Donald Trump announced on 20 October that America was pulling out of the Intermediate range Nuclear Forces (INF) Treaty with Russia because…it didn’t cover China. A few days later, Xi Jinping told his military to “concentrate on preparations for fighting a war”. Then, during the Asia Pacific Economic Cooperation meeting held in Papua New Guinea mid-November, Mike Pence announced that the US would team up with Australia to help Papua New Guinea redevelop Lombrum Naval Base on Manus Island. The Vice-President said the move was linked to freedom of navigation in the South China Sea. Strangely, that’s a thousand miles away. 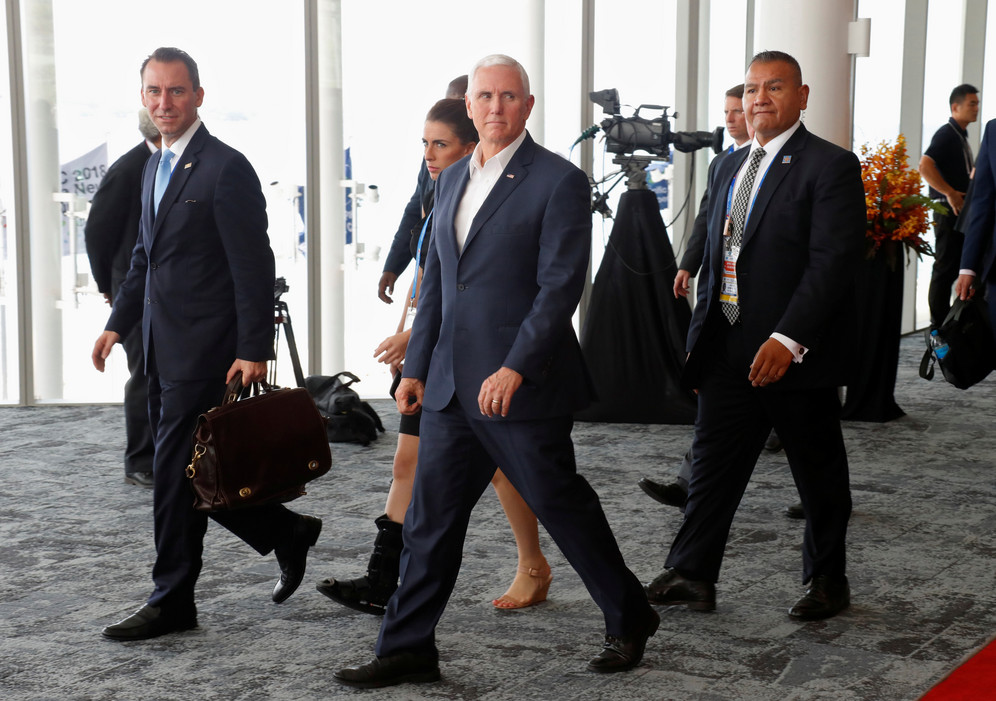 What's going on in the South China Sea?

In recent years, tensions between the two powers have been heating up over the South China Sea. Chinese rhetoric has claimed as its own the Nine Dash Line , taken from a 1947 map, which encompasses most of the maritime area south of the Chinese coast, on the basis that Chinese fishermen have been active there for centuries. Since 2014, the Chinese military has moved onto the Spratly islands, an uninhabitable archipelago close to Malaysia and the Philippines, even building a 3 km airstrip on the coral reefs.

This move bolsters China’s claim to territorial waters 12 nautical miles from land, and 200 miles as its exclusive economic zone. If China got what it wanted, the South China Sea would essentially be privatised, giving it a monopoly on all fishing and oil rights in the resource-rich waters not to mention control of one of the world’s busiest shipping lanes. However, the Permanent Court of Arbitration ruled against China in 2016, upholding the Philippines’ complaint about Chinese annexation, a ruling that China rejected. 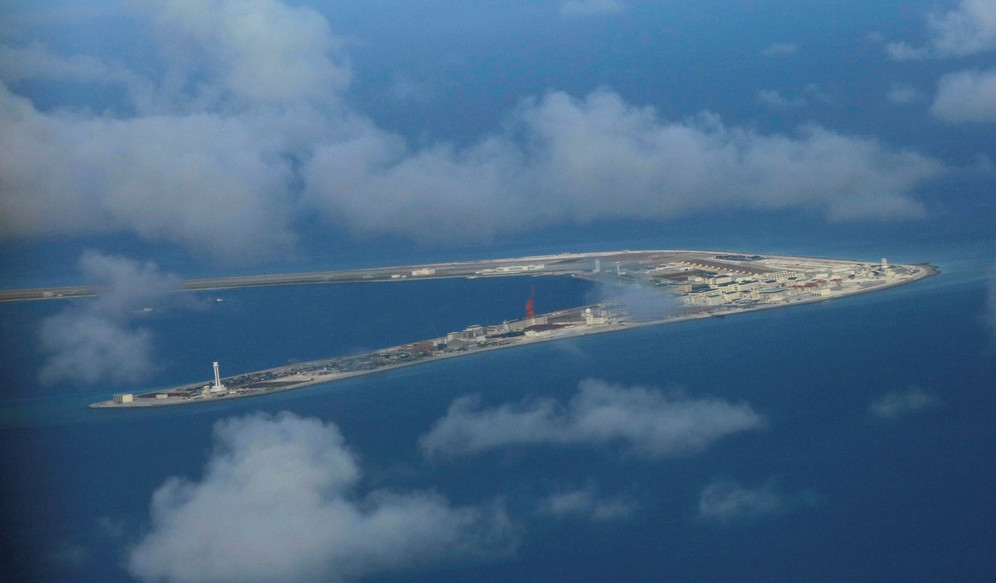 Is the US helping?

To defend the Sea’s status as international waters, U.S. warships have conducted “freedom of navigation” operations, sailing alarmingly close to Chinese installations and vessels. From the United States’ point of view, it is standing up for international maritime law and the many small nations that could not hope to prevail against the regional giant. 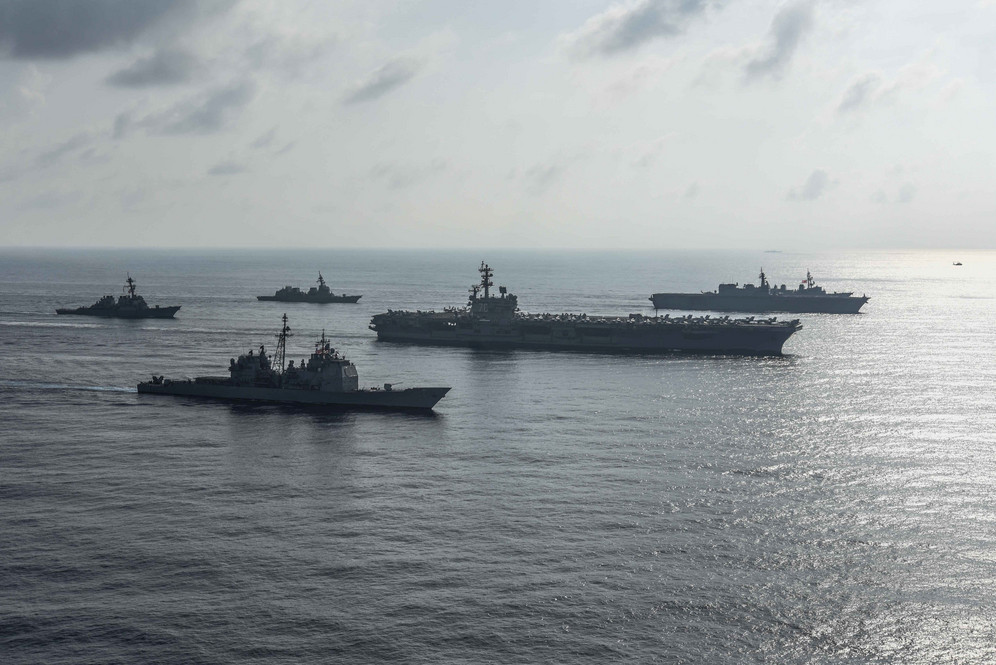 China’s neighbours are not as happy about the protection as one might expect. For a start, the Philippines, Thailand, Vietnam, Brunei and Malaysia would all like to have their own, more modest, territorial waters. The idea of carving the wealth in the Sea up between themselves is enticing. Taiwan even agrees with China on the Nine Dash Line, even though it claims the area for itself as the true government of China.

Moreover, the idea of a stand-off between China and the US is a concern for anyone who would be caught in the middle. Filipino Ambassador to Beijing, Chito Sta. Romana, compares it to a fight between elephants on the plains: “What we don’t want is for us to be the grass”. South Korea has therefore avoided joining the US-Japanese policy of a “free and open Indo-Pacific”, even though Seoul had agreed to host the US Terminal High Altitude Area Defense (THAAD) system, an anti-missile shield, set up with China in mind, on its soil. 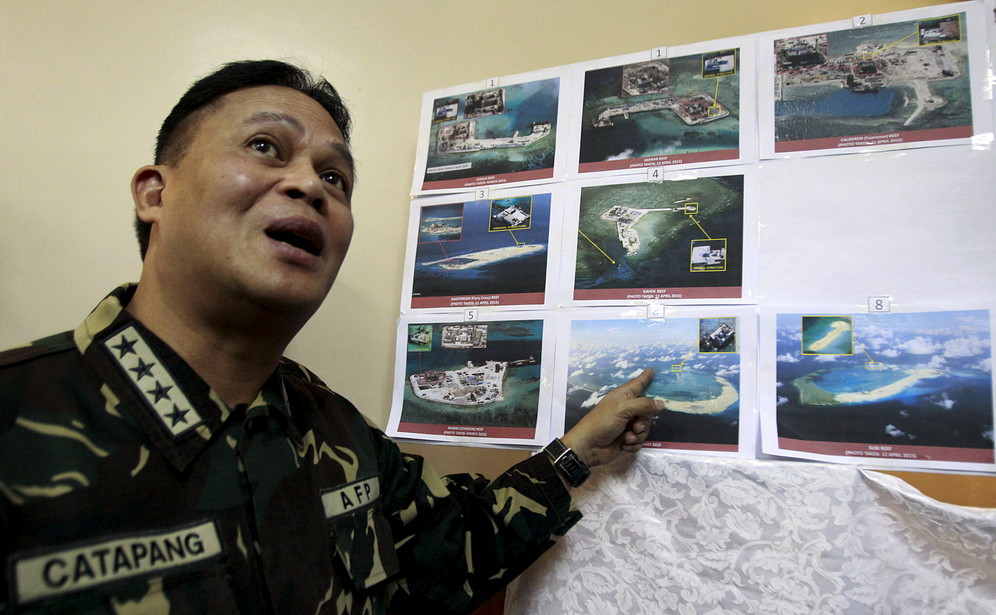 Chief of Staff of the Philippines Armed Forces (AFP), Gregorio Pio Catapang shows images of structures being built by China on the disputed islands during a news conference at the AFP headquarters in Manila. April 20, 2015.© REUTERS

ASEAN countries even held a joint maritime exercise with China at the end of October, while the two superpowers were trading threats. As the Philippines’ Foreign Secretary, Cayetano explained to RT when he visited Moscow in May 2018, “The Americans are parents, but we say: ‘We are off to college. Allow us to pick our own friends. The Chinese are our roommates, our close neighbours.’” the Governor of Manus Island complained that he wasn't consulted about plans for the Lombrum Base, which he considers unnecessary. Overall, Asian countries feel able to conduct their own negotiations with China to improve their economies and avoid a potentially dangerous military escalation. 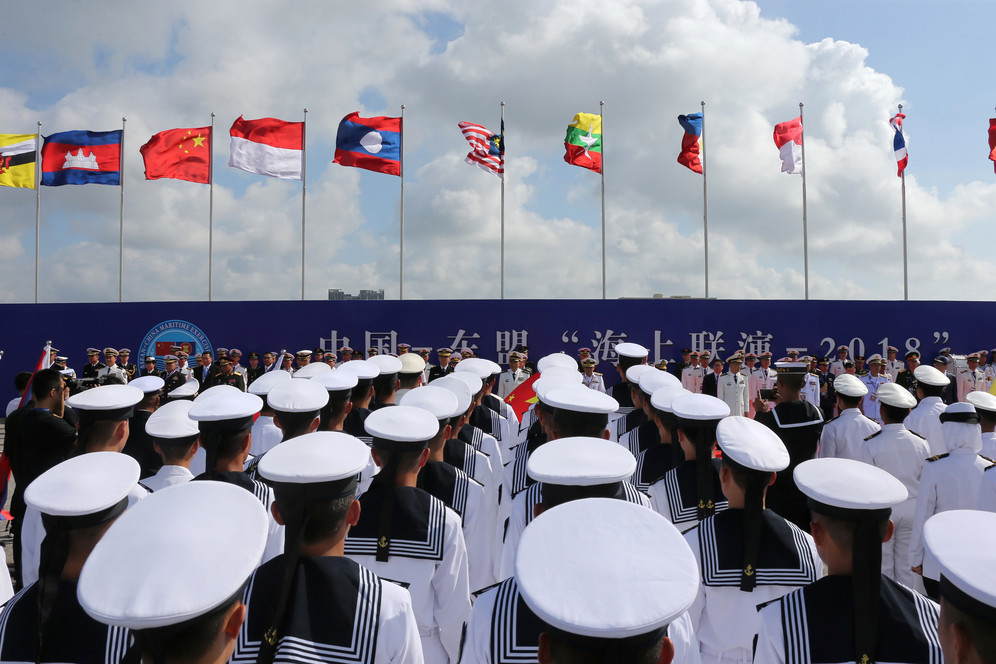 Why is the US military asserting itself in Asia?

Nevertheless, it may not prove particularly easy to shut America out of the region. The United States sees itself as a Pacific nation with a stake in Asia. Barack Obama initiated a “Pivot to Asia” policy to reaffirm US leadership in the region, which included sending in more US battleships. Fundamentally, its military has become accustomed to being untouchable. As the USA’s 2018 National Defense Strategy puts it: “For decades the United States has enjoyed uncontested or dominant superiority in every operating domain. We could generally deploy our forces when we wanted, assemble them where we wanted, and operate how we wanted.” 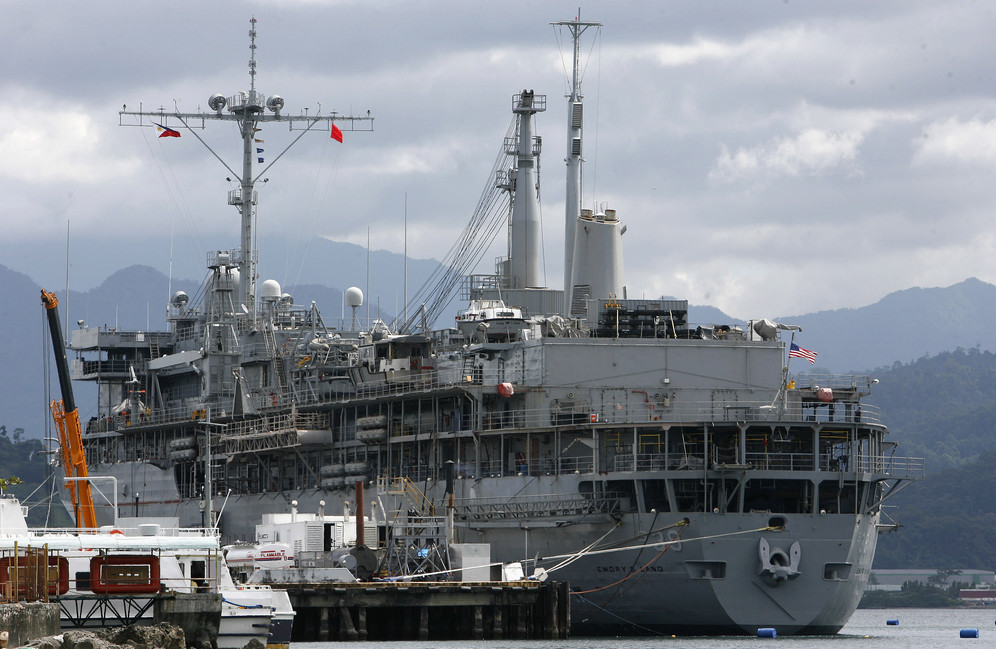 The USS Emory S. Land, a submarine support vessel that is part of a U.S. military buildup, is seen docked in Subic Bay north of Manila November 8, 2012. © Cheryl Ravelo / REUTERS

That included maintaining a huge strategic advantage over China, with 450 military bases dotted around Asia and the Pacific, some with nuclear missiles pointing at the People’s Republic. However, improvements in Chinese defence capability in the past ten years have slightly dented this pre-eminence. Its missiles could now reach US bases in Japan and Guam.

Does this reduced disparity really make China public enemy number one? According to the National Defense Strategy 2018, “the central challenge to U.S. prosperity and security is the re-emergence of long-term, strategic competition by what the National Security Strategy classifies as "revisionist powers”, namely China and Russia. Specifically, “as China continues its economic and military ascendance, asserting power through an all-of-nation long-term strategy, it will continue to pursue a military modernization program that seeks Indo-Pacific regional hegemony in the near-term and displacement of the United States to achieve global pre-eminence in the future.”

But does China want to be the new hegemon? “The Chinese are not that stupid” counters Shanghai-based investor and political scientist, Eric X. Li. Whereas Western Christians aim to convert others to their beliefs, the Chinese “built the Great Wall of China to keep the barbarians out”, he argues. Bad experiences of Western meddling, from the violent drug pushing of the 19th century Opium Wars to support for General Chiang Kai Chek against the Communists, explain their defensiveness. 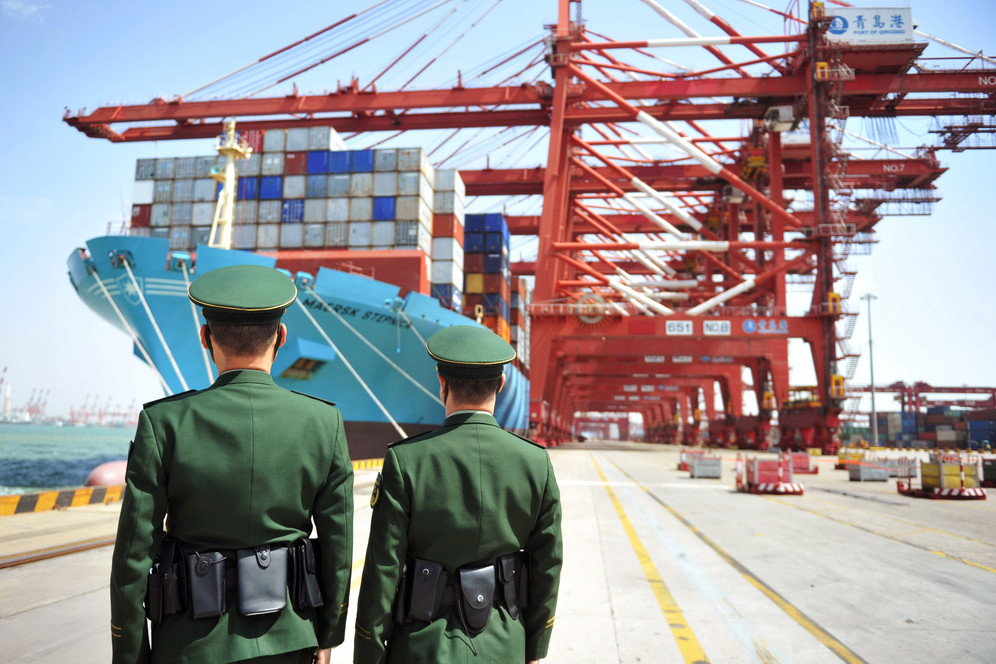 Police officers are seen in front of a cargo ship with containers at a port in Qingdao, Shandong province, China April 6, 2018. © REUTERS

China’s rise to global economic superpower status is undeniable; it currently boasts the world’s second largest GDP. It is expected to overtake the United States by 2030. China’s big idea is the Belt and Road Initiative to fund the infrastructure needed to reshape trade routes to its benefit. As China reaches an economic weight that matches its demographics, Africans and Europeans as well as Asians and Americans are looking for new ways to work with the Chinese.

China is targeting our farmers, who they know I love & respect, as a way of getting me to continue allowing them to take advantage of the U.S. They are being vicious in what will be their failed attempt. We were being nice - until now! China made $517 Billion on us last year.


The US military advocates negotiating “from a position of strength”. Donald Trump is applying his usual modus operandi of a salvo of tweets and tariffs before sitting down with his counterparts to hammer out a deal. Half of Chinese imports to the US now face extra duties. Military pressure may be one more tactic to intimidate an economic competitor. However, the Chinese and US economies are extremely interlinked. This, together with the risk of nuclear annihilation, would make war incredibly costly, in so many ways! 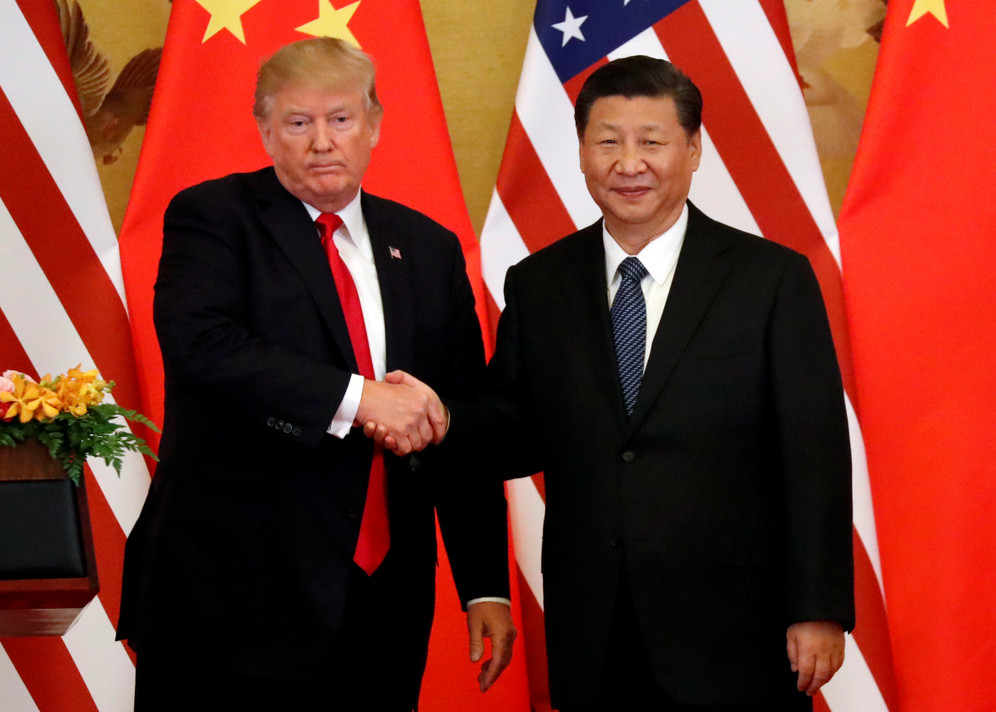