Genetically Modified Kids: Brilliant Innovation or Crime Against Nature
PESTICIDE US: The story of one controversial chemical

President Trump announced Amy Coney Barrett would be his Supreme Court nominee. Here’s what you need to know about her.

Just eight days after the death of Supreme Court Judge Ruth Baden Ginsburg, on September 26 President Donald J. Trump nominated Judge Amy Coney Barrett as his candidate for the vacancy. With only a few weeks to go before the November 3 election, Barrett’s confirmation process has political implications for this year’s presidential and congressional races.

U.S President Donald Trump arrives to hold an event to announce his nominee of U.S. Court of Appeals for the Seventh Circuit Judge Amy Coney Barrett to fill the Supreme Court seat./REUTERS by Carlos Barria

The Senate Judiciary Committee is to hold a confirmation hearing for Barrett the week of October 12. Republican senators and the president himself have said the Supreme Court needs to have all nine justices on the court by the time of the election, in case their verdict is required to decide the result. Hence, it looks like Barrett’s is going to be an extremely rushed confirmation process.

Over the past 244 years, no US Supreme Court justice has been confirmed so close to an election.

Although based on the recent polls, 57 percent of Americans would rather have a new judge selected by the winner of the presidential election and the Senate vote next year, but Republicans view the opportunity to strengthen the court’s conservative majority as too good to pass up. If the Republican-controlled Senate confirms Barret, it will have secured a 6 to 3 conservative majority on the Supreme Court.

Who is Amy Coney Barrett?

A few facts about the nominee: 48-year old resident of Chicago, Amy Barrett currently serves as a judge on the US Court of Appeals for the Seventh Circuit, which covers Illinois, Indiana, and Wisconsin. After having graduated Notre Dame Law School in 1997, she married Jesse Barrett, a former federal prosecutor who’s now in private practice. They have seven children together, two of whom were adopted from Haiti. After graduation Barrett worked as a law clerk for the late conservative Supreme Court Justice Antonin Scalia from 1998 to 1999. Later she returned to teach at the Notre Dame Law School. President Trump nominated her to the bench in May 2017.

The White House website stresses that “Judge Barrett would be the first mother of school-aged children to become a Supreme Court justice. She would also become only the fifth woman ever to serve on the court”. Her youngest child is diagnosed with Down Syndrome, and the news release doesn’t fail to mention that being “a mother of a child with special needs, she fully understands the issues and concerns that confront our nation’s most vulnerable”.

Barrett is a devout Catholic and a member of a conservative Christian group called People of Praise.

During her confirmation hearing in 2017, Barrett faced criticism for her strong religious beliefs, as questions of whether her faith could interfere with her jurisprudence were raised.

California Democratic Senator Dianne Feinstein wondered if she could keep her religious values from influencing her verdicts. However, Barrett insisted her professional rulings and her religious beliefs would be kept separate, saying “I would never impose my own personal convictions upon the law,” during the hearing. 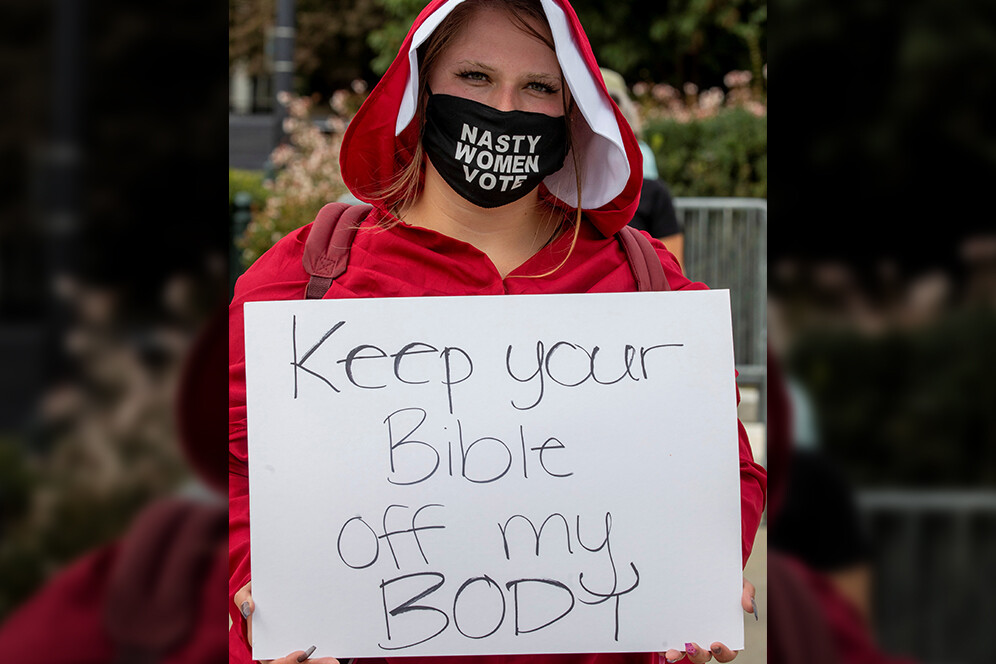 A protestor outside the U.S. Supreme Court the day after President Donald Trump announced U.S. Court of Appeals Judge Amy Coney Barrett as his nominee./REUTERS by Tasos Katopodis

However, liberals are concerned that her personal values could potentially threaten the 1973 Roe vs Wade decision that legalised abortions in the US and the Affordable Care Act, known as “Obamacare”. Barrett, who worked under Justice Scalia, shares his originalist approach to law: she believes laws should be interpreted based on the perspectives of the people who wrote them at the time. In her speech following the nomination, Barrett said that “A judge must apply the law as written. Judges are not policymakers, and they must be resolute in setting aside any policy views they might hold.” Like other originalists, she has at times criticised the practice of precedents that requires courts to apply the law in the same manner to cases with the same facts.

The confirmation hearings for Amy Coney Barrett are expected to begin on October 12, and they’re likely to be contentious.

California Senator and Democratic vice-presidential candidate Kamala Harris, who sits on the Judiciary Committee is expected to question Barrett aggressively. The proceedings will be televised and may exert some influence on voter turnout on November 3, so Barrett’s performance in the national limelight will be of paramount importance. 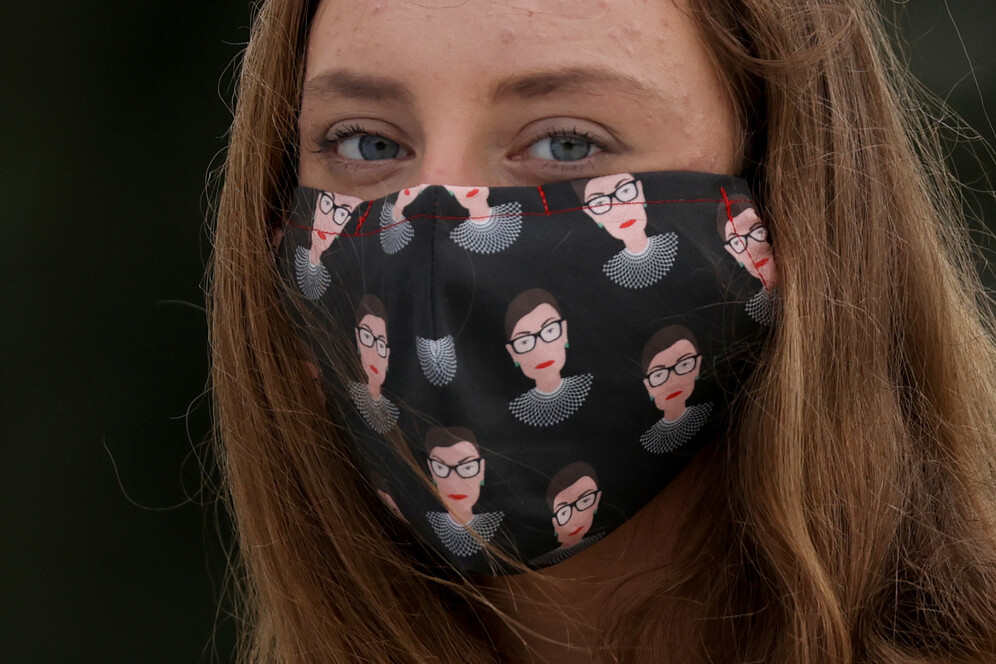 A mourner wears a patterned mask as she pays her respects to the late Justice Ruth Bader Ginsburg./REUTERS by Jonathan Ernst

Barrett is an ideological opposite of the liberal icon Justice Ruth Bader Ginsburg. Still, it looks as though Trump has been viewing her as Ginsburg’s viable replacement all along. First, Barrett’s name surfaced among the Supreme Court potential nominees in 2018 when Trump, eventually, decided to stick with Brett Kavanaugh. In several private conversations at the time, Trump reportedly said about Barrett “I’m saving her for Ginsburg”. However, at the time, Judge Ginsburg had no plans to retire despite her advanced age and multiple ailments.

Commenting on Judge Barrett’s nomination, House Speaker Nancy Pelosi made a list of issues central to the current progressive agenda that could be undermined by Barrett’s appointment: “Everything hangs in the balance with this nomination: a woman’s constitutional right to make her own medical decisions about her own body, the right of LGBTQ Americans to marry who they love, the right of workers to organise and collectively bargain for fair wages, the future of our planet and environmental protections, voting rights and the right of every American to have a voice in our democracy.” 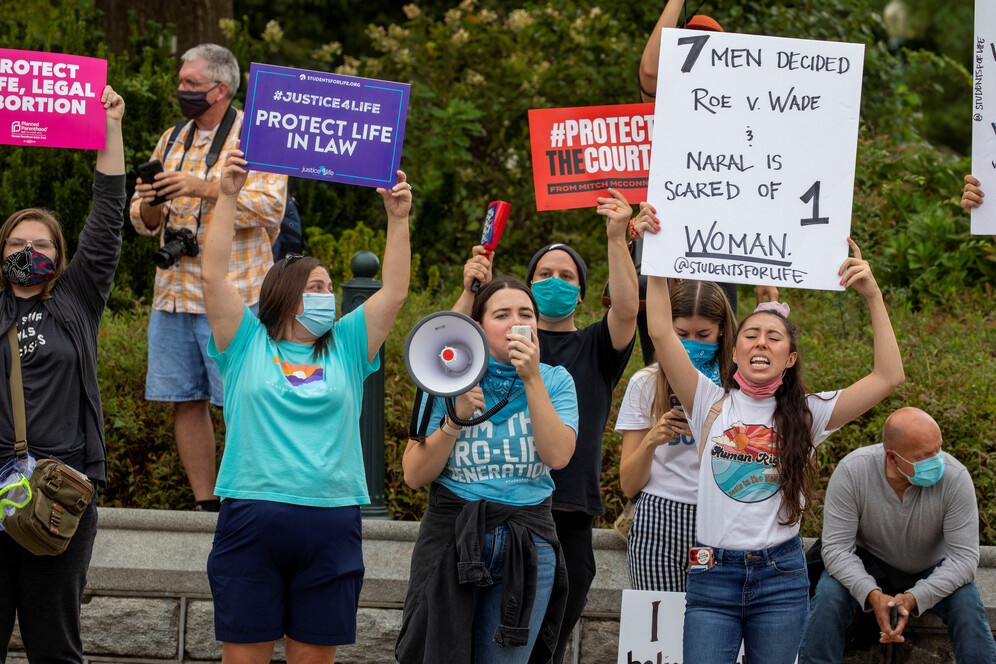 Apart from those issues, Barrett’s stance on business-related cases is also yet to be discovered, as she hasn’t ruled many. Still, since conservative judges tend to be more business-friendly and anti-regulation, this may likely be the case with Barrett. Should she be confirmed, she may soon have to examine some high-profile cases, including potential antitrust cases against several big tech companies, including Alphabet, Facebook, and Amazon, should they come before the Court.

The nomination of Judge Amy Coney Barrett, selected to fill a vacancy on the Supreme Court, was Trump’s third nomination to the high court in just under four years of his presidency.

If it plays out well for her and she gets confirmed, Trump’s presidency will leave a legacy of historic proportions with the most justices nominated in one term since President Richard Nixon. His other appointees Neil Gorsuch and Brett Kavanaugh were instrumental in securing the conservative majority on the court. When Trump was elected, the court was split down the middle, after Senate Majority Leader Mitch McConnell blocked Obama’s nominee, who would have ensured a progressive majority. Should Barrett be confirmed, a conservative tilt would likely endure for decades to come. Trump, in return, admitted that his political destiny might very much depend on the Supreme Court. Days before announcing the nomination, he was extremely transparent on the subject: “I think”, he said, “this will end up in the Supreme Court. And I think it’s very important that we have nine justices. It’s better if you go before the election because I think this scam that the Democrats are pulling — it’s a scam — the scam will be before the United States Supreme Court. And I think having a 4-to-4 situation is not a good situation.”

If the outcome of the election should indeed fall to the Supreme Court, as it did in the 2000 election, Trump wants to do everything within his power to secure a favourable outcome.

At eight justices, with five Republican and three Democratic appointees, the court possibly could back Trump, but that isn’t cut in stone.

So, if confirmed, Amy Coney Barrett could become the person to decide the outcome of the 2020 US election and, perhaps, the final straw to eliminate the Supreme Court as a check against the president’s actions.