From 9/11 to US troops' withdrawal: what 20 years of American presence have done to Afghanistan
The World on the Brink of WW II: The Appalling Facts Western Countries Try to Silence

The Power of Beauty: To What Lengths People are Ready to Go for the Sake of Beauty?

The global beauty industry may be worth hundreds of billions of dollars, but plenty of people around the globe judge beauty by very different standards. RTD lists five unique beauty trends from different cultures and people’s extreme practices to change their appearance.

1. The bigger, the better in Mauritania 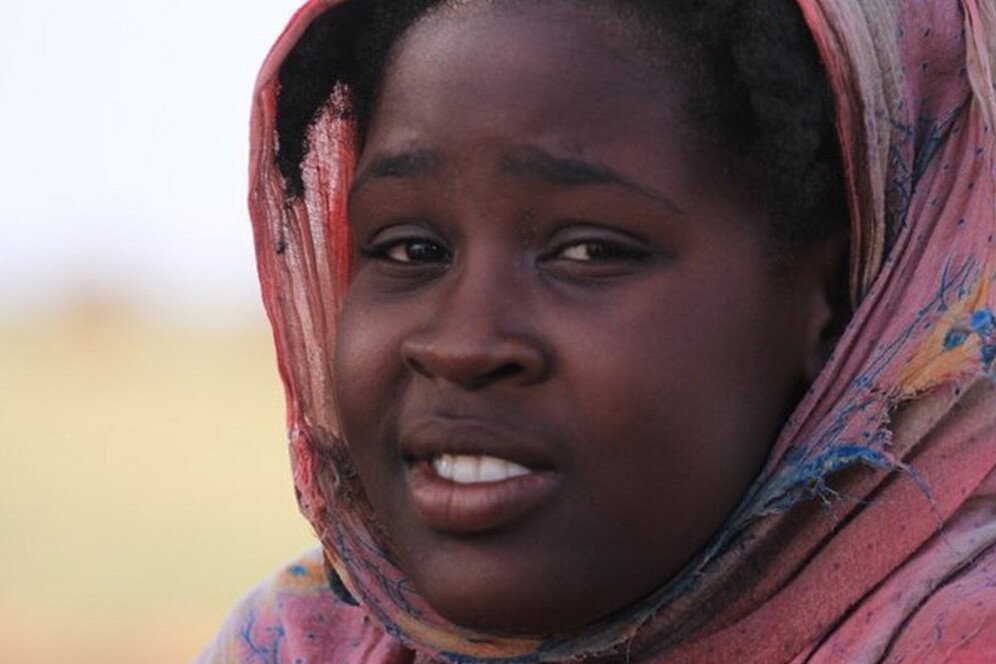 In Mauritania, a corpulent figure is seen as a sign of good health

While women throughout the Western world continue to dabble with new diets to lose weight, overweight figures are in vogue in Mauritania, a desert country in North-West Africa. In rural areas, people still believe “a big woman takes a big place in man’s heart” and consider fat and stretch marks a badge of wealth.

Mauritanian girls as young as four are put through ‘leblouh’ or force-feeding to put on the desired pounds. Local families send their daughters to special ‘fattening camps’, where older women feed the girls from dusk till dawn with copious amounts of milk, couscous, and butter. If a child refuses to eat, force-feeders squeeze her toes with sticks to open her mouth so they can continue.

The force-feeding ritual in Mauritania is called ‘leblouh’

In the past, some girls were even fed a poisonous plant extract, “aish”. While it helped them rapidly gain weight, several girls died.

Despite the influence of the internet, local beauty standards have gradually changed. However, as health concerns emerge as larger women get older, many people, especially in rural areas, still prefer their traditions and Mauritanian force-feeding continues.

2. The longer, the better in a Thai-refugee community

The Padaung, or the Kayan, sometimes referred to as the “giraffe-women”, are refugees from Myanmar who live in guarded villages on the northern Thai border and are famous for their long necks coiled in brass rings.

Girls from the Padaung tribe start wearing about 3.5 pounds of brass coils around their neck from an early age. Every few years, they have more rings added to achieve a look of an elongated neck. The brass “collar” of adult women usually weighs over 11 pounds. 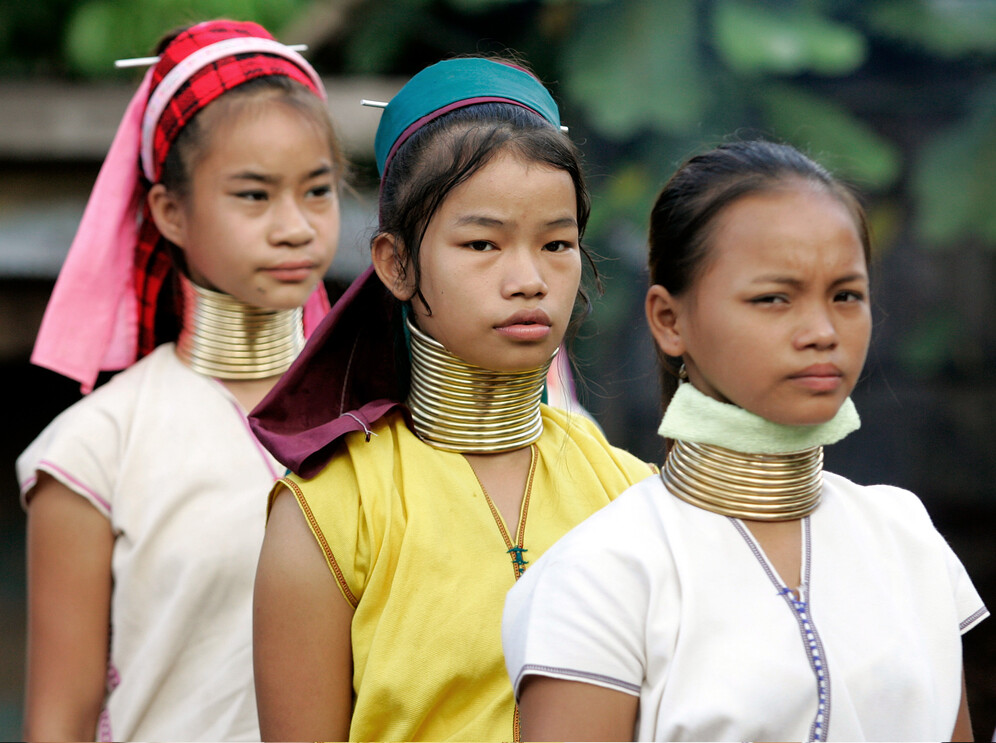 Though it seems like the coils stretch the women’s necks upward, the elongation is the result of the heavy rings crushing their collarbones down. The Padaung say the coils were painful when they were young but don’t hurt when they grow up. They also say there are no health issues associated with this neck-stretching practice.

The history of this particular tradition is a mystery. One theory says the rings helped put off men from rival tribes by making the women less beautiful. Today, a long neck is seen as an attribute of beauty, so Padaung women wear golden coils as an accessory.

In the past, the Padaung villages have become a popular tourist attraction. However, some human rights groups have sounded the alarm that local authorities exploit refugees who can’t find work. The Padaung are allegedly banned from resettling outside the tourist villages and have limited health care and education.

3. Beauty and the bleach in Africa

Most African countries gained independence a century ago, but Europeans still set the tone here. Today, that’s not only true in terms of outfits but skin colour as well. The lighter ‘café au lait’ colour is the craze of the day for female beauty.

Pharmacists have come to the rescue of fashion-maniacs. They offer a wide range of skin-lightening products but hardly warn the buyers of the possible crippling side effects of using them. Moreover, some pills and cremes contain dangerous substances that cause burns, severe acne, and even cancer.

Skin-whitening products are banned worldwide because of their catastrophic side effects, which include burns, severe acne, and cancer

According to the UN, 40% of African women use skin-whitening products, putting their health at serious risk in the quest for perfection. And the figures are even higher in some countries – 77% in Nigeria, 59% in Togo, 37% in South Africa, and 27% in Senegal.

Skin bleaching products have long been prohibited worldwide, but that doesn’t stop African women from longing to look like Europeans.

Maori are the indigenous people of New Zealand that today make up about 16 per cent of the country’s population.

Ta Moko – the art of tattoo – is a unique expression of Maori’s cultural identity. Though Maori wear tattoos on many parts of their bodies, the head is considered the most sacred part, so facial tattoos have special significance.

The tattoos may allude to the wearer’s personal history, social status, and occupation. However, as each Ta Moko reflects the individual’s unique life path, no tattoos are entirely identical.

In the early days, Ta Moko was carved into the skin. First, a rake-like instrument, typically made of bone or teeth, was used to cut the skin, then the pigment was tapped in with a flat-edged blade. Today Ta Moko artists mostly use the tattoo machine, though some pay tribute to the traditional and alternate between modern and traditional tools.

Europeans, who arrived in New Zealand in the 18th century, undertook several attempts to assimilate Maori into Western society and culture. However, the members of the ethnic group still managed to preserve their cultural identity and even unleashed a massive protest movement in the 1960s that continues to bear fruit. 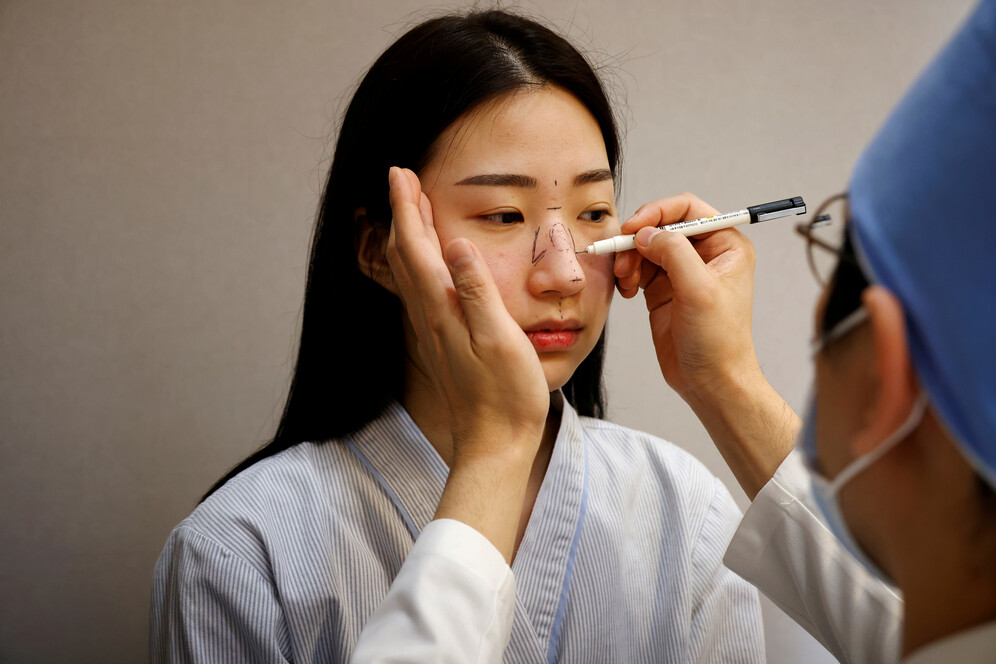 While the Western world is ardently advocating body-positivity, South Koreans are queuing up at plastic surgery clinics. In a Korea Consumer Protection Agency survey, 70% of respondents said they had undergone surgical interventions to improve their appearance.

“Make me beautiful” has already become a slogan for most South Koreans, with both men and women under the spell of the plastic surgery fever. While young girls strive to improve their marriage prospects through cosmetic surgery, men hope to boost their job prospects.

The age does not matter here. While Western high school students long for a new iPhone or a car, their South Korean peers can’t wait to have their first plastic surgery. A certificate for blepharoplasty (eyelid reshaping) or nose surgery is one of the most popular high school graduation gifts from parents in South Korea.

However, every coin has a flip side. For every happy patient, there is an unhappy one. Apart from lucky men and women who found love and boosted their job prospects, there are those who we usually call “the victims of plastic surgery”…

To what lenghts are you ready to go for the sake of beauty?