Experimental drug that “cured” Donald Trump of COVID-19 – All you need to know
Genetically Modified Kids: Brilliant Innovation or Crime Against Nature

Back in the 80s women were less likely to be selected for expeditions or jobs in Antarctica. The first women who set foot on Antarctica were accompanying their explorer husbands. In 1988 a team of ten Soviet women left their homes, husbands and kids, for an ultra-long ski trip to the South Pole.
The all-female crew, called Metelitsa, was composed of doctors, radio engineers, and ecologists. A passion for extreme adventure united them all. They were breaking the stereotypes which had kept the Southern continent closed to female explorers.

Days before the dreams of Antarctica

"Sharp pain. Medical help. My left leg suddenly fell after my Järvinen skis crunched and broke while crossing the ditch"

There was no fracture, but as it turned out later, I got a crack in my ankle. It hurts, but I had to go,” Valentina Kuznetsova wrote in her diary during the Moscow - Tornio ski marathon in 1969. Kuznetsova was a radio engineer and a national ski champion and participated in scores of ski championships. She was invited to join the national ski team. Her husband supported her efforts. Often Mikhail had to to take over all the family responsibilities and stayed at home with their daughter. 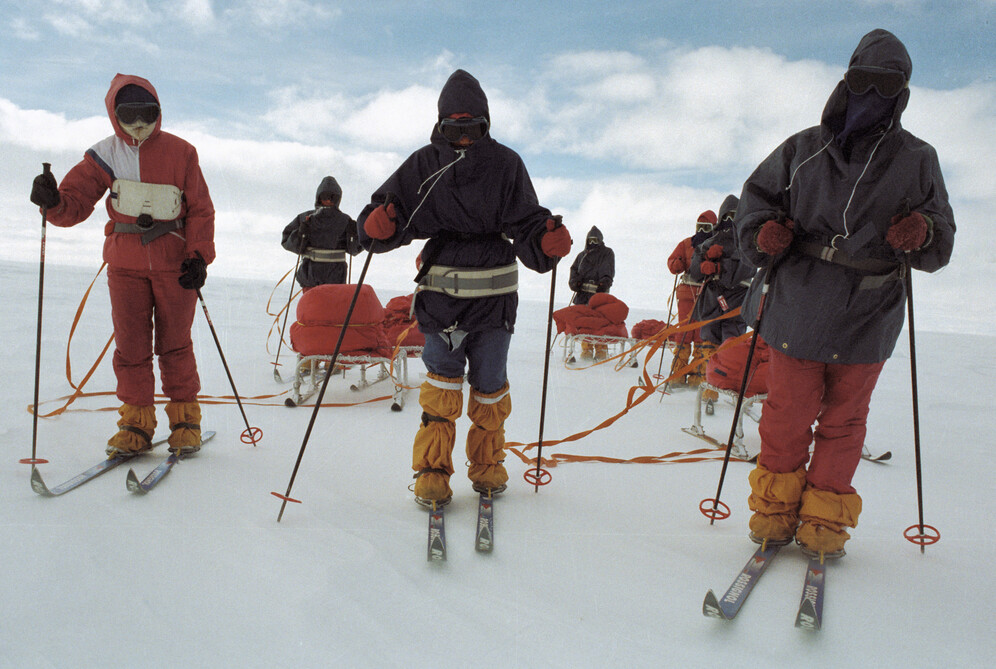 Amateur skiing was quite popular in the USSR in the 60s. Students actively participated in ski races and many trained while having regular jobs. In her 30s Valentina decided to focus on sport and put together an all-female team for long ski trips. Five girls, graduates from the Aviation Institute, joined the team and led by Kuznetsova, they travelled hundreds of kilometres in their first two trips from Moscow to St. Petersburg, and from Moscow to Smolensk. Their next target was to reach Finland and get from Moscow to Tornio in a month while covering 2,600 km, the longest trip they had ever done.

January 1969 the group of five women travelled from Moscow to their next stop in Helsinki. They were covering 80-90 kilometres a day and rested every fourth sunset. They woke at half-past six then had a quick breakfast and returned to skiing. Suddenly Valentina beaks her leg, and that almost undermined the whole run. Despite exhausting pain, she decides to continue the trip.

The Russian word Metelistsa, which means blizzard, had been making headlines in Finland ever since the team crossed the border.

Newspapers reported on how the Russian skiers fared, how far they walked each day, at what speed, rivalling to predict their route. But recognition came at a high price for the Metelitsa team leader. The pain in the leg was exhausting, and a Finnish doctor advised her to rest for three days. But this never happened and the team finished their month-long marathon in Tornio as planned. The finish in Tornio was broadcast on television throughout Finland. Swedish TV shot over a thousand kilometres to film covering the Soviet women’s triumph. The team had its first international recognition. This was the first time the Metelistsa team had skied as close to the Polar Circle, marking a new level in their sporting endeavours.

After Finland, the skiers, oddly enough, entered a period of depression. Sporting events seem too ordinary for the girls. When suddenly their ski coach Yuri Levushkin offered a solution. He proposed the idea of a first women’s ski expedition to the South Pole. The preparations for the journey started in April 1974, and the Arctic became a testing ground for Metelitsa.

The women made over a dozen Arctic ski expeditions including eight trips to the Northern Pole. Eight expeditions made it to Franz Josef Land, which is called mini-Antarctica for its severe climate and never-melting, thick ice surface. The group skied on the archipelago of Northern Land and camped on the drifting ice of the Arctic Ocean.

“Like everyone else here, I kept a knife under my head"

"In case the ice floe cracks and start moving away to the sea. You can cut the tent and jump out. If there is somewhere to jump,” wrote one of the Metelitsa participants in her diary.

Tested in extreme Polar expeditions ‘Metelitsa’ became a monolith: all for one and one for all. Many in the team were married, some had to leave their kids at home while the oldest Galina Rozhalskaya, world’s renowned alpinist had recently become a grandmother. One day while returning from the Arctic to the mainland, someone even said:

"Let’s not call anyone and live together for another day"

“The unknown did not frighten us but delighted,” Valentina Kuznetsova said in an interview with the Soviet press. “We understood what a serious burden we carry, and the responsibility we take when we are selecting people for the team,” Kuznetsova said.

The crew of ten chosen for the Artic was joined by more outstanding women - three radio engineers, two PhDs, a meteorologist, and a film cameraman. The start of the expedition was scheduled for the short Antarctic summer when the average temperature is -35°C. In 1988 Metelitsa finally reached the doorstep of their dream. Valentina was over 50 when the team arrived at Vostok, the remote Russian Antarctica base. The South Pole opened its doors to Metelitsa. 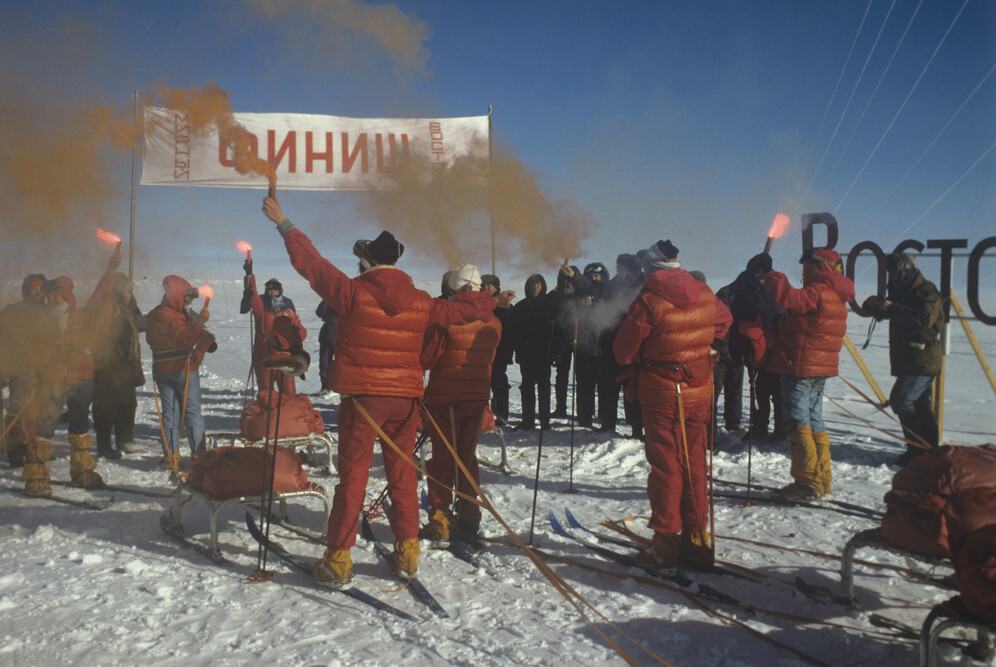 The team skied for 57 days in their longest ever marathon across 1,420 kilometres of Antarctic permafrost / Photo by Irina Kuznetsova / Courtesy Ria

The team skied for 57 days in their longest ever marathon across 1,420 kilometres of Antarctic permafrost. The skiers’ outfits were the best for the time: down suits and sleeping bags, fur mittens and high boots. For almost two months, the women faced conditions of low temperatures, strong winds, and high solar activity. The unique expedition was closely monitored by Soviet scholars who were eager to examine the physical and psychological endurance of the skiers, who were becoming well known all across the Soviet Union. 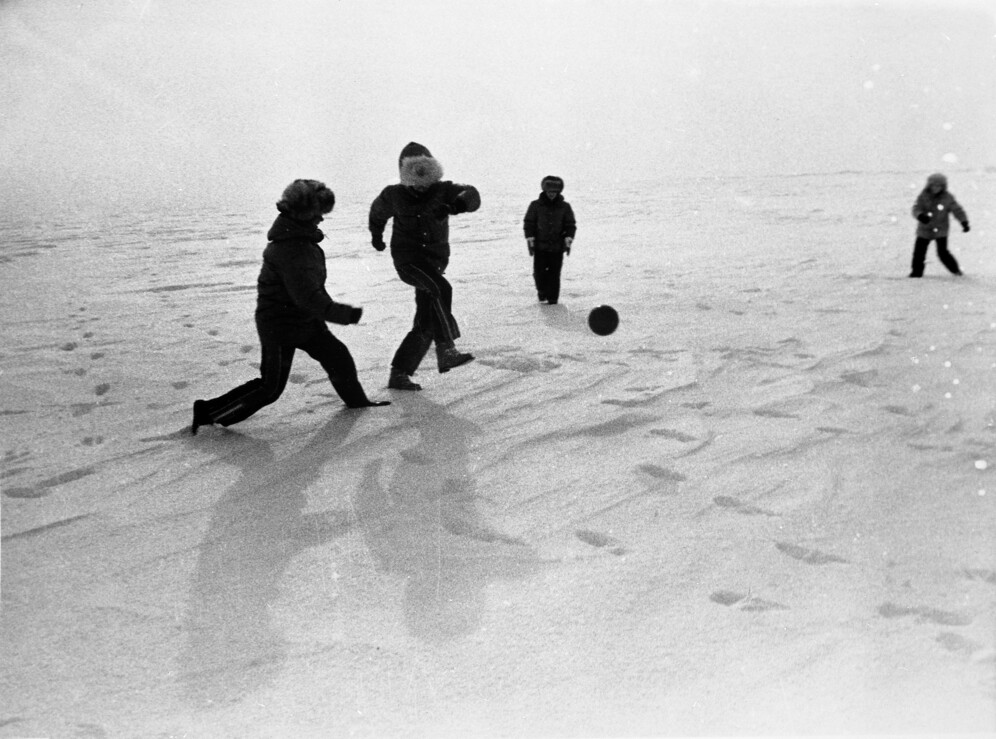 Last year marked fifty years since the brave, driven women crossed Antarctica as part of the first all-female expedition. Their final journey was in 1996 when Metelitsa returned to Antarctica and set the flag of the Russian Federation. In 2010, the founder and permanent leader of the legendary women’s ski team Valentina Kuznetsova died, she was 73.