Bunker Bonanza: why the US market for survival shelters is booming and what Trump has to do with it

In the United States, there are plenty of companies that sell survival shelters of all kinds, from tubes that can be buried in your backyard to abandoned military bunkers that you can refurbish yourself. What explains the current success of this particular segment of the real estate industry?

To persuade customers to invest in their own survival, shelter providers don’t hesitate to go for the hard sell. "It’s a harsh reality to realize that we live in a world where we have to consider protecting our families from widespread destruction, such as nuclear, biological and chemical attacks. Not to mention terrorist attacks, intruders who come into our homes kill, rape, kidnap and burglarize, then there is Mother Nature when she gets angry and throws some pretty dangerous disasters that we need to protect ourselves from. It’s much better to face the facts and be prepared than to have to scramble at the last minute for a contingency plan”, claims a North American company that has specialised in “providing the latest advancements in shelter technology, true Nuclear-Biological-Chemical (NBC) sealed systems” since 1990. 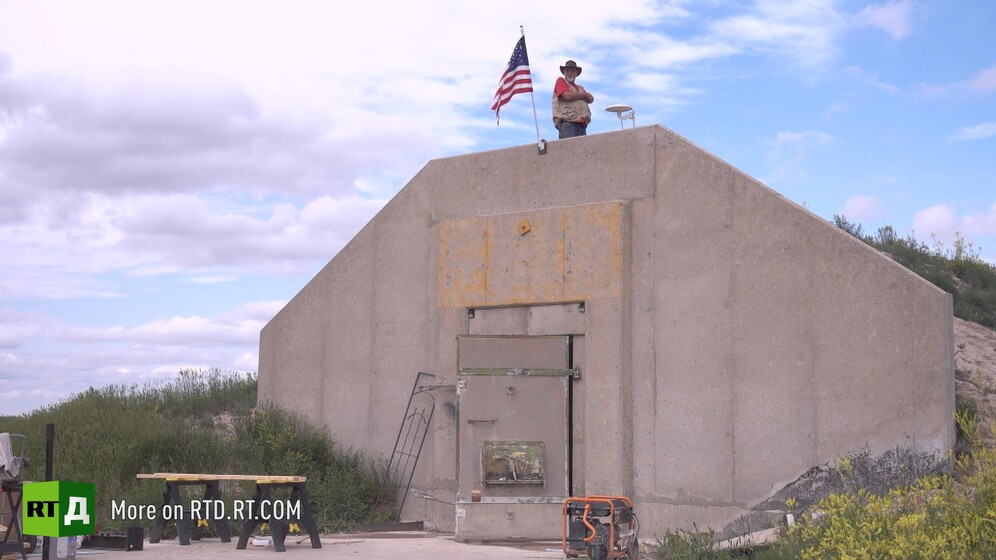 The US survivalist movement is deeply rooted in the American ideal of self-sufficiency.

This message resonates with the survivalists who form the industry’s customer base. Milton Torres bought a 200-square-metre shelter. It’s one of 575 empty nuclear bunkers lying in a field in South Dakota, which claims to be the “largest private shelter community on earth". “I was in the military, I know how the government works, and I don’t want to put money into that,” he tells RTD in the documentary film Armageddon Ready.

'I don’t believe they’re gonna protect me when the time comes. So the only way you can protect yourself is by protecting yourself.'

As for Roberta L. Griffin, she decided to buy a cylinder-shaped bomb shelter as protection against the disruption caused by planet Nibiru. “There’s a planet coming through […] It’s supposed to pass through between the sun and us. And can you imagine something as big as the Earth doing that – it’s gonna cause tidal waves, earthquakes, volcanoes are gonna erupt, and it’s gonna tilt, so we’re in for a wild ride,” she admits to RTD. 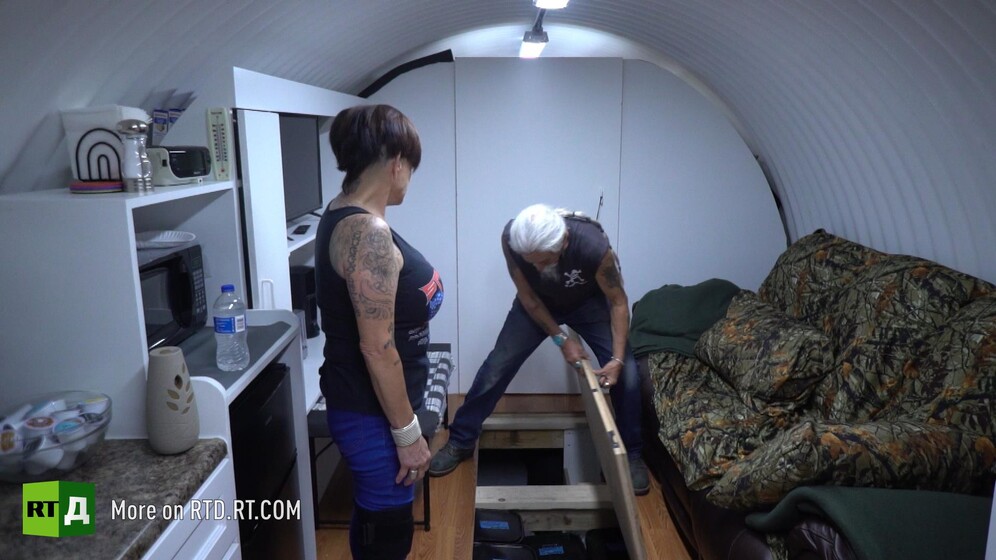 Roberta  L. Griffing and her husband have enough stocks of food to be able to stay underground for months in the event of a cataclysm.

Suppliers cater for every budget. Milton Torres’ bunker is currently being marketed at $35,000, plus ground rent of $1,000 a year. Another nuclear bunker maker, whose motto is “We don’t sell fear. We sell preparedness”, asks for $37,500 for its cheapest shelter, a mini-bunker that measures just under 9 square meters.

The same companies also sell much pricier offerings for the high end of the market. One underground bunker complex sells for up to $8.35 million. For that price, you can accommodate 50 people, some in isolated master bedrooms. The complex includes a gym, sauna, swimming pool and gun range.

Secrecy is very important to survivalists. This supplier doesn't know where many of its customers base their shelters

Another leading brand has developed a former nuclear missile silo in Kansas to house luxury survival condos. As well as a pool and high-end specs, the deal includes mandatory training and five years’ worth of freeze dried food supplies. The compound also has a room to grow hydroponic vegetables. The cheapest option in the survival condo is the half unit, which can house 3-8 people – price $1.5 million. A penthouse, on the other hand, will set you back $4.5 million. Raven Ridge of Kansas luxury survival condo provides every possible amenity to sit out the apocalypse in comfort. The developer,  even provides an escape from boredom, thanks to entertainment options that include a classroom, a theatre and a gym.

But if this is too expensive, you could just opt to have your DNA preserved in a vault. The same company offers this service for free to those who purchase its $30 DNA donor kit, “for their own future regenerative medical needs, or even for the preservation and potential restoration of the human race itself!” 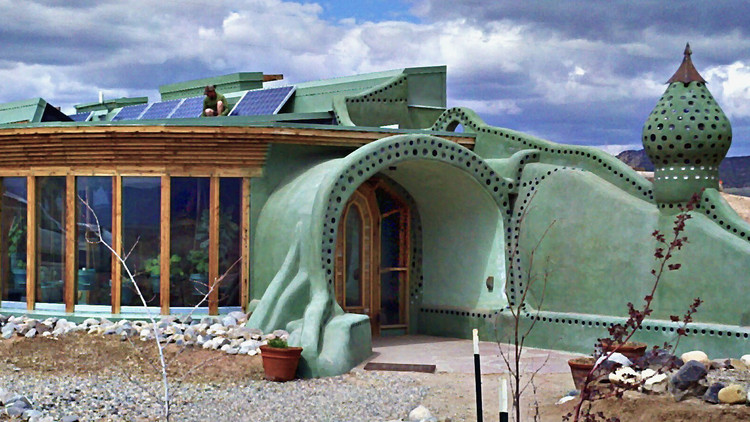 The current frenzy in the survival market echoes a similar craze in the early 1960s. Historian Thomas Bishop analyses the phenomenon in his book. Between 1961 and 1963, salesmen started touting nuclear survival shelters that could be installed in your backyard. From 1961 to 1963, that is from John F. Kennedy’s “Ich bin ein Berliner” speech to the Cuban Missile Crisis, fear of nuclear bombing by the USSR created a market for family nuclear fallout shelters. “According to Consumer Reports, a total of 200,000 home fallout shelter assembly kits sold between 1961 and 1962.” However, the enthusiasm was short-lived. Public complaints about unfit-for-purpose shelters and accusations of cashing in on people’s fears led to a sudden slump in the market. Businessmen ended up with unsold stock.

Vivos Luxury survival condos have a starting price of $1.5 million

In the 21st century, however, growth in the survival shelter market seems solid. Worrying events such as Hurricane Katrina and the civic chaos that resulted happen often enough to reignite demand. Traditionally, political conservatives have formed the bedrock of the survivalist movement. Thus, when Barack Obama was elected US President in 2012, many thought he would take away their guns. They were nuclear bunker maker CEO Clyde Scott’s first customers.

In turn however, Donald Trump’s election sparked liberal fears of a nuclear war. “We’ve had liberals coming out of the woodwork to protect themselves,” he recalls.

“Right after Trump’s election, business went out the roof."

Overall, Jeff Schlegelmilch, the deputy director of the National Center for Disaster Preparedness at Columbia University, told The Atlantic, the luxury-bunker trend is “not just a couple of fringe groups; there is real money behind it—hundreds of millions of dollars.” During the Cold War, US government campaigns aimed to prepare people to "duck and cover" in the event of a nuclear attack by the Soviet Union. The private sector also got involved, leading to a boom in sales of family nuclear shelters.

So, if 1960s America was able to see past the threat of nuclear holocaust, why are its present-day citizens not giving up on their dream of their own bolthole? Clyde Scott tells CNBC:

“I’ve done a shelter for a dentist, and the entire theme for his bunker was to literally go hide from his wife and get drunk.”

As for Roberta Griffin, it’s not just planet Nibiru she’s protecting herself from: “I like being alone sometimes, so. It’s just quiet. You don’t hear anything at all. Not even flies come down here. It’s my girl cave.”

Want to know how the luxury condos in the former missile silo look on the inside? Take a sneak peek with our documentary - Armageddon Ready.