Rise & fall of the Caspian Sea Monster ekranoplan and its inventor

In August of 1967, US intelligence agencies were poring over some shocking photographs. In the pictures, an unknown machine that looked like an aeroplane, 100-metres long and weighing about 500 tons, was skimming over the waters of the Caspian Sea at a speed of more than 500 kilometres per hour. One of the Soviet Union’s most secret inventions called KM – or the Caspian Monster, as the Western press nicknamed it – had been captured by an American spy satellite. 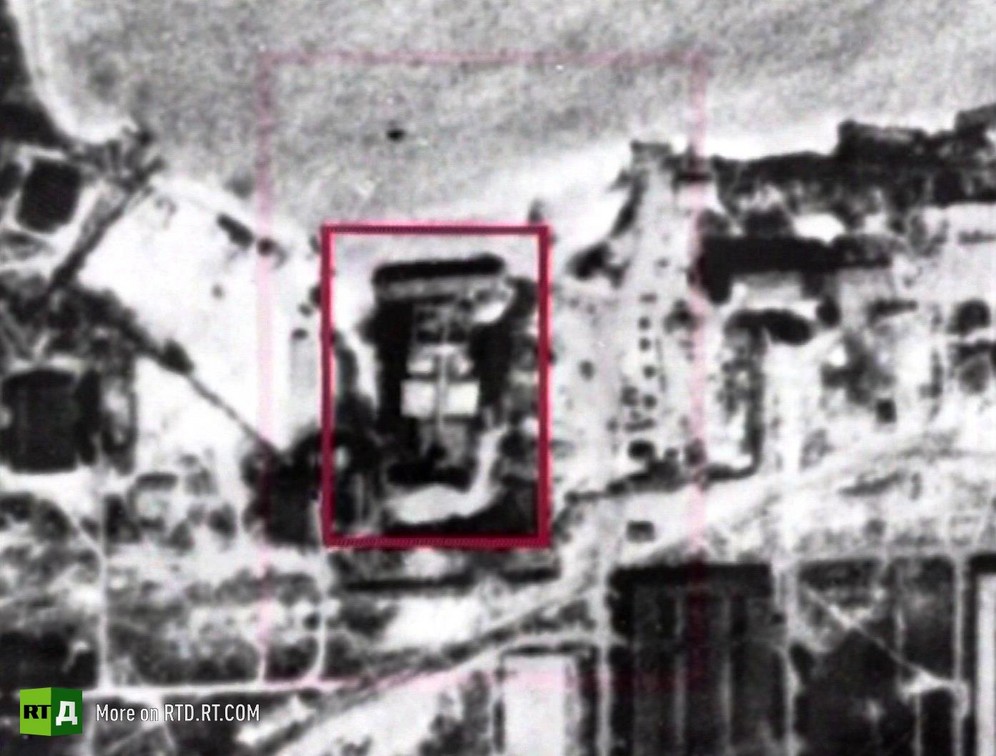 An image of the ‘Caspian Sea Monster’ taken by an American spy satellite. / RTD

The mega-aircraft had been developed by Rostislav Alexeyev, who got his start in the shipbuilding industry when watercraft were relatively slow. He came up with an unusual design that used underwater wings to push vessels up out of the water while they were moving. This reduced resistance allowed the craft to glide through the water more quickly – a real breakthrough. High-speed watercraft with space names such as Rocket, Meteor, Comet, and Satellite soon began zipping through the waters of the Soviet Union. 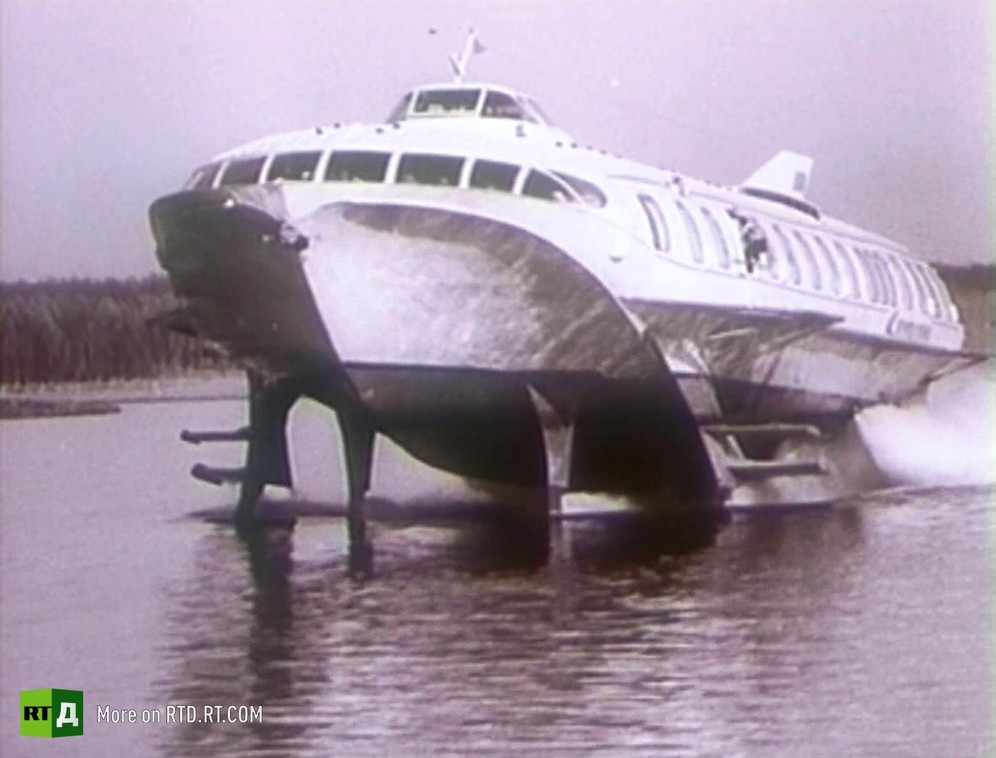 It’s not by chance that Alekseyev gave his vessels space names. The inventor was obsessed with speed. With his winged ships reaching speeds of 100 kilometres per hour, he conceived a plan to reach even higher velocities by lifting the vessel above the water. 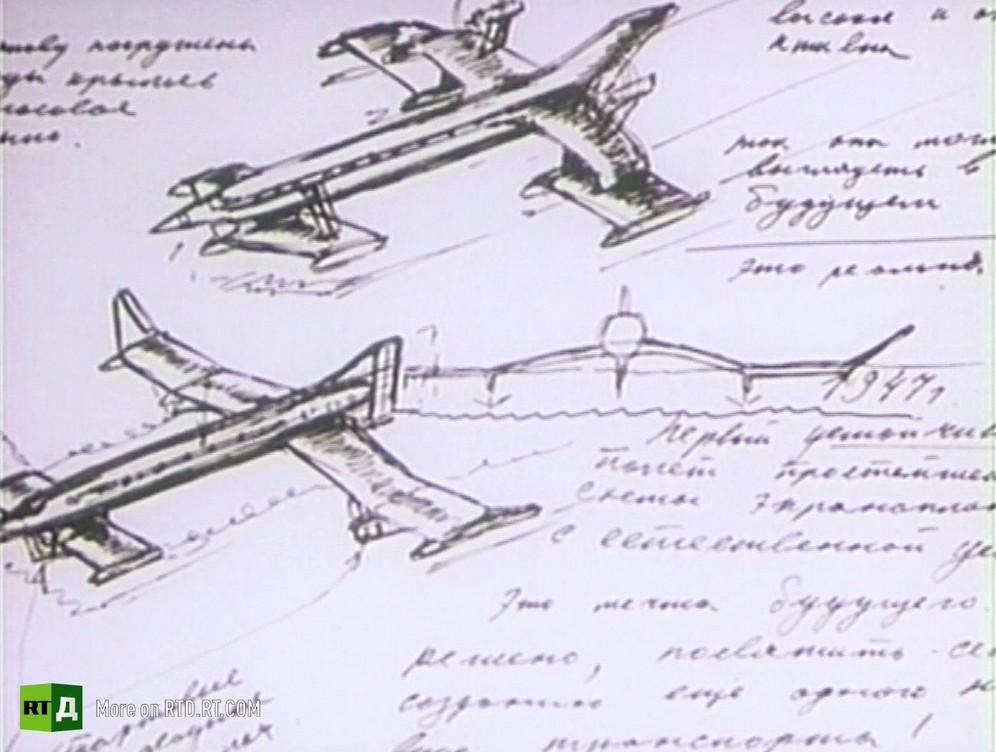 Rostislav Alexeyev’s blueprints from his family’s archive. The engineer envisioned a vehicle able to travel over water and land. / RTD

“Alexeyev was such a resourceful person; he was always coming up with new ideas. We were astonished when he first invited us to say he had an idea to use air wings to overcome the speed limitations of underwater wings. But air wings meant an aeroplane!” said Alexander Maskalik, an engineer in Alexeyev’s design centre. 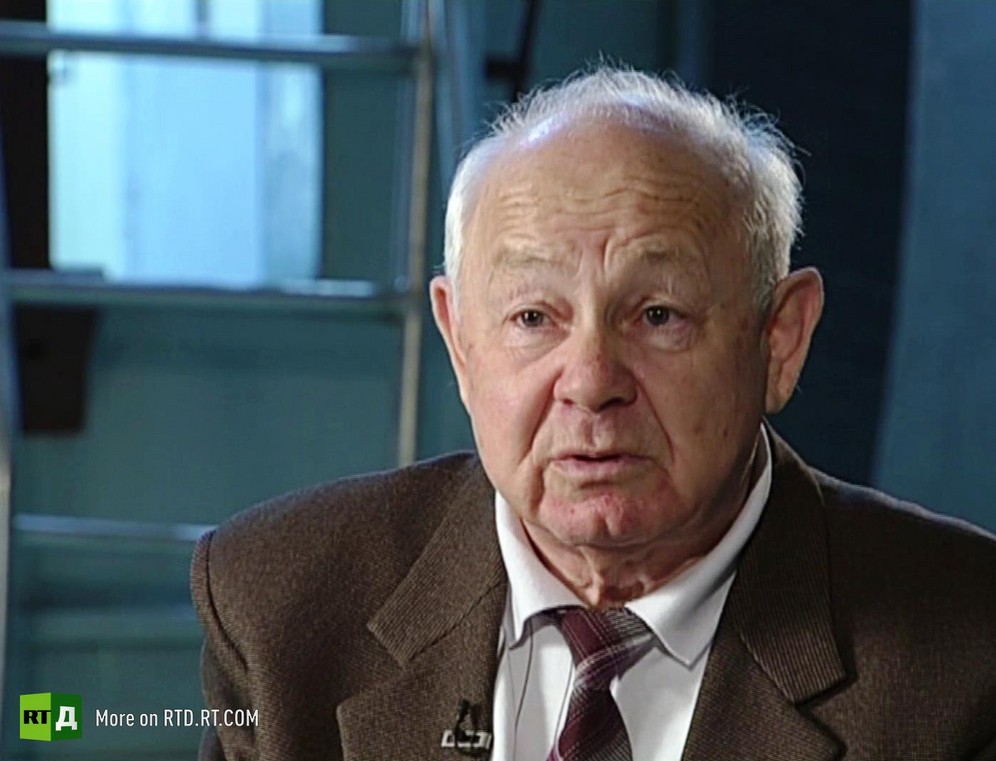 Alexeyev was impassioned by the idea of providing the USSR with a new mode of transportation that could move over ground and water using ‘ground effect.’ Though nearly nobody believed it would work, the design engineer was able to persuade Soviet premier Nikita Khrushchev to back his project. 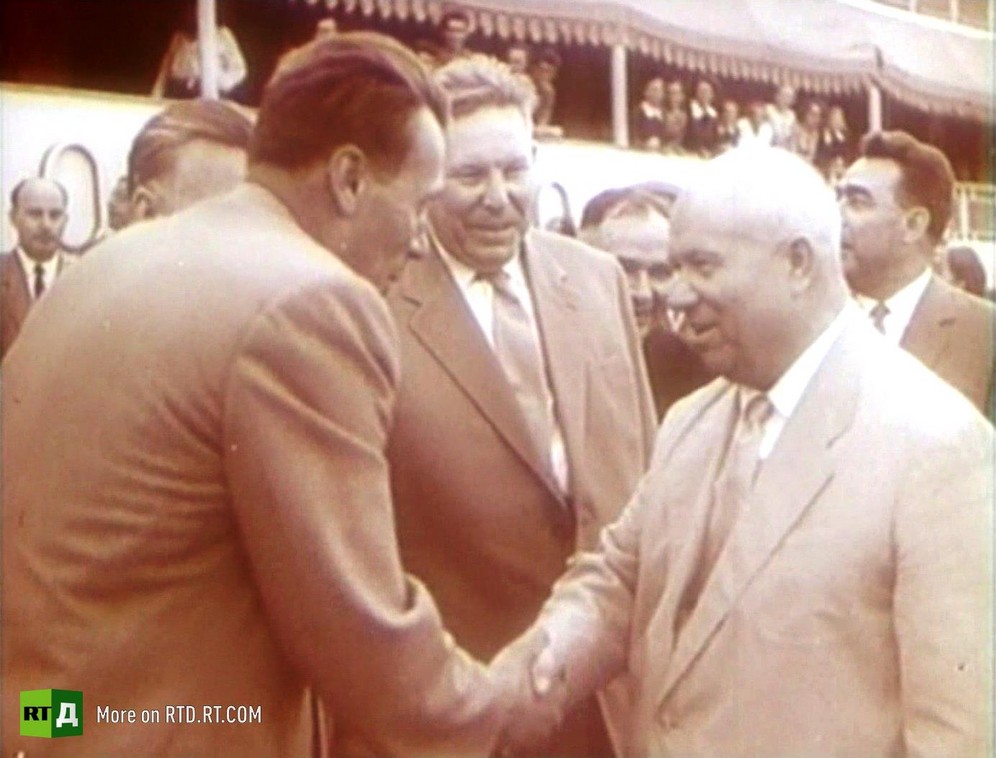 Rostislav Alexeyev shakes hands with Soviet Premier Nikita Khrushchev at a display of ekranoplans in 1962. / RTD

The USSR had set a goal of developing a vehicle that would make the country a superpower on the sea. According to Alexeyev, the Ekranoplan, or Screen Effect vehicle, would boast the colossal power, size, and speed to do just that.

The first challenge was to find a place where such a conspicuous vehicle could be fully tested in secret. This wasn’t easy. Alexeyev personally took part in looking for a suitable site. The test ground needed to be in a restricted area, away from cities, and inaccessible to the public.  It also had to possess a wide expanse of water where test manoeuvres could be conducted at high speed. In the end, the town of Chkalovsk in Russia’s Nizhny Novgorod Region was chosen, earning it the name “Mother of all Ekranoplans.” 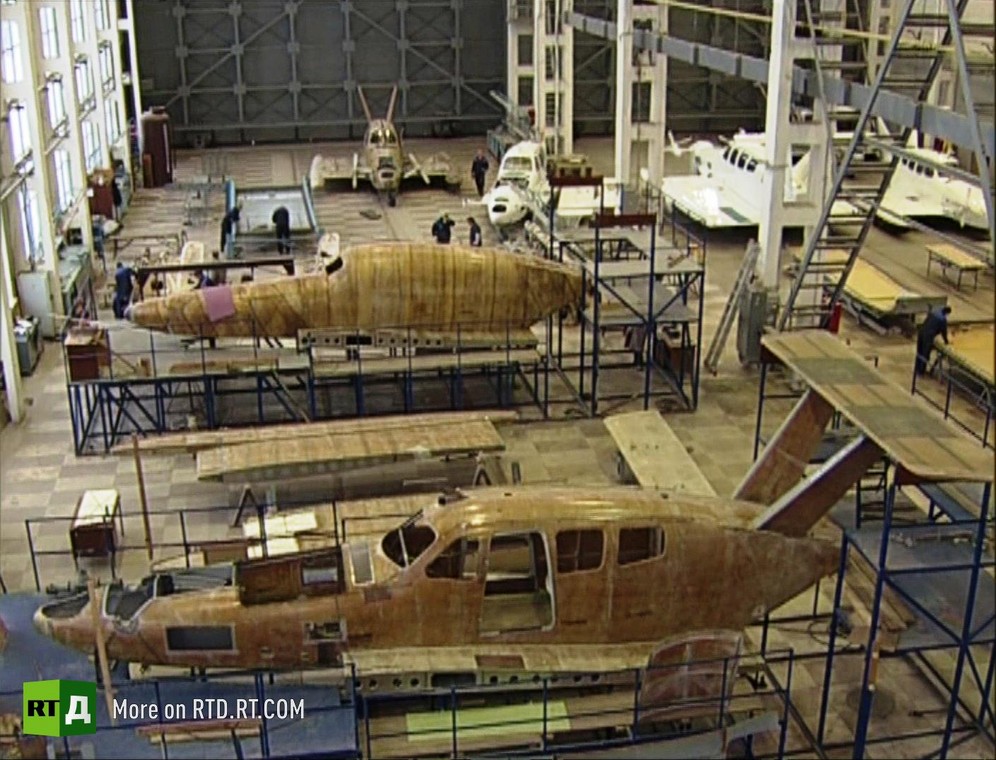 “A long time ago, when the aircraft industry was just beginning, planes had really weak engines and very long wings. At that time, planes had trouble landing because they were unable to touch the ground after descending to the runway. They had to be pressed against the ground by a diving rudder. That used to cause crashes quite often. This is how ‘ground effect’ was discovered,” Valery Neverov, a top engineer, recalled. 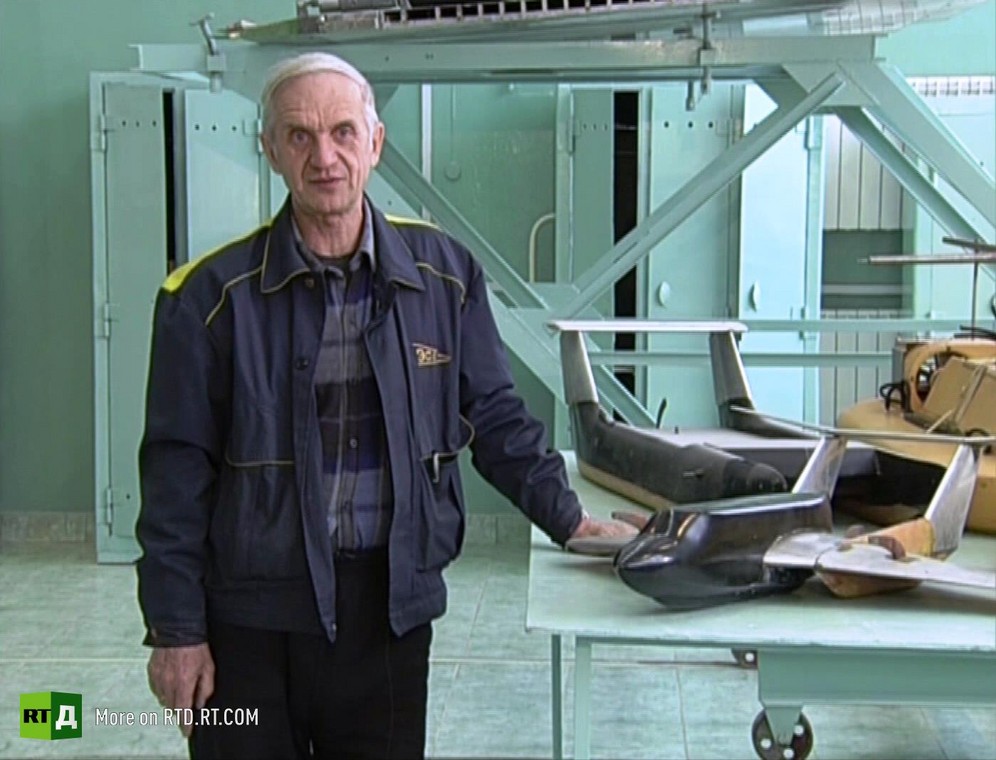 The first Ekranoplan – dubbed KM, or Dummy Ship in Russian – took two years to create. It was floated down the Volga River from Chkalovsk to the Caspian Sea test facility in complete secrecy. Its wings were detached and it was moved only at night, covered by a veneer case. It was first tested in the Caspian Sea in 1967. 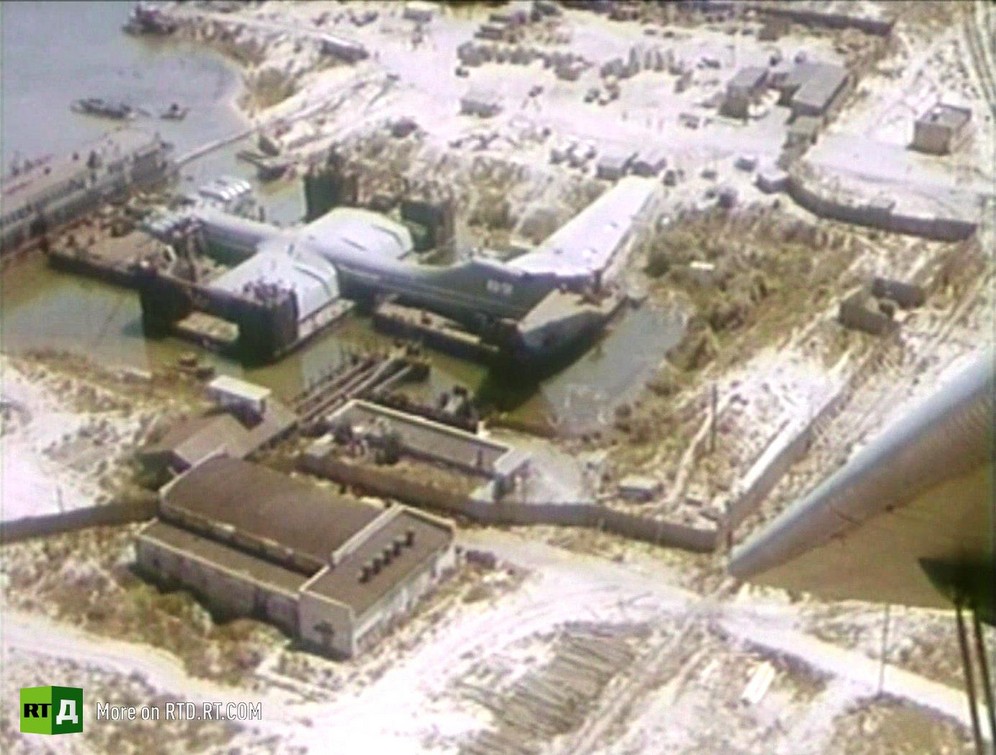 The first ekranoplan at a test site near the city of Kaspiysk on the Caspian Sea. / RTD

To avoid putting the lives of the project’s chief design engineers at risk, it was strictly forbidden for them to be on board Ekronoplans during test runs. 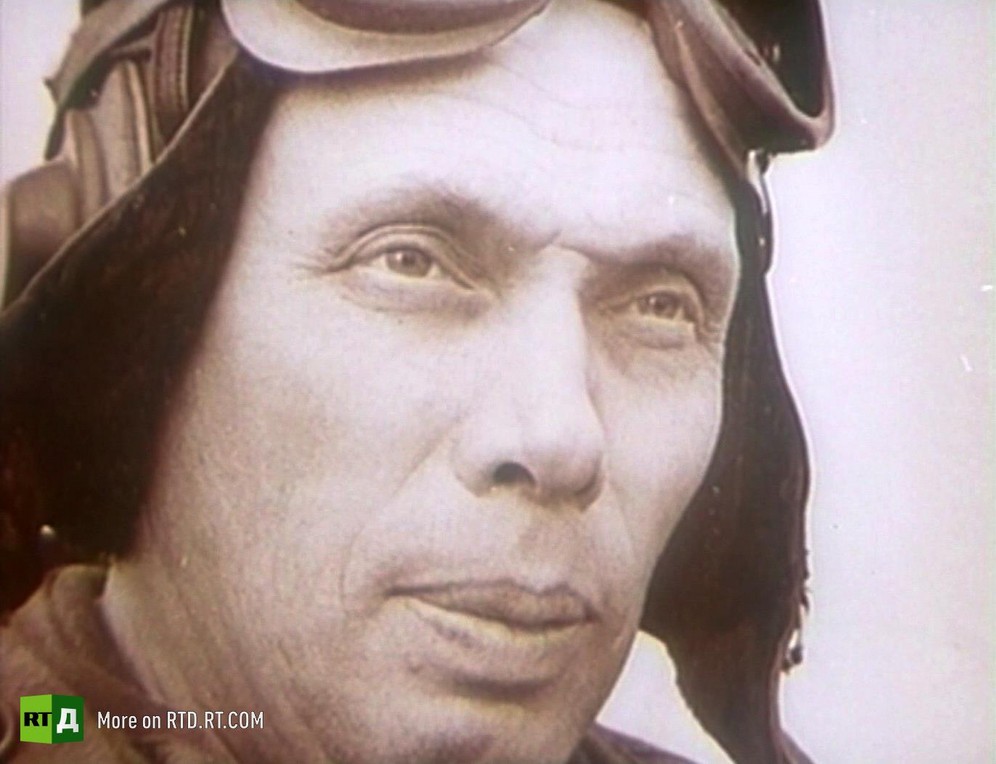 Rostislav Alexeyev learned how to fly a plane so he could co-pilot the first test run alongside Vladimir Loginov. It was against the rule which prohibited engineers from taking part in trials. / RTD

However, with the help of test pilot Vladimir Loginov, Alexeyev managed to skirt this prohibition and even take the controls on a number of occasions.

“I took Alexeyev on board because he was the one who created the machine. It was his baby. He needed to feel how it was acting while flying. He was able to improve its design because of that. That’s why I took him on board,” Loginov explained. 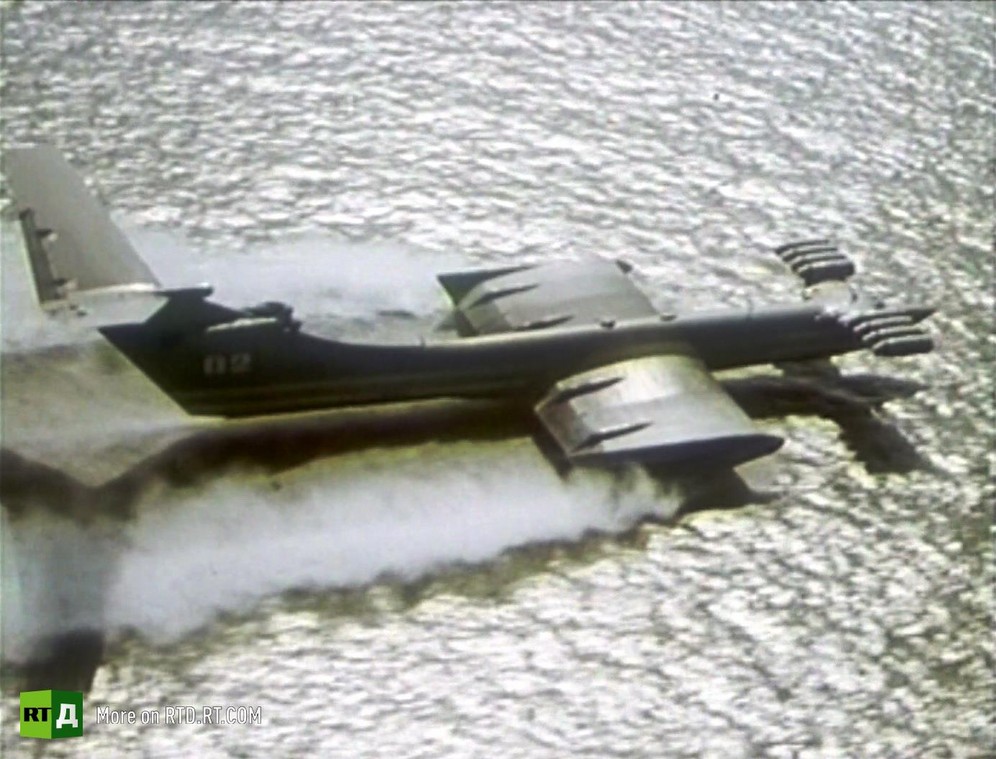 The ‘Caspian Monster’ once took off with a record-breaking 544-tonne payload. / RTD

The Caspian Monster was the prototype for all the Ekranoplans. Based on it, a transport version was developed to move military equipment and troops to combat areas. Dubbed the Orlionok, it was invisible to radar and could even fly over minefields, making it perfect for launching surprise attacks. 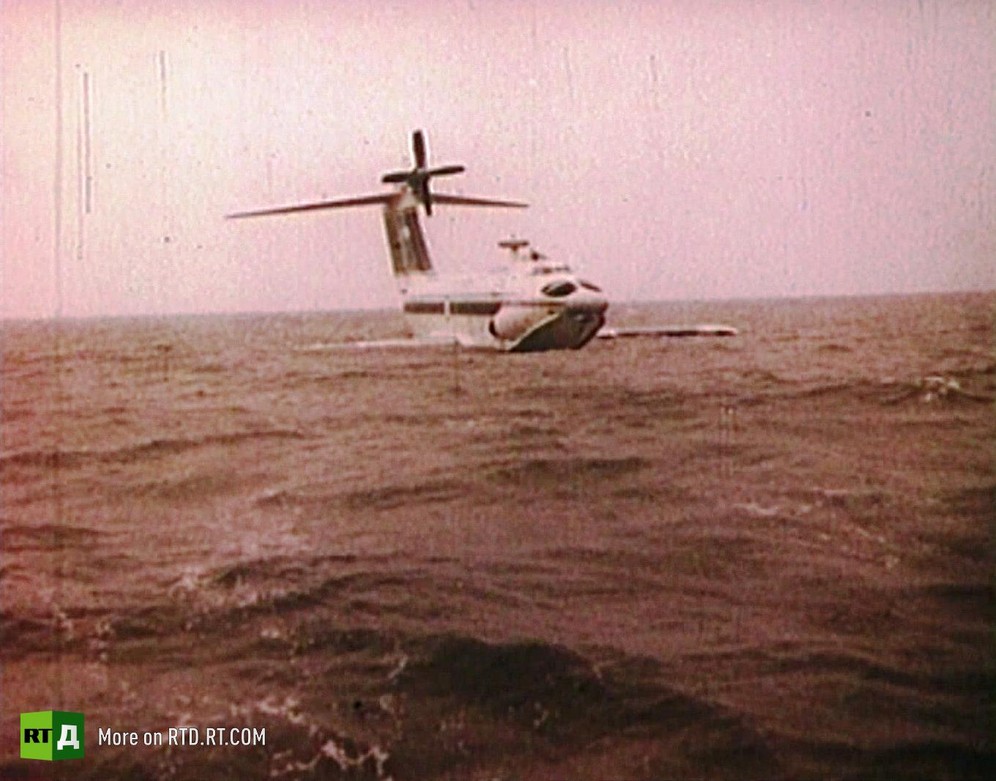 The troop-carrying Orlionok (‘Eagle’) was developed to carry soldiers and equipment to war zones. / RTD

In 1974, the Orlionok struck a wave while being tested in very rough waters. The blow knocked off sections of its stern and tail. Alexeyev, who was on board at the time, took charge and managed to bring the Ekranoplan safely back to base. Though the accident appeared to demonstrate the craft’s durability, the incident was used as an excuse to remove Alexeyev as the project’s chief design engineer.

Alexeyev died in 1980 at the age of 64. The Caspian Monster’s life ended the same year in a devastating crash resulting from crew error. It had been in operation for 15 years. 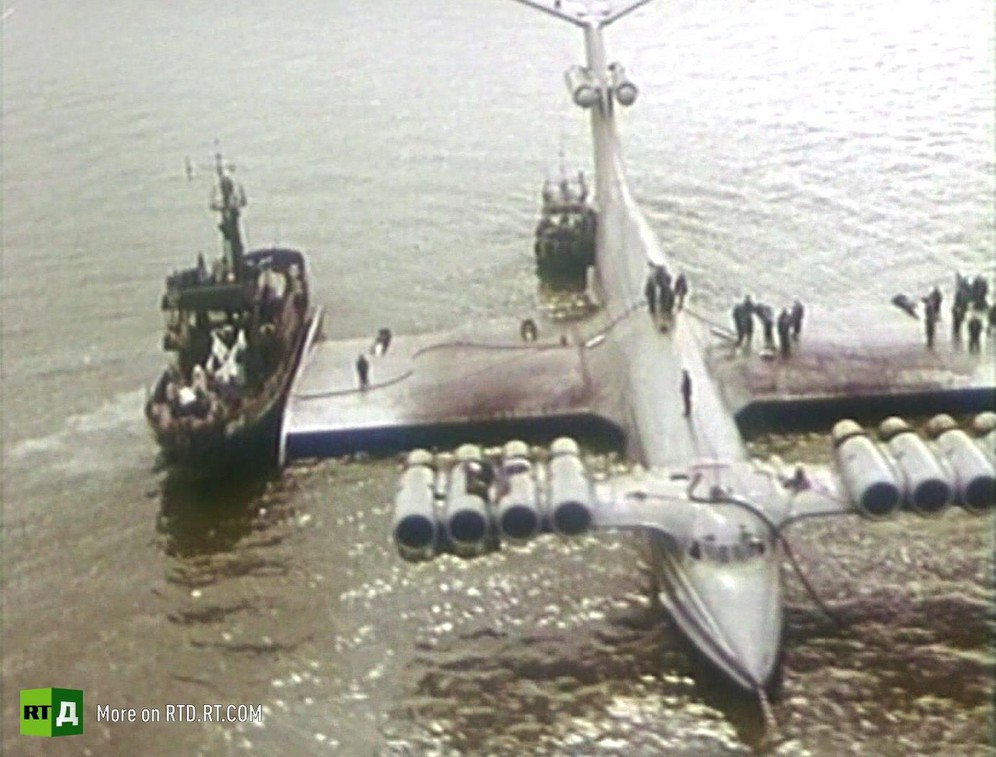 Only one Ekranoplan was built after Alexeyev’s death – the Lun. It was a missile-carrying craft that could launch six Mosquito rockets, immediately earning it the nickname “aircraft carrier killer.”  In the mid-80s, funding for the Ekranoplan program was diverted to developing atomic submarines. After the collapse of the Soviet Union, the project was shut down completely. 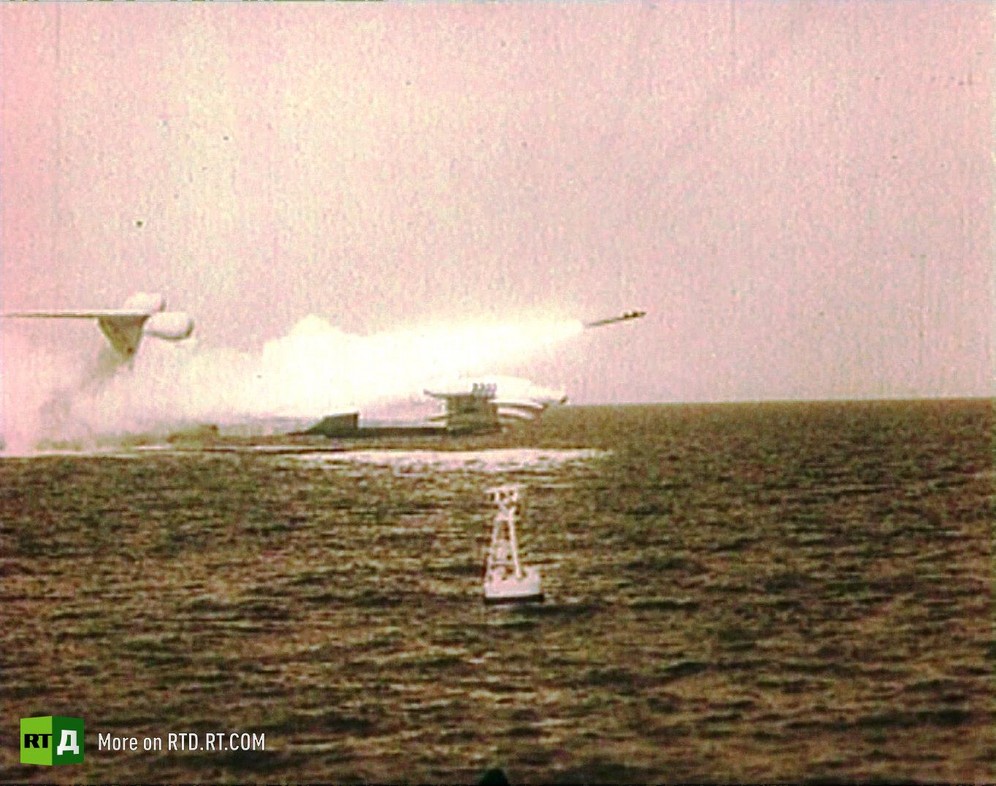 Today, there are several companies around the world trying to invent crafts based on the Soviet Union’s Ekranoplans. So far these attempts have been unsuccessful – the vehicles either refuse to fly or wobble uncontrollably.