The Biography of the Glasgow Smile, the Trademark Torture Method of Scottish Gangsters
Project Babylon: Man behind Saddam’s Supergun

A new type of marriage is gaining popularity in China. It’s called Liang tou hun, or two-sided marriage. It is being adopted because of the country’s fast-changing economic and social context and growing contradictions between family traditions and the consequences of the one-child policy. Urbanisation, women’s emancipation, and modern lifestyle add to that.

Spouses living apart has become common in China. At first glance, such a marriage resembles Swedish “särbo”, a type of partnership where parties live separately and spend time together only on weekends, holidays or special occasions. In the Chinese version, a husband lives with his parental family, while the wife stays with hers. A couple in such marriages can have two children, and, as a rule, one of them gets the mother’s last name, and the other one goes to the father and bears his family name.

The appearance of this new marriage arrangement stems from the economic situation.

New couples are forced to rely heavily on their parents when it comes to babysitting. Young people who have just started working after university and continue to live with their parents want to start a family and have children. However, they are not ready for a wedding and a separate life together. They don’t have enough money and have yet little trust in each other. So, they agree to a “separate marriage”. 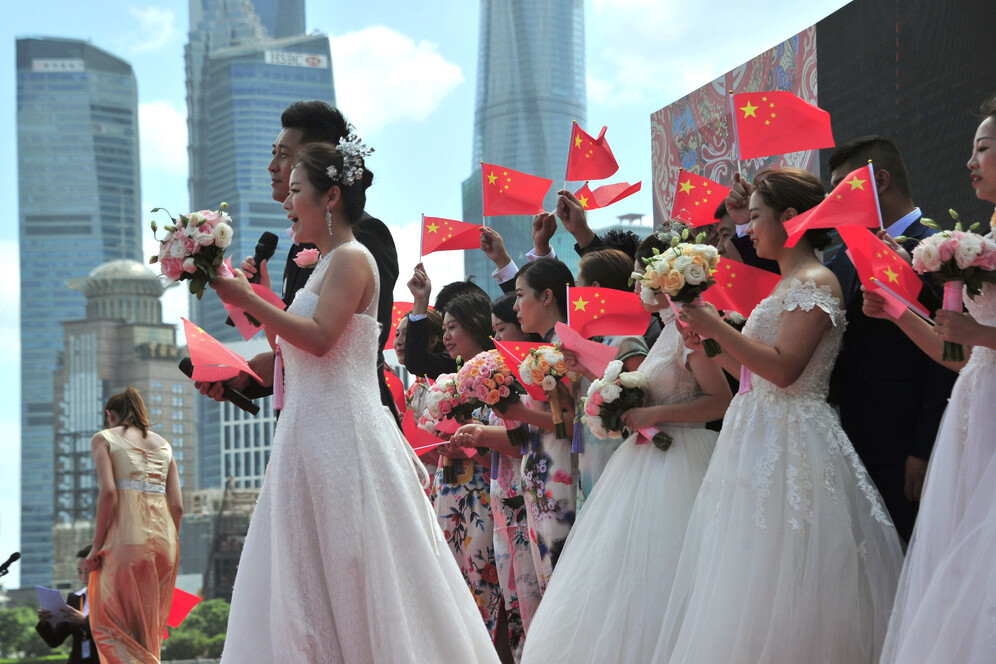 Couples holding Chinese flags sing as they attend a mass wedding on the Bund ahead of the 70th anniversary of People's Republic of China. REUTERS

Before the wedding ceremony, the groom is not required to give the bride engagement gifts while having a dowry. Such conditions are contrary to the age-old marriage customs. Even in modern Chinese society, the groom provides wedding gifts to the bride before the ceremony, and after that, the bride’s family offers a dowry. Without a dowry and wedding gifts, marriage is considered dishonourable.

Such an unusual union is impossible without two important conditions: firstly, to maintain constant communication, the families of the husband and wife must live close to each other — at least inside the jurisdiction of the same city. Secondly, it is assumed the parents of the newlyweds approve of the marriage because they are assigned an additional financial and emotional burden.

The most obvious is, of course, the money issue. The two-sided marriage costs a lot less for the future wife and the husband-to-be. The groom does not need to buy wedding rings and spend a fortune on the wedding ceremony, and the bride can hold on to the dowry, a must in the Chinese marital tradition. It is also customary to buy an apartment for the newlyweds in well-to-do families, although most often, the bride moves to the groom’s parents’ house for the first time, and then they rent a home. In a two-sided marriage, these expenses are also out of the question.

All the money saved goes to arranging children’s rooms and childbirth. And after the birth of two children, when the husband and wife leave for their parental homes, the parents actively help them with money and take care of their grandchildren. Thanks to this help, the newlyweds don’t need to worry about salaries and safely build their careers. 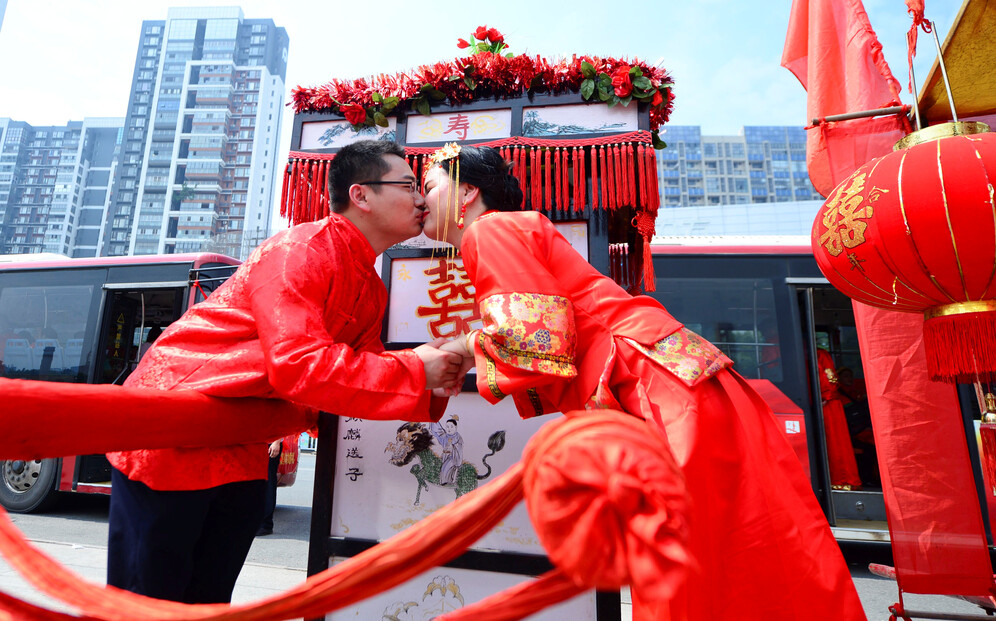 This familial strategy has psychological upsides, too. When the daughter moves in with her groom in traditional marriages, her parents are left alone and feel isolated. The separate marriage harmonises the husband, wife, and parents’ social roles in the family situation. Everyone gets their share of care and attention, while the woman has more time to fulfil her career opportunities as much as the man.

Thus, the spouses fully share all the responsibilities: earning money, raising children and caring for their parents, making this type of marriage more equal. Not to mention the symbolism of the last name in Chinese culture: if previously only the father could give his children his name, now the mother has the opportunity to do so as well.

Unsurprisingly, the new marital arrangement stirred up unhappy sentiments among advocates of traditional marriage. The immaturity of such a union is seen as the main downside of a separate marriage. Staying with their parents after the birth of their children, the newlyweds do not enter adulthood. The infantile nature of young parents, in turn, threatens the future of their children. It is much easier for a husband and wife to divorce in a separate marriage without becoming attached. According to the Ministry of Civil Administration, in 2019, 4.15 million divorce applications were filed in China, while only 9.47 million Chinese officially registered their marriage. The number of divorces in China is growing from year to year, and in the case of the popularisation of separate marriages, this trend is expected only to worsen. 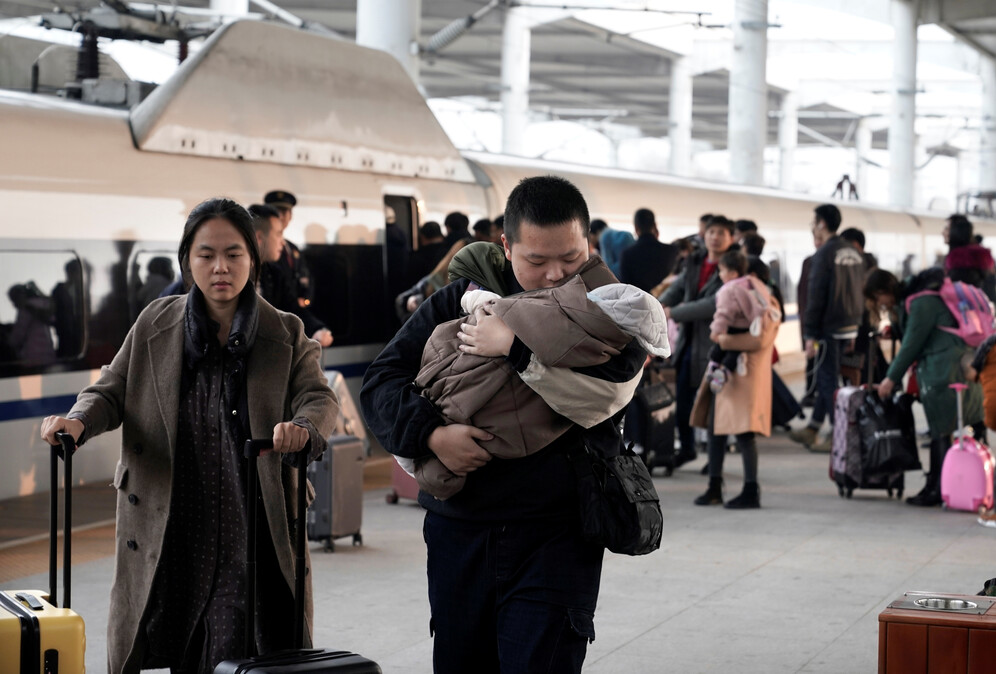 A family at a railway station during the annual Spring Festival travel rush ahead of the Chinese Lunar New Year. REUTERS by Jason Lee

Although a full-fledged wedding and separate housing require large and sometimes unjustified expense, such difficulties toughen a married couple. If a husband and wife pass these life tests, survive the hardships of taking care of a baby, they will grow up mentally and spiritually.

Also, the children’s emotional connection with the parent they don’t live with suffers a lot, often causing psychological trauma. There are concerns constant communication with grandparents may distance the children from the parents as well.

Aside from the practical convenience of separate marriage, its growth is due to critical socio-political and economic phenomena linked to the past and present of modern-day China.

Zhao Chun-Lan, a lecturer at Fudan University who specialises in the sociology of culture, has been researching separate marriages in China. She said such unions began to appear in 2011 when the Chinese Communist Party began to soften the one-child policy in the south of the country (birth control existed in the country from 1980 to 2016).

First, the one-child policy and the sharp increase in life expectancy have accelerated the population’s ageing.

Simultaneously, the birth rate in China is constantly decreasing, and officials are now calling on young families to have more children. These appeals are addressed to the generation of the 1980s and 1990s, who have a different view on the family than their parents. Almost all members of this generation were the only children in their families when living standards started to improve. Chinese parents, accustomed to surrounding their children with the utmost care, turned their kids into spoiled, demanding adults. 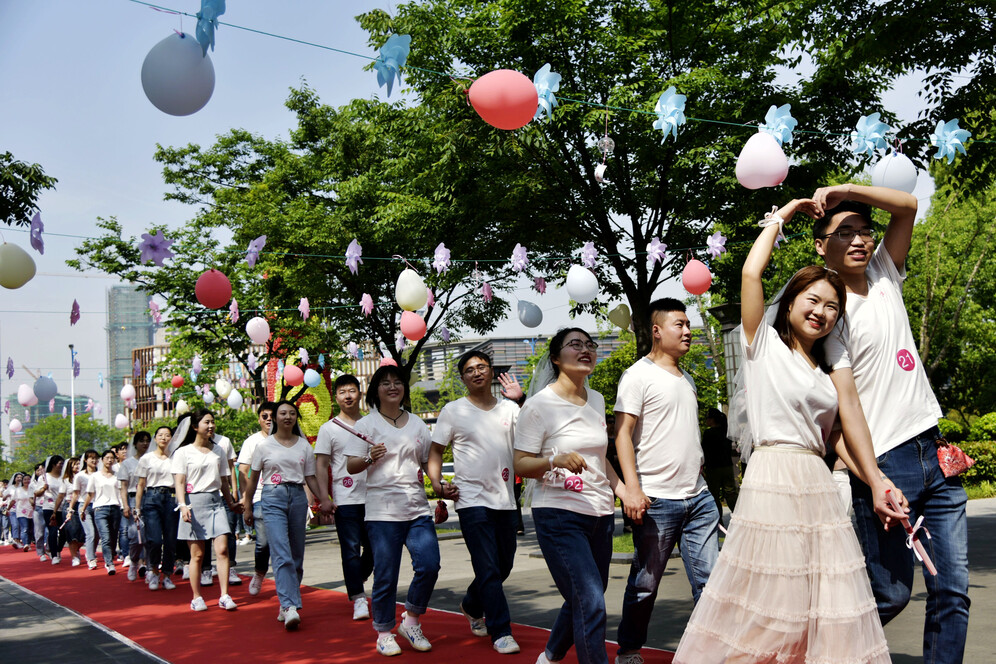 Couples attend a mass wedding ceremony in Rugao, Jiangsu province, China May 20, 2020. May 20 is a popular date for Chinese to register for marriage or hold wedding ceremony as the pronunciation of the number "520" is similar with that of "I Love You" in Chinese. China Daily via REUTERS

As a result, China was left with a whole generation of rather infantile and selfish young people, who stayed with their parents even after university and were heavily dependent on them financially and emotionally. They are reluctant to start a family, preferring to pursue careers or get an education.

Then the parents offer them a compromise — a separate marriage. They cannot radically change their lifestyle, as in a traditional marriage, but take certain steps towards independence inside the separate marriage.

Separate marriage is common in the east of China, in Huzhou and Zhejiang provinces, and Shanghai.

This is traditionally the richest region of China. From seventy to eighty percent of newlyweds living in the Water Village west of the city of Hangzhou, and 5 km from the famous Alibaba industrial park, are in a separate marriage. The whole point is that in the rural areas of eastern China, a special zone has formed where the past and the present collide — a developed clan system met economic growth.

Therefore, in these areas, when women want to get married, they not only try to find a person who can shoulder the family burden, such as child upbringing and taking care of elderly parents but also strive to find a way to keep their independence, keep their parental last names and protect their property from being taken by the male side through marriage. 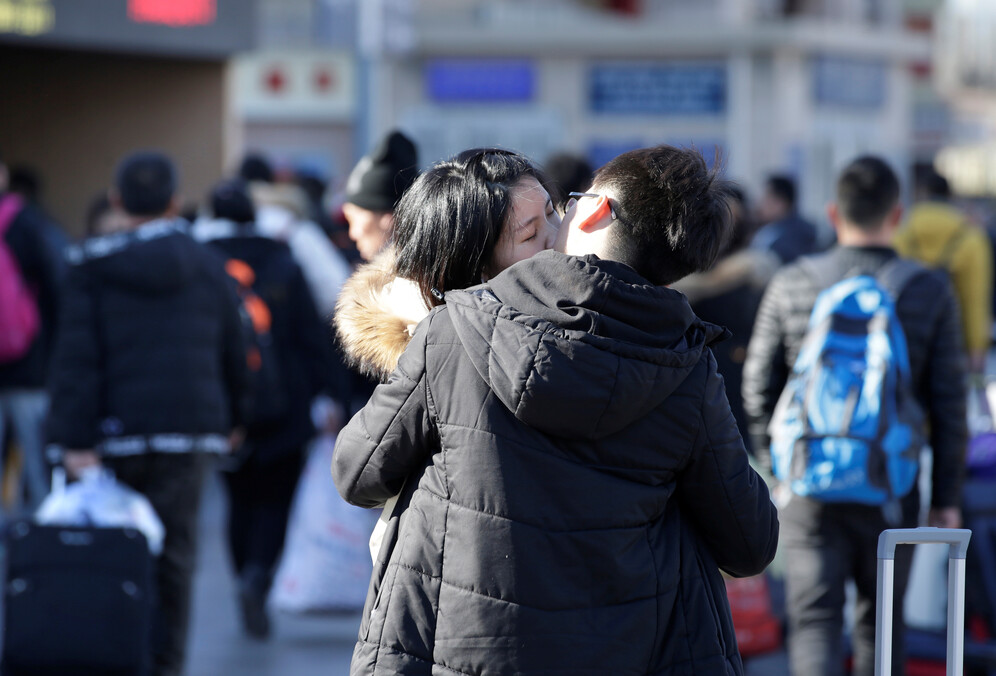 A couple kisses goodbye as the annual Spring Festival travel rush begins ahead of the Chinese Lunar New Year. REUTERS by Jason Lee

The east Chinese village population is usually represented by several large family clans, some of which trace their lineage back to ancient times. For such families, procreation even today remains one of the main goals in life, as the one-child policy has put a sizeable dent in it. Given the extinction of the village and the decline of the rural population — a worldwide trend that has not spared China — the clans are interested in young couples giving birth to children and returning from the cities to villages.

Dr Zhao Chunlan of Zhejiang International Studies University has conducted field research about “Liang tou hun” in villages in east China’s Zhejiang Province. He says the most essential and necessary condition for such a marriage is having two kids, so each family get one offspring to inherit the family’s property and continue the family line.

What is the future of this type of equal, modern marriage?

Mo Yan-Qing, a researcher at the Zhejiang Academy of Social Sciences, is convinced the results and consequences of these new unions will show themselves in a few years when spouses have to fulfil their part of the contract and take care of elderly parents. Luo Ruixue, an expert on feminism and gender equality, says the concept still has a positive side to social advancement.

“It is a move that breaks free from the marriage traditions that see men as the backbone of the family”.

Often, contracts between spouses in such marriages imply that at some point, they will fully become independent, buy their own house and, finally, move out from their parents. How they will learn to live independently, without parental help, together with two already grown-up children, and whether they will be able to become a full-fledged unit of society — only time will tell. However, this phenomenon has become one of the most discussed in Chinese social networks and media. 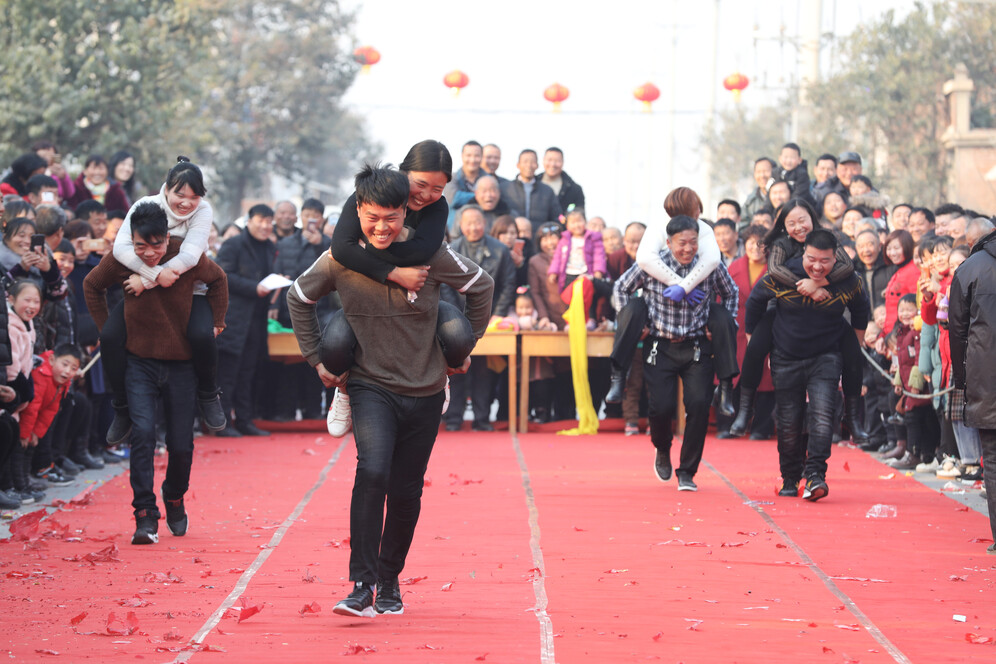 Couples take part in a running race as they celebrate the Chinese Lunar New Year. REUTERS

And given that neighbouring Japan and Korea as well as countries in Europe and the United States are experiencing similar problems with falling birth rates and ageing population, this new type of marriage may find fans around the world.