Cancellations, unemployment and obscure future: Hollywood in the time of Corona
Killology creator: “If you properly prepare yourself, killing is just not that big a deal.”

Not just another paedophilia scandal: Why German political parties experimented with vulnerable kids

Sven and Marco told RT about the abuse they suffered in Berlin at the hands of their foster father, a convicted paedophile. What makes this child abuse scandal different to others around the world is that paedophilia wasn’t a shameful side-effect, but the stated goal of their foster placement. RTD asks who was involved in this crime, and what on earth they were thinking.

“My thought was this can’t be true. I was not a mere product of chance. I was deliberately selected by the Berlin branch of the SPD party, the ruling party at the time, that hired a mercenary to destroy our lives in an experiment”, one of the victims told RT. Now grown men, Marco and Sven, not their real names, are beginning to piece together what happened to them when Berlin’s Department for Education Youth and Family placed them with Fritz H., a convicted paedophile, in 1989 for one and 1990 for the other.

Every kind of abuse

The boys were taken out of dangerous family situations. So initially, they were pleased to be living in a big apartment and spoilt by their foster dad. But then the abuse started. It included physical violence, threats, manipulation. “We were shielded from the outside world like a sect”, they recall. They weren’t allowed to talk to each other and weren’t taught to live independently. “He prevented us from getting an education because he would have lost his status as the caretaker. He lived on the money he received for nursing care. That was a lot of care money back then”, they explain.

Horrifically, they were subject to rape. Another sick and disabled foster child they looked after who had been neglected died of pneumonia in 2003.

They thought it was normal

For Marco, the sexual abuse stopped when he fought back, at age 17-18, he told Der Spiegel. He hadn’t thought to do that before, because he believed such treatment was routine.

“We realised our lives had not been normal when we left at the age of 21”; one of them explained to RT. “When I contacted other people and visited them, I got an idea of what family life could be like. It took a very long time to understand what had happened, why I became the way I did and couldn’t look at myself in the mirror.”

But three years ago, they found out they weren’t just the victims of a devious predator. “We read an article by Teresa and recognised Mr Kentler. Until then, it was all buried deep in our subconscious. We felt like a wreck without even being aware of it.”

Dr Teresa Nentwig is a political scientist at the University of Gottingen who for her doctoral thesis investigated Kentler, the academic behind the paedophile foster parent experiment in Berlin.

After being active in the state-supported Protestant church’s youth work department, and having studied a variety of subjects, he was awarded a doctorate in education by the University of Hannover for his thesis. This was, based on a book he’d published called Adults Learning Sex Education. Kentler had prepared the material with a group of parents, and the book was successful, selling 30,000 copies. It is still available on Amazon. 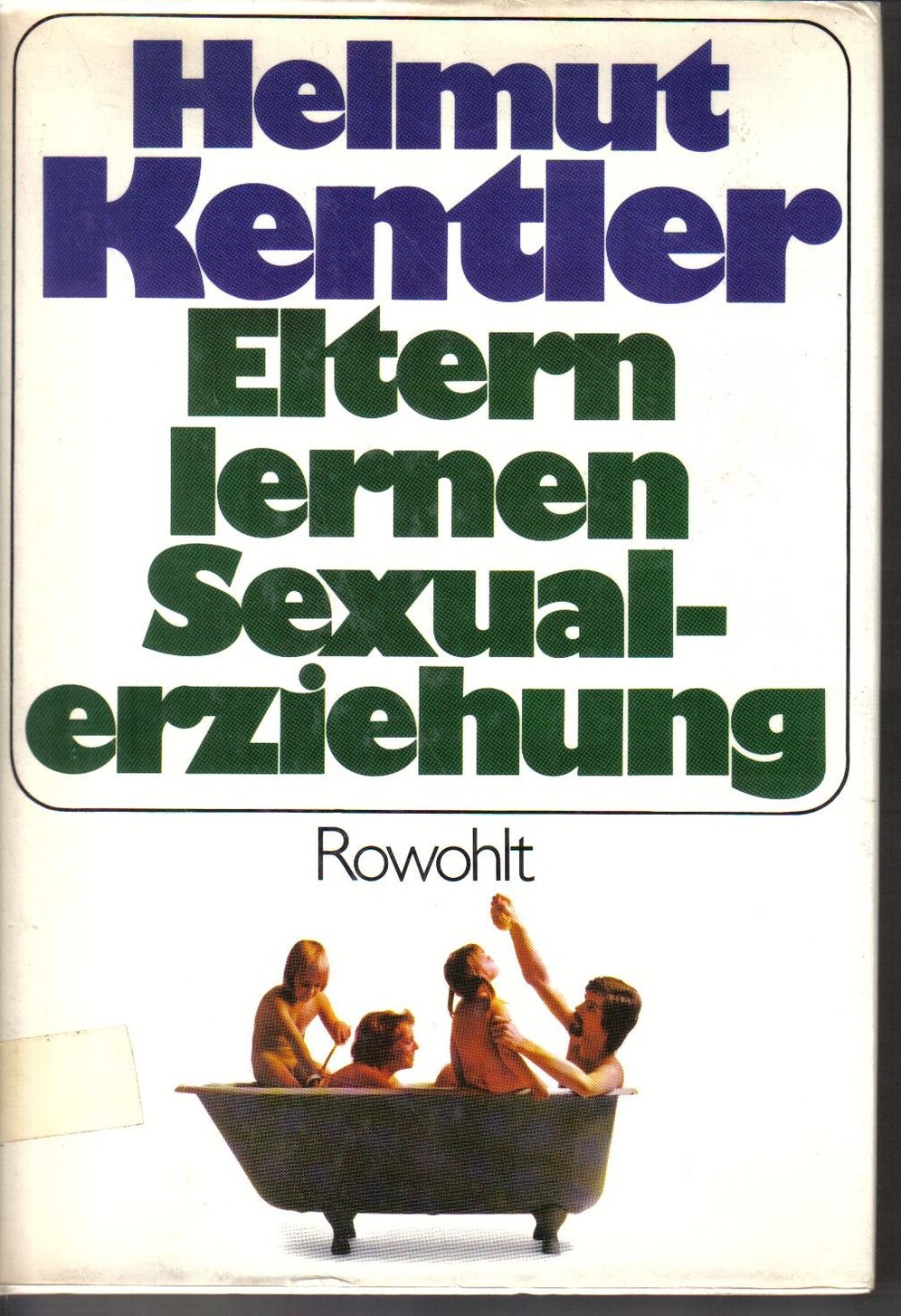 Helmut Kentler wrote a popular 1970s manual for parents who wanted to teach their children about sex.

However, according to Teresa Nentwig, the doctoral thesis did not meet research standards, and the Hannover University faculty had to bend the rules to award him a post of professor of education. He remained there until his retirement in 1996. Helmut Kentler was popular with the press and politicians, who often turned to him for expertise.

On a personal level, he outed himself as a gay man in the 1960s. He was active within the “Homosexuality and the Church” group of Germany’s Protestant Church. He adopted three sons and had one foster son.

In a 1995 lecture, he goes into details of giving naked massages to his foster son, Jens, with erotic results, as part of his bedtime ritual. “My method requires a lot of trust. It may only be used by men who, on the one hand, find the boy in question so likeable that they can be tender to him, but on the other hand are so disciplined that there are no sexual transgressions. That principle was especially true for Jens because he had already had negative sexual experiences with a man. It took him a long time to believe that I was not loving to him to get him to my bed.”

During the social revolution of the 1960s, the Berlin Senate, that is the government of the West German city-state, allowed experiments with child welfare services. In this context, Kentler, who had worked for years in Berlin and was thus well-connected, placed street children with paedophile foster fathers who took care of them “in return for sexual consideration”. Kentler argued the men would be motivated to invest in the boys because they were in love with their charges. He claimed such a bond would benefit the boys.

Since sex with minors under 14-years-old was illegal in the Federal Republic of Germany, he was careful to publish his findings after the statute of limitations had expired, ensuring he was free from prosecution. In 1980, the educator went public about this in an article entitled Paedophilia: Taboos and Pre-Taboos”, and also in Der Spiegel magazine.

As Sven and Marco’s case shows, and contra to the University of Hannover, the experiments did not stop there. Their case files revealed Kentler provided a glowing reference for Fritz H. when the latter fell under suspicion in the 1990s. The boys were still in his care in 2001. 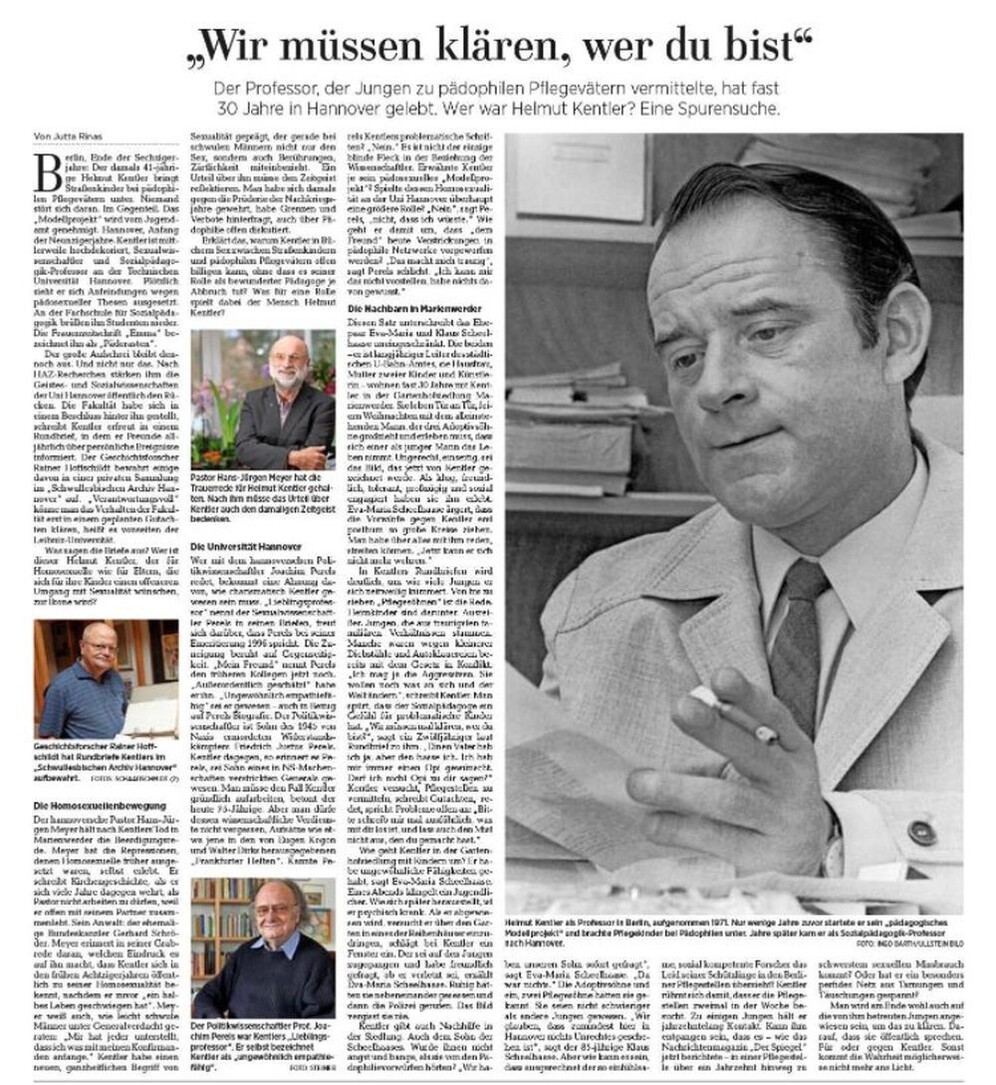 The perverted nature of education professor Helmut Kentler's ideas and practice is now coming to light in Germany.

The identities and number of vulnerable minors offered to paedophiles in Berlin is not known. Access to social services files is restricted by strict German laws protecting personal data. In addition, the Berlin Senate has offered words of sympathy to Sven and Marco and denounced the experiment, but the monetary compensation offered is only 10,000 euros. A pittance, given the emotional devastation they still live with. In other words, the institutions involved with Kentler, be it the Berlin Senate of the University of Hannover, are dragging their feet.

Why did Kentler get such a favourable reception in Berlin? Sven and Marco accuse the Social Democratic Party, which ruled the city in the 1970s and the 1990s. The conservative CDU was in power during much of the 1980s.

What is known is that paedophilia as a valid sexual expression was being promoted within some allied political parties, namely the Greens and the liberal Free Democratic Party.

Kentler himself, as part of his politics, spoke at an FDP parliamentary group on the repeal of paragraph 175 of the Criminal Code, criminalising homosexuality. He discussed his “experiment” openly.

In the minutes of the meeting, Kentler is quoted as follows: "Some time ago I reported on a completely different experiment in Berlin that I was involved in starting around 1970. At that time, I worked with former welfare students who suffered from secondary mental retardation. (…) They were between 13 and 15 years old. Most could not read and write; most could not read the time. We managed to place Some of these boys with paederasts (that is, men who have sex with pubescent boys). These were mostly very simply structured people, especially caretakers (…).

These people were able to put up with these retarded boys only because they were in love with them, infatuated with them, crazy about them. We looked into these relationships very intensively and supervised them. In all cases, these boys are now able to make a living independently, and - again by the way - not a single one of them has become gay.” According to Der Spiegel, no one raised any objections.

That year, the FDP organised a party at the close of its convention to which “Lesbians and Liberals, Gossips and Sisters, Celebrities and Paederasts.” were welcome. “The FDP also obtained government funding for the General Homosexual Working Group (AHA). At the time, AHA didn’t just advocate the urgently needed decriminalisation of homosexuality -- it was also a lobbying group for paedophiles. This meant taxpayers’ money went to an organisation whose “Working Group on Paedophilia” called for a reform of Germany’s sex crime legislation, offered support to paedophiles facing trial and published corresponding views on these subjects in the country’s newspapers”, denounces the German magazine.

…and the Greens denounced age-of-consent laws

Similar views were also prevalent within the Green Party. The party funded a Federal Working Group for Gays, Transexuals and Paederasts, BAGSchwuP. “At the federal political level, the Greens were the only hope for paedophiles” Spiegel quotes a BAGSchuP member, Kurte Hartmann. “They were the only party that was ready to stick their head over the parapet for sexual minorities”.

In 1980, the Federal Party adopted this resolution as part of its programme: -“Sections 174 and 176 of the Criminal Code are to be drafted in such a way that only the use or threat of violence or abuse of a relationship of dependency in sexual acts are to be punished.”

At the state level in North-Rhine Westphalia, the Greens approved this text by 76 to 53. The motion submitted by SchwuP was adopted: “Consensual sexuality is a form of communication between people of all ages, genders, religions or races and to be protected from every restriction [...] Non-violent sexuality must be free for everyone.” “Non-violent sexuality” should “never be subject to criminal prosecution”. Therefore, “all criminal offences that threaten non-violent sexuality with punishment” should be abolished. 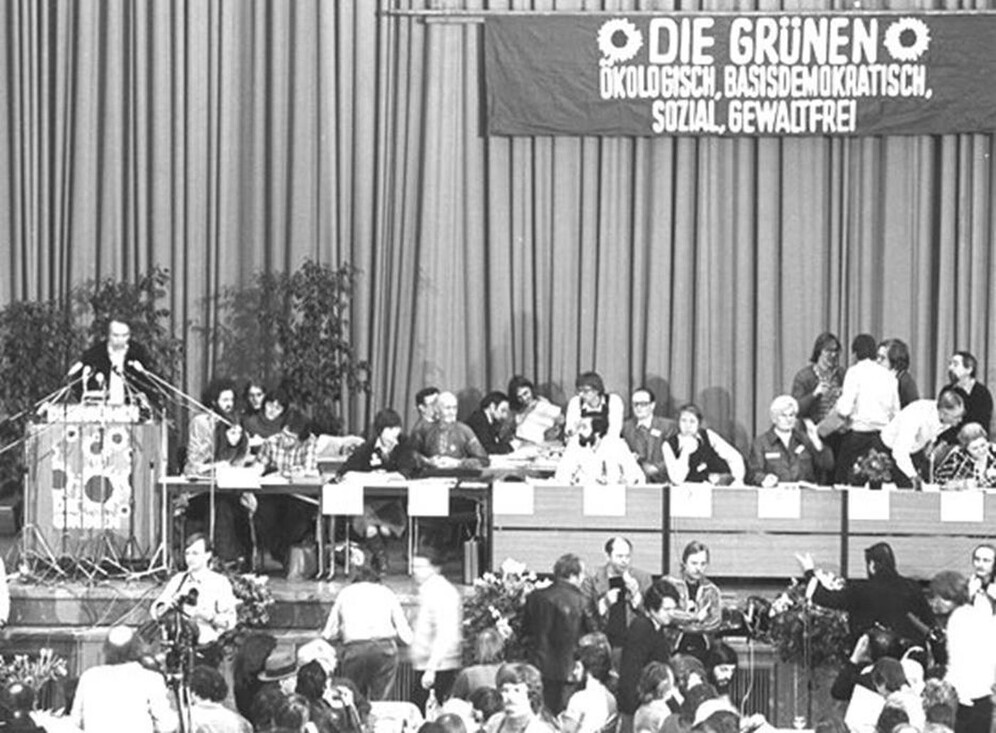 The Green party in West Germany was born from the coming together of various protest groups in 1980. Some of these groups had very questionable goals.

The sexual revolution that ate its young

Fifty years on from the sexual revolution Cohn-Bendit did so much to unleash, this quote and others by him are no longer fashionable. To defend himself from the backlash against his unfortunate choice of words, he explained they should be taken as a “kind of manifesto against bourgeois society”.

In their rush to bring down taboos and restrictions on who could have sex with whom, and to replace an elaborate centuries-old code of behaviour with the single concept of consent, some sexual revolutionaries seem to have been blind to the damage a sexual free-for-all could do to those most in need of society’s protection. Now the victims are making their voices heard, and the new morality doesn’t seem so black-and-white anymore.