Anneliese Michel: How a girl believed to be possessed underwent 67 exorcisms
From Ruby Ridge to BLM: How has the anti-gov movement evolved?

China’s #metoo: Refusal to be silent

On a warm June day two years ago, 19-year-old Li Yiyi sat on the edge of the roof of a department store in Qingyang, staring intently at her phone. It was if she was waiting for a message to pop up and magically fix everything that was wrong with her life. As the police attempted to prevent a tragedy, some deranged onlookers were booing and urging her to jump. And eventually, the girl did jump to her death. The teenager’s life started to unravel two years before, when prosecutors cleared a high school teacher whom she had accused of attempting to rape her in September 2016. As with many other Chinese women, Li was unable to get legal help for the sexual abuse case. It was her fifth attempt to take her life, and, sadly, it succeeded.

“The thing my daughter could not let go was the person was only lightly punished. The school didn’t admit even they did wrong… They think she made too big of a deal out of a small matter,” Li’s father told The Beijing News.

Until recently, there was no legal definition of sexual harassment in China and no national regulations on how to handle sexual assault cases.

In May 2020 a session of the National People’s Congress approved a new civil code that features Article 1,010, which says a person may be held liable “for speech, words, images or bodily actions that have been used to carry out sexual harassment against a person’s wishes.”

It also holds schools, businesses and other organisations responsible for preventing and dealing with sexual harassment. Before this, victims of abuse would have to sue their assailants, however rarely, by filing cases under other categories, such as, for example, “personality rights”. Translating a trial into a labour dispute was the only way since sexual harassment was not recognised as a legal cause of action. 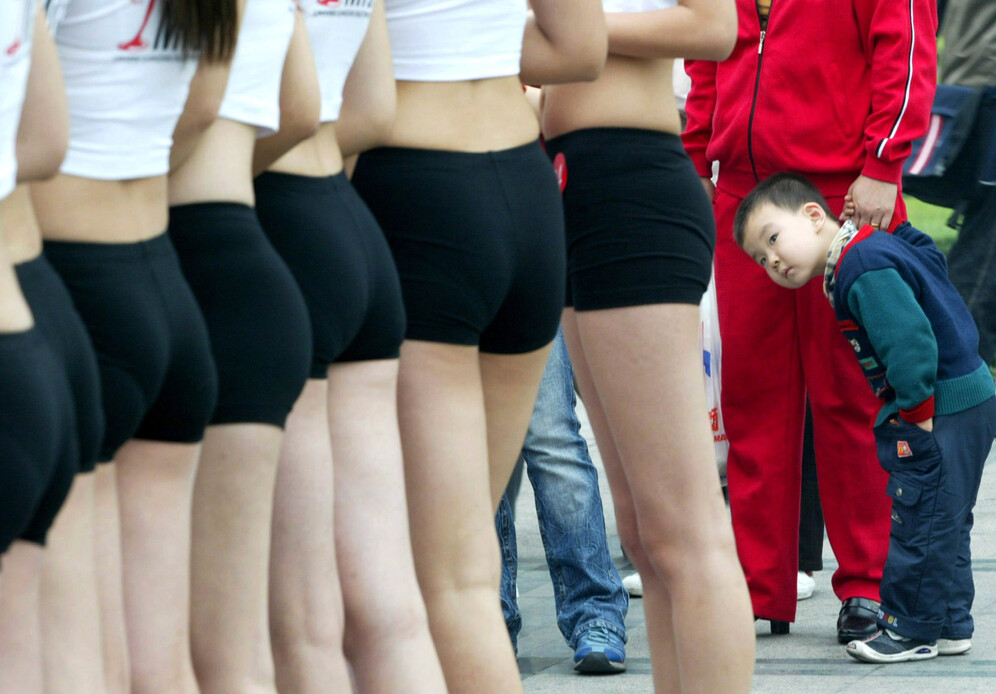 A Chinese child looks down a line of women competing in a beauty contest in China's southern city of Guangzhou. Beauty pageants are becoming popular in communist China, although they are banned from broadcast on state-run television./REUTERS/China Photos WC/FA

This is what 27-year old Zhou Xiaoxuan did when she filed a lawsuit against the famous Chinese TV host Zhu Jun in 2018. She accused him of groping and forcibly kissing her in 2014, while she worked as his intern. When the new law was introduced, her lawyers asked for her case to be considered. After two year’s delay, China’s most highly publicised sexual harassment case was finally heard by a Beijing court. Although the defendant failed to appear in court on December 2 and the hearing was postponed, Zhou’s supporters view the fact the case made it to court as a victory in itself.

In China, sexual assault or harassment cases are taken to court very rarely — also because the accuser can quickly become the accused.

As it often happens, Zhu Jun was quick to file a defamation lawsuit against Zhou and her friend, Xu Chao, who had reposted her account online. He demanded an apology online and in a national paper, and about $100,000 compensation, plus his legal fees, but lost his case.

Zhou, who commonly goes by the nickname Xianzi, went public with her story in 2018. On July 26, she posted on the WeChat messaging board, saying “I was once numb to things like this, but in the past year, the feminist movement started little fires all over the place, giving me guidance. By tonight, I’ve seen so many women coming out about what they went through. I think it’s time for me to record mine. To tell you something about the world we live in.” 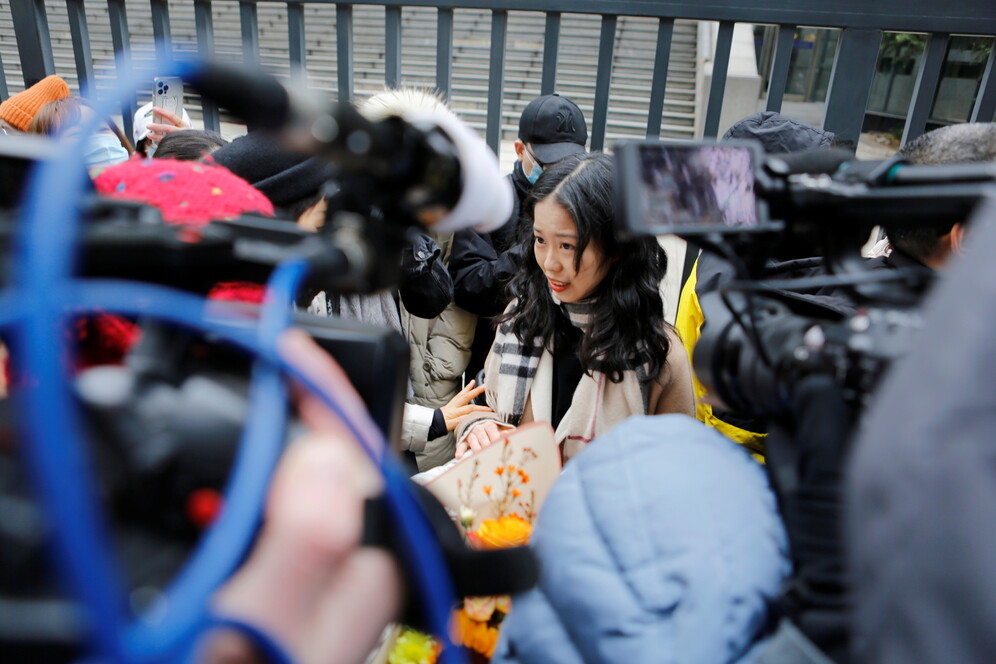 Zhou Xiaoxuan, also known by her online name Xianzi, speaks outside a court as she arrives for a sexual harassment case involving a Chinese state TV host, in Beijing./REUTERS by Florence Lo

Xianzi may not have been the first woman to come forward publicly, but her story resonated with a significant number of Chinese women who’d been victims of sexual assault in schools and workplaces. Sexual harassment is rampant in China. An online survey of 6,500 university students in 2017 indicated that 70% of respondents had been sexually harassed, while an earlier survey conducted by Sina.com together with “For Him” magazine reported 66 percent of men and 80 percent of women had experienced sexual harassment. The figures are not necessarily representative of the general situation, but the scale of the problem is apparent.

Back in 2018, when Xianzi posted her story, it got shared over 10,000 times but eventually was taken down by censors with all subsequent mentions of it banned in the media.

The government couldn’t silence the paradigm shift emerging on the shoulders of the global #MeToo movement.

In 2017 the global #MeToo campaign against sexual harassment took off after two dozen women came forward with allegations of sexual harassment and assault by Hollywood producer Harvey Weinstein. Xianzi’s case wasn’t the first of its kind in China. In 2018 professor Chen Xiaowu of Beihang University was accused by his former student Luo Xixi who exposed Chen’s longstanding predatory behaviour. In her essay, she wrote she was inspired by both the #metoo movement and anonymous social media posts written by Chen’s other victims. Her post on Weibo got more than three million views in one day and triggered a heated online debate. Chen was later removed as vice president of the university’s graduate school and had his teaching credentials revoked for violating the school’s code of conduct. However, no legal proceedings took place. 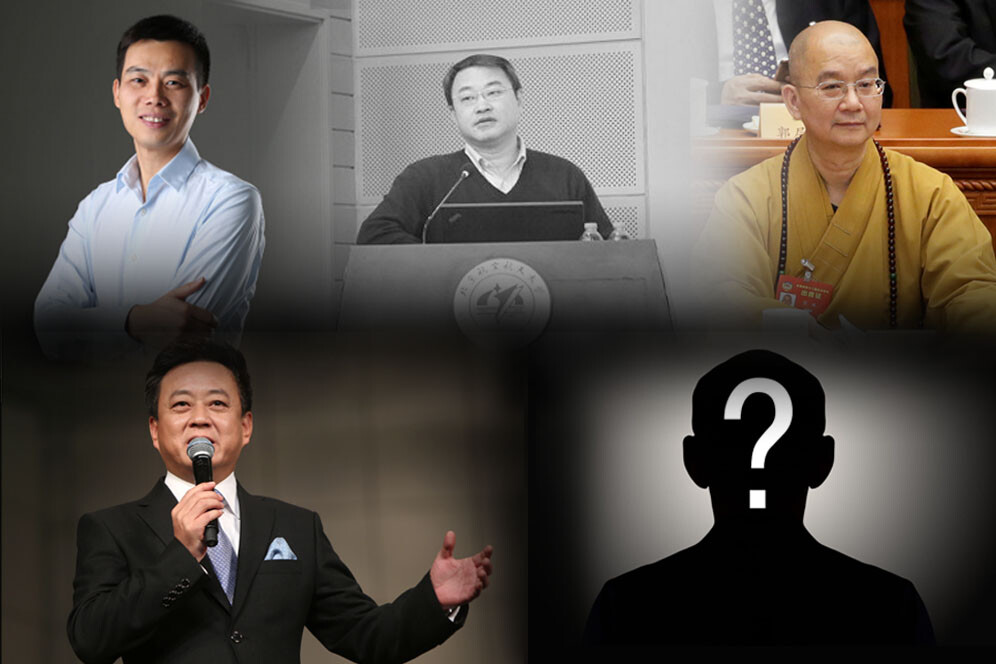 Xiaomi's vice president Wang Lingming, Professor Chen Xiaowu of Beihang University, the abbot of Beijing’s Longquan Temple, and Chinese TV host Zhu Jun were accused of sexual harrassment, but there might be more.

The movement spread further across the country as women spoke of having fallen victims of sexual misconduct: for example, two well-known badminton coaches were accused of sexual abuse by a 17-year-old female athlete, the abbot of Beijing’s Longquan Temple was removed from his post amid allegations of sexual assault, and Lei Chuang, a founder of a major charity, had to step down after rape accusations. And most recently Chinese smartphone manufacturer Xiaomi fired its vice president, Wang Lingming over sexual misconduct in the workplace.

Being vocal about one’s experiences of sexual abuse in China is not as common — or safe — as it is in the West. A hashtag campaign like #MeToo in a country with no internet freedom is problematic at best.

Thousands of websites and apps, including the ones like Facebook, Twitter, Instagram, WhatsApp, and Google, are blocked in China. Chinese resources performing similar functions, like the local social network Sina Weibo, or the hugely popular mobile communication network WeChat, are subject to government scrutiny and censorship. The original English hashtag #MeToo lasted only a short while on the Chinese internet before censors blocked it. All related content is routinely cleansed from social media platforms.

Activists came up with imaginative ways to get around the ban, using the hashtag “rice bunny,” pronounced “mi tu” in Mandarin, or by using the bowl of rice and a rabbit face emoji combination.

This hashtag was later compromised as well, and replaced by “woyeshi,” the Chinese for “I am too”. Activists try to use encrypted messaging apps and share screenshots instead of texts that aren’t as easily intercepted. In the most recent iteration of #MeToo movement, Weibo users introduced #NotYourPerfectVictim hashtag meant to push against the victim-blaming culture, still prevailing in the patriarchal society. After drawing over 17 million mentions, the tag was quickly censored on Weibo. 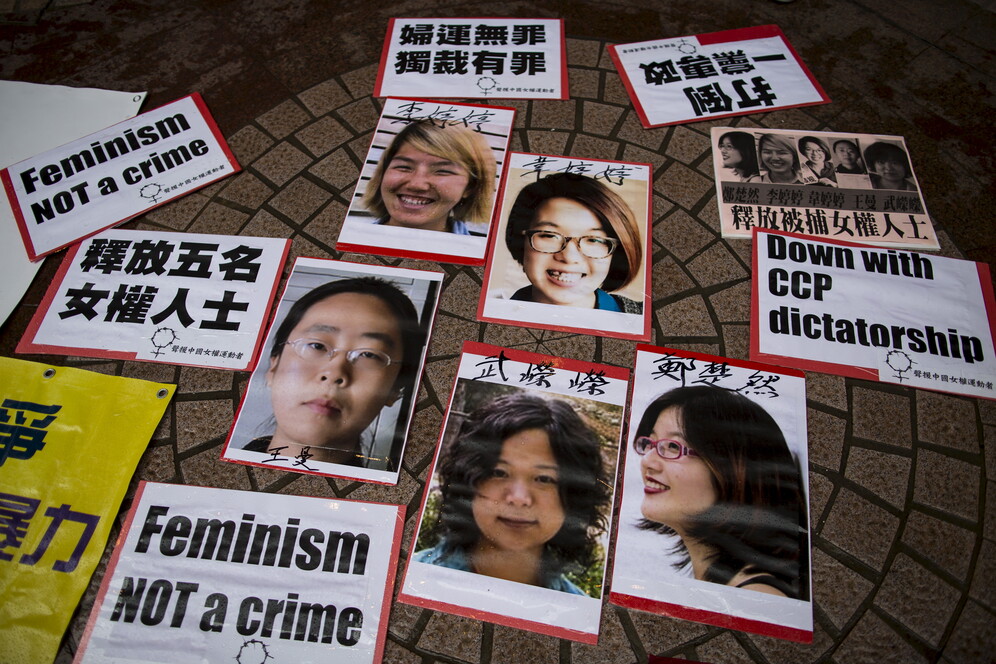 China’s intolerance for activism has considerably slowed the #MeToo movement. Women are still reluctant to come forward, and it is rare for cases of sexual harassment to make it to court. In the country where attempts to make one’s voice heard are often qualified as “picking quarrels and provoking troubles” and can get you arrested, very few women come forward with allegations. The recent crackdown on activism in China has affected the feminist movement as well: in March of 2018, the social media accounts of Feminist Voices, one of China’s leading feminist organisations, were suspended from Weibo and WeChat.

In 2015, Chinese authorities detained five feminists on suspicion of them planning to hand out flyers against sexual harassment on International Women’s Day. Thirty-seven days later women were released, but the grassroots activism took a hard blow.

Despite official resistance and censorship, China’s nascent #MeToo movement has caused a significant stir in society. And even though very few perpetrators accused of sexual misconduct face consequences, victims get much more support for their bravery. Judging from the videos recorded outside the Haidian People’s Court in Beijing on the day Zhou’s case was heard, there were dozens of supporters with banners featuring the slogan “Together we demand answers from history”. 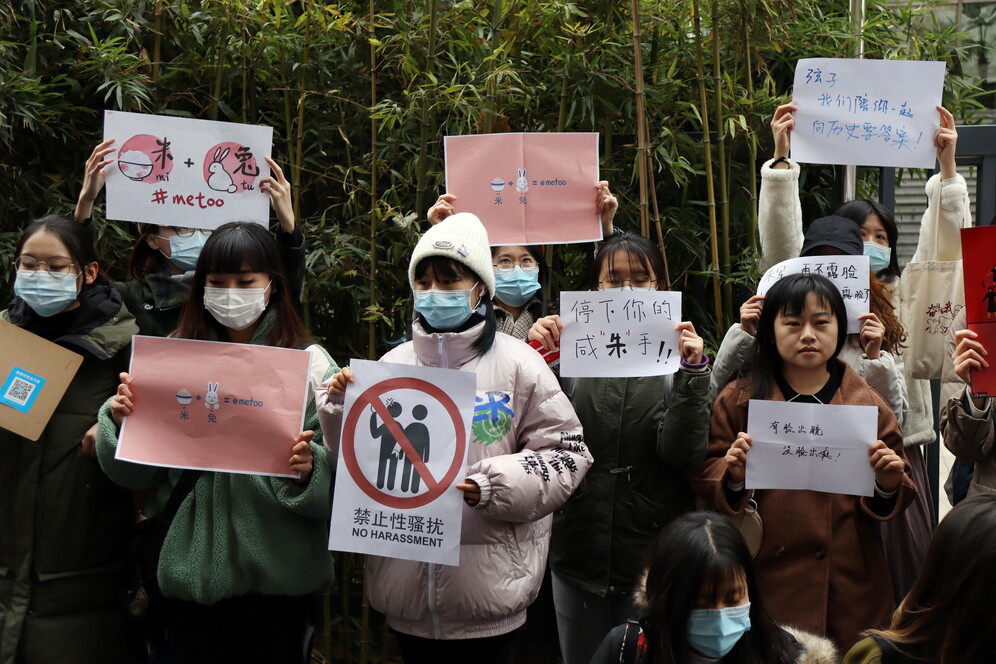 Supporters hold #MeToo and other signs outside a court before Zhou Xiaoxuan arrives for a sexual harassment case involving a Chinese state TV host./REUTERS by Florence Lo

And indeed, one of the earliest sexual harassment scandals that erupted in China over 20 years ago drew renewed anger after recently surfacing on social media. In 1998 a 21-year-old student, Gao Yan, was allegedly raped by a professor Shen Yang at prestigious Peking University. He denied the allegation and kept his job with nary an administrative punishment. The young woman committed suicide — just like Li Yiyi did — unable to face indifference and social stigma. But when the case has recently become the centre of public attention after millions of people shared Gao’s story online, the professor’s two current employers, Shanghai Normal University and Nanjing University, finally sacked him. Twenty years is a long time for justice to prevail, but, as Xianzi said on her way to court in Beijing: “History repeats itself, but history moves forward.”