From Ruby Ridge to BLM: How has the anti-gov movement evolved?
Real-life magician: The student of a legendary Soviet hypnotist Wolf Messing talks about predicting the future and curing illnesses

A prison, a bullet, and flying workers: how Moscow State University was built

The Building of Moscow State University (MSU), one of Stalin’s majestic “Seven Sisters” was one of the greatest projects of post-war Soviet Russia. Thousands of workers, conspiracies and a unique “high-altitude penitentiary”— all of which contributed to the building of the decade.

In 1948, employees of the Science Department at the Central Committee of the Communist Party received a task from the Kremlin. They were to draft a plan to construct a new building to house the Moscow State University. Together with the head of the University at the time, Academician A. Nesmeyanov, they prepared a report — suggesting building a highrise version of the “Temple of Soviet Science”. However, the project was deemed unrealistic by the Moscow Communist Party. The building had to be no higher than four floors, while a highrise needed too many elevators. 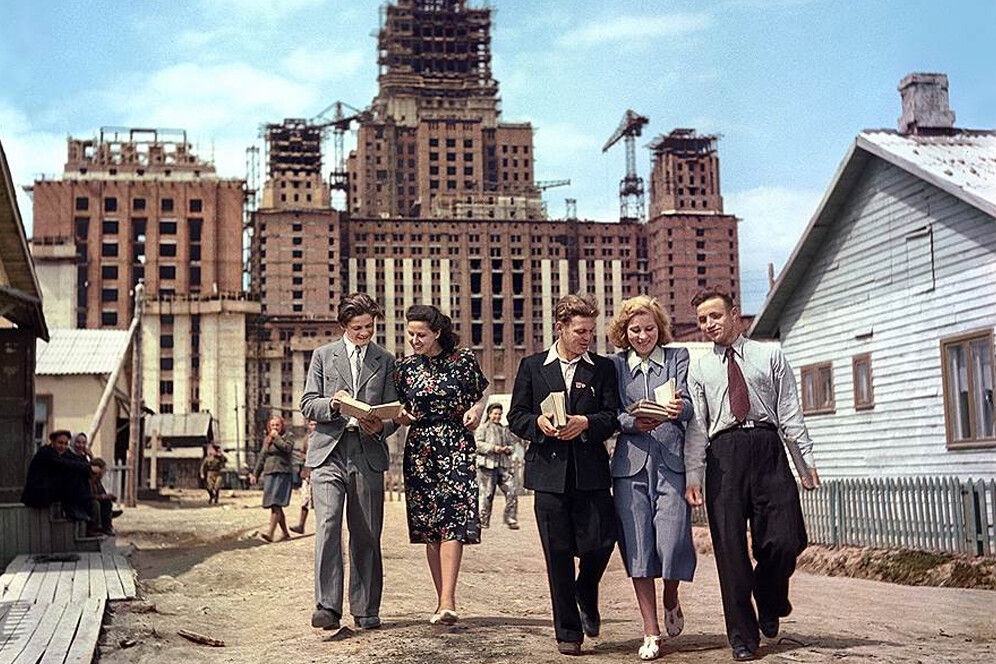 Komsomol youth after working their shifts as facers on the MSU buidling site, 1951./Photo by Semyon Fridland and Evgeny Umnov via pastvu.com

A few days later, Stalin held a special meeting concerning the “University issue” and concluded the new 20-storey building for the University had to be erected on top of the Lenin Hills in Moscow. Stalin even suggested each student should have a separate room, which meant a total of 6,000 dorm rooms. He was convinced that since students are a very social crowd, they’d be bored confined to their own cell. So the number of rooms was reduced to only 3,000. 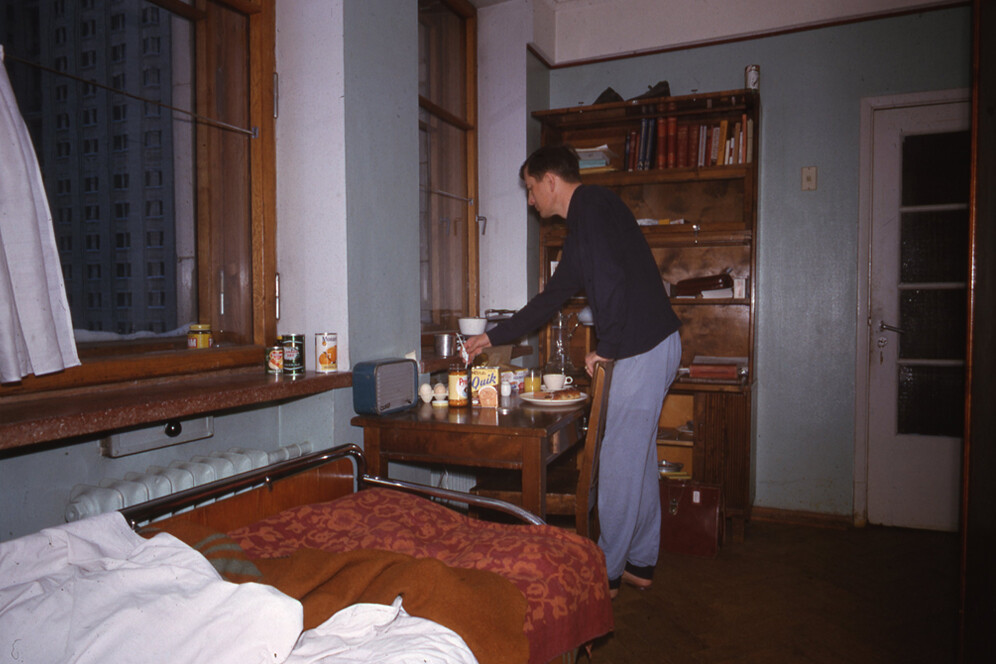 Building skyscrapers was a huge step forward in the industrialisation of the construction industry. Moscow highrises became a testing ground for technology in the USSR and laid the groundwork for modern design and construction. Highrise buildings were literally very high-maintenance, and they demanded technological advances. As a result, the construction of highrises was beneficial economically as its influence went far beyond just building houses.

The project of the new University building was prepared by renowned Soviet architect Boris Iofan, who also designed the humongous but never realised Palace of Soviets skyscraper. However, a few days before the approval of the blueprints, the architect was suspended from the task. The creation of the most grandiose of Stalin’s skyscrapers was handed over to a group of architects headed by L. Rudnev. 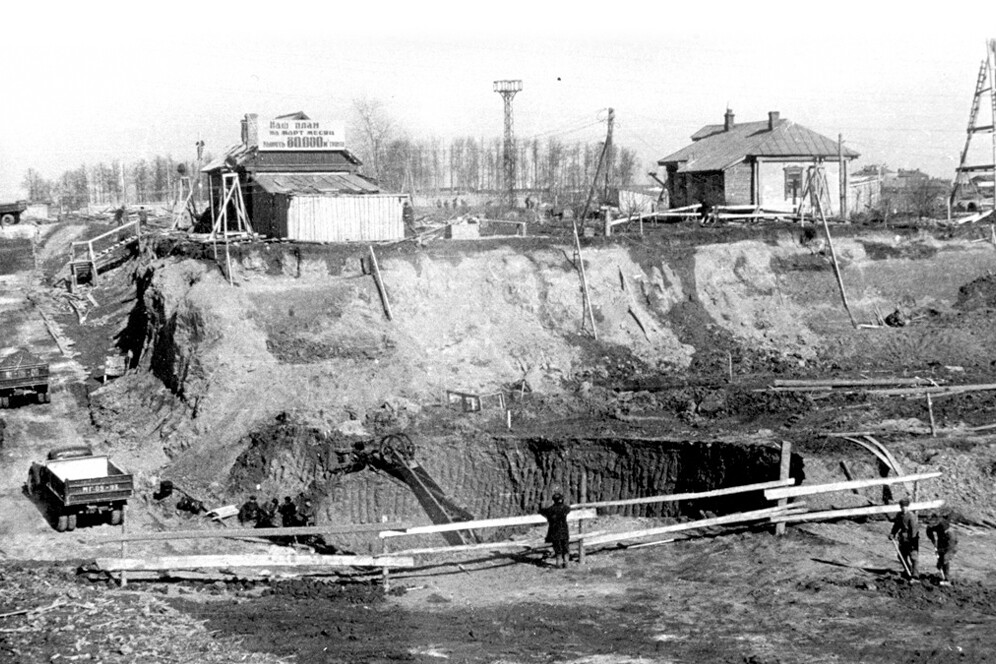 The reason for such an unexpected replacement is considered to be Iofan’s obstinacy. He was going to build the main building right above the Lenin Hills cliff, which was in tune with Stalin’s vision. But by the fall of 1948, having done tests and calculations, scientists were able to convince the Soviet leader the location of a structure that big would result in a disaster. The new University would simply slide into the river! Stalin agreed with the need to move the main Moscow State University building away from the edge of the Lenin Hills, but this was not an option for Iofan. And being contradicted was not an option for Stalin. Lev Rudnev moved the building 800 metres away from the cliff and created an observation deck on the site chosen by Iofan.

In the initial draft, the highrise was to have a sculpture of impressive size on top. The man with his arms spread wide was supposed to symbolise the thirst for knowledge. Although the architects gave a hint to Stalin that the statue would bear a resemblance to him, the leader refused: he wanted all the "Sisters" to look alike.

The groundbreaking ceremony of the Moscow State University building took place on April 12, 1949.

Reports from the construction on Lenin Hills said 3,000 young Komsomol members were involved in the process. However, in reality, many more people had jobs here. The Ministry of Internal Affairs issued a special decree in 1948, granting a conditional release for several thousand convicts with engineering degrees to be transported to the University construction site. These people got to do the rest of their time building MSU. However, after giving this initiative a serious consideration, the convicts were only employed in the initial stages of construction, and once it was done, the programme was closed. 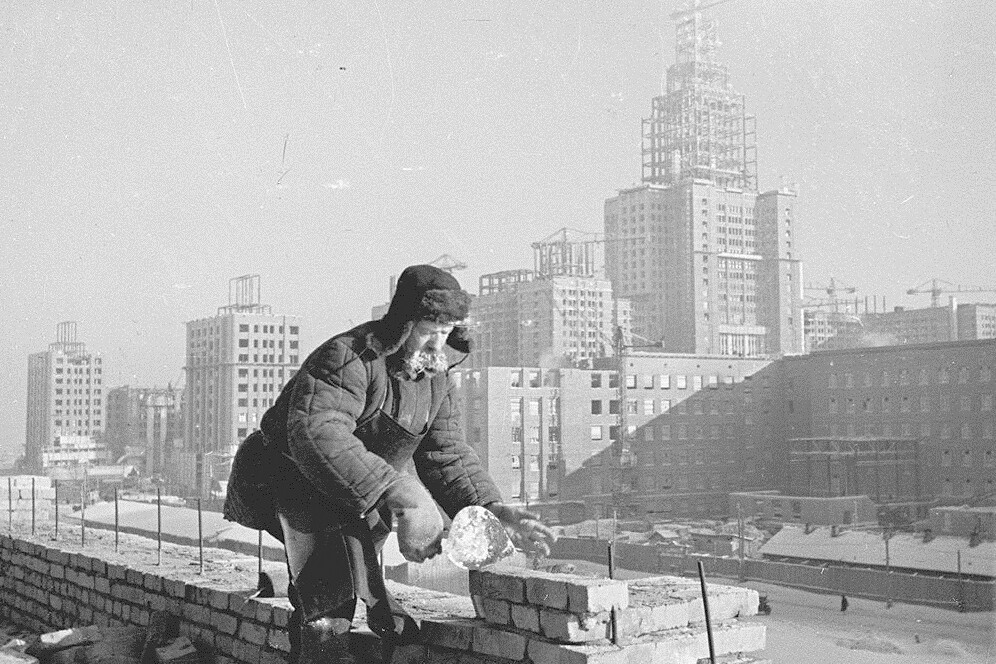 When the construction of the highrise came to an end, it was decided to “bring convict homes closer to their workplace”. A mobile “penitentiary” was set up on the 24th and 25th floors. This solution also made it possible to save on security: there was no need for guards or barbed wire — there was nowhere to go!

As it turned out, the guards underestimated their wards. In 1952, a craftsman among the prisoners managed to build a glider out of plywood and wire. Legend has it different ways. According to one version, he flew over to the other side of the Moscow River and disappeared. According to another – he was shot by security guards while still in the air. There is a third option with a happy ending. Allegedly, the Soviet Icarus was detained by the NKVD the moment he hit the ground. However, when Stalin heard about his reckless feat, he released the brave inventor. 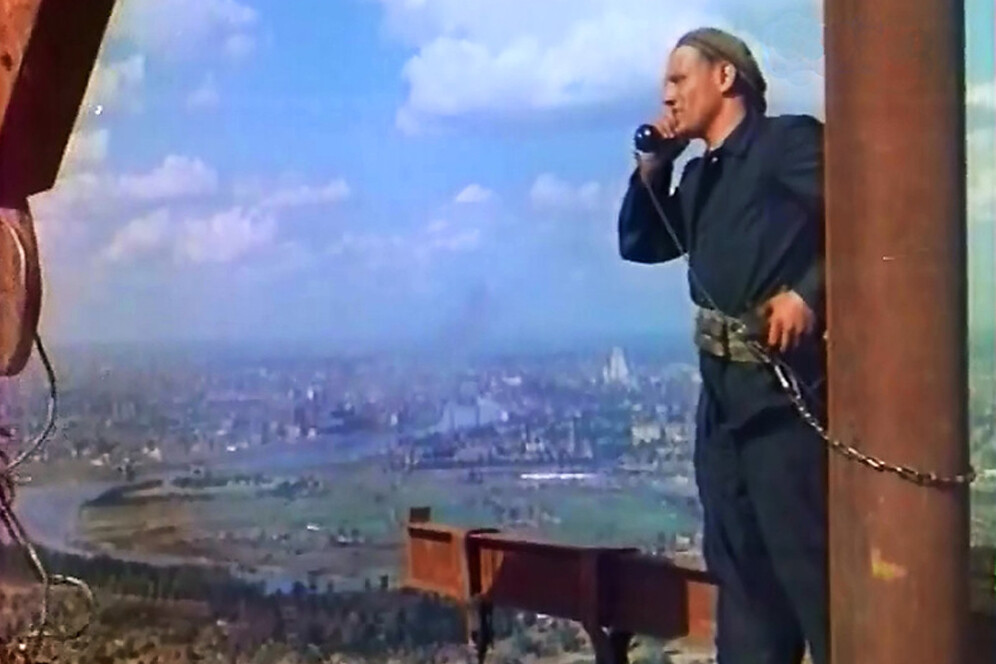 Ivan Kleschev, a high rigger, is calling for a hoist on top of the university tower./Photo via letopis.msu.ru

Another unusual story is connected with the unique “high-altitude penitentiary”. This incident is considered an assassination attempt on Stalin. One day, vigilant security was checking the premises of Stalin’s country house, located to the west of the University construction site, and suddenly found a rifle bullet on the path. Who fired the shot? When? The ballistics examination found that the bullet had been fired from the University. In the course of further investigation, the mystery unravelled. As the guards were changing at the highrise prison, one of them accidentally pulled the trigger of his rifle. The shot fired towards Stalin’s residence.

The main building of the MSU immediately broke many records. The 36-floor highrise is 236 metres tall. The steel frame of the building required 40,000 tons of steel. And it took almost 175 million bricks to build the walls and parapets. The spire that Stalin loved so much is about 50 metres high, and the star that crowns it weighs 12 tons. 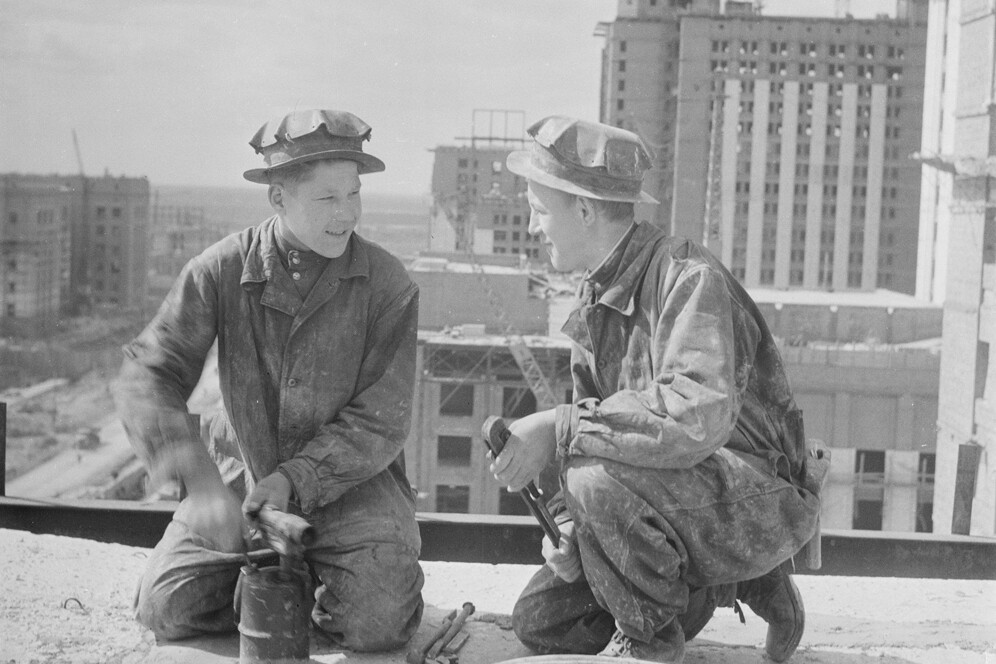 One of the side towers has a champion clock, the largest in Moscow. The dials are made of stainless steel and are 9 metres in diameter. The hands of the clock are also very impressive. The minute hand, for example, is twice as long as the minute hand of the Kremlin chimes. It’s 4.1 metres long and weighs 39 kilograms.

A unique elevator was also created in the skyscraper. The building has a total of 111 elevators of a particular design, including high-speed highrise cabins.

It’s likely the main building of the University is also a record holder for the number of columns. It’s almost impossible to calculate the amount. Some of the columns are solely for decoration and do not bear any structural load. 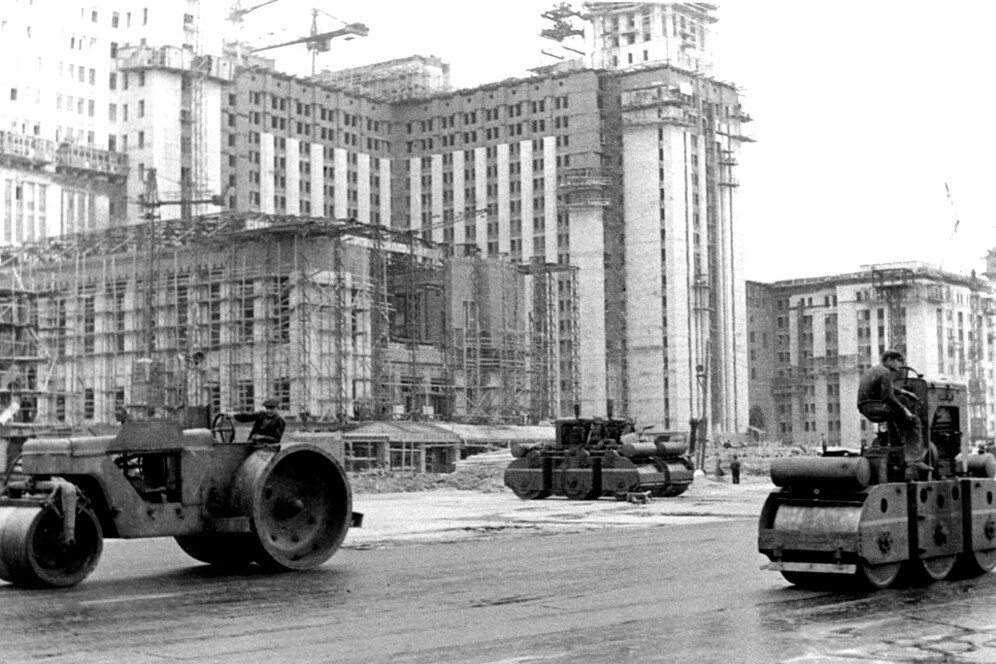 insert The purpose of many Moscow highrises, as well as their size, changed in the course of their construction. The same happened to Moscow State University. A 1948 issue of the “Soviet Art” newspaper says the building on Lenin Hills was supposed to be a hotel with private apartment blocks. University building in 1953./Photo via letopis.msu.ru

Joseph Stalin did not live to see his much-coveted project come to life — he died seven months before the highrise “Temple of Science” opened its doors to students on September 1, 1953. If Stalin had lived a little longer, Moscow State University would have had his name instead of Lomonosov’s. Plans for a name change were already in place, but the leader was gone, and the idea remained on paper.