Is Being Gay Becoming Sexier Than Being Straight?
How to detect fake news: do it yourself or let Artificial Intelligence help you out

Take a knee with me: The symbolic gesture that’s torn America apart

As dozens of American cities were swarmed with protests following the killing of George Floyd by a Minneapolis police officer, we witnessed an unusual yet very loaded gesture that became one of the symbols of the surge in the #blm movement. We’re talking knee bending as a way to demonstrate solidarity with the cause. Although activists standing on one knee aren’t exclusive to American streets — some rally-goers in Europe adopted this pose of protest, too — many questions arose as to where it came from and how this gesture fits in the modern context.

For those who haven’t been following American politics too closely, protesters on one knee had a vague resemblance with characters of medieval sagas or Hollywood movies. UK Foreign Secretary Dominic Raab, for example, suggested it “seems to be taken from Game Of Thrones”. He also said he would not take a knee in support of the Black Lives Matter movement, because “It feels to me like a symbol of subjugation and subordination, rather than one of liberation and emancipation — but I understand people feel differently about it, so it is a matter of personal choice.”

Dominic Raab - who I really must stress is the actual foreign secretary - thinks taking the knee is from game of thrones. pic.twitter.com/Xl3g5Me0JP

After facing harsh criticism and a good deal of mocking for his lack of awareness, the politician commented that he had “full respect” for Black Lives Matter campaigners. But to be perfectly honest, quite a few people on this side of the pond felt clueless when they first saw kneeling people in the media coverage of American protests.

While an image of Martin Luther King Jr. going down on one knee while in prayer at a civil rights march from Selma to Montgomery in 1965 has been widely used in recent years, it’s not Reverend King who made the pose a symbol of protest. Its story is much more recent: the act of taking a knee originated in American football when in 2016, San Francisco 49ers quarterback Colin Kaepernick knelt during the US national anthem. It didn’t go unnoticed, since according to the United States Code, those present when the anthem is played, should stand at attention with the right hand over the heart. By refusing to follow the standard protocol, Kaepernick wanted to call attention to racial injustice and police violence. Although the gesture sparked years of debate among sports fans and officials alike, it has been widely adopted during the current police brutality protests, at times serving as a sort of “friend-or-foe” identification.

What started as a way of showing solidarity, soon became a mandatory gesture expected of everyone appreciating the ideas of racial equality. On July 5, for example, at the start of Formula One’s Austrian Grand Prix, most drivers took a knee to demonstrate their support of the BLM cause, yet five drivers abstained from making the gesture. Among them was Daniil Kvyat, the only Russian F1 driver. Although his behaviour generated some criticism online, it’s worth mentioning that many Russians do interpret kneeling as a sign of submission. To them, it is associated with a ceremony when a subordinate pledges allegiance and demonstrates submission to his feudal lord. A situation when bending one’s knee would be considered acceptable in Russia is begging pardon for a severe personal transgression. Since Kvyat wasn’t racist, he said, he didn’t feel the need to demonstrate his repentance by going down on one knee. So, it’s worth remembering that symbolic gestures are phenomena of a particular culture and cannot always be transplanted into another one and preserve their original meaning. Although Americans seem to have grasped the meaning that taking a knee has in the modern culture, some still disagreed if it’s appropriate for members of law enforcement to take a knee during protests — even if they back the cause. While some police officers felt it was the right thing to do to separate themselves from a culture that ended in the murder of George Floyd and of other Black men, others used it as some kind of de-escalation tactic, apparently feeling there was no other way to appease the crowd.

NYPD Lieutenant Robert Cattani was among the cops who submitted to demonstrators’ chants of “NYPD, take a knee!” during a protest in lower Manhattan. A few days later he circulated an e-mail apologising for his behaviour to his colleagues, calling his decision to kneel with protesters “horrible” and saying that he regretted it. In a letter that leaked to the press, he wrote: “I thought maybe that one protester/rioters who saw it would later think twice about fighting or hurting a cop. I was wrong. <…> we made that bad decision. I know that it was <…> something I will be ashamed and humiliated about for the rest of my life.”

NYPD lieutenant apologizes to his colleagues for kneeling during a protest for George Floyd. Lt. Robert Cattani decided that kneeling for George Floyd wasn’t worth the trouble it would cause him among his fellow police officers.#GeorgeFloydhttps://t.co/laDNiymjlR pic.twitter.com/aHONt3FAsq

However, not all policemen who knelt at protests across the country throughout the unrest — including NYPD Chief Terence Monahan — regret their actions. American lawmakers also used the gesture to make their affiliations clear: congressional Democrats knelt for eight minutes and 46 seconds in memory of George Floyd before presenting a package of police reforms in response to the killing of African Americans by law enforcement. In the same vein, the players of the New York Yankees and Washington Nationals opening the Major League baseball season went down on one knee to honour the Black Lives Matter movement. People would take a knee in town halls, in squares, during rallies. They would post selfies on social media with a hashtag #takeaknee to make sure their solidarity against racial injustice wouldn’t go unnoticed. Over the past few months, many felt as if failing to take a knee in public would make them look tone-deaf or, worse, racist. 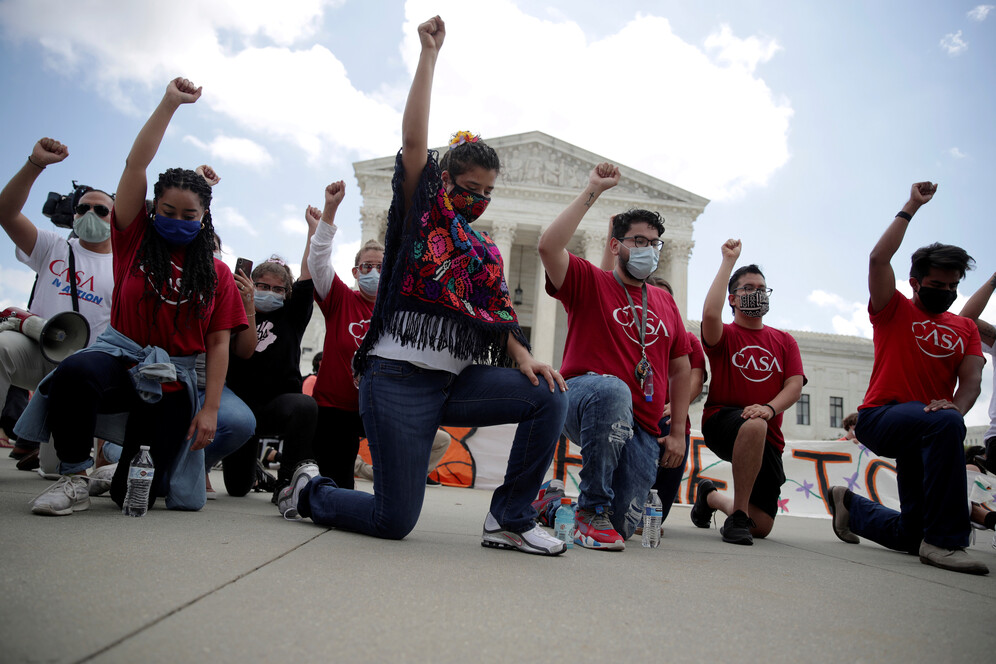 People take a knee in support of the Black Lives Matter movement outside the U.S. Supreme Court in Washington/REUTERS by Jonathan Ernst

As for the very few not on board with the action, they had to defend their right to remain upright while the whole world was kneeling. When BML protesters demanded a black state trooper from Georgia O’Neil Saddler joined them on one knee during a march in Hartwell, he refused to do so saying the only “person” he kneels before is God. The footage of his refusal was posted online and stirred a lot of debate. After some social media users tried to slam his choice, he was forced to remind the Facebook audience that “Any person has a free right in America to do as they want, kneeling or not”. Freedom fighters or regular folks, Americans or not, we all have the right to do as we feel, rather than told. In the case of symbolic gestures, it might be even more important, unless we want to turn a meaningful act into a hollow symbol.