A mask: The many-sided accessory of the COVID era

Faces are the most unique and vulnerable parts of our body. This is why issues of modifying and covering it broach a lot of added value and meaning. During the coronavirus pandemic, masks have made a troubling comeback, and it looks like they are here to stay. If we take a look back, we'll see they've been in our lives all along in more ways than we can imagine.

Whenever a chapter bears the title "History", it's bound to start with Ancient Egypt. Egyptian funerary masks resembled the faces of the dead as they allegedly guided the spirit back into the body. Masked bodies were easier for the souls to recognise and protect them from evil. Now the Egypt part has been taken care of we can move on to the next points. 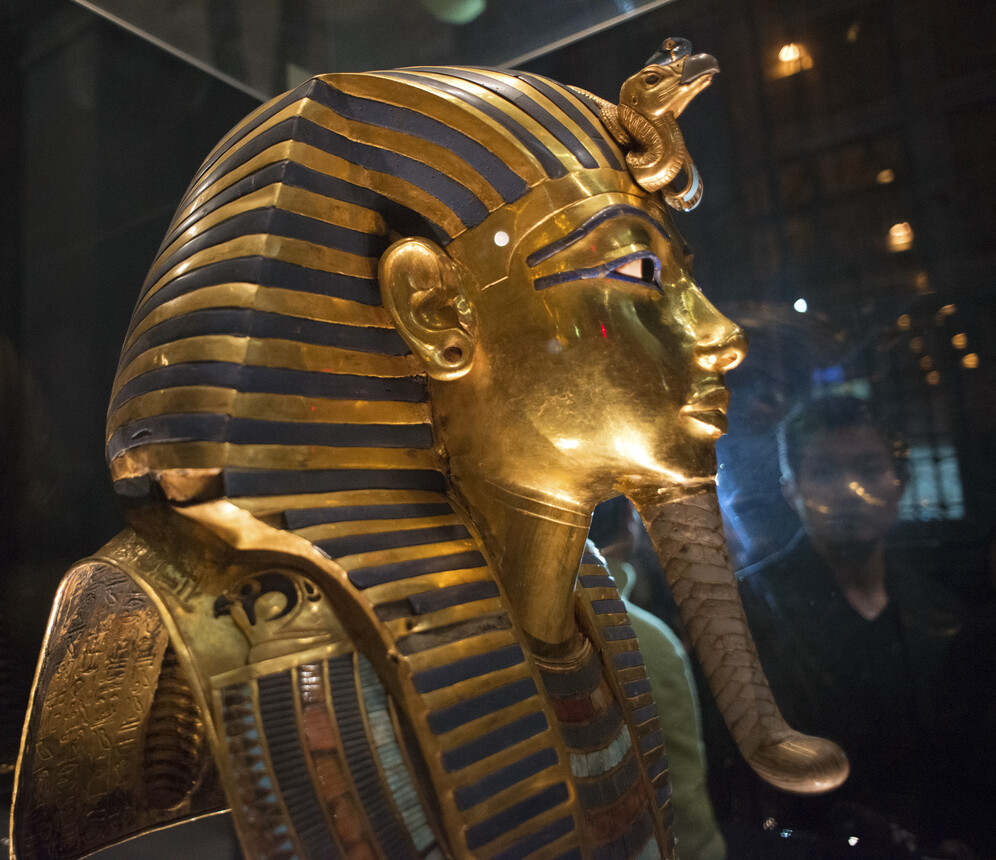 The mask of King Tutankhamun, which was found to have been damaged and glued back together, is seen at the Egyptian Museum in Cairo / REUTERS by Shadi Bushra
Throughout history, masks have existed to hide identity, change identity and highlight the already existing identity for intimidation or spiritual connection.

Masks' mysterious implications are widely exploited by popular culture, particularly, in horror movies like Scream or Halloween. Masks used by tribal chiefs and shamans in their rites were given almost supernatural powers. And for a good reason: look what the mask has done to poor Jim Carrie! 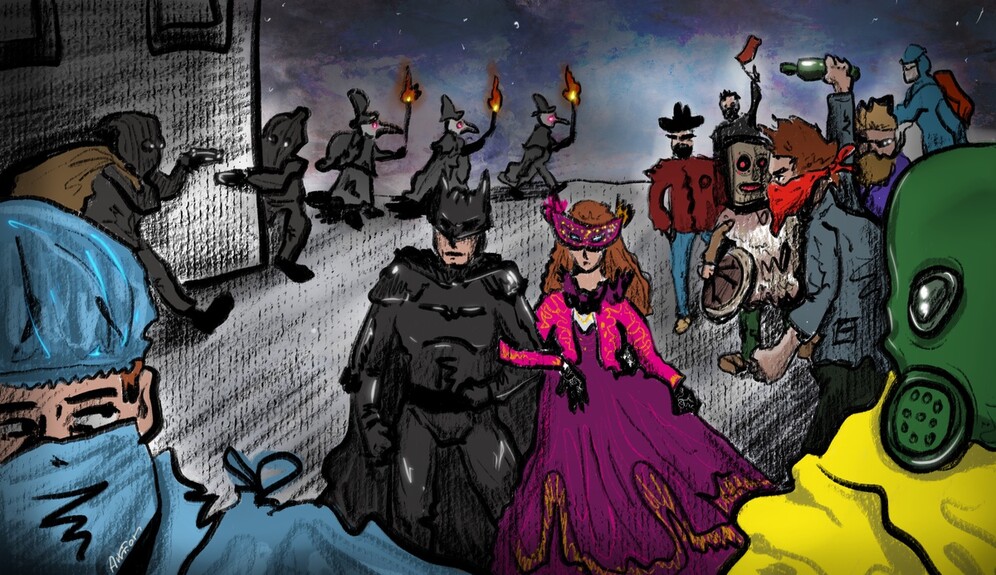 Festivities that push the participant to wear a mask and assume another identity — masquerades, carnivals and Halloween hail the diversity and a chance to be more beautiful or just different./Illustrated by Arina Ionova
The mask was also used for protection.

Even the iron helmets of the Crusaders are a prototype of protective masks and so are athletic football or hockey helmets. Masks marked the world's scariest diseases like the bubonic plague with its pervertedly iconic nosy masks and the Spanish flu pandemic of 1918. A plethora of mask-like intricate coverings was used to disguise the unsightly consequences of leprosy or smallpox. 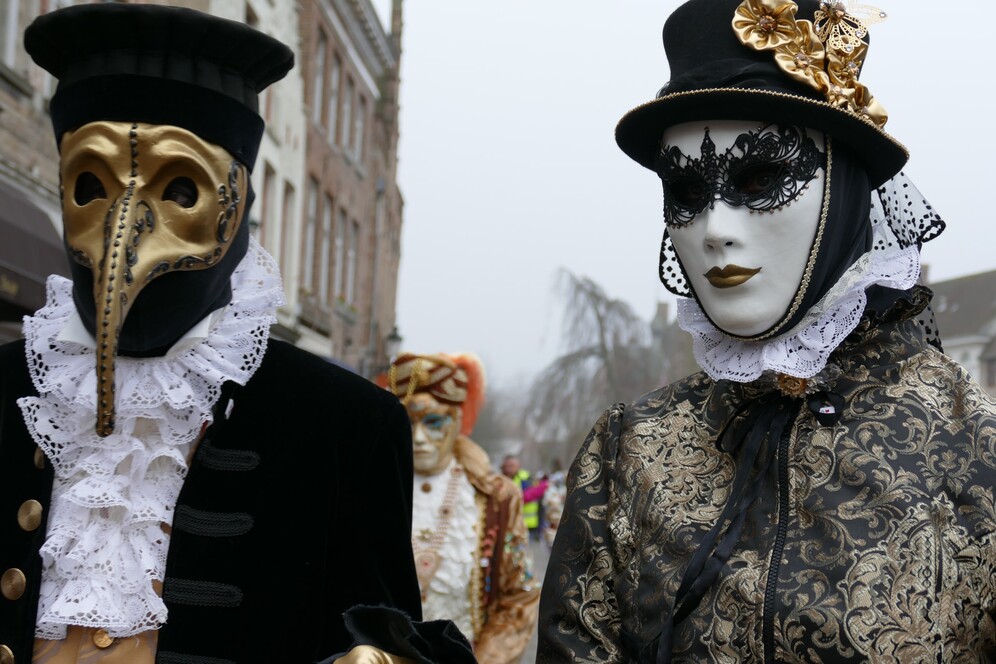 In Italy, the post-bubonic plague trauma was processed through the performance and carnival. The bubonic plague pandemic appeared in the intermittent outbreaks from the 14th till the 20th century. Another obscure purpose of the carnival mask was to cover facial deformities from war or other injuries/Marc Vandecasteele via Unsplash

The technology and progress advanced, as did the perils that demanded that people stayed protected. WWI pioneered chemical warfare inciting the creation of modern gas masks. But it wasn't a totally new development. The prototype had come a long way before American Garrett Morgan patented the Morgan safety hood and smoke protector in 1914. A year later, a Russian chemist Nikolay Zelinsky came up with an enhanced version of a gas mask that could not only filter out the soot, but also the majority of the poisonous gases.

For what it's worth, WWI was the true breeding ground for all sorts of face covers, including designs made for those injured on the battlefield. The soldiers too disfigured to qualify for plastic surgery became clients of the Masks for Facial Disfigurement Department formed by Francis Derwent Wood. Later, a similar job was taken up by Anna Coleman Watts. 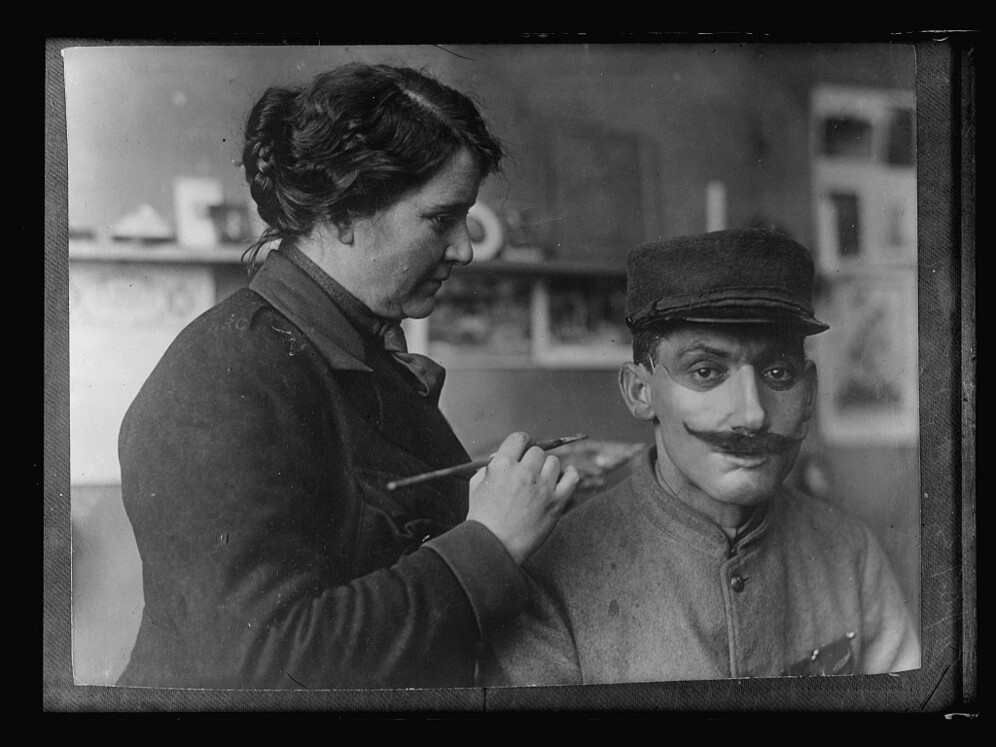 Anna Coleman Watts is working with a patient/Library of Congress via loc.gov

Five-ounce metallic masks were as thin as a business card and more permanent than the existing rubber prosthetics were customised to fit perfectly and to reconstruct the soldier's pre-war face fully. Though such a solution was very comforting for the morally tortured soldiers, the masks weren't durable enough and quickly went out of commission.

The mask translated a sense of suspicion and doubt.

Covering one's face is the opposite of friendliness, as it conceals a person's face and consequently, his or her true intentions. This was the reason why acting was considered an outrageous if not dangerous occupation — actors covered their true selves, pretending they are someone else. Masks were the accessory in that crime in every sense of the word.

Cowboys, Robin Hood, and soccer fans cover their face to assure their opponents they are up to no good. Paradoxically, this is the same place superheroes come from. Though many of them are by definition paragons of virtue, they are still forced to wear a disguise including a mask: unmasked, their powers may come in too strong for your average citizen.

In his article, "Masque-ulinities: Changing Dress as a Display of Masculinity in the Superhero Genre", Friedrich Weltzien, a German philosopher, points out the fact that the more concealing the mask is, the more tempting it is to rip it off and take a peek under it.

Masks tease, cast doubts and prompt anxiety, as they turn a human person with a face into an enigma.

For this reason, that is, to throw off the enemy, masks were welcome, say, among the soldiers of Alexander Macedonia or Roman gladiators.

Masks do not always stay true to their single purpose. A bandana or a rag was an essential piece of a cowboy's outfit with a rich history. Before it gained its ragged charm from all the John Wayne westerns, it was used to wipe the sweat to protect from sunburn during a long day moving cattle. However, there is a very fine line between the ordinary and the criminal. For example, cowboys covered their faces with bandanas to keep from the dust, but at the same time, they would hide their faces robbing a store.

Anonymous Guy Fawkes mask is a stylised depiction of the best-known member of the Gunpowder Plot of 1605 — an attempt to blow up the House of Lords in London to restore a Catholic head of state. Revived in 1982 by the V for Vendetta comic books, it was appropriated by Julian Assange during the 2011 Occupy London Stock Exchange, when its function shifted from mere disguise to symbol of rebellion. 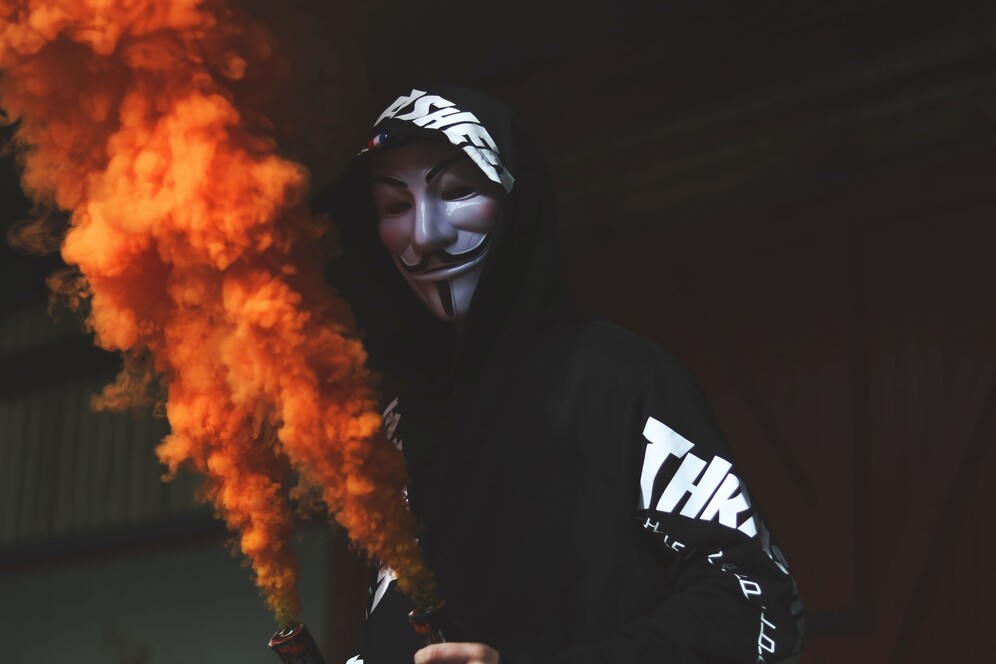 Surgical masks as well as firefighter helmets undoubtedly have the air of heroism.
Of course, modern surgical masks are not as deathly fashionable as their beaky anti-plague predecessors. The prototype of the modern surgical mask first appeared in the late 19th century as a means to prevent the bacteria from spreading. It consolidated the position in the 1910s, as the Chinese authorities tried to prevent the spread of pneumonic plague, but its real triumph came during the Spanish flu pandemic of 1918.
Ultimately, the masks have become practically a wardrobe essential for people in the Asian countries. In the 21st century, they did make a worldwide comeback during the two major outbreaks of Sars and Mers, but not as massive as the 2020 appearance.

As many resources post the information on how to wear the masks, others still debate if wearing them is actually necessary for healthy people. Unfortunately, as of right now, it is majorly up to us to decide if we want to wear the masks or not. While the WHO’s advice is against such protection, the CDC is of an opposite opinion. As for the research, there still hasn’t been enough data to determine the absolute truth: for example one study proved that surgical and N95 masks successfully filter influenza, and another one, where the doctors had the patients with COVID-19 cough in Petri dishes through masks, was unsuccessful — the infection pulled through the masks.

So the question ‘to wear or not to wear the mask?’ still sounds with a truly Shakespearean ardor. 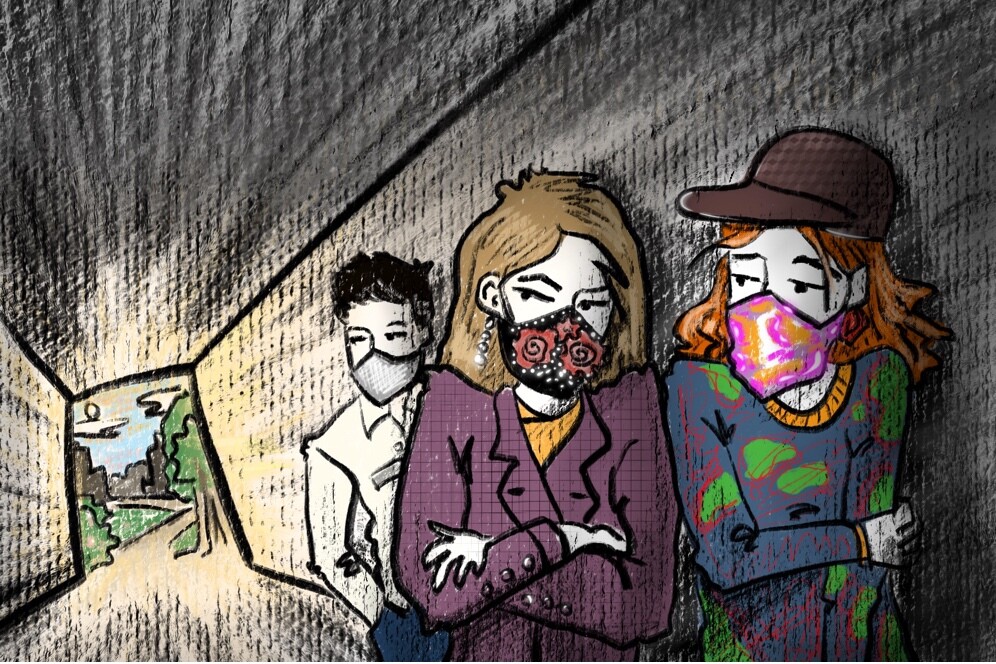 Along with evoking hostility, masks are a very good distancing tool that alienates people. Not seeing people’s faces and inability to read their emotions is troubling./Illustration by Arina Ionova

Obviously, the mask phenomenon couldn’t just happen without brushing with fashion and politics. Covering the face, or, on the contrary, bare face has been considered illegal in certain countries long before the pandemic, and the disease only made rules more varied and complicated.

Since very few modifications have been established to actually help against the virus, masks mostly provide the sense of security and become a sign of civil responsibility before others.

The masks are becoming the ominous token of the apocalyptic 2020.

Regardless of the fact that luxury brands, Aliexpress and a lot of accessory businesses have taken up mask production, there’s never enough of them, as people try to fix this shortage by trying to remember their homemaking classes and sew them by hand.

As far as the fashion trends go, while the fear of the disease clashes with the imminent economic crisis we observe how designers and fashion influencers merge together the two opposite notions of the mask — the protection and the hostility. And while for a Japanese youth these masks are a regular accessory, new, more radical designs, might contribute to the general unrest.

Victoria Gumerova, a fashion projects curator, says, “the majority of the designer masks that I saw, are in black and red. The person wearing such a mask looks rather belligerent and associates with protests, meeting, and all sorts of altercations. Under so much social tension and the crisis coming up, when most people are at their breaking point, it is utterly irresponsible to exacerbate the already dire situation creating these hostile looks.”

The future of the masks

Ksenia Gusarova, a cultural studies scholar at Russian Presidential Academy of National Economy and Public Administration:
The popularity of masks is pretty common for three major reasons:
- concern for the increased air pollution when using a mask may point at the existing problems on the environmental agenda;
- popularity of post apocalyptic ideas and the respective aesthetic in the mass culture;
- protesting against the omnipresent surveillance seen as breach of the personal privacy.
However, glasses or “clown” makeup are better suited for protection against CCTV cameras, post apocalyptic fantasies seem a little redundant, while the industry and transport put to a halt due to the lockdown solved the pollution problem, at least temporarily. In my opinion, most people would be happy to part with their masks once the protective measures are lifted.

Of course, there are designers who see this mask craze as a chance to experiment with new forms. However, these artistic statements are very likely to lose their charm and novelty once the pandemic subsides or becomes commonplace.