Two walls of tough young men stand on opposite sides of a dusty rural road. After emboldening themselves by bellowing war cries, they charge, clashing in a brutal melee. The brawl is over in just a few minutes, with members of the defeated side lying on the ground, clinging to bruised arms and bloodied heads. This is not a scene from a medieval battle movie, but a clip on YouTube of a fight between rival gangs of football hooligans in modern day Sweden.

Fights are sometimes prearranged between rival gangs, with the time, place, and number of combatants predetermined. Members of Sweden’s ‘Wisemen’ firm, one of the most violent in Europe, explain that hooligans need to train at the gym at least three times a week to sharpen their fighting skills and tactics if they are to be in top form for a brawl. For younger ‘Wisemen’, taking part in fights isn’t optional. It’s important for them to attend all the fights and games to prove they belong, and they're expected to take part in at least 5-6 brawls a year. The clashes generally last 1-3 minutes, until all of the opponents have either fled or been knocked to the ground. “I would rather win a fight against a really good opponent than win a football game ,” one of the ‘Wisemen’ explains. Despite being a family man and the owner of three restaurants, the founder of the Wisemen still takes part in his ‘firms’ fights. His wife and children don't know about his violent hobby © A still from the documentary film, Football Beasts/ RTD

Not all confrontations are quite so ‘civilised’. While rudimentary ground rules have emerged in some countries, such as not hitting a person when he’s down, ‘old school’ fights are still usually the norm in southern Europe, where anything goes. This can include crude weapons, including Molotov cocktails, rebar, and quite often knives. As a rule, intra-city matches or matches between teams with long-standing rivalries result in the most violence. For example, on match days when Athens’ Olympiacos v Panathinaikos football clubs meet, hooligan gangs scout for their rivals and attack them on the street or storm them in bars. Dozens of young Greeks have been mutilated and killed in this virtual guerrilla war, which has been ongoing for three decades. 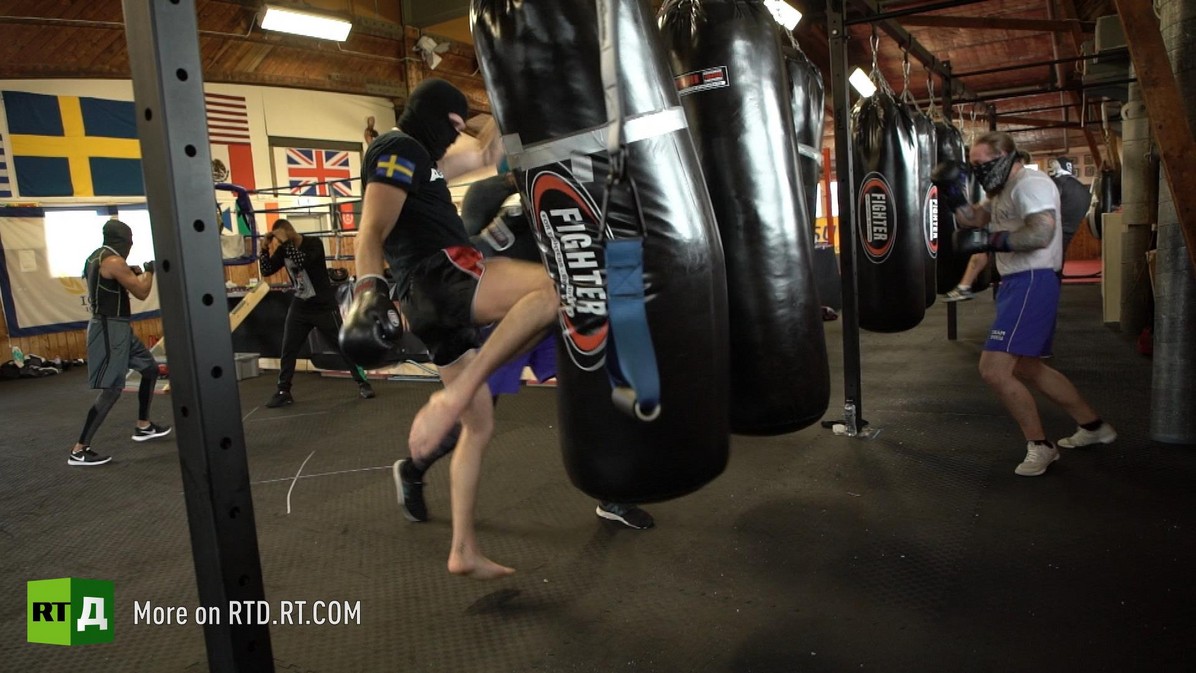 Wisemen football holigans train at the gym to sharpen their fighting skills © A still from the documentary film, Football Beasts/ RTD

Violence surrounding football is nothing new. In 13th century England, hundreds of men from neighbouring towns would gather as opposing mobs and attempt to drag an inflated pig’s bladder to a designated marker, or even into the rival village’s church. The medieval matches were more akin to a violet pitched battle than a game and bore little resemblance to football today. Olympiacos football hooligans cheer on their club at a bar, Football Beasts/ RTD

When the game began to emerge in its current form in the 19th century, violence was still its constant companion. Fights were often reported at British matches, with mobs attacking rival fans and sometimes even players. In a still notorious event, the disputed result of a game in Glasgow in 1909 led to a rampage involving 6,000 spectators that trashed the stadium and the surrounding neighbourhood and seriously injured over 50 police officers.

Modern football hooliganism originated in England amid the general social unrest of the 1960s, when working-class football fans began to organise themselves into gangs, known in Britain as ‘firms’, and fights between rival groups started to be planned, rather than occur as sporadic outbursts. Similar trends emerged in continental Europe about ten years later. 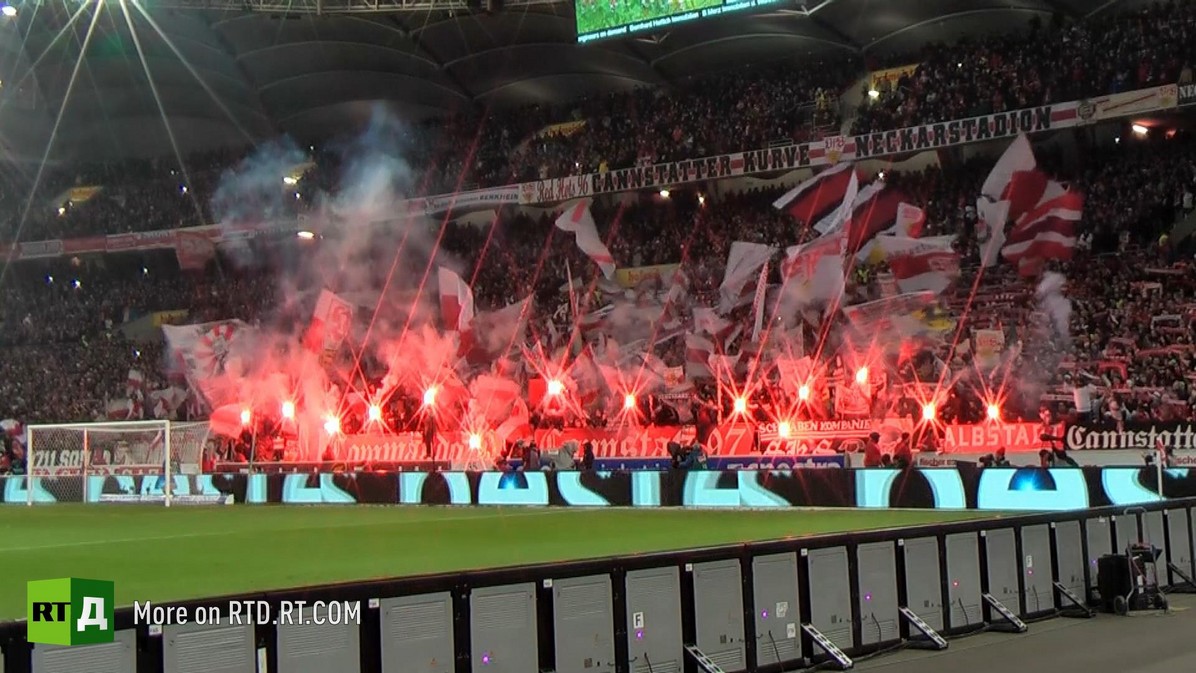 These ‘firms’ gained notoriety as the media showed them engaged in running street battles and stadium fights with rivals. The situation reached a head in 1985 when a stadium wall collapsed after Liverpool hooligans charged Italian fans at the European Cup final at the Heysel Stadium in Brussels. Thirty-nine people lost their lives that day, and over 600 were injured. Since then, hooliganism has been clamped down on, with a greater police presence at the stadiums and segregation of fans, but the phenomenon continues in most countries in Europe. 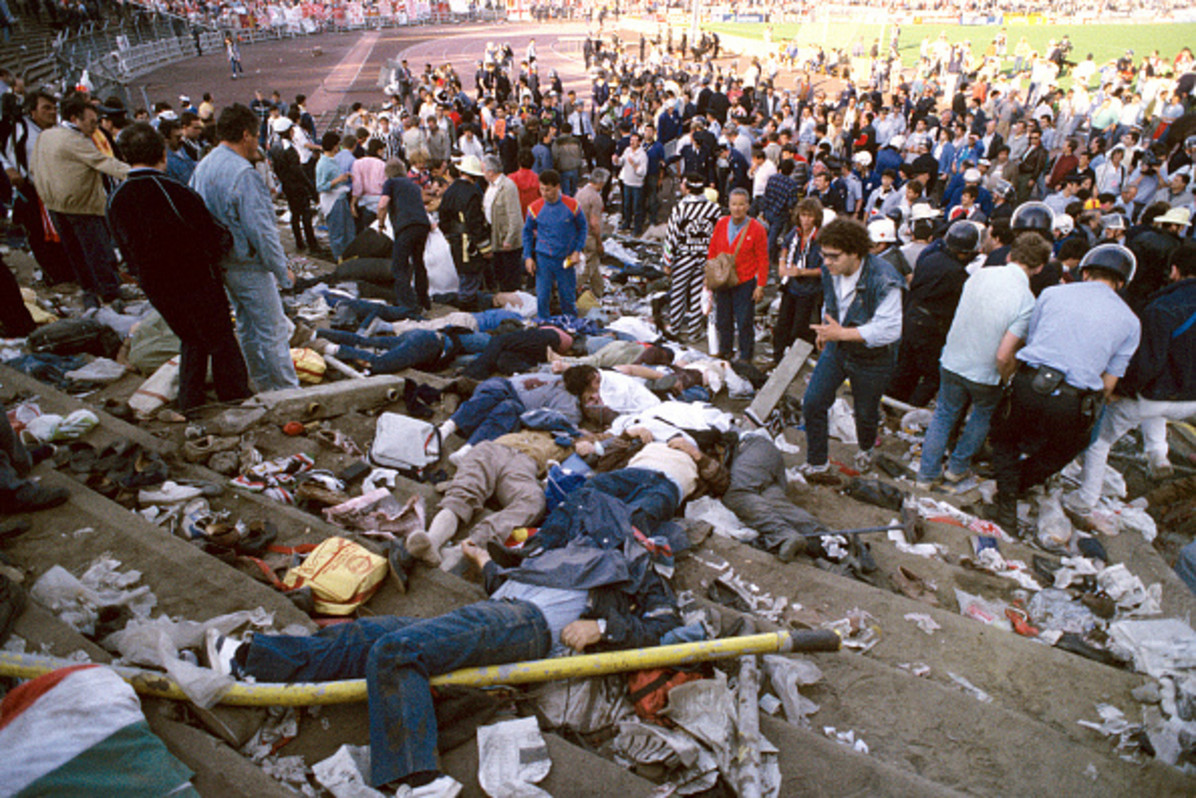 39 people died at the Champions Cup final between the Italian "Juventus" and the English "Liverpool" in Brussels on May 29, 1985 / Getty Images

Hooligan gangs provide a sense of excitement, brotherhood, and purpose for their members, who often start off as hardcore fans and then get drawn deeper into the subculture. A veteran VfB Stuttgart hooligan, Andreas Lenz, explained at the group’s private club, where members typically meet for a beer and a chat before matches, “of course, there’s this feeling of togetherness... It’s really great when you fight side by side with your friends or brothers.”

A younger Stuttgart hooligan described how he became a member after initially being captivated by the banners and pageantry of his football team’s ‘ultra’ fan club. “That’s how I entered the group, met these people, made a lot of friends. You just get sucked into it. Friends become brothers. These people become your family and… We have a cause that we fight for. It becomes your life,” he said. 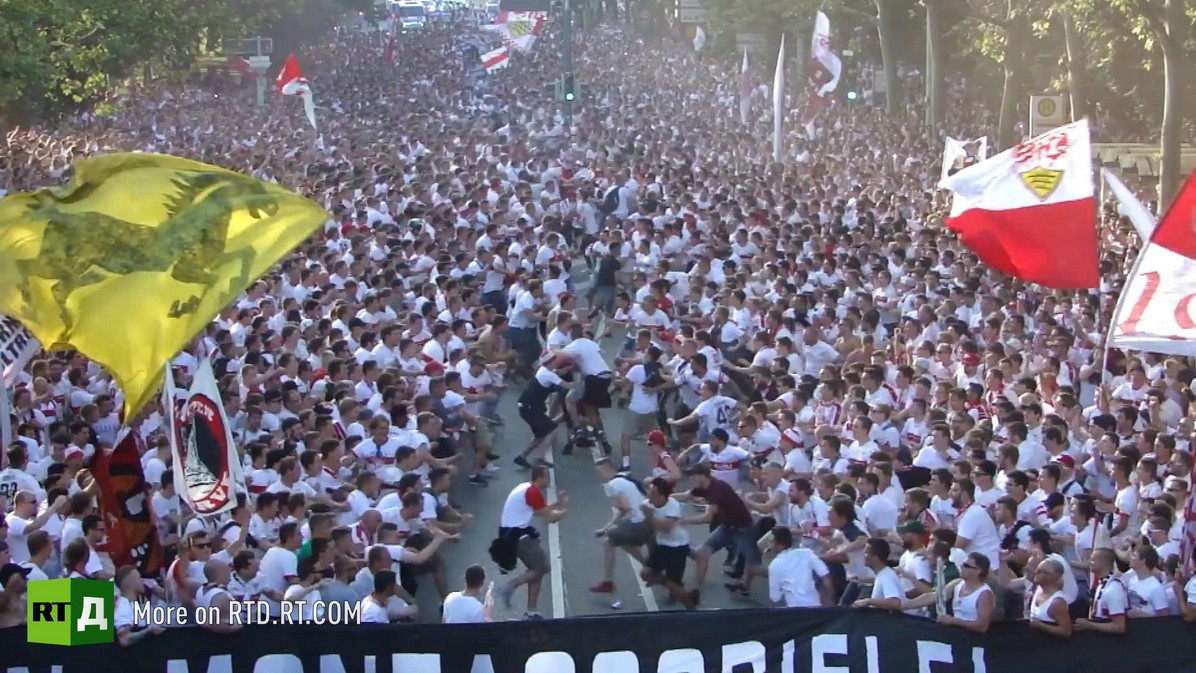 A member of the ‘Wisemen’ described the feeling of being in a fight as “an incredible rush. Adrenaline, euphoria, rage, all emotions mixed up in one,” while a young Stuttgart hooligan said “it’s as if you’re acting in a movie. You just do it. You give it all you have for your city.”

"The thrill associated with the violence seems to be more important to many hooligans than the fate of the football team they support. “It doesn’t matter if your team won or lost, what matters is if you gave it all you had,” says Lenz. 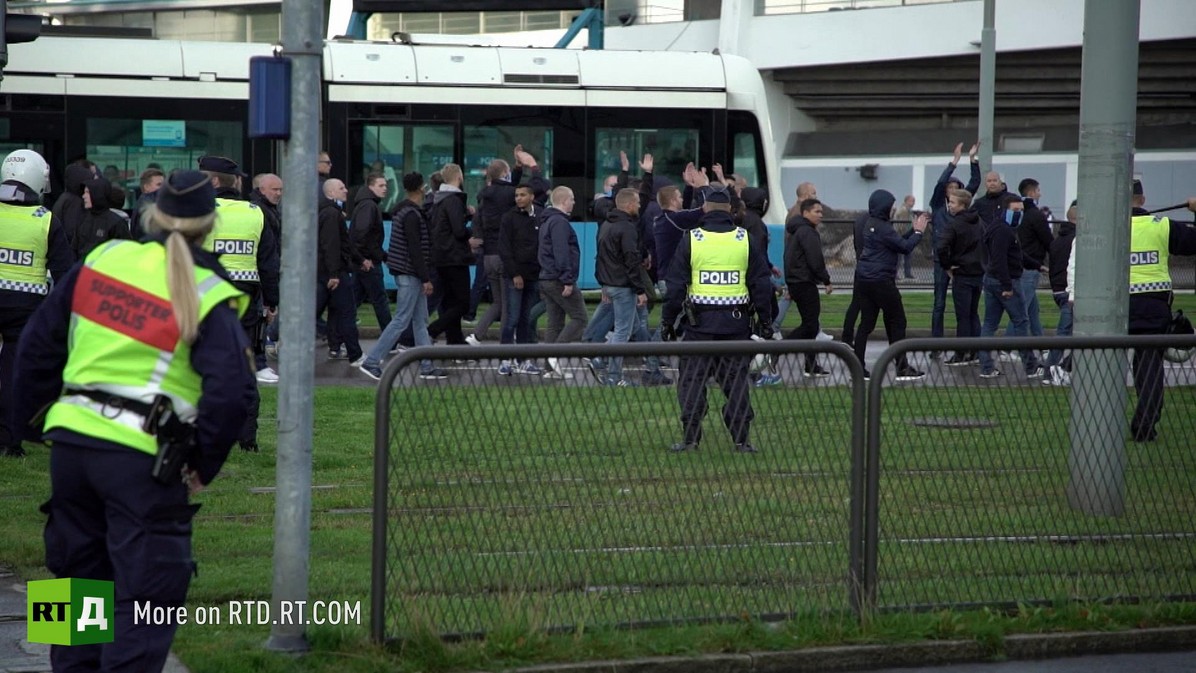 Governments have passed more punitive laws on hooliganism in recent years, while the police have been employing more sophisticated surveillance and monitoring techniques to deter hooligan violence. The firms, in turn, have begun to use the internet as a tool for anonymously organising their activities. 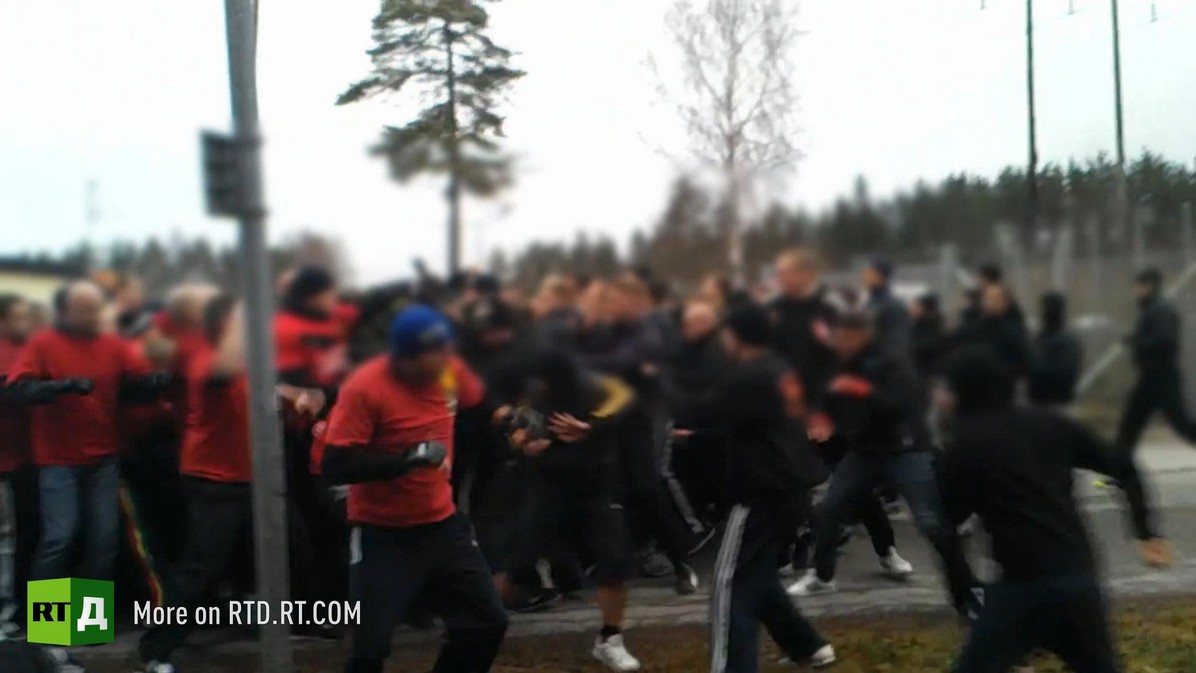 Amateur video of fight between the Wisemen and Firman Boys © A still from the documentary film, Football Beasts / RTD

Dougie Brimson explains this clandestine aspect only adds to the thrill of planning and participating in fights, adding it just goes to show how hooliganism is continually evolving. “Hooliganism is a beast if you like. And it evolves. It’s constantly evolving,” he says.

To find out more about Football Hooligans, watch Football Beasts on RTD website.