Swallowing Cholera Vibrios and Sucking Diphtheria Coating: How Russian Epidemiologist Daniil Zabolotny revolutionised infection treatment
Diet of the future: What should we eat to stay healthy and keep the planet safe?

You’ve got mail: Mail-in votes could determine the outcome of the 2020 US presidential election

During the 2016 US presidential election, the media was agog over Russia’s alleged attempts to meddle in the polls whose outcome surprised a large chunk of the American population. With elections looming in two months, loopholes and rigging possibilities are again one of the hottest topics in the American media. But this time around the enemy seems to be hiding within the ranks: mail-in voting has been chosen as a scapegoat to blame for everything that might possibly go wrong, come November 3.

In the country where the practice of absentee voting goes back to the time of the Civil War, everyone is suddenly preoccupied with the implications it might have for the coming election. Why is that? The coronavirus pandemic seems to be the answer to everything these days is indeed causing a seismic shift in pretty much all aspects of our lives, including the way Americans cast their votes.

Concerns that in-person voting might turn into a nationwide super-spreader event have pushed many states to relax regulations on absentee voting.

Nine states plus Washington DC decided to mail ballots to all registered voters ahead of the election eliminating the need to request them. This November California, DC and Vermont will do this for the first time. Several states introduced changes in time for the primaries held in June and intend to keep them for the general election. Others, including New York, are likely to relax their voting legislation but may do so through executive orders or similar measures closer to the election date. 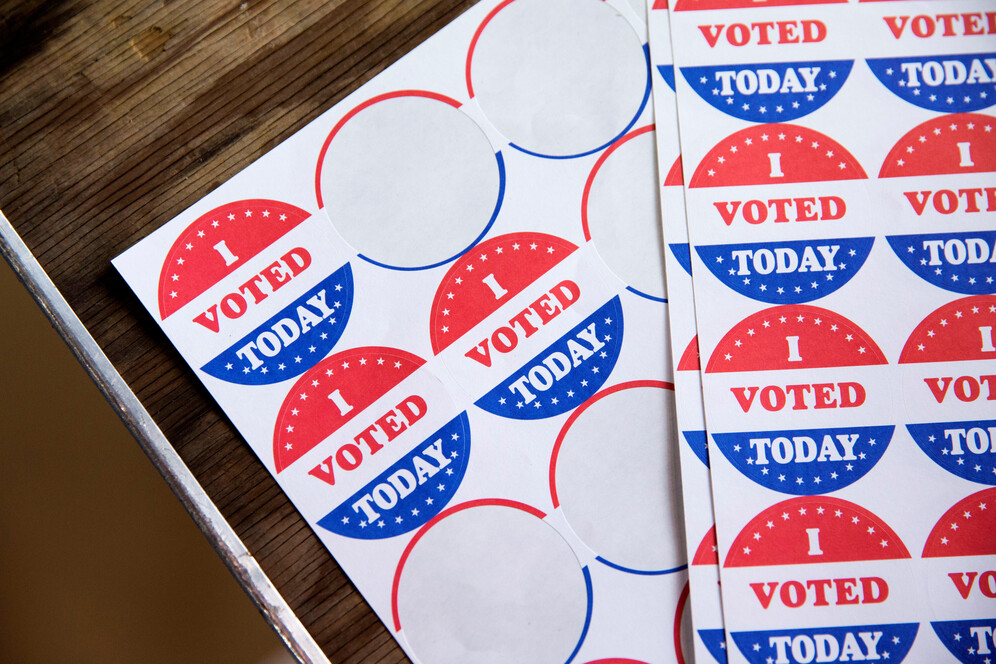 Stickers saying "I Voted Today" are given out to voters in the Democratic primary in Philadelphia, Pennsylvania. The city has provided masks, gloves, and hand sanitizers to poll workers and voters because of the coronavirus disease (COVID-19), and has also drastically decreased the number of polling places in use to accommodate the majority of voters who are expected to cast their vote by mail/REUTERS by Rachel Wisniewski

But mail-in voting should make it easier for more people to vote safely is something that bothers the American president – big time at that! On many occasions Donald Trump warned his fellow Americans that “Mail-in ballots are very dangerous – there’s tremendous fraud involved”. Ranting against the new voting paradigm, he projected that ‘You won’t know the election result for weeks, months, maybe years after. Maybe you’ll never know the election result.”

Trump is so concerned that he even solicited people to commit a punishable offence: he told a local radio station that voters in the state should test the system by sending in votes by post and then voting in person at a polling station on election day.

“Let them send it in and let them go vote, and if the system is as good as they say it is, then obviously they won’t be able to vote,” Trump said. In the wake of the President’s bold suggestion, state officials made several statements dissuading the public from taking his advice.

But why does President Trump find the prospect of the increase in mail-in voting so disturbing? Well, for one thing, it will increase voter turnout.

According to estimates, at least three-quarters of all American voters will be eligible to vote-by-mail in the 2020 election — this is more than ever in US history.

Some political analysts say it would hurt his party politically, and Trump seems to agree with them. He presumes the Democrats rather than the Republicans will benefit from a significant increase in postal ballots. However, many pro-Trump states have also adopted procedures that would make it easier for his supporters to cast their votes from the comfort of their homes.

Republicans should fight very hard when it comes to state wide mail-in voting. Democrats are clamoring for it. Tremendous potential for voter fraud, and for whatever reason, doesn’t work out well for Republicans. @foxandfriends

The concern Trump’s administration has voiced the most was that absentee voting is by definition, more open to abuse. But is there any evidence that postal voting could lead to widespread fraud? Experts say there’s none. But even though voting fraud in the US has been extremely rare, it isn’t entirely impossible. At least, some people admit to having tried it and succeeded. Funny enough, the closest approximation to a large-scale election fraud was something that happened in North Carolina in 2018, when a Republican candidate running for Congress, Mark Harris was found guilty of meddling with absentee votes. Trump, however, has never mentioned the story. He employed different imagery, suggesting that with mail-in voting “… you get thousands and thousands of people sitting in somebody’s living room signing ballots all over the place.” Well, the living room it is.

The increased volume of ballots will present a challenge to the United States Postal Service, that is barely coping with the pandemic-related increase in mailed packages.

The USPS staff – overworked and underpaid – needs all the help they could get to tackle the colossal task it’s about to face. The USPS has long been in dire financial trouble and carries $160 billion in debt has admitted it could not guarantee all votes cast by mail would arrive on time to be counted. This was in letters the USPS sent to some states in July. This could, in turn, create some issues including delayed result announcements or, worse, prevent the ballots delivered after a specific date from being counted at all. So delivering ballots on time is crucial when it comes to mail-in voting, whose rejection rates are already staggering as they are without being compounded by mailing troubles.

According to the Washington Post, tens of thousands of mail ballots have been tossed during the primaries this past June for various reasons, ranging from damaged envelopes to not-quite-matching voters’ signatures.

Indeed, given that 318,728 ballots were rejected in the 2016 general election, raising alarms about what might happen in November when the number of voters willing to cast their ballots by mail could double, is probably legit. Voting rights advocates warn the rejection of ballots could result in disenfranchising hundreds of thousands of people, which seems to be the same concern of Mr Trump. In battleground states like, for example, Pennsylvania which he won by less than 1% in the 2016 elections, or Michigan and Florida where Democrats and Republicans traditionally go neck to neck, even a couple of thousand rejected ballots could prove crucial. 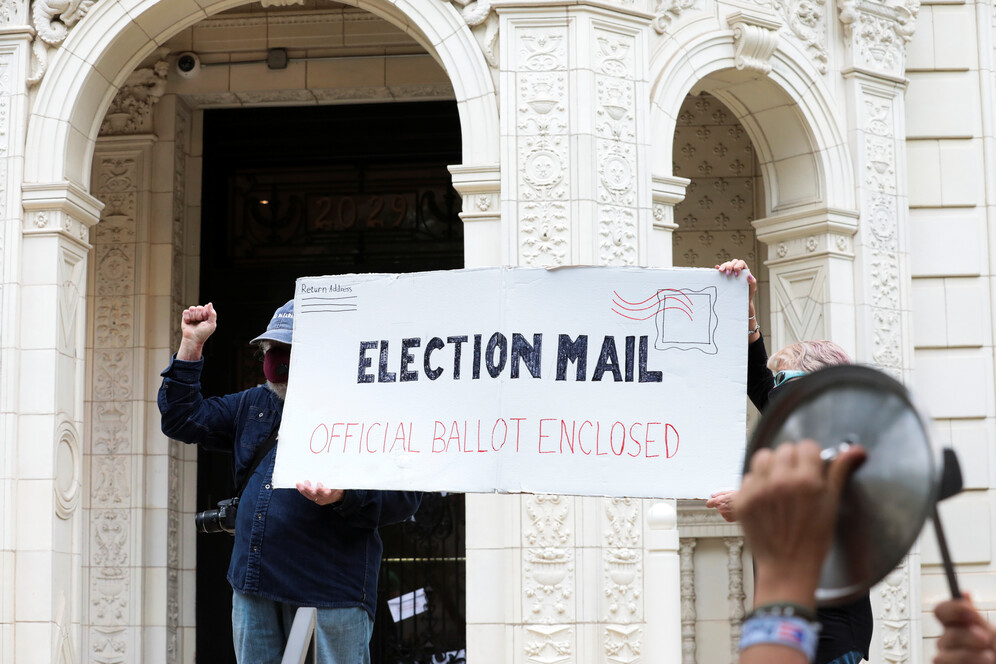 Just last week the US Postmaster General Louis DeJoy was grilled in Congress for introducing changes that have led to slower than usual mail delivery in some areas. The recently appointed official is a major Trump campaign contributor with significant financial interests in USPS competitors and contractors. It turned out he doesn’t know how much it costs to mail a postcard within the United States (35 cents), or how many Americans “to the nearest million” voted by mail in the last presidential election.

Given the USPS role in the coming elections, many consider the appointment of the new Postmaster General an attempt to sabotage the election process on the part of the current administration.

As far as money is concerned, the negotiations on additional country-wide coronavirus relief funding requested by the Democrats are in an impasse mainly because they proposed to allocate $25 billion of the $3 trillion in COVID-19 relief funds to the Post Office. And Trump makes it clear the deal won’t be reached as long as mail-in voting is on the table. In a recent interview with Fox Business Trump said, “They need that money in order to have the Post Office work so it can take all of these millions and millions of ballots. But if they don’t get those two items that means you can’t have universal mail-in voting, because they’re not equipped to have it.” In other words, he admits that he’s blocking the USPS funding to stop mail-in votes. 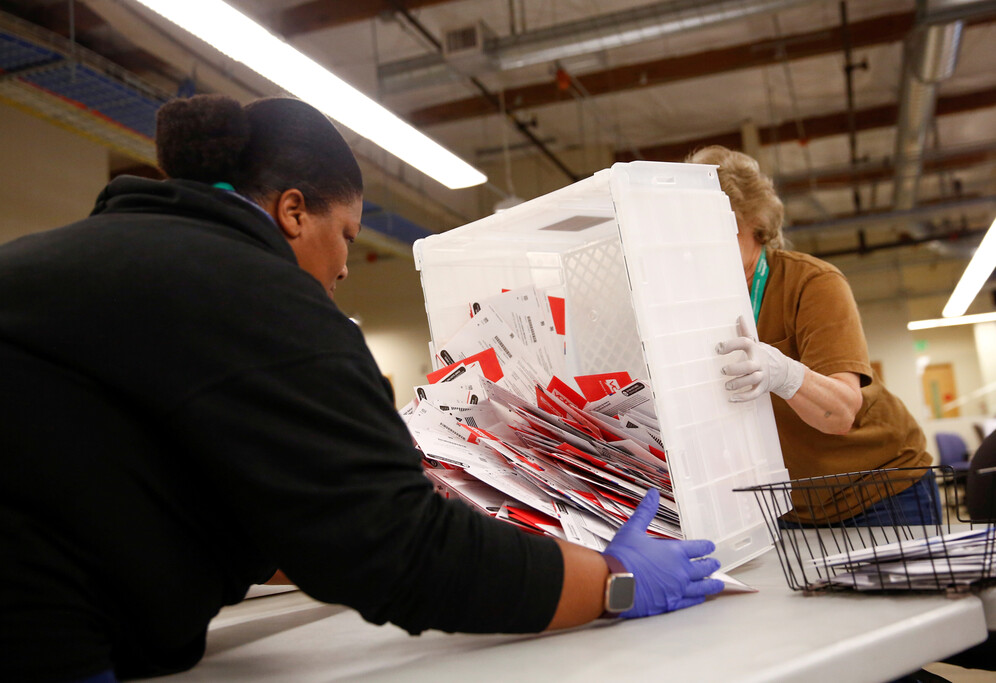 Workers empty a carton of ballots from a drop box to prepare them for the mail sorting machine during the presidential primary at King County Elections ballot processing center in Renton, Washington/REUTERS by Lindsey Wasson/File Photo

As for the Democrats, one of their chief concerns is that delays in tallying mail-in votes might lead to a so-called “red mirage” on election night. That is, they are worried Trump might declare victory based on the numbers of in-person votes before all the votes are counted. And should the tables turn once the mailed-in ballots get tallied, he might dismiss the results as “rigged”.

Well, at least Russians have nothing to do with it, right? But don’t jump to conclusions! According to CNN a recent bulletin issued by the Department of Homeland Security “warns that Russia is attempting to sow doubt about the integrity of the 2020 elections by amplifying false claims related to mail-in voting resulting in widespread fraud”. The report says “Russia is likely to continue amplifying criticisms of vote-by-mail and shifting voting processes amidst the COVID-19 pandemic to undermine public trust in the electoral process”. So, what DHS is saying is that President Trump’s repeated attacks on mail-in voting are nothing but the Kremlin’s agenda to sow discord in the nation and get him re-elected?

What’s even more fascinating, is that President Trump has repeated the warning issued by the DHS with regards to possible Russia’s interference in mail-in voting, which makes the situation even more confusing. Speaking on Fox News, he quoted the bulletin, saying “…you can’t send out 60 million mail-in ballots to everybody... who knows who’s getting them?” “The mailmen are going to get them, and people are just going to grab batches of them. You talk about China and Russia; they’ll be grabbing plenty of them”. And, perhaps, vote in place of Americans? But who would they vote for in this case?

Well, the only thing one can be sure of is that the mailman isn’t the only one to blame…