Male Bodypositive: Healthy body image sacrificed at the altar of societal expectations
“Strongest Evidence in Favour of Reincarnation”: The Startling Story of the Pollock Twins

Covid-19 vaccine skepticism among medics: Should we be worried, too?

Throughout the year that the coronavirus crisis that left no country and, perhaps, no family unscathed, the arrival of vaccines was touted as humanity’s only hope. The world needed them, and it needed them fast. Initially, experts warned that the rapid development of a safe and effective vaccine was unlikely, since it normally takes years. The coronavirus pandemic, however, posed such an imminent and pervasive threat, that the industry employed all of its capacities and delivered in the shortest possible time.

Several countries’ endeavors to create successful Covid-19 vaccines seem to be bearing fruit. Although there’s still only a handful of vaccines authorized for use around the globe, many more are undergoing clinical trials or awaiting approval. Anxious to roll out their products faster, some pharmaceutical companies sought emergency authorizations for their vaccines, while others compressed the trial process, conducting several phases at once. Currently, American vaccines by Pfizer and Moderna, and the UK-developed one from AstraZeneca have been approved for use in most countries, followed closely by Russia’s Sputnik V and China’s Sinovac. EpiVacCorona – Russia’s second vaccine, China’s Sinopharm and India’s Covaxin are yet to be approved by countries other than their own. 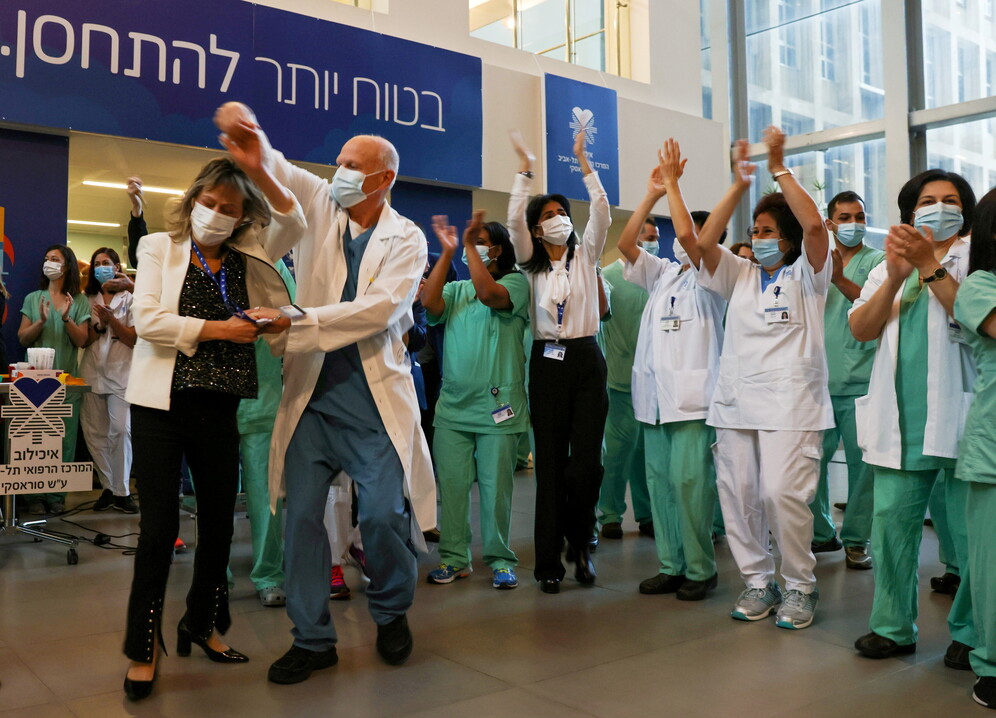 So far, there’s just a handful of nations that seem to be doing reasonably well on the vaccination front, with Israel leading the pack — over 60 percent of the country’s population has already had least one dose administered.UAE is second with over 40 percent, followed by the UK and the USA with over 17 and 11 percent each. But that’s just the tip of the iceberg, since most countries haven’t had a chance to administer any vaccines at all. Worldwide demand still far outnumbers supply, no matter how many doses a country has managed to secure with the manufacturers. One way or another, we’re witnessing the biggest vaccination campaign of our times. According to Bloomberg by February 7th, more than 131 million doses have been administered across 73 countries.

Apart from the vaccines’ efficacy and safety, the main concern has been availability.

Since the industry’s production capacities aren’t nearly meeting the demand, all the while discussions about which populations should be getting their jab first were getting more and more heated. In most countries the first group to start getting the Covid-19 vaccines are healthcare and essential workers, followed by older people (+65) and younger populations with medical conditions that put them at high risk for severe Covid-19. If you don’t fit into any of the above categories, you might not get the jab anytime soon.

With that picture in mind, the reports that certain people are refusing to get inoculated, despite being offered a chance to do so, sound insane. Who are those people, one might wonder? Perhaps, they are Covid deniers or antivaxxers, who believe coronavirus is nothing but a government conspiracy and all vaccines are evil by definition? Or maybe these poor people simply cannot afford the risk due to their numerous medical conditions that may lead to possible vaccine complications? These kinds of reasonings are understandable — or at least predictable. However, it’s pretty hard to wrap one’s head around the fact that doctors and nurses are opting out of being vaccinated in droves! 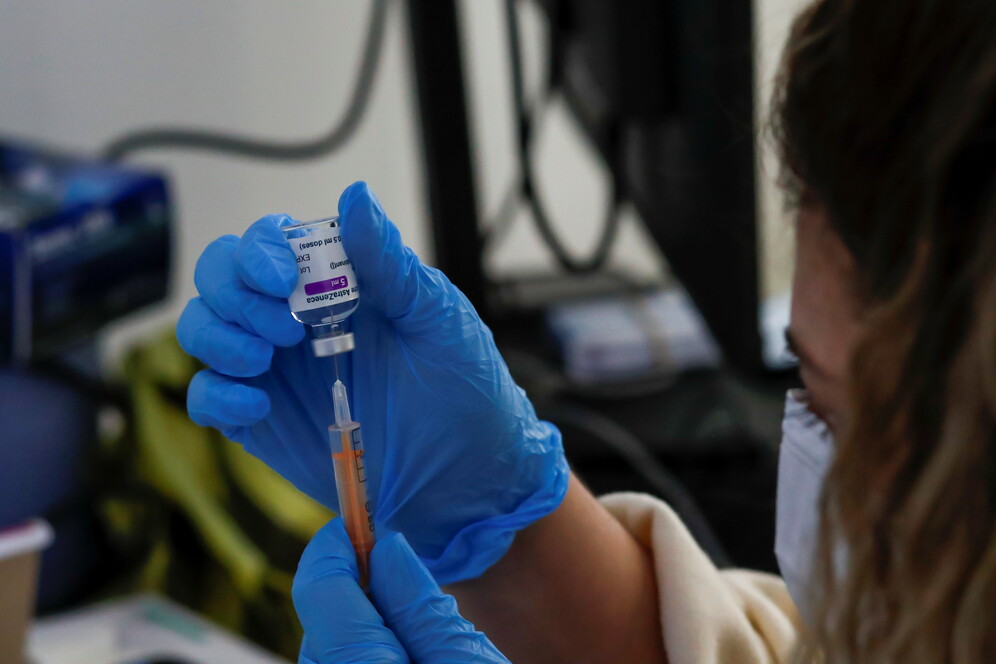 A dose of AstraZeneca vaccine is prepared at a COVID-19 vaccination centre Great Britain./REUTERS by Andrew Couldridge

All through Europe and the US, healthcare and frontline workers have been prioritized to receive coronavirus vaccines as soon as they became available. And this only seems logical: with the pandemic in full swing, those exposed to the greatest number of contacts on a daily basis and responsible for saving lives should be the first in line. Most people view it as a kind of perk that comes with an extremely demanding and oftentimes perilous job. However, once the vaccinations started, it was soon discovered that a surprisingly great number of doctors and nursing staff are balking at the shots.

As many as 15 percent of American healthcare workers who had been offered the vaccine at the time of the survey (53 percent of all respondents), refused to get the vaccine,

a recent survey by Surgo Ventures indicates. This is an extremely high number, considering that healthcare professionals are not only at high risk of contracting Covid-19, but are also instrumental in administering vaccines and encouraging their patients to get vaccinated.

The main reasons for refusal cited were the perceived lack of evidence of the vaccines’ effectiveness and safety (31%), concerns of personal safety (24%) and the rushed approval process (16%). Interestingly, Black healthcare workers were among the most hesitant, with 35% opting out of vaccinations. 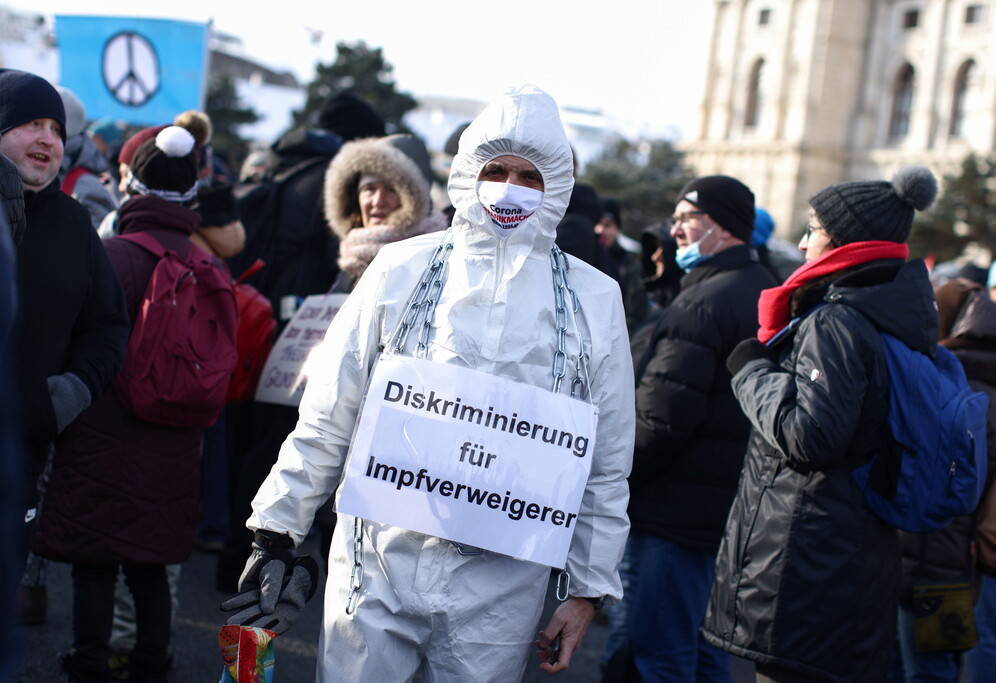 A protestor wears a sign reading "discrimination for vaccination refusers" during a demonstration against the coronavirus disease measures and their economic consequences in Vienna, Austria./REUTERS by Lisi Niesner

According to Deutsche Welle the situation in Germany isn’t much different: “the survey conducted by the "German Society for Internal Intensive Care and Emergency Medicine" (DGIIN) and the "German Interdisciplinary Association for Intensive Care and Emergency Medicine" (DIVI) back in December last year showed that only 73% of doctors, and just under 50% of nurses, in Germany want to be vaccinated against SARS-CoV-2”. Just to remind you, Germany has been at the forefront of the race for a vaccine with biotech company BioNTech that partnered with Pfizer to produce its pioneering vaccine. Still, the majority of respondents agreed that inoculation is important to contain the pandemic, but, remarkably, preferred not to take part in the general effort.

In France public wariness of Covid-19 vaccine as well as that demonstrated by healthcare workers is quite extraordinary, too: a poll carried out by France’s care home union Fehpad in December found that

out of almost 2,000 health workers at retirement homes, 76% did not wish to be vaccinated against Covid-19, even though they cater to elderly patients at a higher risk for severe illness and mortality.

When medical personnel refuse a chance to get inoculated from the disease that has already claimed millions of lives, it is indeed a cause for concern. When doctors and nurses who have confronted the damage of Covid-19 firsthand and continue doing work that puts them and their families at risk every day, prefer to wait out, it definitely should mean something? One inevitably starts second-guessing oneself, wondering if there’s something to the long-awaited vaccines that we laypeople don’t know? And that, perhaps, we shouldn’t rush into getting it either? 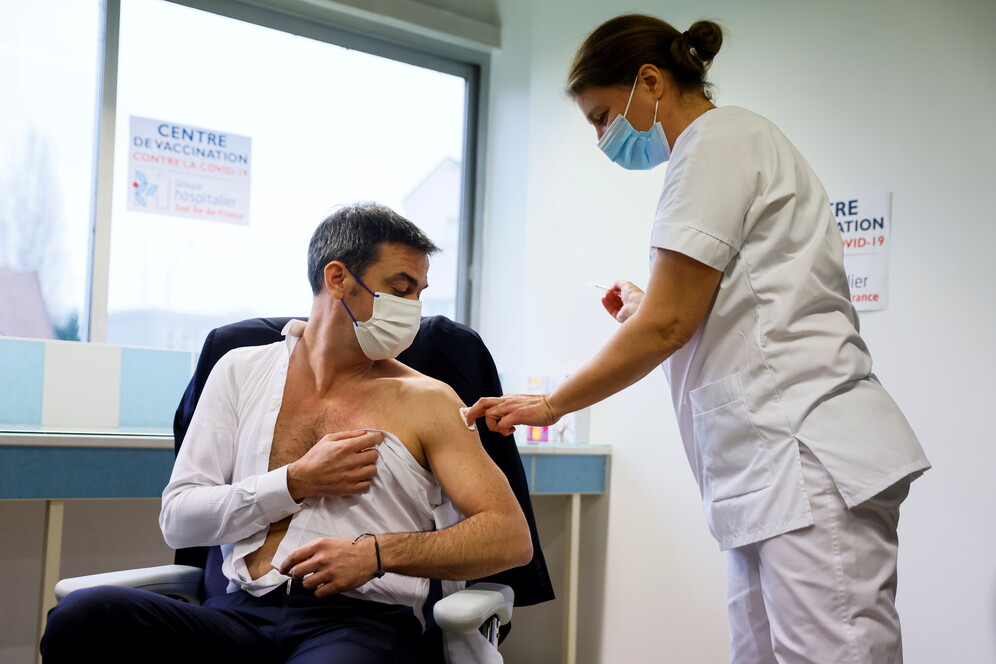 What are the reasons for vaccine skepticism among healthcare workers? Believe it or not, they are quite the same as those driving regular people. Some fear possible long-term side-effects of the vaccine, others are concerned that the rushed trial and authorization process resulted in an inferior quality product with unknown health implications. Some women are worried about the risks involved if they later go on to become pregnant. Also, since inoculation won’t give nurses exemption from wearing masks anyway, its benefits don’t seem that immediate. Apart from that, many doctors and nurses have already developed antibodies after having been exposed to coronavirus and don’t feel like following the CDC guidelines urging people to get vaccinated regardless of whether they’d already had Covid-19 infection.

Some doctors believe there are people more in need of the vaccine than themselves, and would rather wait out until other prioritized categories have received their dose.

Although a high degree of reluctance towards the vaccine among medical staff paints a confusing picture, according to New Yorker magazine, “health-care workers express similar levels of vaccine hesitancy as people in the general population.” Which only proves that, whether medically trained or not, we are all human. We all share pretty much the same fears and preconceived notions, we fall victims to peer pressure, and sometimes don’t bother seeking answers to the questions that concern us.

Commenting on the phenomenon, Nicholas Ruiz, a Natividad Medical Center employer, noted that “the perception of the public with healthcare workers is incorrect. They might think we’re all informed of all of this. They might think that because we work in this environment. But I know there’s a lot of people that have the same mentality as the public where they’re still afraid of getting it.” 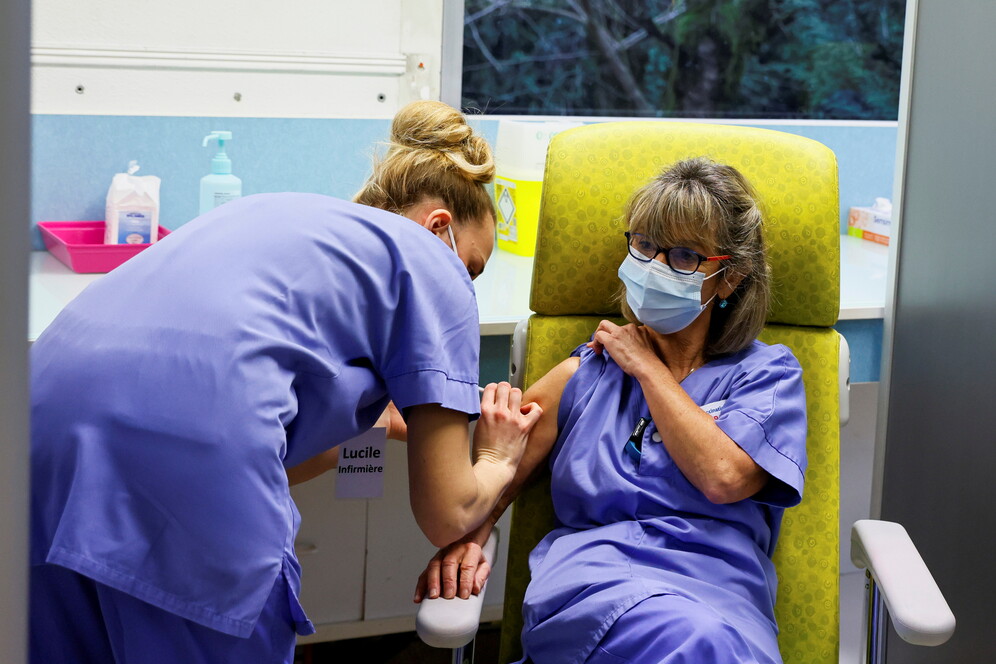 A medical staff member vaccinates a colleague with a dose of the AstraZeneca-Oxford COVID-19 vaccine./Thomas Samson/Pool via REUTERS

However, medical professionals must be fully aware of their responsibility for curbing the current pandemic. The WHO report published on October 15, 2020 states: “Studies have shown that health professionals are more likely to recommend vaccination if they themselves have been vaccinated.” Hence greater vaccine acceptance by doctors can and will in turn lead to greater acceptance and uptake by the general population.

While there are still no legal requirements imposed on doctors to take the vaccine, US labor law experts don’t rule out that medics could potentially face dismissal if their employers can make a strong case that non-vaccinated staff pose a health risk to their patients.

America’s leading immunologist Antoni Fauci recently noted that although vaccinations aren’t normally mandated at a federal level, “there are going to be individual institutions that I'm sure are going to mandate it,” just like “influenza and Hepatitis B vaccines are mandated at many hospitals.” Using the carrot rather than the stick approach, instead of penalizing staff members who wouldn’t get a jab, institutions like Houston Methodist, a leading hospital in Texas, are offering its workers a $500 bonus if they get the vaccine, hoping it might persuade those who are reluctant to sign up.

In the meantime, Italy’s Deputy Health Minister Pierpaolo Sileri voiced a rather harsh criticism of the situation, saying “I am perplexed when I hear of fellow doctors or nurses reluctant to get the vaccine. I can understand it regarding a member of the public who perhaps does not have the scientific understanding, but frankly, I think that those doctors and nurses, if they still have doubts after seeing everything that’s happened, are probably in the wrong job.” 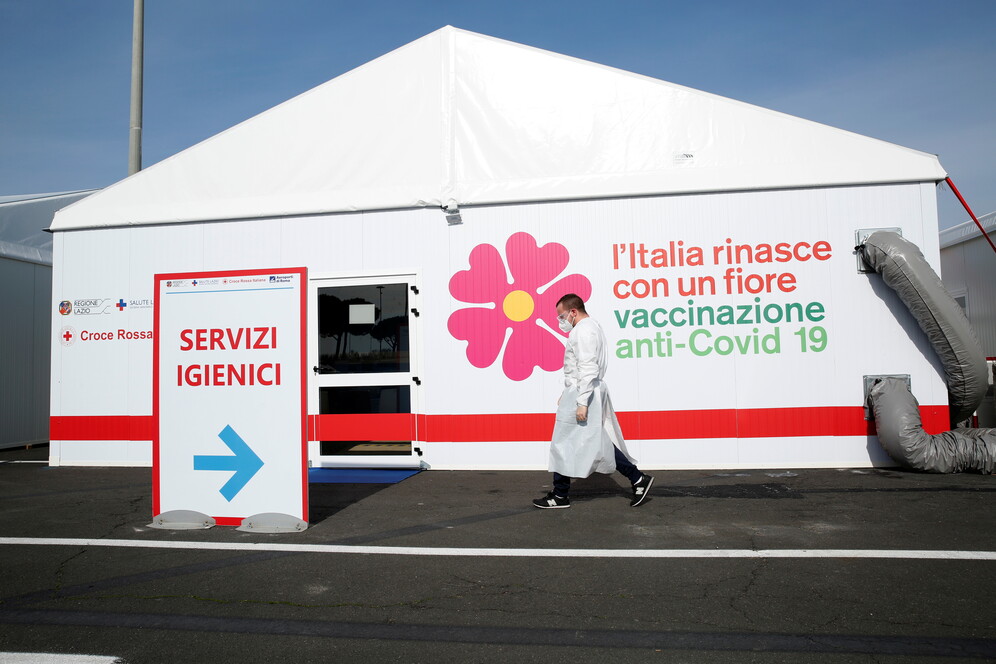 Fiumicino airport's long-term car park to be turned into vaccination centre in Italy./REUTERS by Remo Casilli

The conversation as to whether doctors are entitled to make personal healthcare choices that might bear serious impact on their patients’ wellbeing will likely become another battleground between proponents of individual rights and social responsibilities. But since the coveted herd immunity is the only hope of putting the Covid-19 devastation behind us, it’s essential that the majority of people gets vaccinated. Otherwise, the pandemic will stretch on indefinitely, with outbreak following one after another. As the vaccines are being administered daily to thousands of people around the world without many reports of serious side effects, the overall willingness to receive one is slowly increasing. If the trend towards a growing approval is true for the general public, it should hopefully be true for healthcare workers as well. In the meantime, should you ask your doctor about the merits of Covid-19 vaccine, their answer might surprise you.