Floods after Pestilence: Will the Three Gorges Dam protect Wuhan from major flooding?
Not just another paedophilia scandal: Why German political parties experimented with vulnerable kids

Cancellations, unemployment and obscure future: Hollywood in the time of Corona

The toll the coronavirus has taken on the entertainment industry is nothing compared to the way it threatens human life and the devastation it causes to every aspect of the world’s economy. Yet the repercussions are significant, and they will affect and reshape the industry in the years to come. Consequences vary from cancelled festivals and empty movie theatres to disrupted shooting schedules and mass unemployment. How is the movie industry going to cope with these disruptions, and will the situation regain any semblance of normal in the foreseeable future? Probably not.

The cancellation parade was headed by the SXSW festival, when on March 6, Austin, Texas, declared a state of disaster and shut down all public events and gatherings, which included the famous annual music, film, TV, and technology festival. This announcement came after several major companies, like Netflix, Apple, Amazon, Facebook, Twitter, TikTok, and others, refused to participate. San Diego’s Comic-Con 2020 suffered the same fate: the coveted annual event was moved to July 2021. The Emerald City Comic Con was lucky to escape full cancellation and was rescheduled for mid-August. Coachella was initially delayed till October but was later cancelled on the orders of the public health officer of Riverside County, California. And this might not be the final draft of the schedule.

Since we can't hang out together at WSCC in August, we've been working hard finding ways to celebrate #ECCC with our incredible con family online. Join us Aug 13-16 in the #Metaverse, where you'll be able to support the amazing creators & exhibitors, discover new releases & pic.twitter.com/whud9zrGkh

The 2020 Cannes Film Festival issued an initial statement on February 28 after the first case of coronavirus in nearby Nice that the event would be delayed. Ultimately, the organisers decided not to challenge fate and cancelled the festival altogether this year.

Warner Bros. made significant changes to its slate as it moved the release of The Batman, starring Robert Pattinson, from June, 2021, to October, 2021. The Many Saints of Newark, a prequel to The Sopranos, got pushed from September, 2020, to March, 2021. Also, a biopic about Venus and Serena Williams’ father was pushed back a whole year to November, 2021. Wonder Woman 1984 was delayed twice, ultimately landing on early October.

Disney also shuffled its releases big time, as the live-action Mulan film was delayed indefinitely, as well as Wes Anderson’s new film, The French Dispatch. The three-piece series in the Star Wars franchise are now scheduled for 2023, 2025, and 2027, while the premiere of James Cameron’s sequel to Avatar is pegged for December 2022. A poster of the Walt Disney Studios' "Mulan" movie, which was going to be released on March 27, towers over an empty Hollywood Boulevard /REUTERS by Lucy Nicholson

American TV shows like Saturday Night Live, Jeopardy!, and Wheel of Fortune resort to airing remotely produced content or film without an audience.

In the meantime, movie theatres are trying to come back to life after being closed during the lockdown. Audiences are being reduced at each screening to observe the social distance and the venues are being heavily disinfecting between shows.

What’s with the Economy

Although the lockdown took a toll all over the world but in Los Angeles, always filled with a bustling crowd of tourists, living off entertainment and festivities, the quarantine landscape indeed looked particularly eerie. The iconic Hollywood Boulevard stayed post-apocalyptically deserted, with the Grauman’s Chinese Theatre and other venues closed. The Hollywood Walk of Fame, usually packed with tourists, is seen empty in front of Grauman's Chinese Theater on Hollywood Boulevard/ REUTERS by Lucy Nicholson

While the overall unemployment level in the US is about 11.1%, it surges up to 20.5% in the Hollywood Boulevard area. For the record, this number was as low as 4% when this horror film year started.

According to estimates by the Hollywood Chamber of Commerce, the entertainment industry employs 650,000, with a total yearly paycheck of $58.8 billion.

In the past five months, over 150,000 people have lost their jobs. We are talking about the top filmmaking jobs, but people who are essential onset, so in a situation of moving everything online were rendered obsolete. This includes catering, logistics and other services. Employees laid-off are having panic attacks, resorting to antidepressants, and seeking psychological help, and some are experiencing psychosomatic symptoms. To make matters worse, losing their jobs has also meant they’ve lost their health insurance. The $1,200 promised by President Trump will hardly cover the expenses when rents are often higher than $1,800 per month.

The UCLA forecasts California’s economic growth curve will look like the Nike logo, as it will plummet by 42% this quarter only to recover to its 2019 level in 2023.

A lot of shoots have been postponed, although many are slowly returning to production with unprecedented safety measures. There is talk of how to reduce the number of cast and crew by any means possible. For example, the Avengers production employs over 4,000 people. The necessity of each is meticulously audited, from shooting an extra kiss to an extra snack for a gaffer. 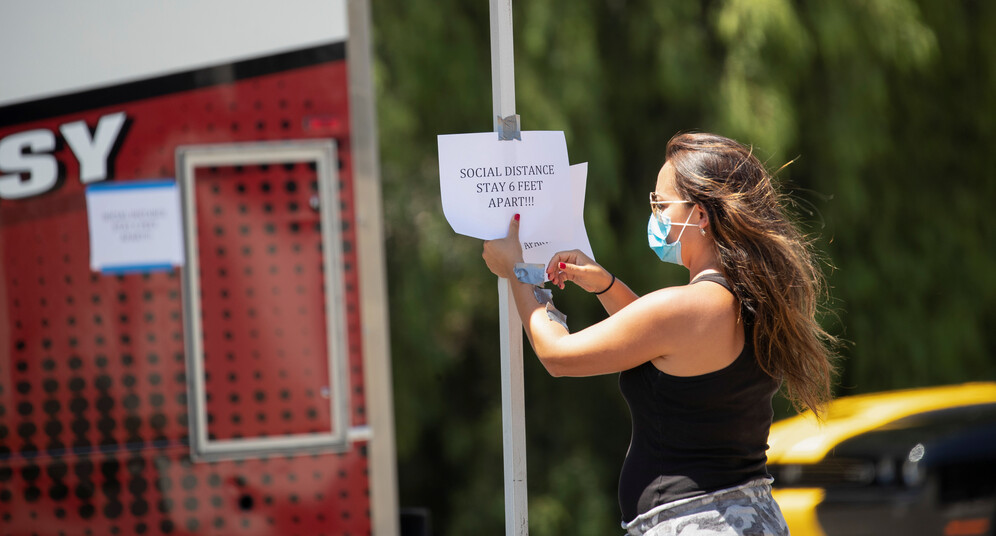 Another point to reconsider is the location — many productions are moving to other countries for cheaper and safer conditions. Another solution is a "quarantine bubble": producer Tyler Perry issued a lengthy document explaining how his Atalanta studio located on the site of the former Fort McPherson army facility would function amid coronavirus. The premises are equipped with all the essentials — sets, recording studios, lodging, and the access will be granted striclty after all the required tesing procedures.

Coronavirus is a great leveller and stars have succumbed too. The industry lost several well-known names to the disease, while others have successfully fought the virus. Among those who tested positive and recovered were Hollywood actor Tom Hanks and his wife, actress Rita Wilson, Bond actress Olga Kurylenko, British actor Idris Elba, the singer Pink, and The Politician’s Zoe Deutch.

To alleviate the disappointments of endless delays and cancellations, actors got creative looking for ways to connect to the audience. They kept in touch with their fans via zoom, singing and sharing stories from the comfort of their own homes in sweatshirts and PJs; it gave a warm fuzzy feeling of togetherness and sweetened the bitter coronavirus pills. John Krasinski started his own YouTube #somegoodnews channel during the pandemic. He orchestrated the remake of the iconic The Office dance performed by the cast online to congratulate newly wedded couples. Actor Josh Gad gathered all The Lord of the Rings crew bringing nostalgic tears to trilogy fans. On the other end, The Good Fight crew released a charming and heartfelt video to apologise for the delay in the shooting due to the pandemic. They explained the complexity of the shooting logistics spiced up by a sincere rendition of “You are my sunshine.”