“Master, please brand me”: The Story of the NXVIM Sex Cult that Trapped Billionaires and Hollywood Actresses in Sexual Slavery

In October 2020, Keith Raniere, leader of the American NXIVM sex cult, was sentenced to 120 years in prison. Together with his associates, Raniere promised a path to personal success, seducing wealthy heiresses and Hollywood stars and coercing them into donating millions of dollars to his self-improvement group. But beneath the surface, Keith Raniere created a brutal organisation that abused its members, turning many of them into sex slaves.

In 2017 The New York Times published revelations from ex-members of NXVIM (pronounced as “Nexium”). The article triggered a massive investigation by the US Department of Justice, which uncovered a criminal scheme that drew wealthy women inside the organisation and turned them into sex slaves under the guise of self-improvement courses. The cult operated for almost twenty years and recruited dozens of well-off heiresses, Hollywood actresses, and CEOs seeking personal development.
Keith Raniere founded NXVIM in the late 1990s as a self-improvement group based in Albany, New York. The group was co-founded by Nancy Saltzman, a professional nurse and a self-proclaimed hypnotist.

Raniere’s organisation offered a Leadership Success Program for wealthy people. The scheme aimed to re-program people’s thinking and taught them “to feel more joy in life”. The curriculum consisted of 12 points read out loud before each session after the students had signed a nondisclosure agreement. “There are no absolute sacrifices, so I will not become a victim”, one of the points said. 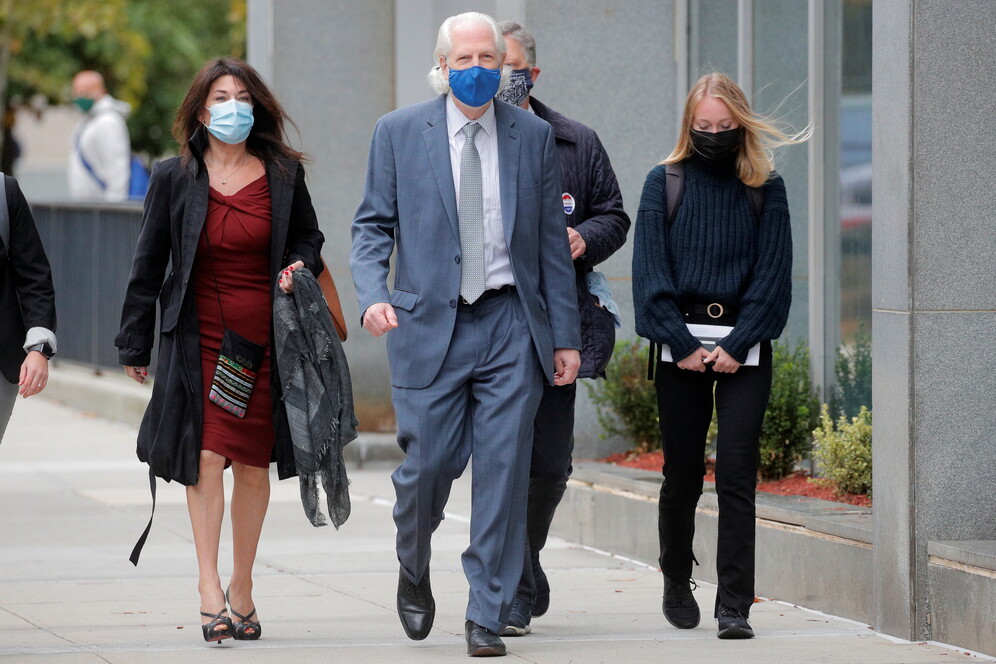 Toni Natalie, and India Oxenberg, arrive with their attorneys for the sentencing of NXIVM cult leader Keith Raniere./REUTERS by Brendan McDermid

The long 17-hour training days left LSP students exhausted and alienated them from their real lives. In class, they followed rituals like wearing coloured belts that identified their rank in the NXVIM world and getting up to greet higher-ranking group members. Keith Raniere, the “master”, as his followers called him, was to be greeted with a kiss on the lips.

The group members believed Raniere to be a genius, god-like scientist. Some of the former members said they managed to overcome phobias and anxiety thanks to Raniere’s methods. Some even believed to have recovered from conditions like OCD (obsessive-compulsive disorder) and Tourette’s syndrome. Meanwhile, John Hockman, a forensic psychiatrist, described the approach employed by Raniere and his associates as a form of mind control “designed to psychologically bring down their subjects”.

Though Raniere’s followers claimed him to be a genius with one of the highest IQ scores in the world, according to prosecutors, he graduated with a 2.26 GPD from Rensselaer Polytechnic Institute in Troy, New York. 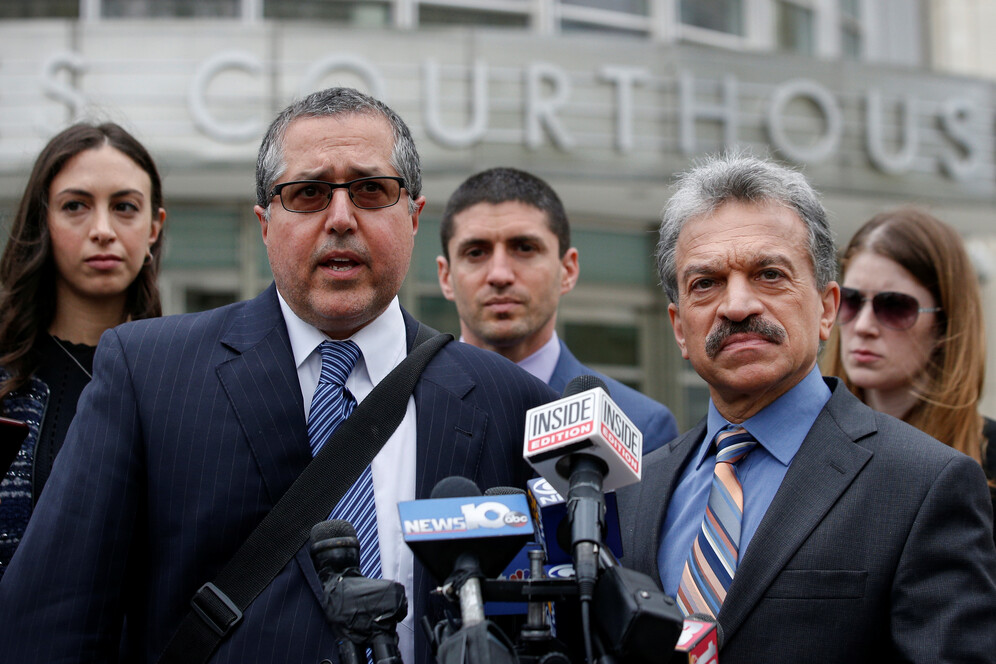 Between 1998 and 2018, more than 16,000 people completed leadership programs in NXVIM centres around the United States, Canada, and Mexico. Though most students had enough after attending some self-improvement workshops and intensives, some went further to become NXVIM permanent members and, by doing so, committed to remaining in Raniere’s sexual slavery.

The programs were costly. The price of the first course was $2,700. One couple estimated they spent $300,000 on Raniere’s classes and had to declare bankruptcy.

From riches to slaves

The Leadership Success Program was just the first step into the NXVIM world. Those who decided to remain in the organisation after completing the program were embedded in the complex cult hierarchy. One of the main pillars of the cult was a privileged, highly secret female society — Dominus Obsequious Sororium (DOS). The name contains a Latin phrase that roughly translates as “master over obedient companions”.

Mr Raniere was essentially on top of the DOS pyramid. He recruited eight first-line masters, who were considered his slaves and played first fiddle in the group’s daily routine. Among those eight were Ms Salzman, the group’s co-founder, Allison Mack, the Smallville star, Sarah and Clara Bronfman, the heiresses to the multibillion-dollar Seagram whisky fortune. The masters recruited their slaves, and those, in turn, recruited others. Overall, there were four levels of slaves, each accountable to the master above them, and all were in ultimate submission to Keith Raniere. 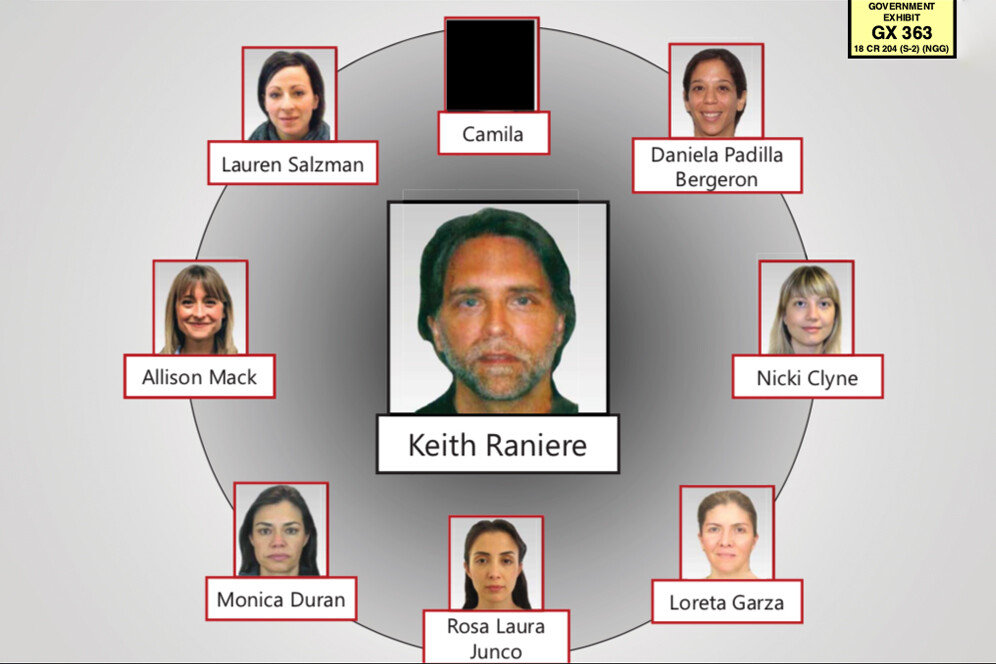 New members had to pass five stages, starting with a “prospect”, to become a first-level master. Upon joining the cult, they were required to submit compromising photos as collateral to prove their loyalty. Moving up the DOS hierarchical ladder, they provided more embarrassing material to become “fully collateralised”. The fear of being blackmailed kept the “fully collateralised” members in the group, often in conflict with their aspirations.

HBO has recently released a nine-part documentary, The Oath, telling the story of NXIVM from its rise to the ultimate collapse of the scheme. It features revelatory interviews with many former high-ranking members of the NXIVM “inner circle” — the DOS.

At the initiation ceremony, DOS members were branded with a cauterising pen. The symbol was scorched on women’s pelvises and featured Raniere’s initials
Lauren Salzman, a former member of the cult, testified in court that during the ceremony, she was made to kneel and say: “Master, please brand me, it would be an honour, an honour I want to wear for the rest of my life.” 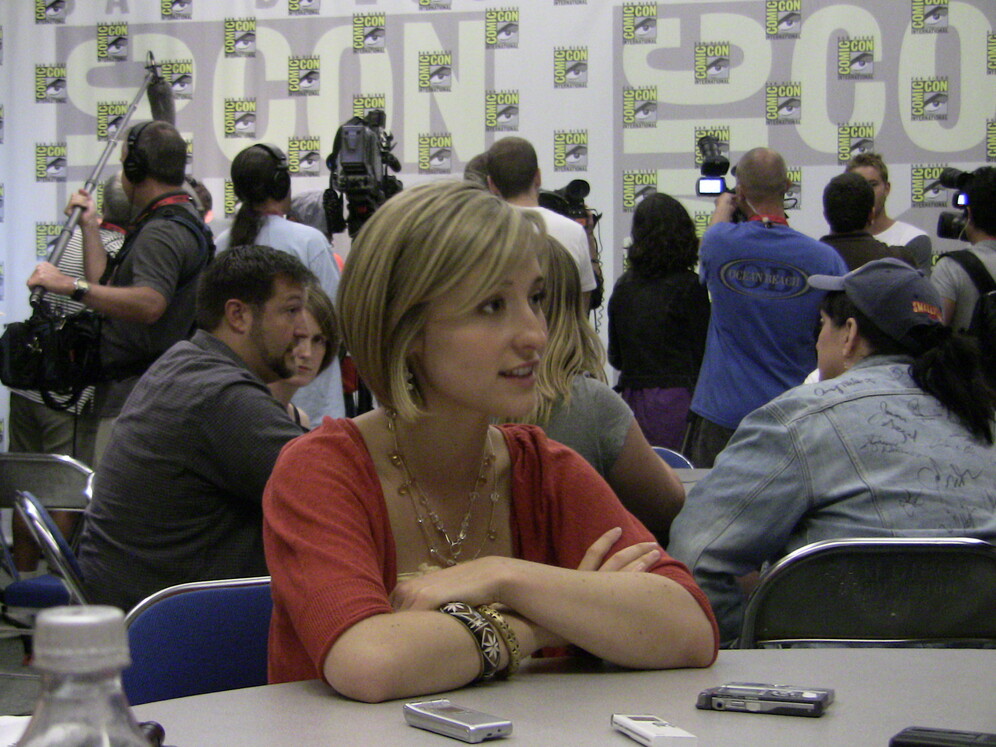 Allison Mack at ComicCon in 2009./By Kristin Dos Santos via Wikimedia Commons

The ritual was elaborated by the “master” and a handful of his privileged followers. “Do you think the person who is being branded should be completely nude and sort of held to the table like a sort of, almost, like a sacrifice?” Mr Raniere asks Allison Mack in a recording submitted to a Brooklyn court as evidence against Raniere. The man then goes on to share his vision on how a woman’s body should be arranged during the initiation ceremony: “legs spread straight, like feet being held to the side of the table, hands probably above the head, being held almost like tied down.”

According to Lauren Salzman, after the initiation, the women had to be in total submission to their “master”, that is — to Keith Raniere. In case of minor disobedience, they were subjected to cruel punishments that included being forced to stand barefoot in the snow, take freezing showers, and whipping each other with a strap. Ms Salzman recalled that Mr Raniere once called during the “bare butt” beating punishment to tell his subjects to ensure that they whipped their wrists in a particular manner to inflict maximum pain.

She also says Keith Raniere subjected his followers to “readiness drills”: he would text them at unexpected moments, demanding an immediate response. If a woman didn’t text him back in 60 seconds, she would suffer sadistic punishment. The ultimate aim of the drills was to impose on the subject the idea that responding to a master was one of the most critical tasks for a slave. 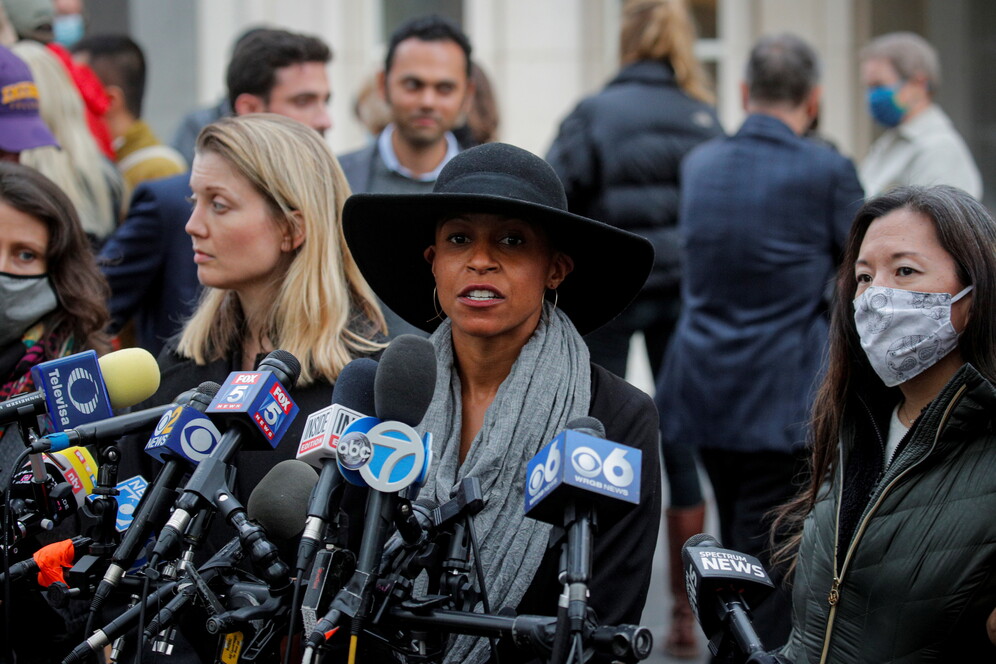 “The best slave derives the highest pleasure from being her master’s ultimate tool,” a passage of Raniere’s “master book” reads. “You surrender your life, mind, body for unconditional use.” Other excerpts, presented to the Brooklyn court, call on the readers to “contemplate why your master is better than all other people.”

One of Raniere’s subjects, Rosa Laura Junco, bought a “sorority house” for the first-line masters near Albany, New York. The first-liners would live there together for long periods, hold frequent meetings, and take nude group pictures for Mr Raniere.
Laura Salzman says they planned to build a “dungeon” in the sorority house. The room would have featured a cage where those willing to give up personal development might be kept “for hours or days or longer”.

Sexual abuse under the guise of empowering women

It isn’t easy to pinpoint what attracted women to join Raniere’s organisation. Some attribute part of the “grand master’s” success to his female empowerment rhetoric, which was convincing enough to conceal the misogyny inherent in his teachings. “His thing was always that the company would be better if there were women in power because women are stronger, women are this, women are that,” Natalie, Keith Raniere’s former girlfriend, says.

Underneath the enthusiastic rhetoric of female empowerment and success, the NXVIM leader had some pretty strange theories about gender. “One thing that was [taught] was that men biologically, by their nature, are primitive. They want to propagate. They want to create more children to create a tribe,” recalls Barbara Bouchey, another of Raniere’s ex-girlfriends and a former high-ranking NXIVM member. “So men and their biological chemistry were prone to want to have multiple partners, whereas women based on their biological nature were at home in the cave caring for people.” 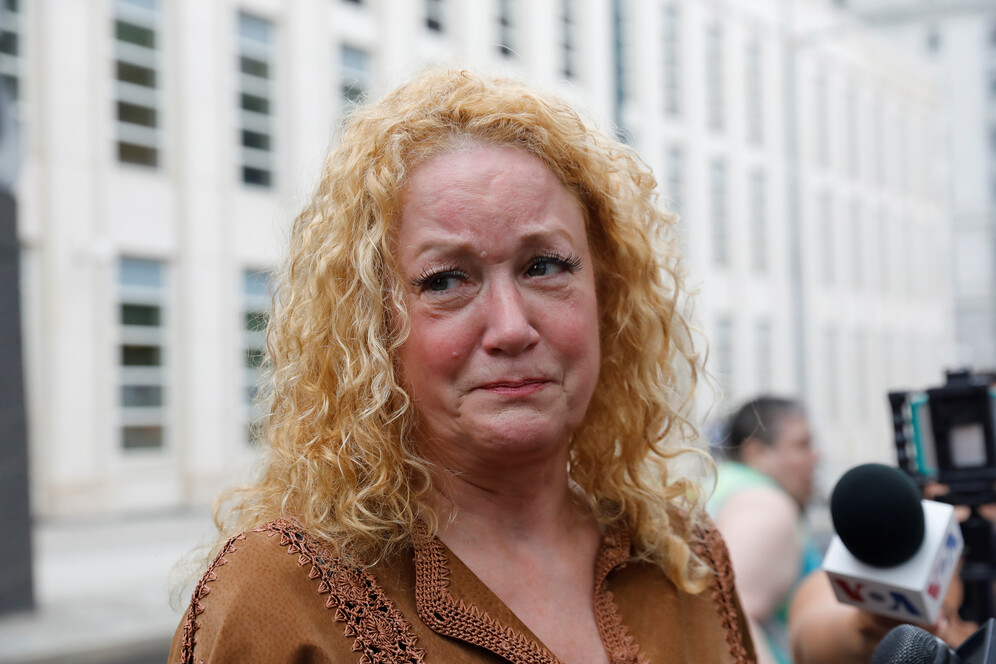 Barbara Bouchey, one of Raniere’s ex-girlfriends and a former high-ranking NXIVM member./REUTERS by Shannon Stapleton.

Decades after the cult was created, its female members started to come to their senses. In 2017, Sarah Edmondson, an actress and a dedicated NXIVM member for ten years, filed a complaint with the New York State Department of Health after her DOS initiation ceremony. The complaint put Keith Raniere and his followers in the media spotlight, which finally pushed many NXVIM members to leave the organisation and file lawsuits. Raniere fled to Mexico. However, in February 2018, a federal court issued a warrant for his arrest. Mexican authorities arrested Raniere in March and deported him back to New York.

In October 2020, Mr Raniere, 60, was charged with sex trafficking and other crimes and sentenced to 120 years in prison. He was also ordered to pay a $1.75 million fine.
Several other notable NXIVM figures, such as Alison Mack and Clare Bronfman, had earlier been charged with several crimes like identity theft, extortion, money laundering, online fraud, forced labour, and sex trafficking. But, unlike their “master”, the women pleaded guilty.

The judge announced Raniere’s verdict upon hearing hours of heartrending testimony from 15 victims, many of whom described how Keith Raniere traumatised and brainwashed them with his pseudoscientific approaches.

One of the first to speak was a young woman named Camila, who had a 12-year relationship with the “grand master” and came through all the humiliations of NXVIM membership. In a trembling voice, Camila recalled that Raniere first sexually abused her when she was 15 and he was 45. After that, he expected the girl to be available for sex at all times. She was ordered to weigh less than 100 pounds and forced to get an abortion. Camila said she even attempted suicide once. And she was one in the long list of Raniere’s victims.

Clare Bronfman, an heiress of the Seagram's liquor empire, following her arraignment on charges of racketeering inside Nxivm. /REUTERS by Brendan McDermid

In his statement before the court, Mr Raniere, wearing a prisoner’s robe, maintained his innocence and insisted the women were lying. He then said he was “deeply sorry” and didn’t intend to cause so much suffering and outrage. “Where I am is caused by me,” Mr Raniere hummed. “This is all my doing.”

“It’s an insult to the intelligence of anyone who listens,” the judge said after hearing the defendant’s speech.

Despite the abundant evidence of Mr Raniere’s wrongdoings and the slashing verdict, to this day, the “grand master” has many supporters who insist that all the NXVM activities were among consenting adults. Dozens of Raniere’s subjects overwhelmed the court with letters calling for leniency, which, to their bitter disappointment, was not an option for the judge.