Wallflower Society, Conservative Gender Roles and No More One-Night Stands: What will social life post-corona look like?
How a Soviet woman bought a tank and avenged the death of her husband during WWII

“Leftugees” flooding the red states: the liberal exodus of America

Being a mobile nation, America isn’t afraid of moving. Since the pioneer days, packing one’s belongings and leaving for parts unknown has been in America’s DNA, and still is. Leaving for college, accepting a job offer across the country, retiring to a better climate or to be closer to family — just a few of many reasons Americans move between cities and states. However, a new trend has become increasingly strong in the recent years: people leave in droves from the so-called “blue” (that is, Democrat-controlled) states, such as California, Illinois and New York, and move to more conservative Texas, Arizona and Florida.

Based on the US Census Bureau domestic out-migration figures, the top five states seeing a tidal wave of departures are all blue. New York, California, Illinois, New Jersey and Michigan altogether lost 4 million people between 2010 and 2019. The main reasons people chose to leave their former homes in the rear-view mirror are the extremely high cost of living and excessive taxes, coupled with poor governance. For the most part, people are fleeing blue states simply because they can’t afford to live there anymore. 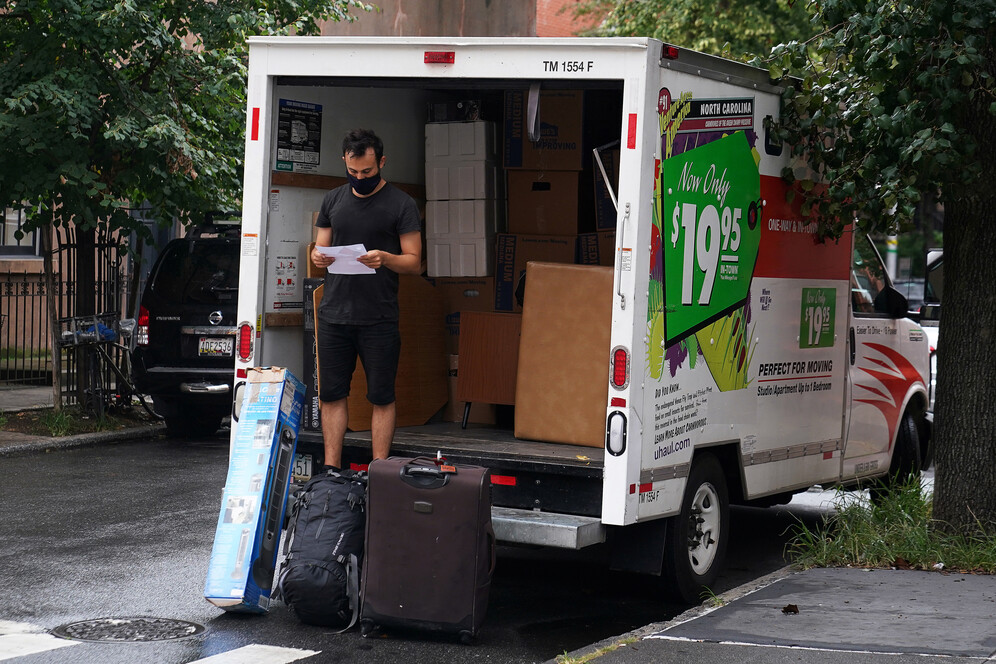 One way to tell where to they are planning to move is by monitoring their search activities. According to Redfin real estate brokerage company’s data “6.5% more Americans looked to move to red and swing counties than to blue counties in the second quarter of 2020.”

Based on the analysis of listings looked at by Americans, Bay Area and Los Angeles residents are mostly eyeing Phoenix, Arizona and Las Vegas, Nevada, while New Yorkers strongly consider Florida.

Although this data doesn’t translate into actual migration patterns, it demonstrates people’s desires and intentions. Another interesting source of migration statistics is provided by U-Haul — a US truck and trailer rental company, used by millions of Americans moving house. According to its 2019 migration index (the one-way truck traffic trend), the top states Americans are moving to are Florida, Texas, North Carolina, South Carolina and Washington, which, incidentally, have the lightest tax burdens. The top five states people Americans were fleeing last year were New York, California, Illinois, New Jersey and Michigan — all of which voted blue in the past election.

A 2018 Wall Street Journal editorial titled ‘So Long, California. Sayonara, New York’ predicted, “In the years to come, millions of people, thousands of businesses, and tens of billions of dollars of net income will flee high-tax blue states for low-tax red states.”

The reason was a new tax bill which capped the federal deduction for state and local taxes effectively raising the income tax for affluent Californians and New Yorkers by a whopping 50%. Given that some states, such as Florida, Nevada, Texas and Washington, impose no tax at all on earned income, the imbalance becomes quite grotesque. Plus, weird as it may sound, the dollar isn’t worth the same across the nation, with its purchasing power considerably lower in the blue states. Just compare: while $1 is worth only $0.87 in California and New Jersey, and $0.86 in New York, in red states it will stretch much farther, being worth $1.17 in Arkansas and $1.16 in Mississippi and Alabama.

House prices in Los Angeles, San Diego, and San Francisco have increased by 70 percent, 80 percent, and 116 percent over the last decade respectively, making San Francisco the most expensive city in the US for home buyers./Via Pxfuel

Real estate prices are another factor driving people out of blue states. California’s biggest metropolitan areas have been bleeding people since the end of the Great Recession of 2008. California is a great place to live when you’re young and single and spend more time at the beach than in a rental apartment you share with several roommates. Once you start earning and paying taxes in California, once you get married and decide to have kids there, sooner or later, you begin to entertain the thought of leaving the Golden State for a more family-friendly place. That’s why San Francisco has the lowest percentage of children under 18 of any major city in the US. New York is also getting older as young families leave the city in droves, moving out into the suburbs or out of state.

The rental disparity is also quite telling, given that a one-bedroom apartment in New York City averages $2,600, while in Houston or Dallas it’s around $800.

Property taxes are another painful issue. New York Congresswoman Alexandria Ocasio-Cortez’s mother was forced to move to Eustis, Florida on account of it. “I was paying $10,000 a year in real estate taxes up north. I’m paying $600 a year in Florida. It’s stress-free down here,” she told the New York Post.

Former residents of otherwise beautiful California are also citing the quality of life issues as their reason to move. In recent years it’s been further aggravated by wildfires raging across the state threatening homes and lives in half the state (тут можно поставить ссылку на мой материал про California wildfires). Caused by failed forest management, it is a particular case of the overall decline in government services. The fact that California is presently home to nearly half of the US’s homeless people, and, due to this, its metropolitan areas are facing — for lack of a better way to put it — a severe poop crisis doesn’t bode well for its image either. San Francisco boasts the highest property crime rate of any big city in America, and city residents don’t even bat an eye at broken car windows anymore. 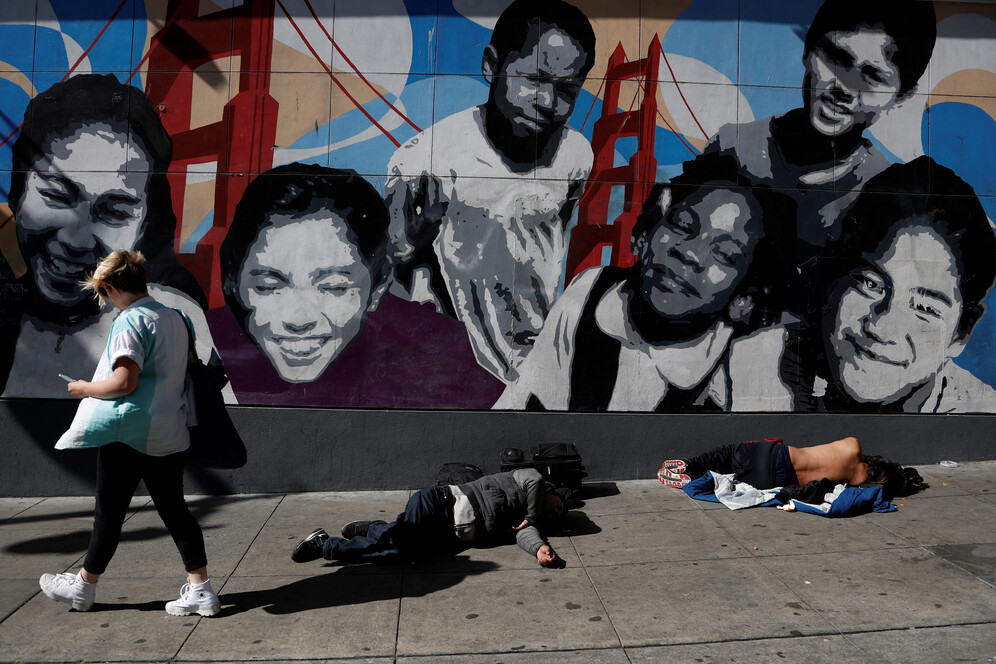 A woman walks past men passed out on the sidewalk in San Francisco./REUTERS by Shannon Stapleton

As the coronavirus has drastically changed the American social climate, the response to the crisis across the states has differed a great deal. Liberal Democrats who tend to put government ahead of business and the rights of individual workers favoured massive lockdowns that hurt blue-collar workers the most. The states of New York, New Jersey, Michigan, Pennsylvania, Illinois, California and Oregon, all of which have Democratic governors, were the slowest to reopen leaving millions of workers without paychecks. As for employers, coronavirus forced many of them to leave because they cannot deal with high taxes and fees. The current $15 an hour minimum wage, high workmen’s compensation insurance rates, oppressive building and environmental regulations drive businesses out of state. In California, the minimum wage will go up to $14 an hour starting January 1, 2021, too. These changes were passed well before anyone could predict the current COVID pandemic-induced 15% unemployment rate. But businesses do what they need to survive, and for many moving away is the only viable solution.

Another way coronavirus contributed to people’s decision to move is the “work-from-home” paradigm shift.

A recent poll indicates up to 42% of San Francisco Bay Area tech workers and about 40% in New York would leave the region if they could continue working remotely indefinitely. So it’s not only the cost of living that’s forcing people out of metropolitan areas but the newly-found appreciation for tree-filled backyards, and safe and clean streets. According to the Wall Street Journal, the number of “newly signed contracts in Manhattan decreased 31% year over year for August”, and rental prices in formerly desirable neighbourhoods plummeted. The Big Apple’s apartment vacancy rate has hit a 14-year high and increased by 50 percent in San Francisco. 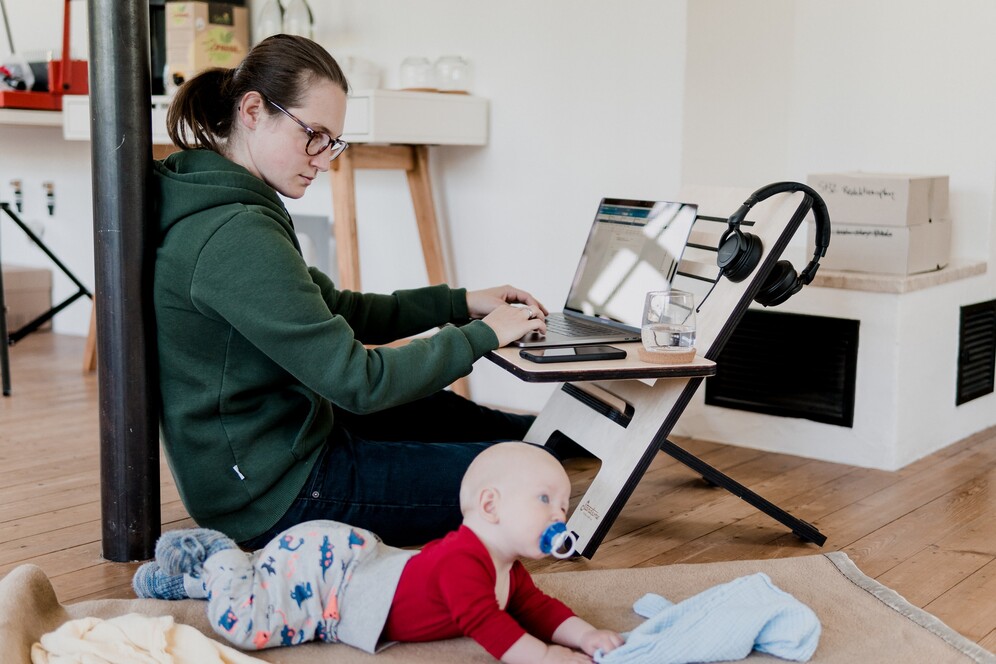 Up to 42% of San Francisco Bay Area tech workers and about 40% in New York would leave the region if they could continue working remotely indefinitely./Standsome Worklifestyle via Unsplash

Liberal policies that go hand-in-hand with high taxes place greater value on social justice, ensuring access to healthcare, regulating economic activity, and social equality. Lovely as they may sound, these priorities incidentally result in the influx of immigrants, rising crime rates, inferior public schools, and, as the events of the past summer demonstrated, riots accompanied by looting, arson and property damage. It’s painfully apparent that despite very high tax rates, tax revenues never keep up with spending schemes of the liberal politicians. As a result, deficits get larger and larger.

Nowadays, California has the highest poverty rate in the US. When it comes to crime rates, the demarcation line runs somewhat between urban and rural communities, than Democrat and GOP-run states.

However, out of the 10 US largest metropolitan cities eight are currently run by Democrat mayors, the other two are led by an Independent and a Republican. So, perhaps, big-city crime, political leadership and civil unrest shouldn’t be all lumped together. Still, in the current situation, some politicians are tempted to paint the problem in too broad a brushstroke.

The blue-state exodus isn’t a new demographic phenomenon. Still, in the aftermath of the recent Presidential elections won by Democrats, the fact that a significant number of Americans leave Democratic states disenchanted by liberal politicians and their policies has more significant implications. The political and ideological division the Atlantic magazine called “A Cold War between Red and Blue America” is fraught with consequences for both parties. Sociologists are keenly discussing if the move, by and large, should make new transplants change their political affiliations, or they’d tend to drag their left-wing philosophy with them, turning their new homes bluer than they used to be. Logically, the disenchantment that made them hit the road should make them embrace the conservative values of their new home states. But surprisingly, based on recent data, the opposite is a more real possibility: Arizona’s turning blue is, among other things, blamed on Californians who moved there. Republican Texas is now getting somewhat purple, thanks to migrants from blue states. At the same time, the cumulative inflow of more than 100,000 people from California, New York and Illinois between 2010 and 2016 turned Colorado from red to purple to a moderate shade of blue. 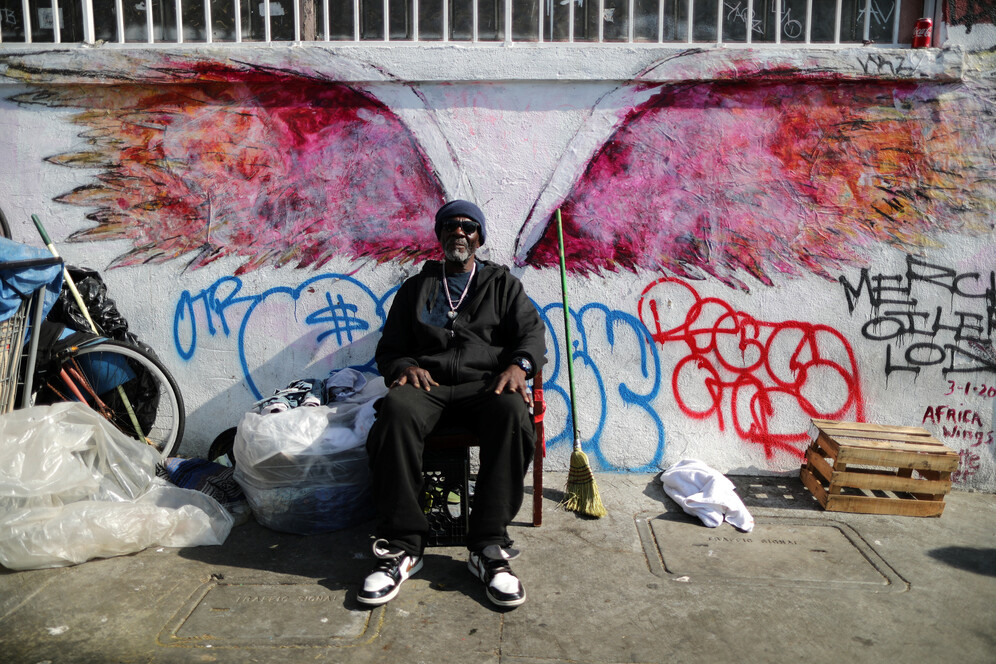 A man sits next to his tent on Skid Row in Los Angeles, California./REUTERS by Lucy Nicholson

Migration between states may not sound as vital and rife with as many implications as international migration. Still, for the US states population losses or gains also mean reappointment of congressional seats, since a state’s number of representatives in Congress changes along with its demographics. In the last days of 2019, the US Census Bureau released information about population changes in all 50 states plus DC, which, together with the results of the 2020 Census would factor into the eventual seat allocation during the 2022 elections, but the trend is already evident.

The two largest Democrat-dominated states (California and New York) have both suffered population losses that will likely reduce their representation, while Texas led by a Republican leadership will probably gain as many as three House seats.

For California that has never lost a congressional seat, it’s quite a blow. For New York, that’s been bleeding people for years; it’s more of a projected outcome. Even though “leftugees” might be bringing their political baggage along, the blue exodus will likely bolster conservatives at least at some levels of governance, contrary to their wishes.