TB activist on strict anti-coronavirus measures: “It's annoying! Every year, we have one million, one and a half million dying. Don't you care at all?”
Post-virus future: 4 trends that will shape the global economy

Yet another grim surprise from 2020 — giant hornets. Vespa Mandarinia has a cartoon-like scary orange face, and is native to Asia. But recently they've relocated to the Pacific Northwest and are not going to stop there. The hornet has a particular taste for honeybees and threatens to shatter the already fragile environmental balance.

Asian giant hornets were first spotted in November 2019 near the city of Blaine in Washington State. The pests known to inhabit Japan, China and South Korea, were seen in British Columbia, Canada, a month earlier.

The deathly insects dubbed in their native Japan as murder hornets are the biggest of their kind, up to 2 inches long and can travel 20 miles per hour. Their sting can pierce through almost any beekeeping suit and produce nearly seven times the amount of venom as a honeybee. They're also comfortable with stinging multiple times. In an attempt to eradicate a hornet's nest, Conrad Bérubé, a beekeeper and entomologist from the Canadian town of Nanaimo, got stung about seven times. He said the stings were "like having red-hot thumbtacks being driven into my flesh". 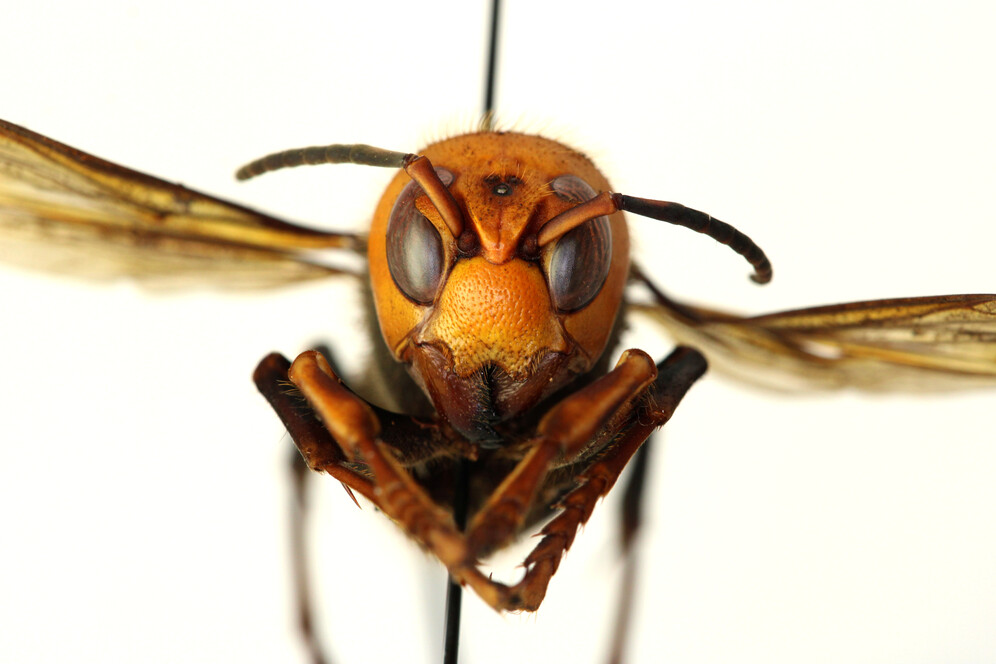 According to researchers from Washington State University, the hornet's life cycle begins in April. Queens emerge from hibernation, feed on plant sap and fruit, and look for spots underground suitable for their nests. The peak of their activity is in late summer and early fall/ Washington State Department of Agriculture via REUTERS

On average, murder hornets kill between 30 to 50 people each year. Menacing though it sounds, they only attack humans if deliberately bothered. Their primary target is the honeybee. They can easily wipe out an entire honeybee colony in a matter of hours, and with extreme brutality.

The hornet marks the bees with a unique pheromone so other hornets can spot their victims later when he brings his own colony over. Once inside a hive, the hornets decapitate the bees in no time, take over the hive preying on the bees and their larvae, and finally take off with the remaining bee carcasses to feed their own young.

Bees are trying to protect themselves from the attacks. European honeybees are new to the threat and aren't able to defeat the enemy as they can't bite through the hornet's armour. In the meantime, thousands of years of experience put their Japanese cousins at an advantage. They've developed a fantastic technique called "a hot defensive bee ball" to protect their homes from the 2-inch invader.

When a hornet breaks into a hive, up to 500 bees team up, cover the hornet's body with their own and start to vibrate. The heat from the bees' vibrating wings and the carbon dioxide they exhale kill the hornet in less than an hour.

Crunchy treat to die for

According to various sources, the hornets might have ended up in the States sneaking into one of the cargo ships travelling from Asia to Port of Seattle.

Another theory suggests the hornets were deliberately brought to the States for gastronomic purposes. Hornet venom is used for shochu, a liquor of Japan, which, by the admission of the reporter who had the courage to try it was "ashy in flavor, almost like sipping on charcoal."

Also, the insects and their larvae are fried or steamed with rice to create a popular entree hebo-gohan. Currently, over 30 restaurants in Tokyo serve giant hornets, and it seems to be a big hit.

There is even such a thing as Kushihara Hebo Matsuri, Japan's largest wasp festival that's been running for 27 years. According to the New York Times, the murder hornets' bodies are light and crunchy, and "leave a warming, tingling sensation when eaten."

What is the solution?

The hornets are causing immense damage to honeybees which are already on the brink of extinction in the US. The honeybee shortage can thwart pollination of crops heavily dependent on it, such as apples, blueberries and cherries. With the threat from giant hornets, "beekeepers may be reluctant to bring their hives here," said Island County Extension scientist Tim Lawrence. 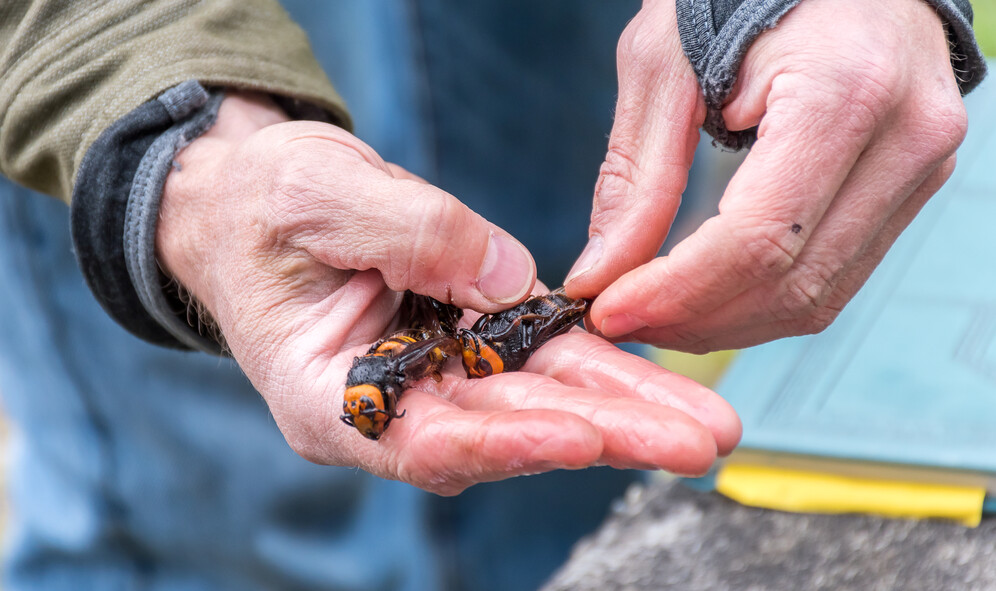 Chris Looney, an entomologist at the Washington State Department of Agriculture, is convinced that if the hornets are not stopped in the next year or two, it would be impossible to contain the spread of the predators across the United States. The Department is asking people to report if they see a hornet.

"We need to teach people how to recognise and identify this hornet while populations are small so that we can eradicate it while we still have a chance," says Todd Murray, a WSU Extension entomologist and invasive species specialist.

At the moment, Looney and other researchers are setting traps to catch emerging queens and look for any colonies if any are established during the summer. They plan on attaching a radio-transmitter to the wasps to track them back to their nests. Since the hum and all the activity inside the hornet's nest raises the temperature to 86 degrees F, the scientists use thermal imaging to explore forest floors. Another tool they are prepared to try is tracking the noise the hornet makes while flying.

The declining honeybee population has been an issue for some time as a third of the food we eat needs their pollination. Alternative solutions are being looked into.
Harvard University was the first to introduce 'RoboBees' in 2013. These tiny robots could only float in the air linked to a power source but have now evolved. They learned to swim and to latch onto the underside of flat surfaces. 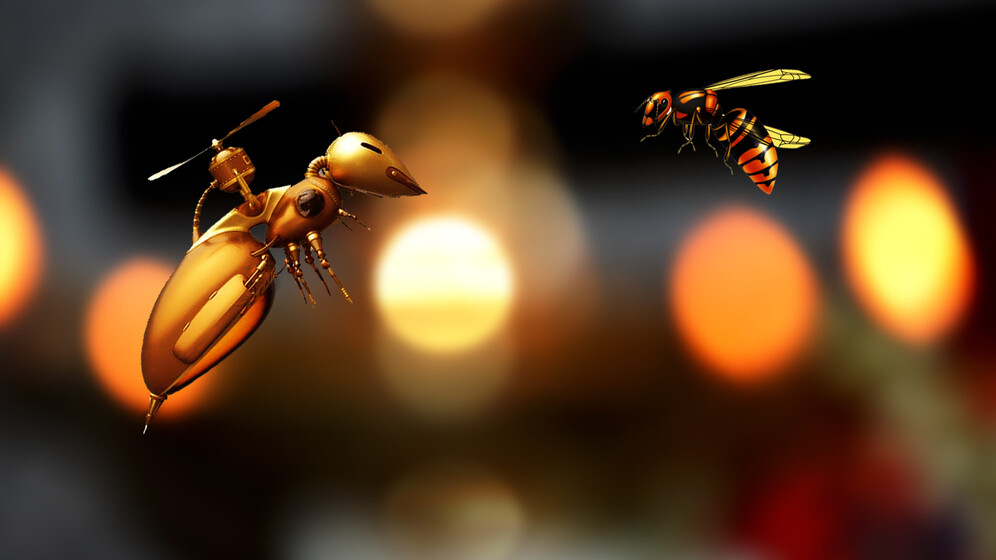 At the moment, researchers are working on perfecting a mechanism to fill the place of pollination that can't be done due to bee losses. At the Delft University of Technology in the Netherlands, a group of scientists are developing swarms of bee-like drones. According to The Guardian, "the wings of their DelFly beat 17 times per second, to generate the lift needed to stay airborne and control its flight through small adjustments in their wing motion."

Researchers at Japan's National Institute of Advanced Industrial Science and Technology are working on the principle of cross-pollination. They're making a drone to transport pollen between flowers, able to cross-pollinate Japanese lilies without damaging any parts of the flower.

All in all, RoboBees do sound promising. Let's just hope these technological advances won't lead us to the "Black Mirror" situation.