Mystery That Went Up In Flames: The Disappearance of the Sodder Kids
How ‘the father of PR’ Edward Bernays engineered consumerism in America

Douglas Emhoff: The First Second Man in the White House

Being elected the US vice president, Kamala Harris broke many barriers and became “the-first-ever-to” in more ways than one. The first woman, the first Black American and Indian-American to win the second-highest US office, she’s been shattering glass ceilings her entire life and seems to have become used to it. But when it comes to the current vice presidency, there’s yet another fascinating aspect Americans will have to embrace: that is, the first “second gentleman”. And although it’s doubtful many voters considered the “second dude” factor when casting their ballots, the charming presence of Douglas Emhoff on the scene has made many of them feel warm and fuzzy, come to think of it.

Although the recent inauguration, when Doug held the Bible for Ms Harris during her swearing-in ceremony, wasn’t the first time he appeared in the national spotlight, it still won’t be an exaggeration to say that he stole the show — along with Bernie Sander’s mittens, of course! As if that wasn’t enough, the second couple was flanked by Emhoff’s ex-wife Kerstin, who volunteered on Kamala’s presidential campaign, and their two children, who, reportedly, love their stepmom Kamala so much they call her “Momala”… Wow! Sounds a bit like a plotline from the Modern Family sitcom, doesn’t it? M. Harris has admitted to it herself: “We sometimes joke that our modern family is almost a little too functional” — ditto! 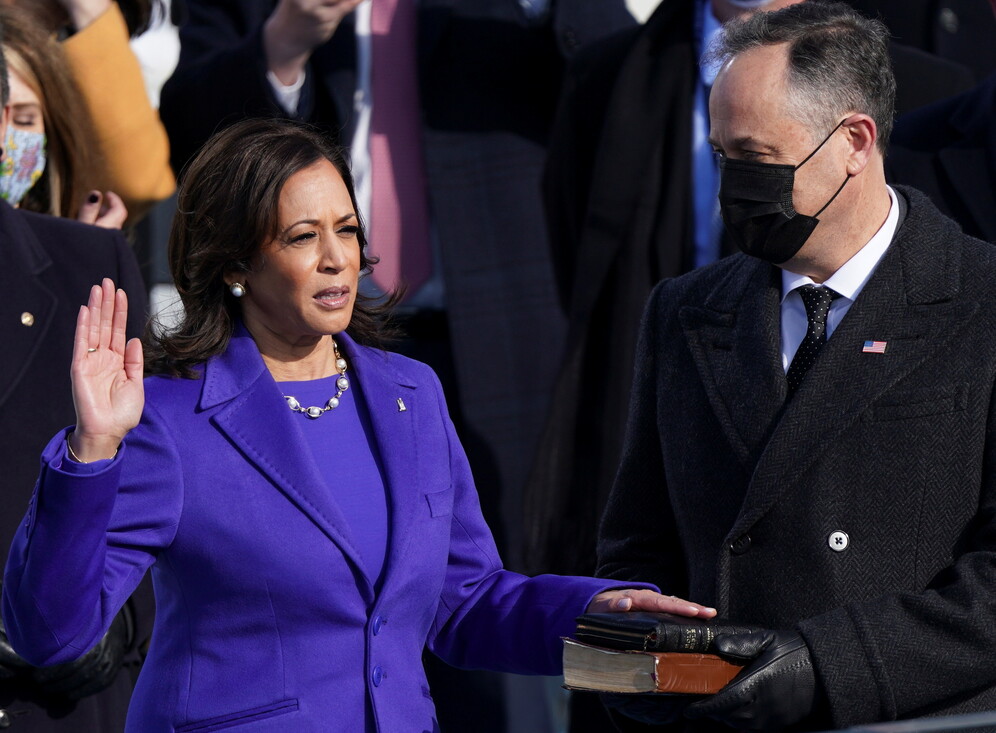 Kamala Harris is sworn in as U.S. Vice President as her spouse Doug Emhoff holds a bible during the inauguration of Joe Biden as the 46th President of the United States. /REUTERS by Kevin Lamarque

So, who are you, Mr Emhoff? An ever-supporting, loving and lovable VP’s husband Douglas Emhoff is a major entertainment lawyer. Until recently he was a partner at the DLA Piper law firm, where, according to his company profile, “represents large domestic and international corporations and some of today’s highest-profile individuals and influencers in complex business, real estate and intellectual property litigation disputes”. But it seems he’s decided to turn the page and put his legal career on the backburner: in August he took a leave of absence from his practice to support the Biden-Harris ticket full-time and isn’t coming back any time soon.

What many find incredibly refreshing is how seriously he’s taking his current position — or should we call it a job? — of his wife’s husband.

Many remember the way he entered the stage during Kamala’s campaign for the presidency. In June, Mr Emhoff caught the public eye by leaping on stage with others at a presidential forum to apprehend a protester who had grabbed the microphone out of Ms Harris’s hands. How’s that for a hands-on approach?

It has just been a few days since the inauguration, but it looks as though Douglas will be as eager to perform his role of the second gentleman as the political protocol would allow.

I am honored to be the first male spouse of an American President or Vice President. But I'll always remember generations of women have served in this role before me—often without much accolade or acknowledgment. It’s their legacy of progress I will build on as Second Gentleman.

This pro-feminist remark hints at the fact that first and second ladies abandoning their careers to become full-time political spouses — just like Mr Emhoff — has always been taken for granted, and yet it’s a noble and admirable choice.

The “Second Gentleman” is now, by the way, Emhoff’s go-by title which called for a brand-new acronym “SGOTUS” in addition to “SLOTUS” (Second Lady of the United States) that until recently has been used to denote the VP’s spouse.

This demonstrates the role used to be very gendered, as well as mostly ceremonial. Being a VP, Kamala Harris will preside over the Senate, which, in principle, leaves Mr Emhoff in charge of organising lunches and events for the senators’ spouses. Not that anyone doubts he’ll tackle the task brilliantly.

As for Presidents’ wives, they historically picked up their areas of interest or goals they worked towards while their husbands were in office. For example, Laura Bush advocated for children’s literacy, while Michelle Obama promoted exercise and healthy eating. The second ladies’ causes — or now, more fittingly, spouses — received much less attention. According to Emhoff, as a second gentleman, he plans to advocate for legal justice reform, helping people gain fair access to the legal system. It was also announced he’d be teaching law this semester at Georgetown University in Washington, DC, focusing in intellectual property, entertainment and media law. Plus, he could allot more time to golfing — a favourite pastime he, incidentally, shares with former US President Donald Trump.

With a hashtag of his own (#DougHive a play on Beyoncé fans’ #BeyHive) and dance moves to die for these days Douglas rivals his wife in popularity with over 1,2 million Twitter followers.

Harris and Emhoff have been married for six years, having tied the knot less than a year after their first blind date. For Ms Harris, it’s the first marriage and for him the second. When they met, Kamala Harris was finishing her first term as California Attorney General, which clearly shows that Emhoff is in no way intimidated by women in positions of power.

Douglas Emhoff was incredibly supportive of his wife’s political career from day one, and the 2020 presidential race wasn’t Emhoff’s first campaign alongside Kamala Harris. He took an active part in his wife’s run for Senate in 2016. He was still involved in his legal work in those days, with only weekends to spend on the campaign trail. But, according to Forbes, while Ms Harris was running, “Emhoff got rid of several stockholdings in companies that could become a conflict like Caterpillar, Dominion Resources, Monsanto and Medtronic, opting to reinvest the proceeds in mutual funds and ETFs.” He took an active part in Ms Harris’s presidential bid, but when then-California senator announced on December 3, 2019, she would end her campaign, he embraced her choice. “She made that decision, and I would have supported whatever she decided,” Emhoff said in an interview. “But I’m not her political adviser. I’m her husband. And so my role was to be there for her, to love her, to have her back, to talk it through, to help her.” 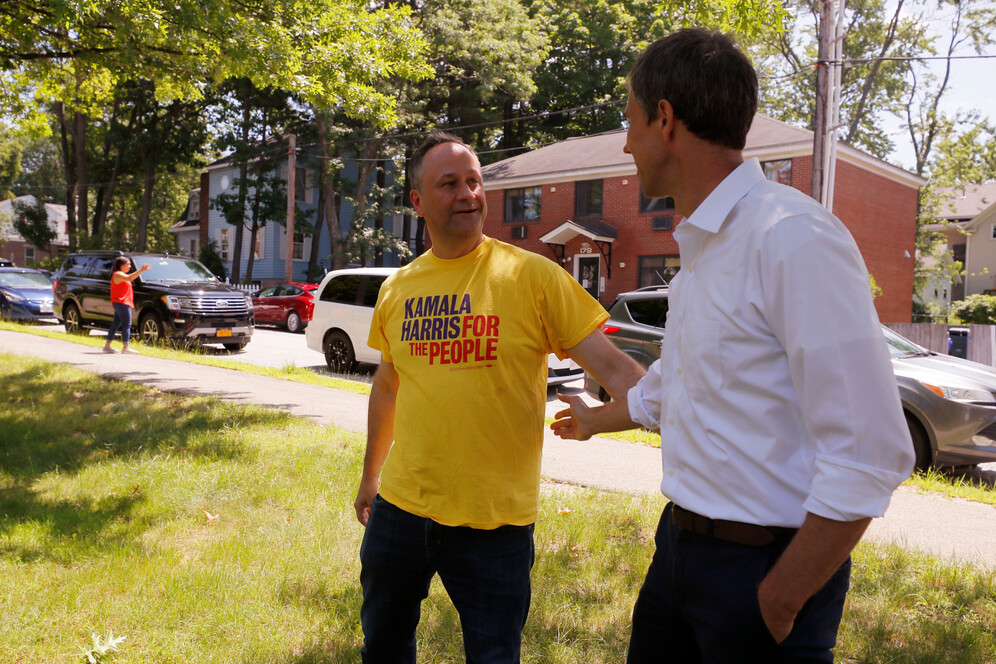 Harris and Emhoff have their law degrees in common, are both 56 years old, but come from staggeringly different backgrounds. Born in Brooklyn into a Jewish family, Emhoff graduated from the University of Southern California’s Gould School of Law, where he met his first wife. They were married for 16 years and had two children, Cole and Ella. On the other hand, Harris was born in Oakland, California, and is a daughter of an Indian immigrant mother and a Jamaican father, both of whom pursued their doctorate degrees at Berkeley and were passionately involved in the 1960’s civil rights movement. Coming from a mixed background, she identifies herself as Baptist but also embraces her Hindu heritage.

When Emhoff and Harris got married, they honoured each other’s cultural backgrounds: following a tradition common in Indian weddings, Kamala placed a flower garland around Douglas’s neck, and then at the end of the service, she and her new husband broke a glass to mark Emhoff’s Jewish heritage.

With that said, Emhoff is the first Jewish presidential or vice-presidential spouse in US history.

A forceful advocate for his wife, Emhoff has also provided a comfortable financial backing for their union. Despite Harris’ high political positions, she never earned as much as her lawyer husband. Since Harris joined the Senate, which obliged her to reveal her tax returns, the couple’s joined income has been more than $7 million, building up a fortune that Forbes estimated at $6 million last year.

Emhoff’s sidelining his successful career to aid his wife’s is a projection of an ideal world many women would want to live in one day. Europeans have long had woman political leaders and are finding the fuss and media attention attached to Mr Emhoff revealing of American society’s backwardness in certain aspects. But, come to think of it, when Kamala Harris was a little girl, she was bussed to school that had been desegregated only two years prior. Thus, Emhoff and Ms Harris represent the first generation of Americans who could make this kind of scenario a reality.

Hopefully, the American public’s eagerness to embrace Douglas Emhoff in his new position will be of service to the generations of men and women to come. It could become a step towards real equality for political spouses and men and women from all walks of life.