High time: America’s emerging leniency toward illegal drugs
Recently, the WHO updated its recommendations for a healthy lifestyle. Now it also includes advice for pregnant women and people with different disabilities. Here’s what you need to know.

Inside The Family: How the leader of a 1960s doomsday cult abused children to create a new race

In the 1960s, glamorous yoga teacher Anne Hamilton-Byrne gathered a group of devout followers around her and convinced them she was Jesus Christ reborn. Initially supported by the bored, wealthy moms who attended her yoga classes, Hamilton-Byrne managed to create one of the most potent female cults in recent history. She kept her “disciples”, including about 28 children, under total control, subjecting them to beatings and feeding them with psychosomatic substances. How did she succeed in fooling so many people for so long?

Anne Hamilton-Byrne wore expensive jewellery and Chanel perfume. She was always exquisitely dressed. Her blond hair was elegantly styled in waves that caught the light. And she had deep grey-blue eyes. Her former followers say those eyes were the primary source of Hamilton-Byrne’s power. “In ancient times we hear about enchantresses who could enslave people with one glance,” says Fran Parker, ex-member of The Family. “She had eyes that looked through your soul.” Looking at young Anne Hamilton-Byrne’s photos, it’s hard to imagine this gorgeous woman could convince hundreds of people she was the reincarnation of Jesus Christ and create a close-knit community living in strict obedience with no rights. Her cult began from hatha yoga classes and discussion meetings on the outskirts of Melbourne. Hamilton-Byrne preached a mixture of Christianity, eastern religions and miscellaneous esoterica, step by step imposing on her followers the idea of her divinity. 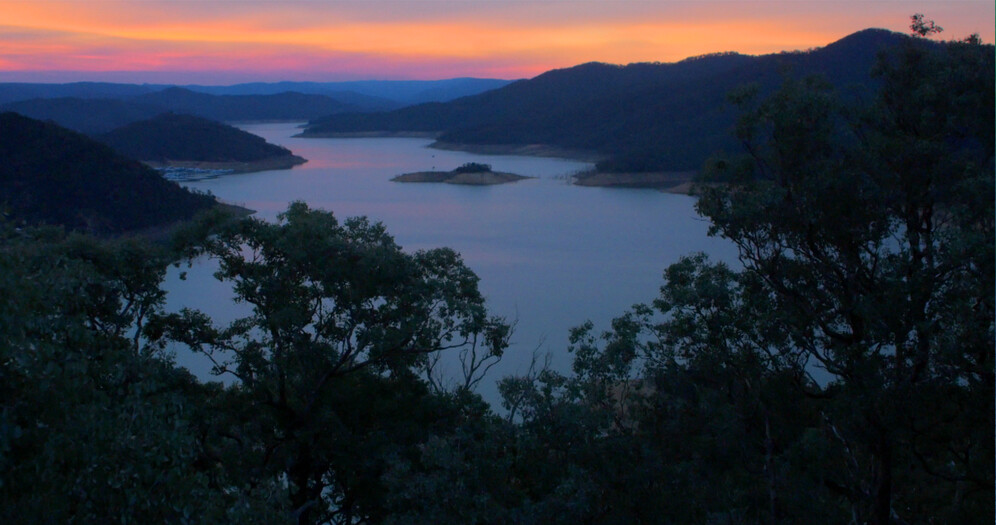 The Family (originally named the Great White Brotherhood) was born when Anne teamed up with Dr Rayner Johnson, a spiritualist and ardent fan of scientific experiments with LSD, who declared Hamilton-Byrne the new Messiah. Johnson’s entourage included wealthy and influential people, including physicians, lawyers, nurses, and social workers, and he managed to lure them into the sect. Most of the group members justified their actions by a desire to become the reincarnations of the apostles of the “new” Jesus Christ, that is, of Anne Hamilton-Byrne.

Anne Hamilton-Byrne was raised in orphanages — her mother was diagnosed with schizophrenia and placed at an insane asylum. Her father was an itinerant worker who couldn’t take care of his daughter. Anne Hamilton-Byrne’s first husband died in a car accident. It was then she first became interested in Eastern religions — yoga became her salvation. She knew well how to find chinks in others’ armour, so she quickly managed to turn her yoga students into her first devotees.

The Family settled down in Kai Lama, a rural property on Lake Eildon, Victoria. They lived under wraps for over two decades, being “unseen, unknown, unheard”. In all those years Anne Hamilton-Byrne managed to bring up about 28 children to the community through fake adoptions or as “presents” from her members. The Family’s children were believed to be the so-called master race and would survive the apocalypse to rule the world of the future. Thus, wealthy parents voluntarily gave their children to Hamilton-Byrne and her “aunties”. The master race kids were told Anne was their birth mother and other members of The Family — their “aunties” and “uncles”. They lived in isolation and had to obey Anne in virtually everything. 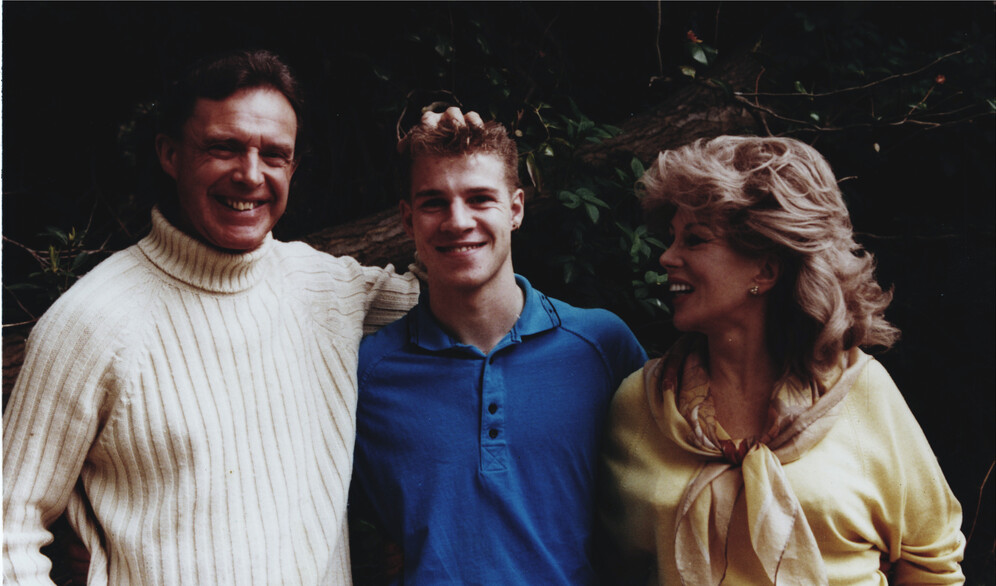 Bill and Anne with Adam Lancaster

The cherubic kids with their hair dyed blond became the most resonant symbol of The Family. “Everything [we wore] had to be polished and look the same,” says Adam, one of Anne’s “master race children”, interviewed by Rosie Johns for her documentary about The Family. His hair, naturally fair, was dyed totally blond to be colour-coordinated with the others. “That was to implant in us that we were all brothers and sisters.” Every minor disobedience, like getting their clothes dirty, was severely punished. Beating, and starvation diets were among The Family’s favourite methods. Though at times Hamilton-Byrnes performed the punishment, the dirty work was usually done by the “aunties” seeking their goddess’ approval. “Denial of food was a very large component of control,” says one survivor, who remembers eating leaves to stay their hunger. “It’s better to keep your victims weak, so they have less ability to fight back.” 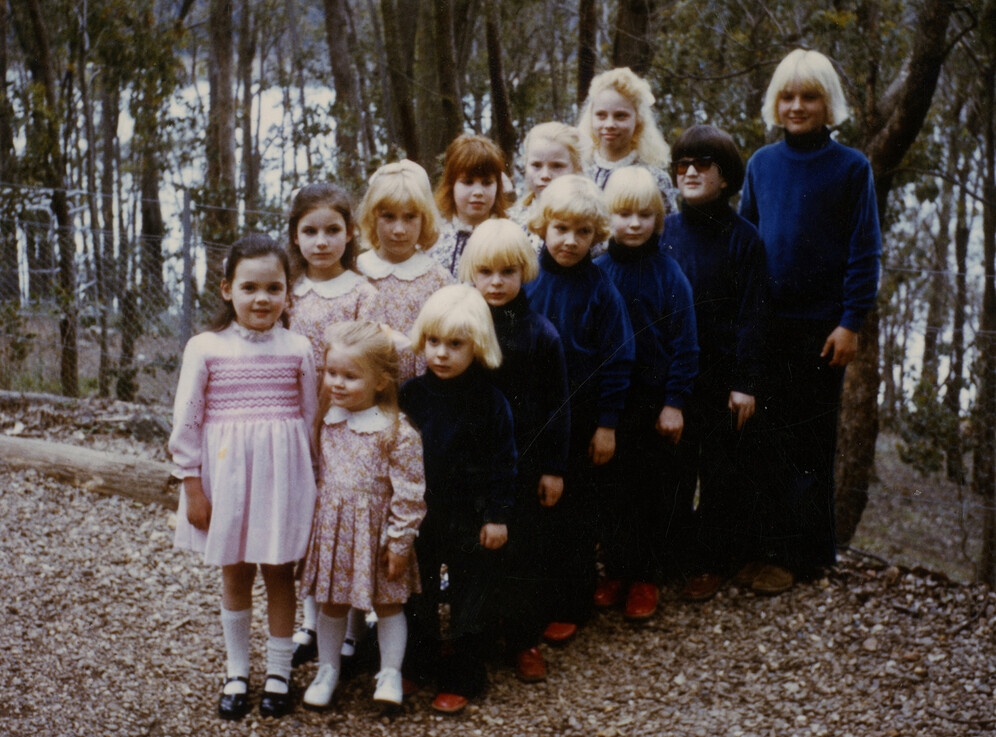 Children of the sect lined up by height

LSD and other psychotropic substances were a big part of Hamilton-Byrnes cult. Anne’s former children recall being given Mogadon and Valium daily to keep them obedient. When children reached the age of 14, they had to undergo formal initiation involving taking LSD-sponsored “trips” that lasted several days. Anne Hamilton-Byrne guided the children on those trips, ensuring they accepted her divinity. The Family used a private psychiatric hospital in Kew to recruit new members from ex-patients and to provide LSD to its members. Apart from LSD, the cult employed other methods of compulsory psychiatric treatment, including electroconvulsive therapy and lobotomy. The prolonged doses of LSD and other substances had destructive effects on the bodies and minds of adult patients, let alone the kids. For some teenagers, the results were horrifying — they suffered depression, night terrors, personality disorders and social withdrawal, sometimes for months after the initiation. Several followers tried to commit suicide either while in The Family or after fleeing. Some succeeded.

Who joined the cult?

One fascinating thing about the group is that most of its members were relatively well-off people, intelligent and successful in their careers. They had nothing to do with the image of a proverbial poor hippie wearing rags with no money and no steady job. Raynor Johnson’s entourage included founders of the Liberal party and wealthy business people. It seems like Dr Johnson and his influential friends were deep under Anne’s charm and natural charisma. Raynor once recorded in his diary that after experimenting with LSD, Anne’s “face became divinely beautiful with sublime authority.” Sometime later, he wrote she was “unquestionably the wisest, the serenest and most gracious and generous soul” he’d ever met.

In 1987, Victoria police, tipped off by two escapees, raided the Kai Lama and removed all the children from the property. It turned out that Anne Hamilton-Byrne collected 10% of her fellows’ incomes and accumulated a fortune, including overseas properties in Britain and the US. Despite attempting to flee, Hamilton-Byrne was eventually extradited to Australia and put on trial. Despite numerous accusations, she was let off with a fine. 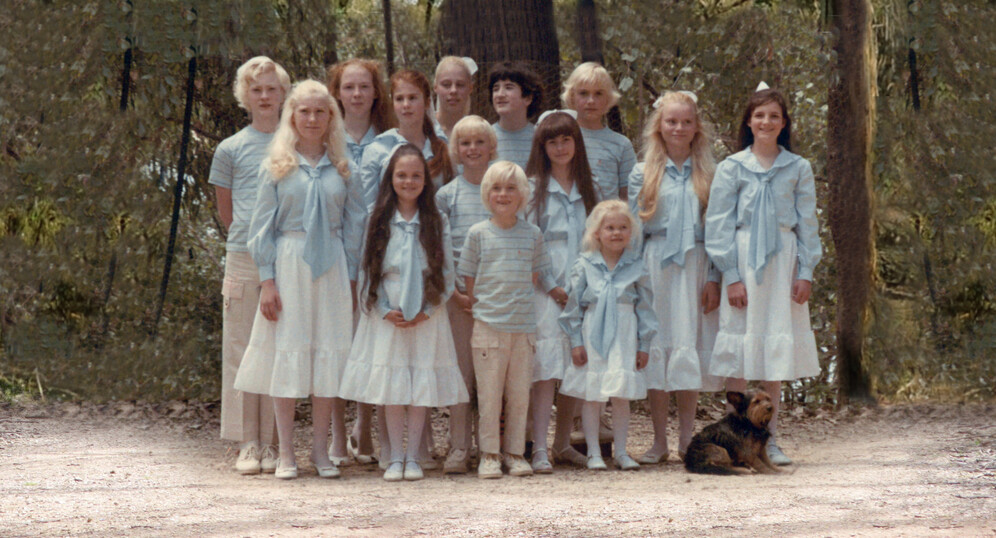 Children of The Family pose for camera

Anne Hamilton-Byrne spent her last days with dementia in a nursing home, where she died last year at the age of 98. However, her effect on her devotees lives on. Her “children” are still struggling with their childhood traumas and suffering mental and social disorders. Rosie Jones and Chris Johnston, authors of the book on The Family, met a man named Michael, who claims that the sect is still alive. They still hold regular meetings and worship their idol. But both Jones and Johnston say it’s now more about echoes of Hamilton-Byrne’s power, rather than the real thing.