Ultimate DIY: “I wanted to have a home.” Canadian couple take 28 years to build a self-sufficient floating homestead
TB activist on strict anti-coronavirus measures: “It's annoying! Every year, we have one million, one and a half million dying. Don't you care at all?”

Quarantine shaming: the mask of discord

Wearing face coverings to prevent the spread of the coronavirus has turned from a medical issue into a deep political debate. People in the US have at different times been found guilty of BOTH wearing and not wearing them. However, the sentiments polarising society have little to do with the mask protecting against the novel coronavirus. The simple piece of cloth has proven to be so much more.

From mask obsession to mask neglect

In mid-March, the novel coronavirus was wreaking havoc on the US healthcare system that was caught completely off-guard. Activists urged individuals to donate whatever surgical masks they had to hospitals suffering severe shortages. Some went as far as blaming those who'd been wearing masks – especially medical grade N-95 ones – for aggravating the shortages. Stocking up on masks that were "of no use" to non-medical personnel saw prices for masks spike.

That rhetoric was partly stirred by the authorities, including the US Surgeon General, who initially sent out a cryptic message in an attempt to manage the scarcity. However, it was counterproductive at best and encouraged even more hoarding. 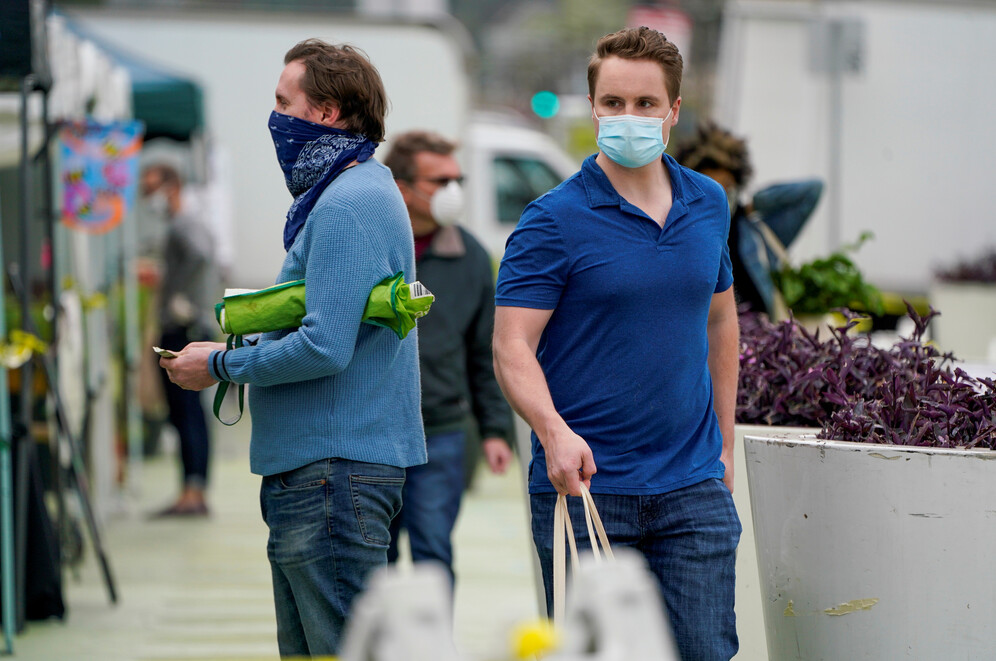 When Centers for Disease Control and Prevention admitted that mask-wearing could help decrease transmission rates, but medical masks were still a scarce commodity, homemade masks and even scarves were deemed an acceptable alternative/ REUTERS by Kyle Grillot

The internet instantly exploded with "how-to" videos to make DIY masks using anything from coffee filters to repurposed bras. On April 15 the New York State Governor Andrew Cuomo issued an executive order requiring everyone to wear a face covering in public or if they were unable to maintain a distance of 6 ft.

Retail chains, as well as essential businesses still operating, started to enforce mask rules. Several towns in the state of Massachusetts imposed a fine of $50 for failing to cover one's face in public. Repeat offenders would be fined $150 a second time and $300 the third. Riverside and San Bernardino counties in California introduced a fine of $1000 for failing to wear a face covering in public. Currently, 14 American states require wearing cloth masks in public places.

And that's when the tables turned. Only weeks before mask-wearers were the ones getting the looks, and now it was the other way around. Divisions were clearly drawn: people all over the country reported coming under attack from vigilant neighbours for not wearing proper protection. Online vitriol was now directed at runners exercising with bare faces and taxi drivers operating with the masks slipped below their noses; moms have been repeatedly shamed for letting their unmasked kids congregate on playgrounds.

Entire Facebook groups dedicated to chastising irresponsible individuals and businesses were suddenly popping up. For example, an Alaskan "Anchorage Businesses that Wear Masks" has been challenging firms that don't enforce face coverings and urging others to boycott them, while a private Facebook group bluntly named "That's it. I'm Coronavirus venting" has over 5,000 members who find sharing photos and stories about those who fail to follow the rules therapeutic and amusing.

Some believe COVID-shaming can work as a tool to raise awareness and improve overall compliance.

The Mayor of Providence, Rhode Island, Jorge Elorza has encouraged residents to "socially shame" those who don't wear masks in public, to help limit the spread of the virus. When shaming doesn't work, other creative ideas crop up.

Rather than arrest people defying bans on gathering in large crowds, police should spray them from a safe distance with a dye that won't come off for a few months, so their friends, family and the rest of us can know to stay clear from them.

Although most will probably find the suggestion by Matt DeRienzo, the editor-in-chief at the Center for Public Integrity, overkill, everyone who's been navigating the current pandemic has at one time or another been annoyed and tempted to stigmatise behaviour that could theoretically put others at risk.

Quoting Jennifer Weiner's New York Times column," The Seductive Appeal of Pandemic Shaming", "I'm not alone in my fury, or my impulses. My Nextdoor.com is writhing with finger-pointing; my Facebook groups are roiling with gotchas. I saw a supermarket cashier without a mask! I saw a man use an ATM pad with his bare hands! My idiot cousin is posting conspiracy theories! My mom went and got a pedicure!"

A conflict between social responsibility and personal freedom, for some "the mask debate" has become a metaphor for a fight between good and evil.

The sense of righteousness when you get a legitimate pretext to call out someone in the wrong may be oh-so-sweet, but sometimes tempers run too high. In the US this has led to several violent incidents. A security guard in Michigan was shot and killed for asking a customer to put on a face mask. While a police officer in Alabama forced down an unmasked shopper for refusing to leave a store. Also recently, a black man was forcibly removed from a public bus in Philadelphia by four police officers for failing to comply with mask-wearing regulations.

throwing off riders for not having masks. Are masks a requirement for riders? this dude's not wearing one pic.twitter.com/2IXtnI5dkO

There have been many complaints on the part of black or mixed-race individuals who don't feel safe wearing masks for fear of police profiling and even violence. This is especially sad since black communities account for disproportionally higher COVID-19 death rates and need all the protection they can get.

But the majority of those who refuse to wear masks despite the general sentiment cite other reasons – from hating the way they look in a mask to getting their glasses fogged up while wearing one. During the pandemic, which has claimed over 100,000 American lives, these do sound lame. But rebellion is part of human nature, and even the American political elite isn't immune to it.

Mask-shaming as the sign of a larger pandemic-induced trauma 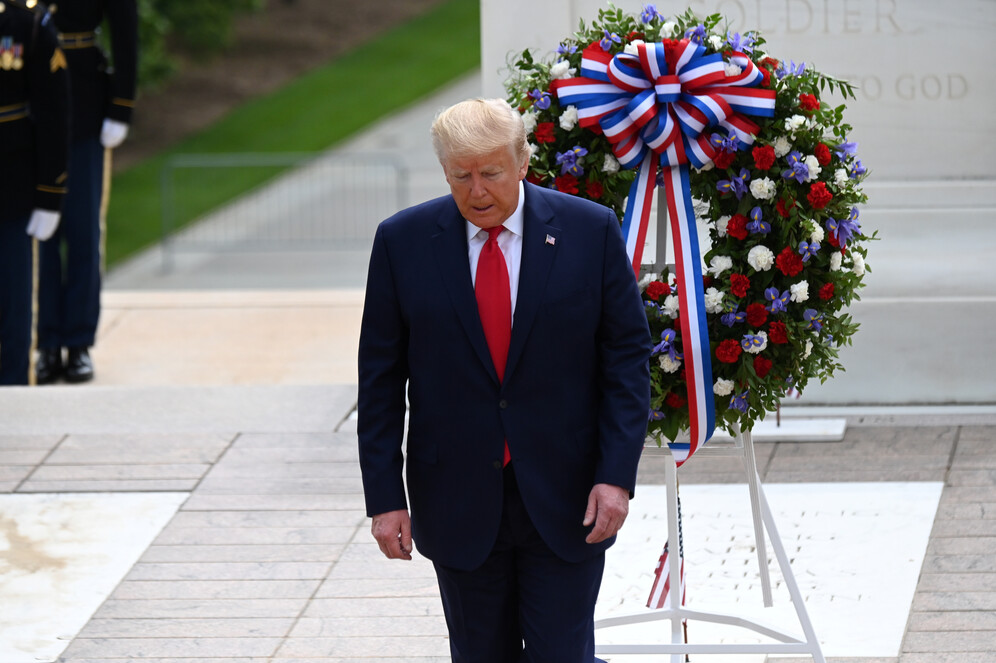 U.S. President Donald Trump participates in a wreath laying ceremony at the Tomb of the Unknown Soldier at Arlington National Cemetery in commemoration of the Memorial Day/REUTERS by Erin Scott

Donald Trump has been famous for showing up in public without a mask. Last week, he took part in a wreath-laying ceremony at the Arlington National Cemetery accompanied by an equally barefaced first lady Melania Trump and Vice President Pence. It came in stark contrast to his political opponent Joe Biden's attitude: the presidential candidate and his spouse showed up at the Delaware Memorial Bridge Veterans Memorial Park wearing black face masks. Neither Trump nor Biden could resist the temptation of remarking about each other's choices. Trump mocked Biden by retweeting a derogatory tweet from Fox News' host Brit Hume. At the same time, Biden called the President "an absolute fool" in a recent CNN interview, adding that "Presidents are supposed to lead, not engage in folly and be falsely masculine."

Politics aside, COVID-shaming has become a real issue in the nation ridden by the virus, with a third of the population showing signs of both clinical anxiety and depression,

according to recent findings from the Census Bureau. The alarming statistics of the country's collective mental health is understandable, given the circumstances.

After almost three months of isolation and ever-mounting uncertainty, people are trying as hard as they can to impose order on the chaos. And it feels good to rage about other people's selfishness and irresponsible behaviour because it provides the illusion of control. Even though you may think you are doing society a great favour by attempting to bring the errant individuals back in line, you're just probably venting your frustration at those you view as potentially dangerous.

Epidemiologist Julia Marcus says despite society's attempts to spread risk-lowering behaviour "some people will choose to engage in higher-risk activities—and instead of shaming them, we can provide them with tools to reduce any potential harms." However, whether they use them or not remains largely up to them.

As for those who believe safety measures are violating their freedom, psychologists suggest they view these temporary requirements not as a forced measure but a necessary display of solidarity. After all, together is the only way we can tame the virus.