Fact and Fallacy: History, beliefs & culture of Russian Gypsies
Yellow Vest protests in France. What are they about?

Book envy: which US President deserves the most space on your bookshelf? 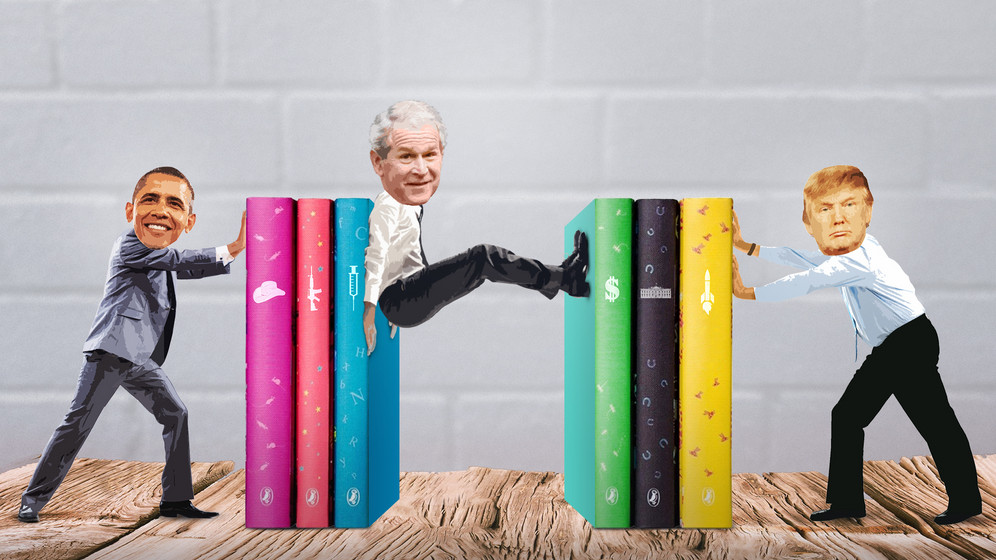 Which American President would take up the most space on your bookshelf?

Writing about U.S. Presidents is an entire genre of the book industry. Some attract more attention than others.

We compared books devoted to the three US Presidents since 2000 by searching for new paperbacks containing the President's name in the title or subtitle on Amazon. Although there is one clear winner in terms of the number of books written about him, each one seems to have cornered the market in specific sub-genres of presidential literature.

Who else? His footprint is 'uuge' [sic]! Even though he’s only been President for two years rather and hasn't completed a two-term stint like his predecessors, with 145 titles, Donald Trump is the undisputed overall market leader in presidential books.

He also tops the category of satire with titles such as Trump's America: Buy This Book and Mexico Will Pay for It or, intriguingly, Trump, Ghost Hunter: Believe Me, I know Ghosts: The Paranormal Adventures of The World's Greatest Living Ghost Hunter.

In addition, Trump is promoted as a role-model for business success and dispenser of savvy advice, with Donald Trump: Top 60 Life and Business Lessons from Donald Trump or Donald Trump: The Life, Lessons & Rules for Success. 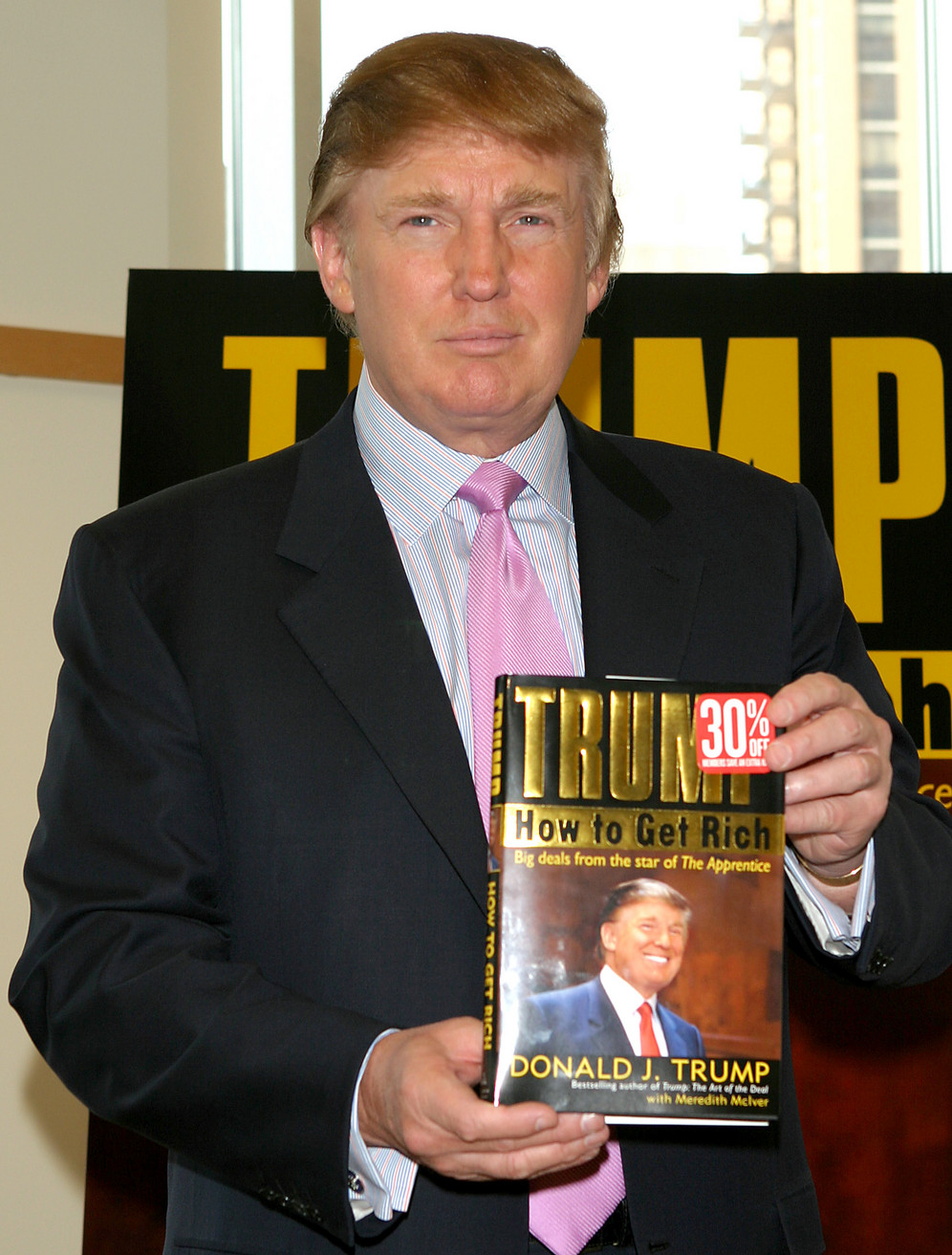 If you are a fan, there is plenty of choice such as I Love Donald Trump: Black Notebook/Journal for Writing (or you could get a white one), Thank you Donald Trump! or The Magnanimous Donald J Trump: Amazing Acts of Kindness from Our 45th President.

Books on the Russia collusion allegations are less popular with Amazon reviewers, be they anti Trump Russia Collusion: Secret Meetings, Murder, Money and How Russia is Playing U.S. Politics or pro the current president, The Coup D'état Against President Donald J. Trump.

Unlike his predecessors, no one has been inspired to explore his marriage(s). However, you can buy Raising Trump: Family Values from America's First Mother, written by Ivana, and The woman behind Trump: Things and secrets you might not know about the new first lady, not written by Melania. It might be worth leaving some space for a yet-to-be-written Marla companion volume.

The runner-up with 120 titles but it is OK to put his shelf a little lower, within reach of small hands.

Barack Obama may not win in numbers, but in the children’s literature category, he is king, with numerous titles such as TIME For Kids President Obama: A Day in the Life of America's Leader and America's First African-American President - Biography of Presidents | Children's Biography Books. Teens may want to read, Our Friend Barry: Classmates' Recollections of Barack Obama and Punahou School. 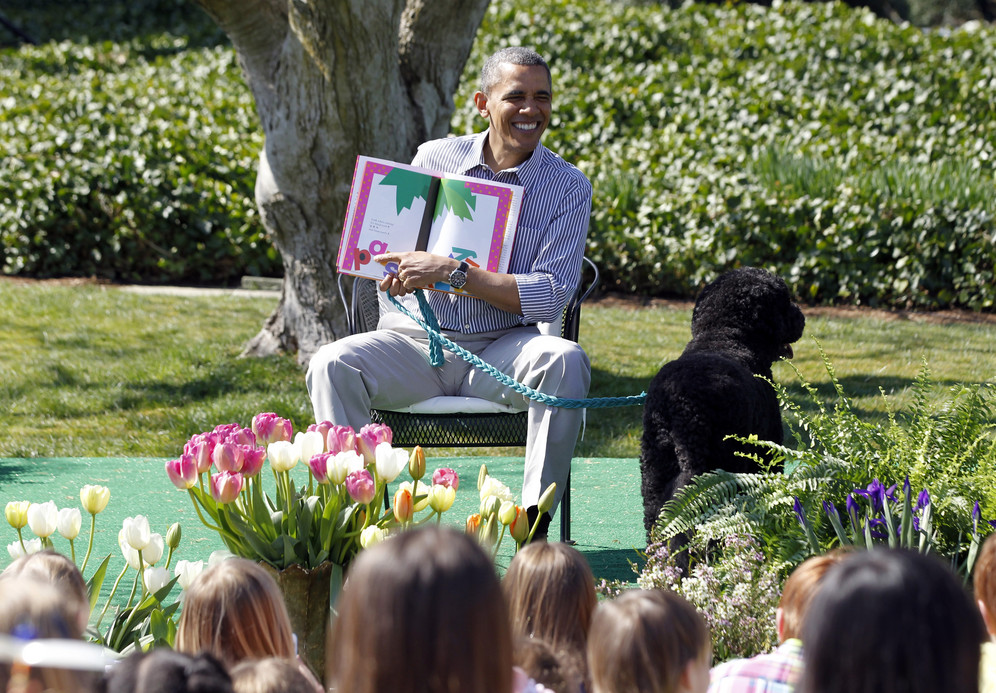 For obvious reasons, he has also inaugurated the subgenre of presidential racial identity reflexion, with a number of titles such as Barack Obama: Life Lessons: Challenges, solutions and lessons from the first African-American President and Black Enough/White Enough: The Obama Dilemma.

For pithy quotations, Obama gives Trump a run for his money with The Wit and Wisdom of Barack Obama by Barack Obama: Barack Obama Quotes. However, his persona is less business-oriented than... messianic, viz The New Rising Dawn Barack Obama: The Messianic President or Barack (Hebrew:Lightning) Obama: The Lightning that shines from the East to the West and his significance for the world, especially for the Faithful ... Israelis) who live in the Western hemisphere.

Topics of interest also include his marriage, Barack and Michelle: Portrait of an American Marriage and his wife, with titles such as Michelle Obama: First Lady of Hope.

For the undecided, detractors have published the now obsolete, 100 Reasons NOT to vote 4 Barack Obama or the presumably weightier 203 Reasons Not to Vote for Barack Obama: In the Words and Works of Obama, his Political Cohorts and Those who Know him Best.

Finally, you can stock up on Obama-themed esoterica with Barack Obama 2011 Day-by-day Tarot predictions: Under ancient Greek Philosophic view and the five other books in that collection.

Far behind is G.W. Bush with a mere 55 publications available new online.

The perception of W. as a lightweight has dogged him from the beginning, judging by Ambling into History: The Unlikely Odyssey of George W. Bush or Shrub : The Short but Happy Political Life of George W. Bush.

As the only twenty-first century President belonging to a political dynasty, the family angle was exploited differently by analysts, with In Praise of Nepotism: A History of Family Enterprise from King David to George W. Bush and First Son : George W. Bush and the Bush Family Dynasty, although you can also read the more conventional George W. & Laura Bush (Presidents and First Ladies).

U.S. President George W. Bush reads  'Twas the Night Before Christmas to Washington area schoolchildren at the White House December 17, 2002. The President began reading but quickly passed the book to the first lady to finish, saying he could not read without his glasses.  © Kevin Lamarque KL / REUTERS

Ten years after the end of his presidency, W. still wipes the floor in the faith-based category, with titles such as The Faith of George W. Bush and God and George W. Bush: A Spiritual Life., leaving Donald Trump in the dust.

There is nothing to be found that is comparable to the devotion that Trump and Obama inspired. However, you might like to leave a little space for presumably positive assessments of his presidency like Rebel in Chief: Inside the Bold and Controversial Presidency of George W. Bush or Bush Country: How George W. Bush Became the First Great Leader of the 21st Century---While Driving Liberals Insane.