“Leftugees” flooding the red states: the liberal exodus of America
Law on Mars? Why Elon Musk is writing the Red Planet’s constitution

During WWII, after her beloved husband was killed in combat, Maria Oktyabrskaya bought herself a T-34 tank, learnt how to operate it and took part in several battles. Her machine’s name “Fighting Girlfriend” was later passed on to new tanks to honour her memory. How did Maria go from being a woman known for her style and skilled embroidery to become an inspiration for soldiers on a battlefield even after her death?

The wife of an officer

Maria was born in a Crimean village to a family of peasants. After graduation, she went to work at a cannery and became a telephone operator. Her parents were exiled to the Urals. In Simferopol, Maria met a cavalry school cadet Ilya Ryadnenko, and in 1925 they tied the knot. The newlyweds decided their new family should also get a new surname, to honour the October Revolution. This is how they ended up as Ilya and Maria Oktyabrsky.

After Ilya graduated from school, Maria became the classic wife of an officer. Moving from place to place in Ukraine, not the most arranged and organised life. All this did not frighten her; she was happy to be next to the person she loved.

In military garrisons, Maria did not waste time. She learnt how to drive, went to nursing school, and mastered the machine gun.

At the same time, Maria was famous for her refined taste in clothing among the wives of the command staff and was known as a great master of needlework. Besides, the Oktyabrsky’ apartment was always in perfect order.

In 1940, the 134th Howitzer Artillery Regiment, in which Ilya Oktyabrsky served, was transferred to Kishinev, Moldova. Maria followed her husband as usual. They arrived in Moldova on June 22, 1941.

The next day, the family members of the command staff were evacuated to the city of Tomsk. At first, Maria Oktyabrskaya worked on the construction site. Because of her health problems, she had spinal TB, she changed her occupation and went to work as a telephonist at a military school. One day she received an official letter all women were afraid of:

“Your husband, regimental Commissar Ilya Oktyabrsky, died a brave man’s death on August 9, 1941, in one of the battles in Ukraine.”

Maria was devastated and depressed. She filed an appeal to the local military enlistment office requesting she be sent to the front, but the request was denied several times. The military office referred to her illness and her age; she was 36 years old at the time.

Following the death of her husband in 1941, Mariya Vasilyevna Oktyabrskaya donated all of her possessions towards the...

A Telegram To Stalin

However, Maria refused to give up. Just like the country was raising funds for its military sector, Maria decided she’d save up to buy a tank on her own. Together with her sister, she sold all her belongings, but it wasn’t enough. She figured out she could sell her embroidery. Even during the war years, people willingly bought handmade tablecloths and scarves. Maria spent months making embroidered pieces after work. Finally, by the spring of 1943, 50,000 rubles were collected and transferred to the State Bank.

After that, Maria Oktyabrskaya sent a telegram to the Kremlin, addressed to Stalin personally.

She reported that she had collected money to buy a tank and asked to name it “Fighting Girlfriend”. She also demanded to be sent to the front as the driver of this tank asserting that she had all the necessary skills to do it. Maria was the only one who believed that she would receive an answer. And she did. Stalin thanked her and promised that her request would be fulfilled.

On May 3, 1943, Maria Oktyabrskaya was enrolled in the Omsk Tank School and became the first female tank driver in the country. She was an excellent student, and by the fall of 1943 graduated from the school with the rank of sergeant. Maria was enlisted in the crew of Second Lieutenant Pyotr Chebotko, Sergeant Gennady Yasko, and Radio Operator Mikhail Galkin. “Fighting girlfriend” was written on both sides of her brand new T-34.

At first, soldiers were confused; a woman was in this typically male position.

Her story was relatively well-known, and nobody had the guts to say that she didn’t belong here. However, many doubted whether she could bear the burden she had taken on. From the first battle, doubts were dispelled — under the hostile fire; Sergeant Oktyabrskaya skilfully managed the “Fighting girlfriend”. The battalion commander even thanked the crew of the “Fighting Girlfriend” over the radio, congratulating the tank crew on the successful fulfilment of the combat mission./Illustration by Arina Ionova

In the battle for the village of Novoe Selo, in Belarus, “Fighting Girlfriend” broke the enemy’s defence lines, destroyed a cannon and about 50 German soldiers and officers. The tank was hit and rolled into a small ravine, where it could not reach the enemy guns. It was not possible to tow the tank from the battlefield, but the crew decided not to leave it. For another two days, the crew fought off attacks with the tank’s cannon and their own weapons, until it was possible to bring it out for repair. In that battle, Maria was slightly wounded but remained with her comrades.

In January of 1944, Sergeant Oktyabrskaya’s battalion was part of heavy fighting near Vitebsk, Belarus. On January 18, the driver-mechanic Oktyabrskaya crushed three machine gun points and up to 20 enemy soldiers and officers with her tank.

During the battle, the tank’s track was seriously damaged. Despite the fire of the enemy, the brave woman started to fix it, but a mine exploded nearby.

Maria was seriously wounded in the eyes. She was taken away from the battlefield and evacuated. In a field hospital, Maria had an operation. Then she was transported by plane to the front hospital located in Smolensk. Her condition deteriorated as the bomb shard, after piercing the eye, also damaged her brain. She was ordered to be taken to Moscow to receive better care. Still, her condition only worsened, she was not transportable, and the periods of consciousness were becoming shorter and shorter. 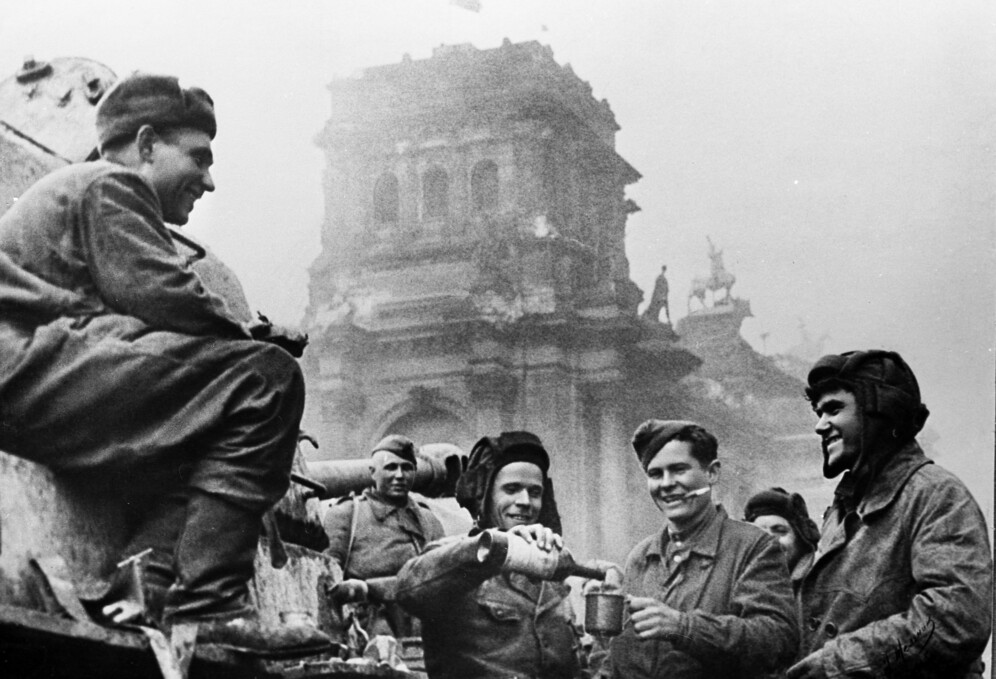 The crew of "Fighting Girlfriend" T-34 tank in Berlin, May 1945/By Mikhail Melnik via RIA Novosti

Her colleagues, young tankmen, used to call her “mother”. Major Topok came to visit Maria from the regiment, bringing a letter from the “sons”. They wished her all the best and promised to take vengeance. Major Topok was the last visitor the doctors allowed to see Maria. Later on, her condition did not allow her to have visitors; she was unconscious almost all the time.

Strong men who knew her story clenched their fists and kept repeating like a prayer: “Please, don’t die!”

Doctors did everything they could, but there was no time for miracles. At dawn on March 15 1944, Maria Oktyabrskaya died. She was buried with military honours on the bank of the Dnieper river, next to the heroes who fell in defence of Smolensk during the Patriotic War of 1812. Maria was presented to the order of the Patriotic War of I degree while she was still alive. She was awarded the title Hero of the Soviet Union posthumously on August 2, 1944. 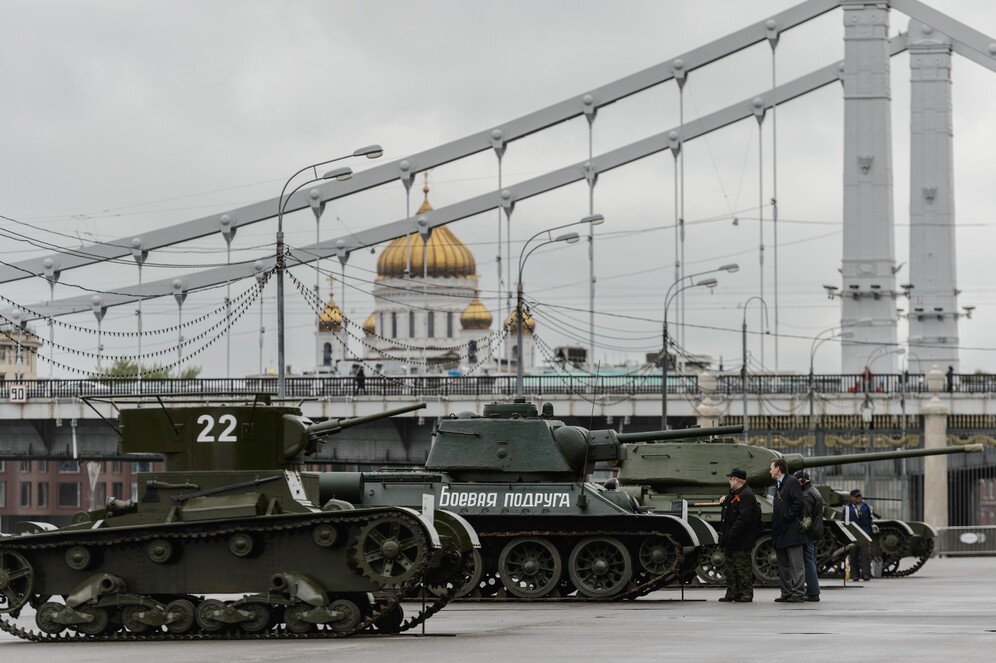 The fate of “Fighting Girlfriend”

The Germans destroyed the tank bought by Maria Oktyabrskaya in one of the battles. So the young tank operators, in memory of their lost “mother”, branded a newly-issued tank “Fighting Girlfriend”. This tank was decommissioned after the battle for Minsk, but the crew replaced it by a new one and gave it the same name, so the tradition lived on. The fourth tank with the name “Fighting Girlfriend” reached Konigsberg, where it ended the war. Several streets in various former Soviet cities are named after Maria Oktyabrskaya, and a monument is erected on her last battlefield.