Coronaspiracy Theory: RTD asks a Russian virologist if there is any truth to Chinese and US accusations of criminal intent behind Covid-19
Faux outrage over foie gras: Liver ban leaves producers livid

If the worldwide coronavirus scare isn’t enough, locusts are adding to the apocalyptic ambience. Since late January, Africa has been combating an unprecedented locust invasion. The UN fears favourable weather conditions — high humidity and strong winds — will allow the locust population to spread across 20% of the world, leading to massive food shortages and famine.

“It is these weather events which are creating the environment to facilitate the current locust outbreak”, explains Sir Mark Andrew Lowcock, head of the United Nations Office for the Coordination of Humanitarian Affairs on the UN News portal.
“Unusually heavy rains and increase in the frequency in cyclones in the Indian Ocean have created favourable conditions for the locusts to breed,” he added. 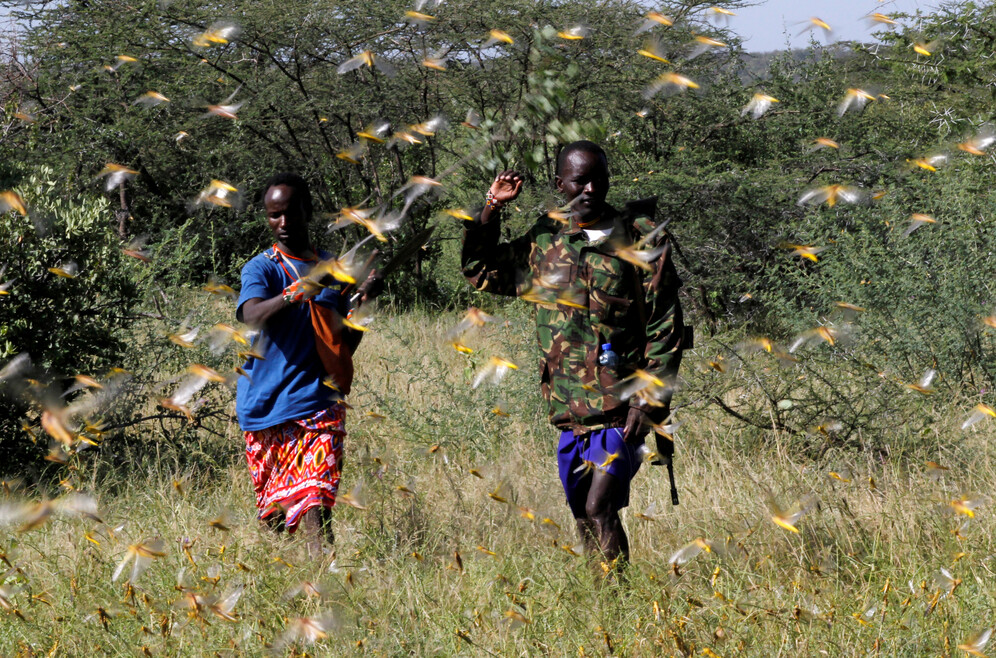 Locusts aren't likely to cause havoc in rich countries. Since they mostly affect poorer people, the problem attracts little attention from the wealthy nations. REUTERS/Njeri Mwangi

Suitable weather in the south of the Arabian Peninsula allowed three generations of locusts to develop unencumbered. By early 2019, starting in Yemen, Saudi Arabia and Iran, the insects began reproducing and spreading towards East Africa. The next swarms formed in Eritrea, Djibouti, and Kenya.

Infestations this big haven’t reached Kenya in 70 years, while outbreaks affecting Somalia and Ethiopia haven’t been as violent for over two decades. Currently, Uganda, Tanzania, and South Sudan are also on the UN’s watch list. These countries are facing the possibility of an imminent humanitarian catastrophe.

The ancient curse: locusts in history

Locusts have been known as a natural disaster since biblical times. In one of the 10 Egyptian plagues mentioned in the Old Testament, God had locusts devour the Egyptian crops pressuring the Pharaoh “to let his people go”. 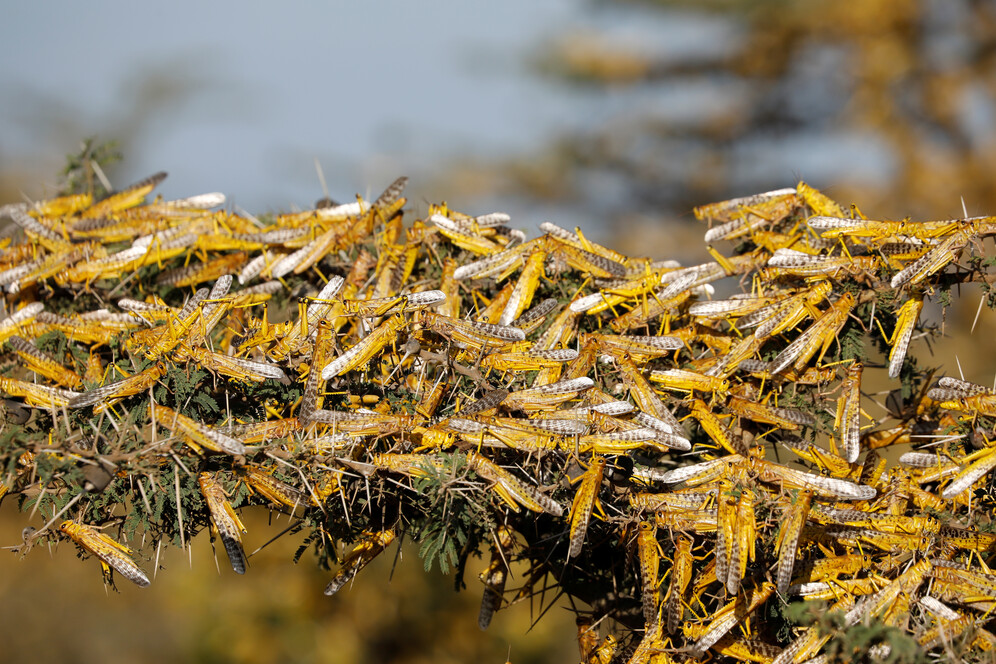 Locusts are highly cannibalistic - as food becomes scarce, they turn on each other. REUTERS/Baz Ratner

In more recent history plagues of locusts have appeared in the 20th Century as well. In WWII the British successfully fought to protect Middle Eastern supply lines from insects with poison bait and chemical sprays.

Decades later, Madagascar suffered a severe locust invasion which resulted in a food crisis in 2013. The campaign to deal with the insects and their aftermath cost $22 million. The measures saved up to 13 million people or about 60% of the island’s population.

Remember when I posted a report about the plague of locusts devastating east Africa? We support a pastor in Kenya who sent this video. He says all vegetation is gone, farming is destroyed, and I imagine a famine is on the way. Please pray for Kenya. #Kenya #Locusts pic.twitter.com/g3LrGd7P3H

In June 1993, a disastrous infestation decimated crops in Ethiopia, Sudan, Eritrea, Somalia, and Djibouti. In 1988 international aid amounted to $250 million with infected areas being sprayed with three million litres of pesticides in six months. Between 1986 and 1989 locusts attacked about 30 African countries, and along with with pesticide contamination, gravely reduced crop yields.

How significant is the damage?

The desert locust usually inhabits dry areas in about 30 countries between West Africa and India, covering approximately 16 million square kilometres. The area is sparsely populated, which makes it almost impossible to spot a disaster building in time.

An average swarm — up to 40 million insects — can travel over 150 kilometres a day, hatching eggs on the way and devour enough food to feed 34 million people.
The locust’s life span ranges between three weeks to months, depending on the weather and ecology. They are swift to reproduce, and it makes them all the more unpredictable and dangerous. Researchers in Kenya reported enormous swarms of up to 200 billion insects, which the UN says can only keep growing. 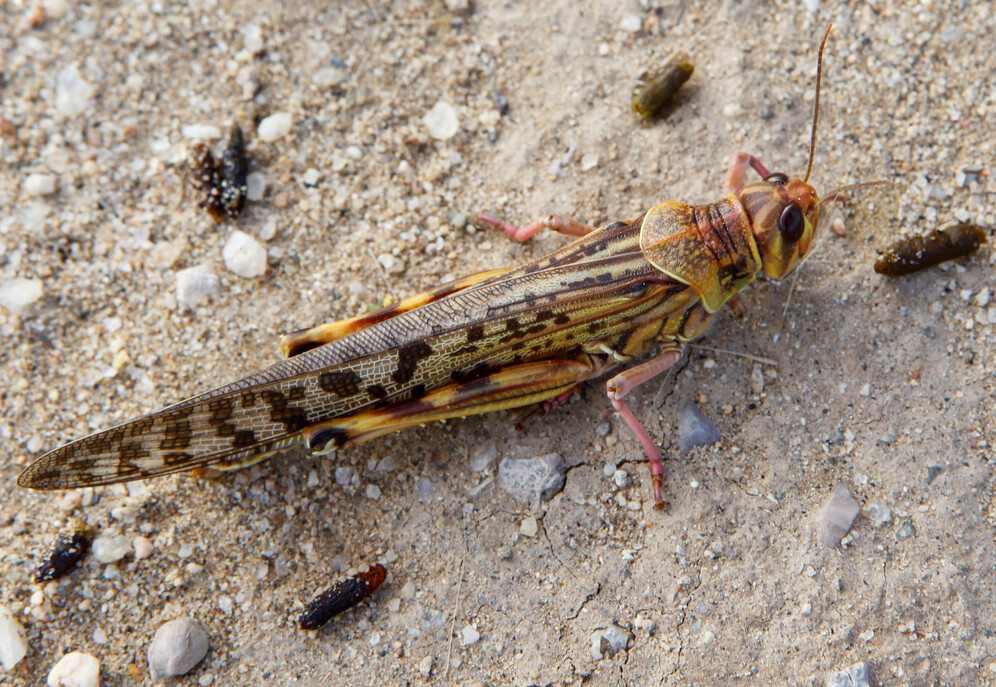 Normally, they lead a solitary life, but, with favorable weather conditions, their numbers soar, their behavior shifts to social, and the color - from brown to pink. REUTERS/Njeri Mwangi

The disasters often strike countries already vulnerable due to their struggling economy and poor living conditions. For example, Somalia and Sudan faced a locust-driven famine in 2017, after communities had suffered drought and floods in the previous two years. The current infestation is threatening food security in Kenya, according to the country’s UN Ambassador Lazarus O. Amayo.

How do we fight it?

At one time attempts were made to use explosives to eradicate locusts, but it only caused irreparable damage to farmland. Today, drones spray the insects with pesticides, but it also severely harms the crops and is very expensive. In 2003-2005, the cost of all anti-locust campaigns reached $450 million with the crops worth $2.5 billion irreparably damaged.

The most effective way to combat locusts is — like any disease — to learn how to catch the plague as early as possible before it starts to spread and destroy a countries’ livelihood, according to Rick Overson, the research coordinator at Arizona State University's Global Locust Initiative.

Currently, researchers are trying to come up with a milder pesticide that will not affect crops — using an innovative substance based on Metarhizium acridum fungus, which is only lethal to locusts and grasshoppers. The research is slowed by a lack of funding and the boom and bust cycle character of the problem. 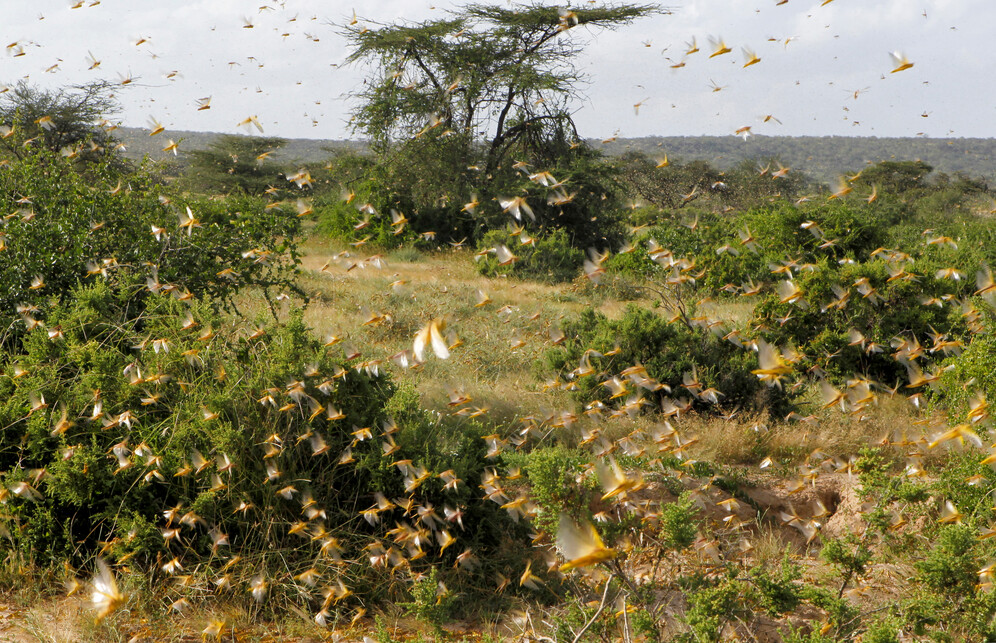 If locusts are not stopped, they could infest up to 20% of the planet, and affect 65 already struggling countries. REUTERS/Njeri Mwangi

However, the scientists are convinced there shouldn’t be total eradication of locusts as this may lead to an eco imbalance. "It's one of the wonders of the natural world," said Iain Couzin, the director of the Max Planck Institute of Animal Behaviour who researches locust swarms. "We don't want to stop them. We just want to manage them."