Migrants, Japan & extreme traditions: RTD’s most popular films of 2018
Book envy: which US President deserves the most space on your bookshelf?

Gypsy culture, romantic and mysterious, has long captured the imagination of writers and musicians. Caravans of brightly clothed Gypsies travelling all over Europe entranced villagers with their songs and dances. However they were also met with suspicion because of their insistence on living by their own laws, apart from wider society.

There is no homogenous Gypsy culture, there are many Gypsy groups that differ in language, customs and history around the world. In Russia, the degree to which they have adapted to modern life, and integrated into society, also varies.

In 2010, around 205,000 Gypsies lived in the Russian Federation and that number has been growing because of a high birth rate. Around half live in cities with the rest in rural settings. They are no longer nomadic.

Because Gypsies originally came from India many centuries ago, their languages are rooted in Sanskrit, but with additional vocabulary and grammar picked up from the European peoples with whom they have interacted. In Russia, there are ten known Gypsy dialects but only two have been studied extensively.

As well as the so-called Russian Gypsies, or Roma, there are groups who came from Poland, the Serve and Valakh who came via the Ukraine from Romania, and the Kalderash, the least assimilated group, who came from Romania in the 19th century. All are Orthodox Christian, though some traces of the Hindu caste system still remain, those for example who are obliged to follow their father’s trade. Crimean Gypsies, on the other hand, are Muslim.

The Roma first arrived in Russia in the 18th century. They found their niche in Russian society through working as horse traders and performing artists for aristocrats. Some were quite successful and became rich. Because their music and dances were in high demand, they adapted them for Russian audiences, singing in Russian and making romance songs their own.

After the Revolution, a Gypsy Theatre was established in Moscow and attempts were made to define correct Gypsy language. Thus, a Gypsy high culture emerged, but it is difficult to tell how much of it is authentic, as cultural influences have worked both ways.

In 1956, the Soviet Union banned nomadic living, so Gypsies had to settle in one place. Russian Gypsies started going to school and universities. They lived among Russians and intermarried. Some have joined the professions but in Moscow, Gypsies tend to work either in the arts or in trade. Many now deal in cars rather than horses. 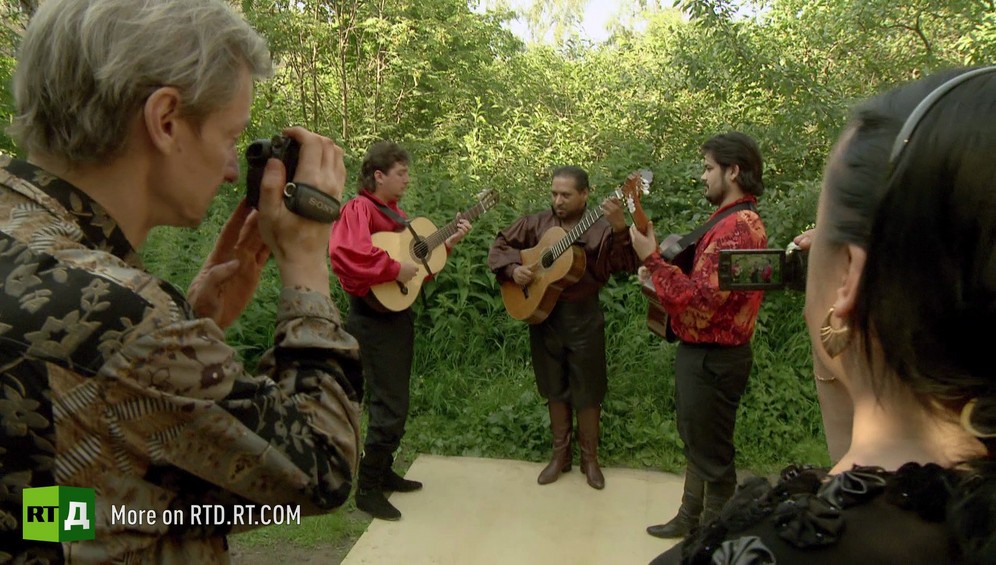 Valeria Yanysheva and Nikolai Bessonov’s “Senko” project aims to record Gypsy culture before it dies out. Here, they are recreating a traditional Gypsy band, including painting their faces to reproduce the weather-beaten look of traditional Gypsies. / A still from Romany Romance.

Russian Gypsies are aware of their heritage, join Gypsy musical groups and have not completely abandoned traditional family models. Young people marry early, women wear skirts rather than trousers and girls save themselves for future husbands.

Kalderash Gypsies keep to themselves

Those who keep most separate from Russian society are the Kalderash Gypsies. Although they no longer travel, they still live in "tabors", or camps, on the outskirts of villages. They speak both Kalderash and Russian. 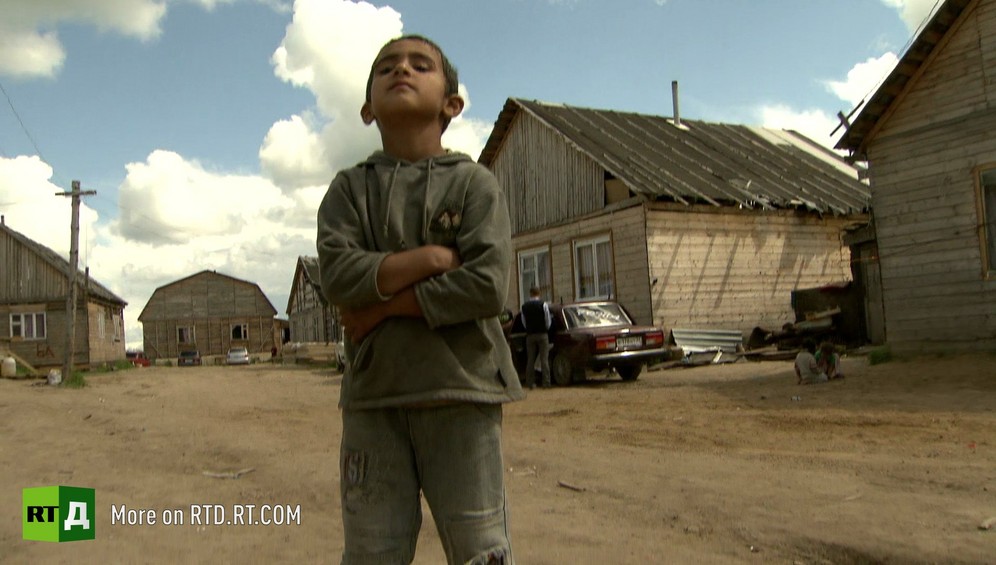 Kalderash Gypsies live in their own settlements, in houses they build themselves, on the outskirts of villages. / A still from Romany Romance.

Kalderash society is built around tight-knit families in which arranged marriage is the norm. Parents choose a suitable spouse from a Gypsy family in another tabor. The wedding takes place when the groom is ten to twelve years old and his bride just a couple of years older, but the marriage is not registered officially.

Although young couples may wait a while to consummate their marriage, Kalderash wives start having children early. This raises their social status because under their patriarchal system a wife must obey her husband and submit to her mother-in-law.

This also explains why Kalderash children have very limited schooling. Boys do not study beyond middle school and girls even less. The emphasis is on keeping house and providing for the next generation. 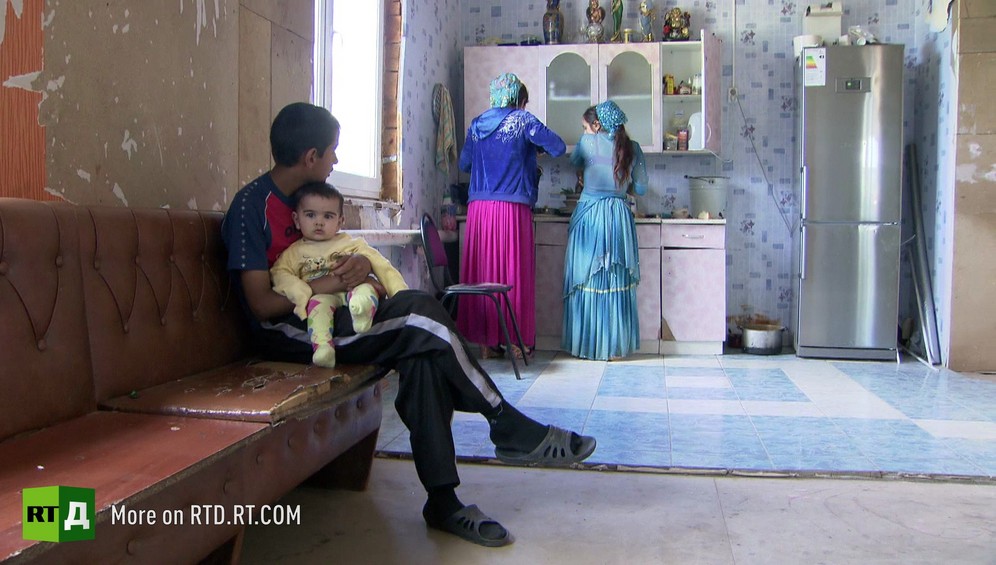 In Kalderash society, young couples live with the husband's parents. Yasha, twelve, is babysitting his nephew while his mother is supervising his wife’s housekeeping tasks. They have been married for a year. Yasha went to school for five years but his mother thinks he didn’t learn much. / A still from Romany Romance.

The name Kalderash is derived from the word "cauldron", an association rooted in their initial specialism in metal-work. Nowadays, the men sell scrap metal and work on building sites. The women may earn money as fortune-tellers but the idea that they might seek jobs is unthinkable.

Gypsies have their own moral code, and a lack of awareness of this value system explains the negative attitudes and reputation that often follow them. For a start, Gypsies divide the world into Gypsy and Gadjo, or non-Gypsy. It is acceptable to lie to outsiders.

As anthropologist Konstantin Kuksin, director of the Museum of nomadic life in Moscow, explained: “if you deliberately hurt Gypsies, they will take their revenge but in general, they are a very peaceful people. Their rap sheet among us has been collected over six hundred years”. They avoid killing, however. This would be bad for their karma.

Rumours of child-snatching that have dogged them are based on the fact that childlessness is a tragedy for Gypsy couples. However, according to Konstantin Kuksin, “Gypsies don’t steal children. They have many of their own, why taken on an extra mouth to feed?” Childless couples have sometimes offered to take on a baby if they met a widower who couldn’t cope. 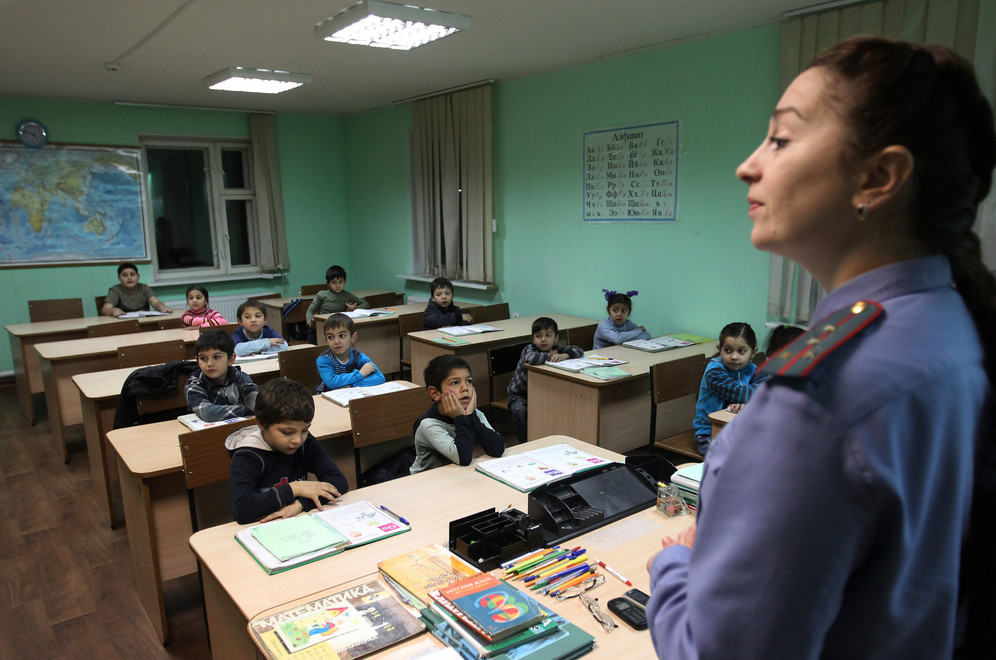 A policewoman teaches children about human rights and responsibilities at the primary school for Gypsies in Chudova, Western Russia. RIA Novosti / © RIA Novosti

Local authorities in Russia are trying to encourage families to leave their children in school, even after they are married, and to delay having children. However, they avoid enforcing building regulations and marriage age laws too rigidly because upsetting Gypsies has not historically produced good results. Building good personal relationships has tended to prove a more effective approach to dealing with the aspects of their way of life that clash with modern society, while showing respect for their independent spirit and the centuries-old ties that bind them.

You can find out more about Gypsy culture and customs such as child marriage, you can watch Romany Romance.