Real-life fight clubs: self-improvement or self-destruction?
Your Microbes Want A Cheeseburger: How bacteria living in our bodies make decisions for us

The Kremlin’s prettiest weapon: How a famous Soviet model ended up in a psych ward

Regina Zbarskaya was envied by millions of Soviet women and admired by men both in the Soviet Union and abroad. It seemed she had it all and life had a lot more in store for her, but she spent her last days in a psychiatric hospital and committed suicide at 52 abandoned and forgotten.

Unlike the story told in a Russian TV series about her, Regina (her maiden name was Kolesnikova) wasn’t a poor orphan from a provincial town whose only hope for a better life was a place at university. She was raised in a family of a well-off military official. Although the war years weren’t bountiful, kids didn’t enjoy toys and treats they’d have in the time of peace, the northern city of Vologda, where Regina spent her childhood, was not on the front line, occupied or bombed.

As one of Regina’s colleagues recalls, she came to Moscow with her father, who transferred to the Soviet capital after divorcing his wife. “Nikolay was a good-looking man with a successful career and a steady high paycheck,” recalls Valentina Filina in an interview. “In Moscow, he was immediately provided with a good apartment in a prestigious part of the city.”

From movie screen to fashion shows

Regina was a good student at school, but her dream had nothing to do with academic achievement. She was drawn to acting and chose to go to the State Institute of Cinematography. For some reason she chose the economy faculty, bur still never missed an audition, always tried to network, had bohemian friends and didn’t give up her dream.

She did get lucky once and got a cameo role in a movie about the International Youth Festival of 1957. This was her only screen appearance, though a bright one.

Regina is playing the part of Sylvanna in her only film, A Marine from "The Comet".

However, her association with the art world wasn’t in vain. At one of the parties at the Mosfilm movie studio, Regina ran into Vera Aralova, the renowned fashion designer. Aralova appreciated Regina’s looks and slender figure and offered her a modelling position at the All-Union House of Fashion. By that time Kolesnikova probably figured out she wasn’t cut out to be an actress, while as a model she could travel abroad — something of a luxury in the Soviet Union — and earn good money.

A decade of glory

Vera Aralova was a very influential figure in the Soviet fashion industry. Long before Vyacheslav Zaytsev and Valentin Yudashkin, the pillars of Soviet and later Russian fashion for decades, Aralova showed her collections in Paris in the late 1950s. She was the reason Regina’s career was so spectacular.

Some of designs by Aralova were ahead of time in the Soviet Union and even laughed at in satirical TV programmes, like these boots in the video. In France, however, they were greatly successful.

But it’s unfair to say Regina didn’t contribute to her success. She was very dignified. She knew how to show herself off to her best advantage. For example, there was gossip among her colleagues that her legs weren’t perfect enough for a model, and one foreign photographer took any chance he got to take a picture of Kolesnikova’s legs. When he finally succeeded and published the photo in a magazine captioned: “and these are the leg’s of the prettiest Soviet model!” no one reacted — because Regina herself was above all that and didn’t give in to provocation.

All foreign trips were closely monitored by the KGB with a lot of interviews and paperwork. Still, Kolesnikova-Zbarskaya was a frequent flier. Though she didn’t get to leave the Soviet Union as often as her blond colleague Mila Romanovskaya — Mila better suited the classic Russian beauty stereotype than her brunette coworker — Regina was the one suspected of ties to the KGB. The rumours she was a KGB informer began when she started working at the Fashion House.

A défilé in the Fashion House

“There was something strange in Regina’s behaviour, which, if you think about it, can be explained by her affiliation with the secret services,” recalls Aya Semynian who used to work on the Fashion House-owned style magazine. “For example, we knew nothing about Regina’s past. She was supposed to come from a small town, to be raised in a regular family, but her attitude and her manners told a different story, she had an exquisite taste and very good manners”. Also, Aya mentioned that Zbarskaya often showed up in exclusive outfits and never told the other girls where she got them. She was also fluent in English and French, which was very rare in the Soviet Union.

Models at the Kuznetsky Most Fashion House, Regina is fourth from the left/RIA NOVOSTI by Vassily Malyshev

Regardless of the grey areas in Regina’s biography, her modelling achievements were glowing. Regina’s hairstyles were the most frequent requests at hair salons. Also, not all catwalk models were good at photoshoots. They lacked plasticity and artistic faculties — something Regina probably inherited from her audition days. She always chose the style for her photoshoots herself.

After her foreign trips, Regina got into the Western press as the “prettiest weapon of the Kremlin”. She knew foreign celebrities like Pierre Cardin, artist Nadia Léger and singer Ives Montand.

Regina with a group of colleagues vists Paris.

Zbarskaya remained the Fashion House star model till the late 1960s. She had taken the name of her husband, Felix-Leo Zbarsky, a well-off young artist from a family of academics. His father, Boris Zbarksy was the head of the laboratory at the Lenin mausoleum whose job was to oversee and maintain Lenin’s body. 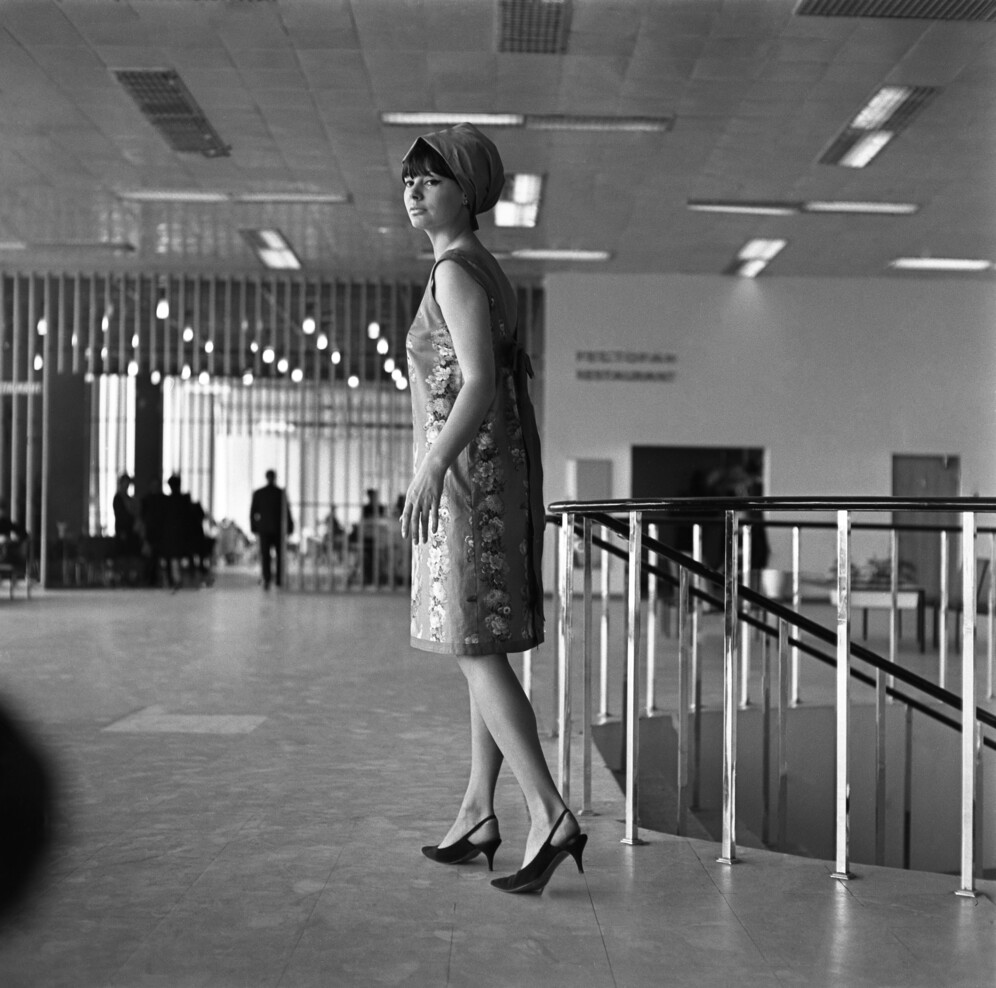 Regina and Leo met when the artist was invited to design for the style magazines. He was stunned by Regina’s beauty and her ability to carry herself. He took her to fancy restaurants and showered her with expensive gifts. By the time they got together, Regina had an unsuccessful relationship from her time in college, and Zbarsky had divorced his first wife.

The couple settled in an apartment in a prestigious Moscow district. But their ardent passion soon withered. It was the routine of family life and the relaxed bohemian lifestyle оf both spouses who were used to a lot of travelling that irreparably damaged the marriage. 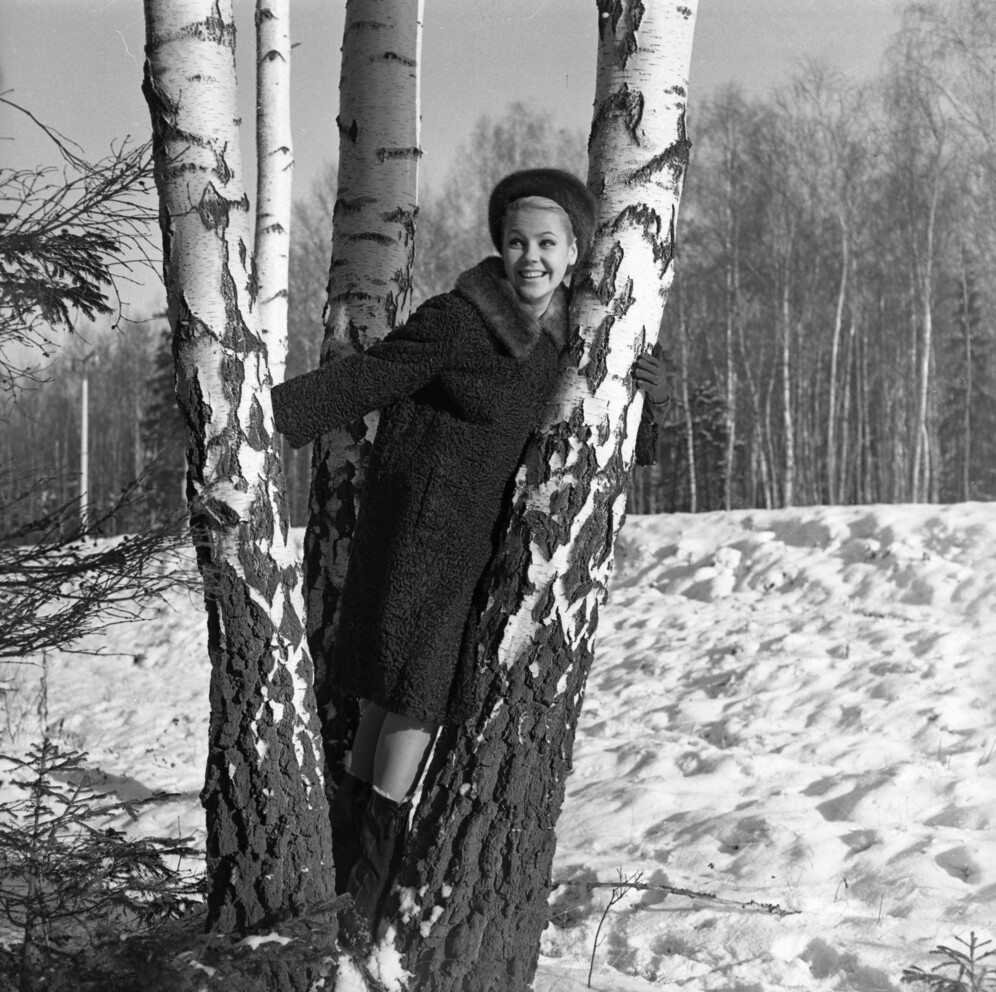 Regina is demonstrating a coat from the Russian fur collection, 1965/RIA NOVOSTI by Alexander Makarov

Officially, the divorce happened after Zbarsky allegedly coerced Regina into having an abortion as he already had a child from his first marriage. However, this version doesn’t sound entirely credible. “I don’t remember Regina getting too excited about motherhood, She was too spoiled and self-centred,” recalls her colleague Valentina Filina. Aya Semynina even remembered in 1967 Zbarskaya chose to have an abortion because a to Montreal and several photoshoots could be put at risk.
In the meantime, Leo Zbarsky had several affairs with Soviet actresses and then emigrated. Regina inherited his apartment, but it didn’t help: her depression was progressing so intensely she ended up in a psychiatric hospital. However, she was so valued she got her old job back.

After her divorce, Regina’s new relationships don’t work out. While other models got married and some even emigrated, she always ended up alone. Which, considering what happened next, was probably not the worst option. 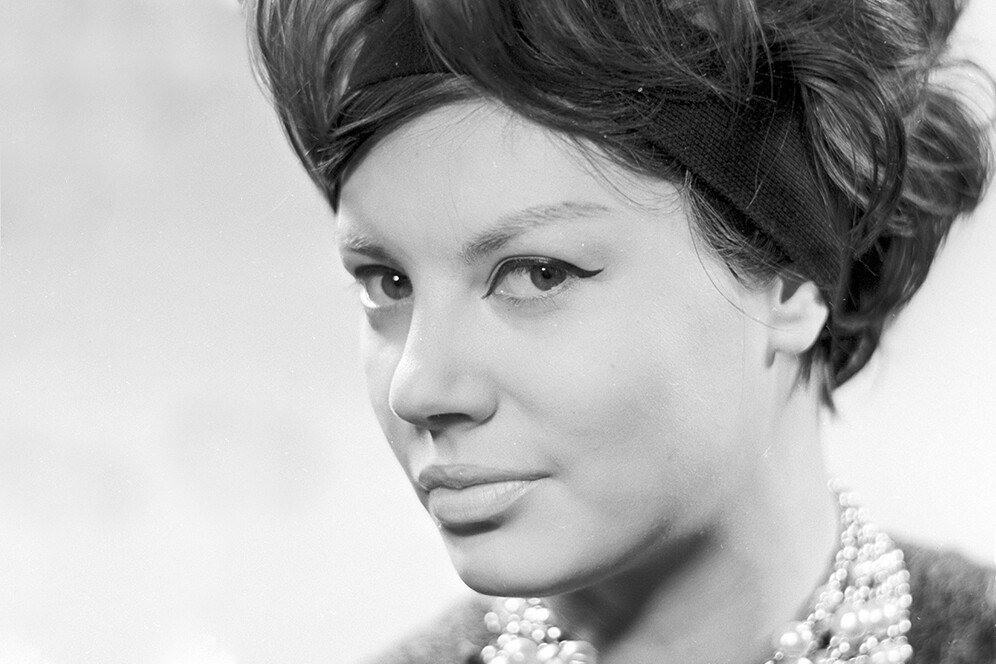 A journalist from Yugoslavia, allegedly one of Regina’s boyfriends, published a scandalous memoir titled “A hundred nights with Regina Zbarskaya”. He very meticulously documented every sordid detail of Regina’s sexual preferences, but, to make things worse, added revelations of her reporting on her colleagues to the KGB and badmouthing the Soviet regime.

The book was published in Germany and shattered the career and already fragile mental state of the ageing model. No one cared if anything written in the book was true; people just found a suitable target to hate and gossip about.

The huge scandal around the book caused Regina to attempt suicide. She was rescued and admitted to an institution again. That was a blow to her reputation. But, lucky for Regina, influential designer Vyacheslav Zaitsev offered her a job at his fashion label. 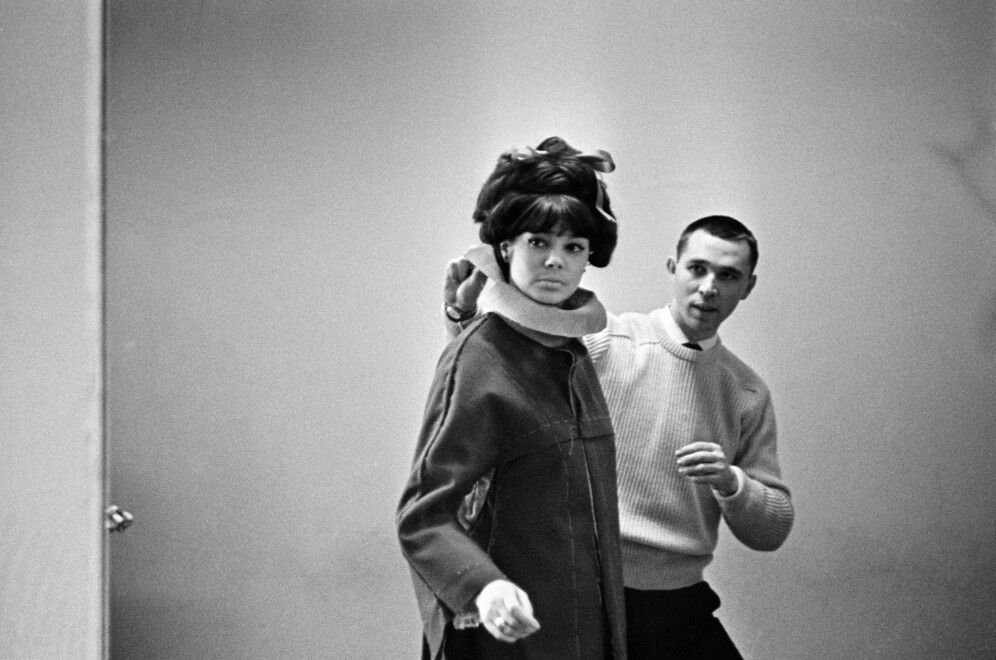 “Zaitsev made her an amazing A-shape coat, black with a taupe collar. This shape was in vogue at that time and besides, was very good on Regina,” says Alexander Sheshunov who worked with Zaitsev. Even in her 40s, after everything she had been through, Regina was still beautiful. She occasionally appeared on the catwalk modelling outfits for older women.

Her life ended in November of 1987. It was her third suicide attempt, and this time it worked. The official version said she dies at the psychiatric hospital, while other sources claim she ended her life at home, with a phone receiver in her hand.