In Case You Have Trouble Finding Us
The Soviet Lady Death: She Shot 309 Nazis, Inspired American Feminists, and Became a Pen Friend of Eleanor Roosevelt

A massive police investigation in the Netherlands uncovered hundreds of cases of underage Nigerian girls being smuggled into Europe and forced into the sex industry. Similar inquiries followed in other European countries. It turned out the girls were tricked into an exploitative system using occult rituals that, according to experts, can be considered a form of psychological violence. RT Documentary sheds light on the case and shares the stories of young girls who have fallen victims of occult traffickers. Tune in the premiere of Voodoo, Money, and Sex Slaves to learn more! It will be on our website soon!

Police in the Netherlands noticed girls who had come to Europe from Africa were disappearing from refugee reception centres. Upon investigation, the police uncovered a criminal organisation that trafficked the girls from Nigeria to Europe. The discovery turned into the most significant trafficking investigation in modern history, known as the Kulvis case. As part of the case, law enforcement officers from the Netherlands, Italy, Spain, France, Germany, Great Britain, and the United States worked together.

“When the girls went to the asylum seeker centres, we gave them a mobile phone, and we wiretapped the phones,” says one of the police officers who took part in the investigation. “And then we found out that they… Yeah, the criminal organisation wanted to contact them, then we laid our hands on the… on the traffickers here in the Netherlands. And then it was like a snowball, because once we had laid our hands on the traffickers, then we could find out who they work with in other European countries, but also in Nigeria.”

Young girls were smuggled from refugee reception centres
As a result of the investigation, over 50 members of the criminal organisation were arrested. The group’s leaders were ready to cooperate and helped the police determine what was going on.

It turned out the organisation worked as a kind of employment abroad agency, promising women from poor African countries like Nigeria work and good earnings in Europe, but, in reality, turning them into sex slaves.

However, when the police started to interrogate the victims, the process slowed down and left most investigators puzzled. Most of the girls were sent from Nigeria to Europe under the spell of voodoo and juju, which was something entirely new for European law enforcement. Moreover, the victims didn’t want to talk because they were afraid to break the voodoo oath.

“You know, they used a chicken…” recalls one of the victims. “The blood and everything, you have to swallow the liver of the chicken—it is part of the process. Me coming to Europe, you don’t have a choice… It’s obligatory; you have to do it.” 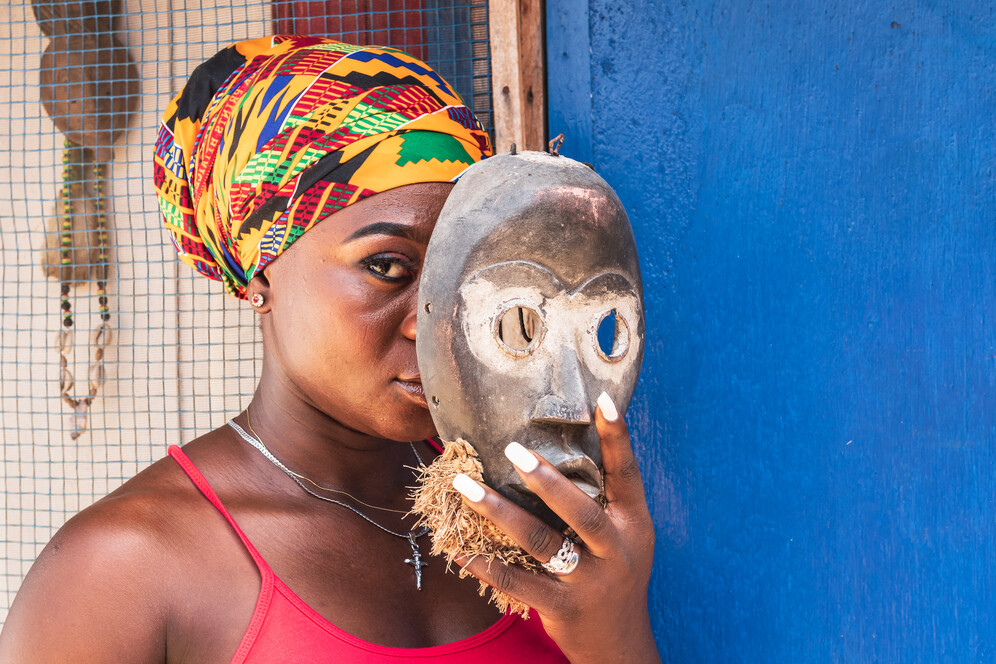 “At first, we thought voodoo… What is this? This is all rubbish, and we don’t believe it!’”, says one of the investigators. “But later on, we understood that it was really something in Africa.”

The girls refused to testify, so the police had to invite a priest from Nigeria to persuade them. But even the priest didn’t turn the tide. Despite his persuasion, and police assurances, only four of the 50 girls agreed to speak for the prosecution, but those testimonies helped bring the case to court. 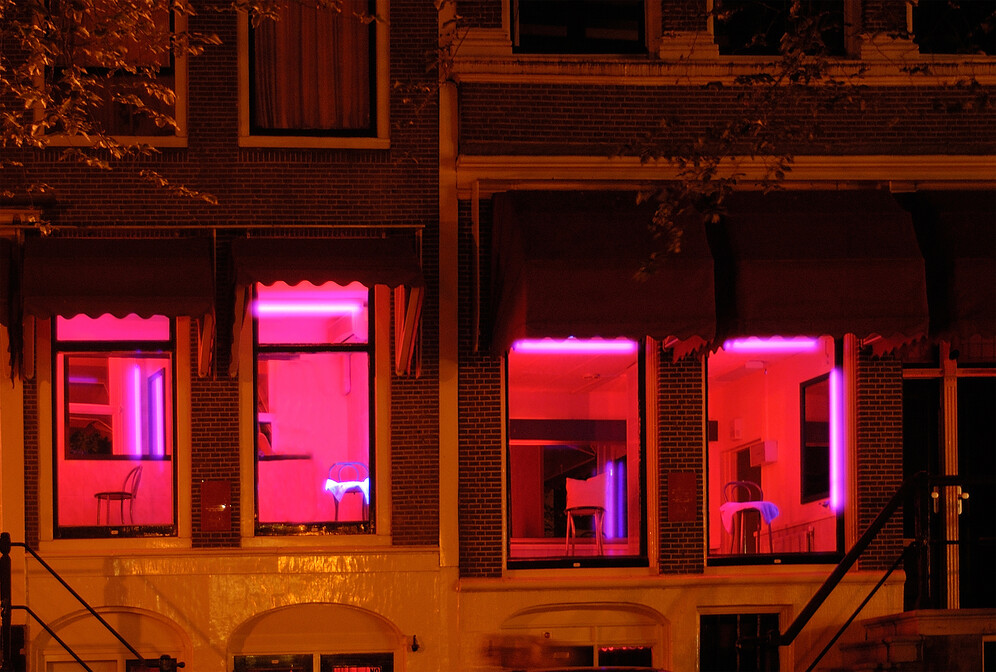 Amsterdam red light district / Getty Images
Prostitution is legal in the Netherlands, but only EU citizens can work in officially sanctioned brothels. They pay taxes and have a union to protect their rights. The girls in the thrall of voodoo can’t work in the red light district.

Most of the voodoo prostitution victims came from poor African countries and left for Europe to provide for their children. Their “employers” tell them they will go to Europe and have a good salary, working as babysitters or hairdressers. They also tell the girls not to worry about the travel and accommodation expenses: all this “can be settled later”. Then the girls go to Libya – one of the transit points, and they start to realise what is going on…

“There were many, so many girls…in my room,” recalls one of the victims. “The room was like a cage. They picked the girl close to me. But nobody suspected that we were to participate in prostitution. I realised it only when the next day they came for me. When I refused to do it, they beat me. They beat me hard. Then they forced me to do it, five men raped me. Five. Five! Five!”

The traffickers offer their potential victims work as a babysitter or hairdresser in Europe
“The first things you understand that again, that was human trafficking. That was the slavery, and they’re the same colour because this time people from Nigeria were enslaving their own compatriots.”

Apart from resorting to physical violence, the traffickers instil in their victims the idea that they can’t break the voodoo oath they have given. Otherwise, they will be cursed.

“You know, it is more or less like psychological violence because these people—they believe in this”, says a nun interviewed by RT Documentary. “Because obviously, the girls, they have no idea that when they come here, the state may help them liberate themselves”. And they are terrified by the idea of being cursed. 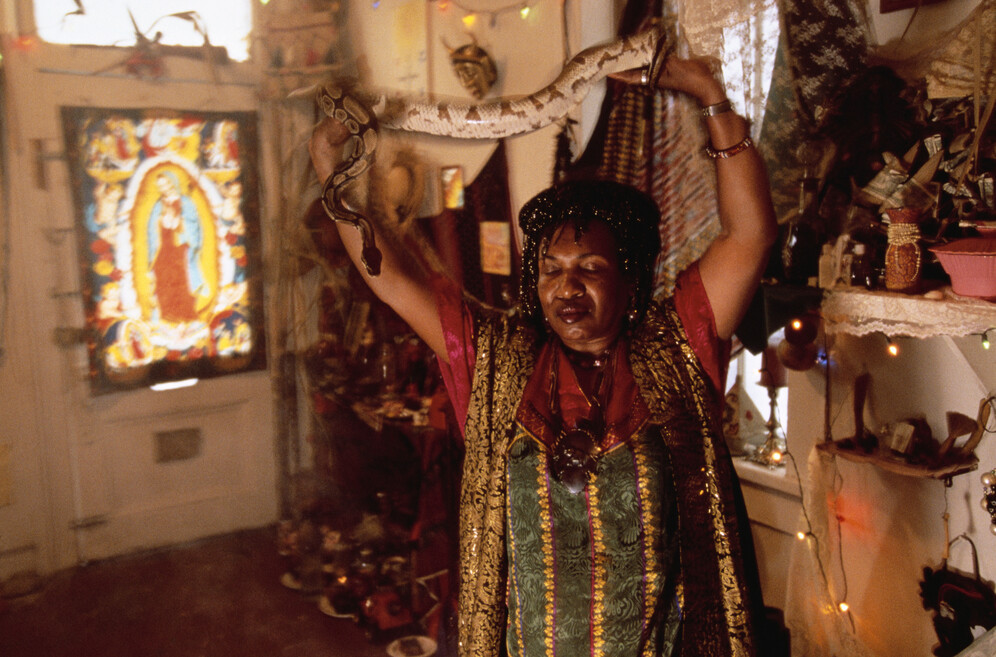 The biggest problem today is that most sex trafficking is conducted online. It is hidden in Telegram groups or direct messages on Instagram or Snapchat. So, uncovering the scale of the industry is complex.

As part of the Kulvis case, 150 arrests were made. However, the case still isn’t closed. The police are still after some of the big fish. They want to execute some of the sentences as some perpetrators still have to stand trial.

Traffickers have been convicted in the Netherlands, France, Ireland, Portugal, Greece, Italy and Germany. But logistics, transit points and countries involved in this underworld business constantly change. So, a lot remains to be done.

The Kulvis case was a great success in dealing with human trafficking, but a lot remains to be done

To learn more about occult human trafficking and to see more hear-breaking stories of its victims, tune in to the premiere of Voodoo, Money, and Sex Slaves! In will be on our website in the near future!