‘This support will change their futures’: European musician starts fundraiser for downtrodden hero of RTD documentary

British bluesman Jim Bruce was deeply moved by RT’s documentary, Congo, My Precious, and started a fundraising campaign to help one of the film’s heroes. Now, a crowdfunding platform is accepting donations to the family of Bernard Buleri, a singer who lost his wife to the Rwandan genocide and has survived a civil war in Congo. This RT article covers the tragic events in the modern history of Africa, and how the life of the film’s hero has changed after the documentary aired. 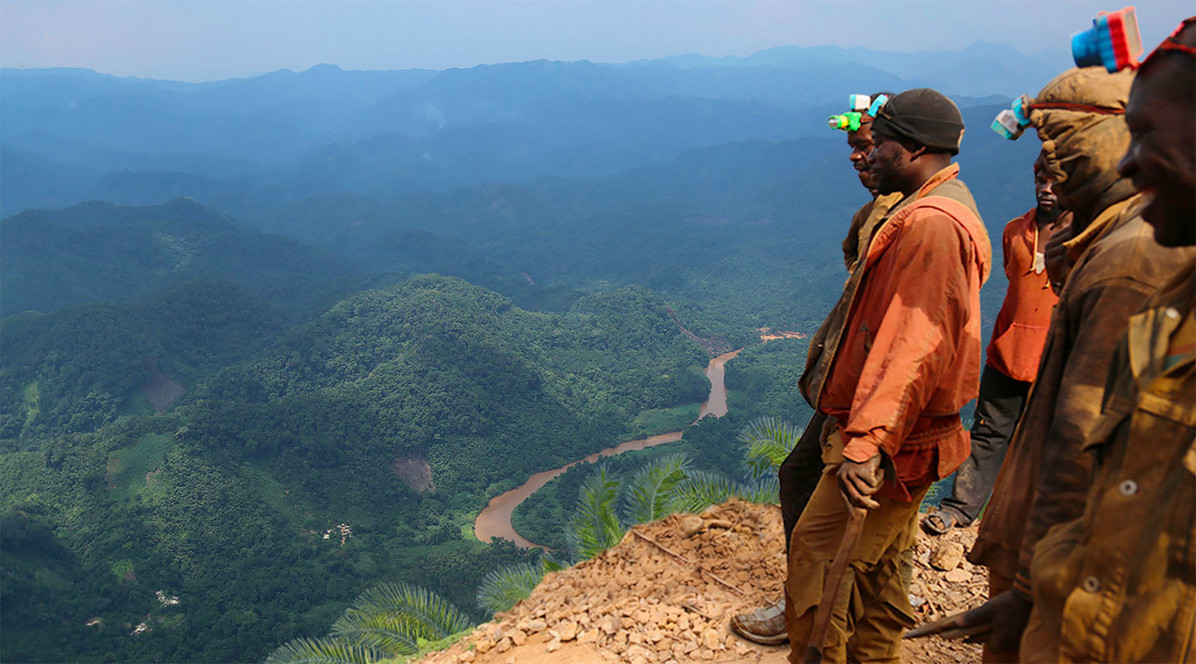 © A still from the documentary film, Congo, My Precious / RT

The life of the documentary, Congo, My Precious, filmed in 2016 has taken a positive turn. On seeing RT’s film, European bluesman Jim Bruce was moved by tragic experiences of the Congolese singer - Bernard Kalume Buleri. Bruce decided to help his fellow musician and started a fundraiser on 10 December. He’s hoping to raise €30,000 on a fundraising platform.

“Your support would not only change his life, but also enable his children to eat correctly and go to school regularly. In this way, today's gift will change lives far into the future. I became aware of Bernard's situation after watching a documentary movie. Although the subject was the state of the coltan mines, his story was a strong feature of the presentation” – Jim Bruce’s message reads.

The musician believes that it is easy to guilt and anger when faced with the truth about the exploitation of the people from developing countries. However, he considers these emotions unhelpful, what’s needed is action. If the fundraising goal is reached, Bernard will be able to buy a truck and start his own, albeit small, business.

Author and director of Congo, My Precious, Anastasia Trofimova, asked the hero of her film whether he knew about the fundraiser. It turned out that the two musicians – the European and the Congolese – had already had a chance to talk and Bernard was very grateful for his colleague’s support. Bernard recently became father to a daughter, whom he named Nastya after the director of the RT film.

It’s not the first time that RT’s work has drawn society’s attention to a pressing issue. For example, after the documentary, Trapped , aired, Welsh pensioner Roger Dunford contacted the family of one of the children featured, first-grader Masha from the Donbass town of Zaitzevo. He accompanied his letters with money transfers to support the family living on the frontline.

Often, highlighting an issue in the media becomes the first step to its solution. For example, after RT aired material about a farmer from the Trans-Urals who found himself on trial for using a GPS tracker to monitor the movement of his calf, the Prosecutor-General’s Office launched a thorough review of all criminal cases initiated under article 138.1 of the Criminal Code of the Russian Federation ("Illicit trafficking of surveillance equipment"), while the State Duma prepared a draft law to decriminalise the household use of such devices. There are many other examples.

“I don't see a solution”

The hero of the documentary, Congo, My Precious,Bernard Buleri, left The Democratic Republic of Congo in the 1980s to search for work in neighbouring Rwanda. There, he formed a band, Sans Frontiere Musica, that quickly became popular. Bernard married a Rwandan woman but their happily-married life was cut short. In 1994, the Tutsi genocide began in Rwanda. In just 100 days, the number of victims reached around 1 million.

Bernard’s wife was a Tutsi. The militants broke into their house and killed her in front of her husband and children.

“We lived together for 8 years before they came to kill her. I was in the sitting room with my kids, showing them how to play guitar. My wife was in the kitchen. Then came four militants, well-armed, with guns. They said, 'We are here to look for the snake that lives here'. When she heard the voices, she thought it was my friends from my music band. She opened the door of the kitchen and one of the guys shouted, 'This is the snake we are looking for!'

And then they said, 'No! Snakes are not meant to be killed with bullets, it’s a loss for us'. Then they started to beat her. And then I paid 5,000 Rwandese francs to kill my wife with bullets. But I couldn't fight, I couldn't do anything. The children were there, I had to take the children in the house” – the musician told RT film director.

Bernard tried to find his wife’s killers and avenge her death, before realising he had to return to normal life for the sake of his children.

“In the end I understood that the hatred you have doesn't destroy the people for whom we have it, but it destroys yourself” – says Bernard.

Upon his return to Congo in 1994, Bernard started working for the UN mission. At that time, war was raging in the country, people were being killed everywhere, but there was nothing the UN mission could do about it. UN workers had observer status in the country, and did nothing to save people even if killings happened 200 meters from the mission, Bernard says. Soon, despite earning a huge salary by local standards, he left the job. 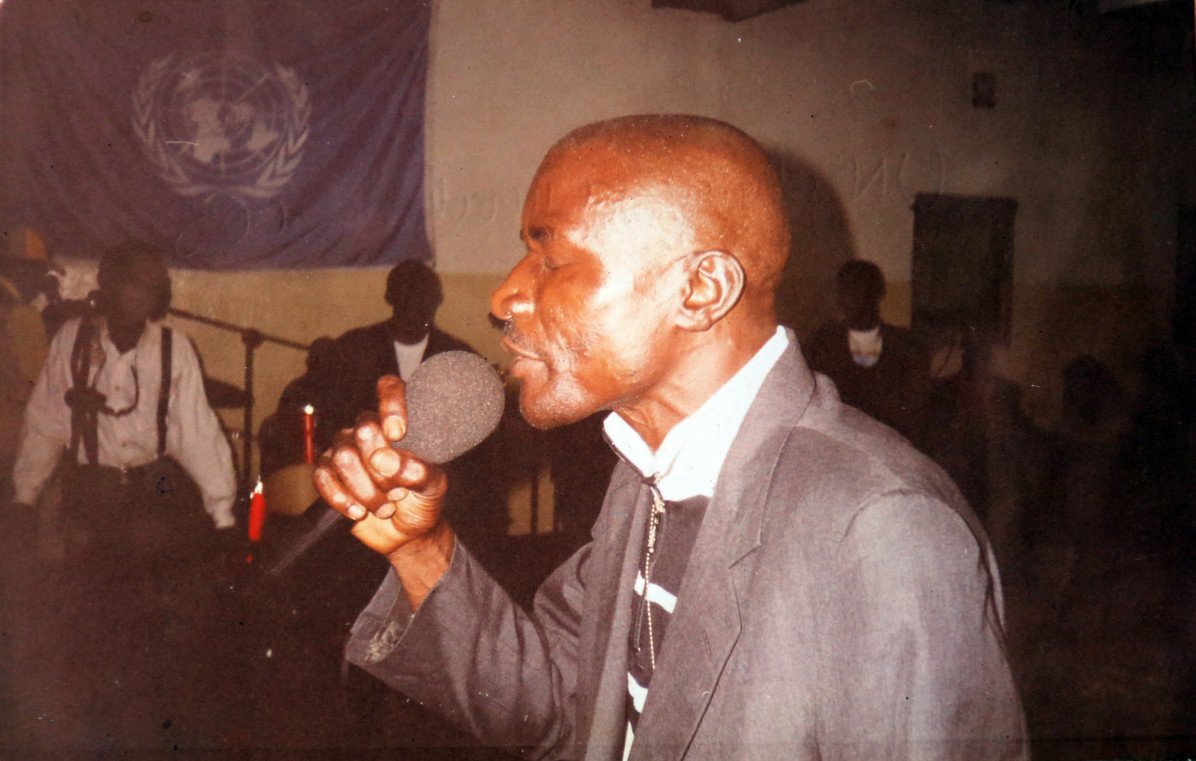 Today, Buleri works as a fixer – he helps foreign journalists by organising accommodation and transportation for film crews in Congo. The pay for this work is very modest and is barely enough to feed Bernard and his family. There are no other jobs in the region and the fundraiser started by European bluesman Jim Bruce is currently their only hope.

Bernard dreams that one day his kids will break the vicious cycle of poverty that almost all citizens of the Republic find themselves in today. Most Congolese in this area work in artisanal mines extracting coltan (a heat-resistant mineral), earning a meagre income for their labour. 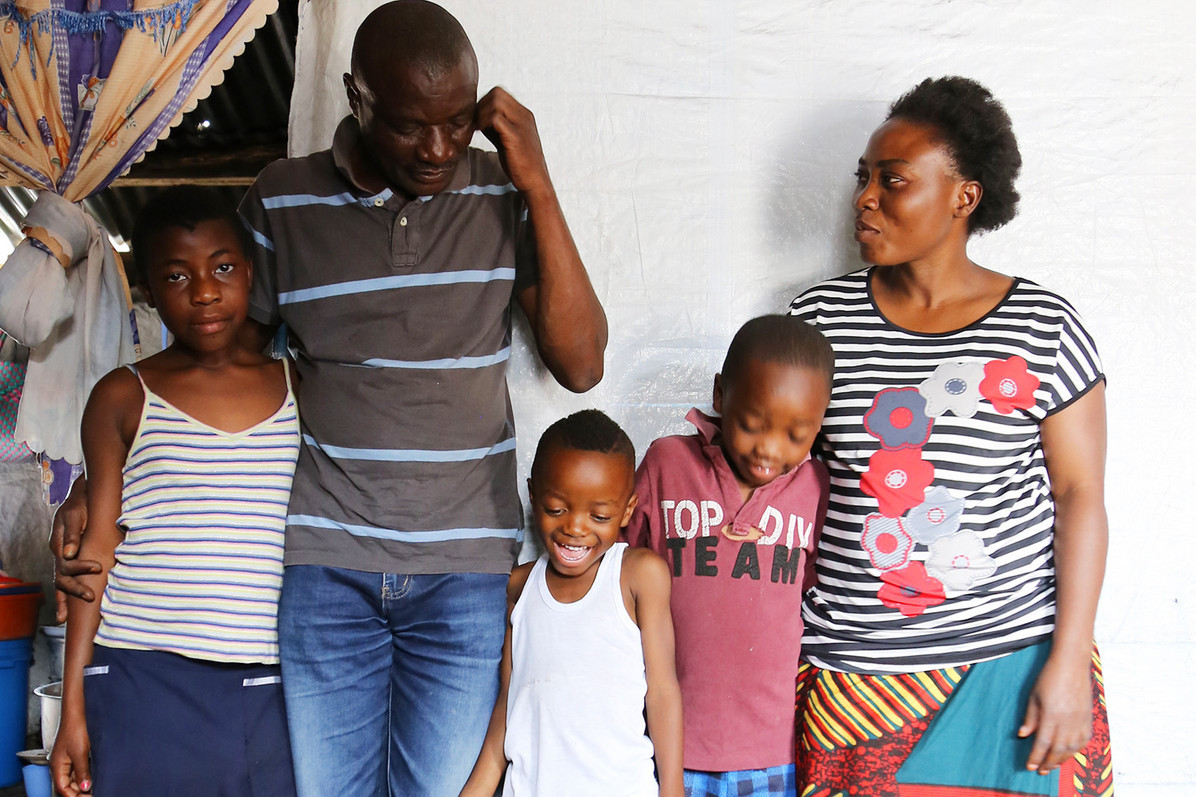 “I can't say that we, the Congolese, are in control of our destiny. No, because the ones who benefit from our minerals are not the local population, but the Western countries who are taking everything. They make themselves rich, while we are getting poorer and poorer. We'll never be powerful enough to challenge the Western countries. So our future will be the future of slaves. And the worst, I don't see a solution, I don't think there is a solution” – Bernard told the director of Congo, My Precious.

The torment of Tantalus (The curse of coltan)

Coltan (tantalite) is a valuable ore from which tantalum is extracted. This element is used in a wide range of areas – from heat-resistant alloys to surgical equipment. Tantalum’s unique properties make it indispensable in the production of electronics and radio equipment.

There are considerable deposits of tantalite in Germany, the US, Sweden, Egypt and Saudi Arabia. The biggest concentration of the known reserves, however, is found in Africa, chiefly the Democratic Republic of Congo. The country’s natural riches have become a real curse.

At the end of the XIX century, the King of Belgium, Leopold II, founded the International Association for the Exploration and Civilization of Central Africa. European envoys were sent to the region to force leonine contracts upon local elites, which made the territory dependent on the Belgian monarchy. As a result, in 1908 Congo became a Belgian colony. Belgians cut off the hands of Congolese people for not fulfilling mining plans © A still from the documentary film, Congo, My Precious / RT

After WWII, the country saw the rise of trade unions and political movements. A prominent anticolonial public figure of the time was Patrice Lumumba, who became the first Prime Minister of Congo after the country proclaimed its independence in 1960. Lumumba’s policy was opposed to by pro-Western forces, and as a result he was arrested and killed soon after. The country succumbed to a civil war, ended by the tough dictatorship of Mobutu. With the fall of his regime in 1997, a sectarian conflict once again flared in Congo, lasting for nearly 5 years. In addition to inter-ethnic tensions, experts have identified mineral deposits as a cause of the war. 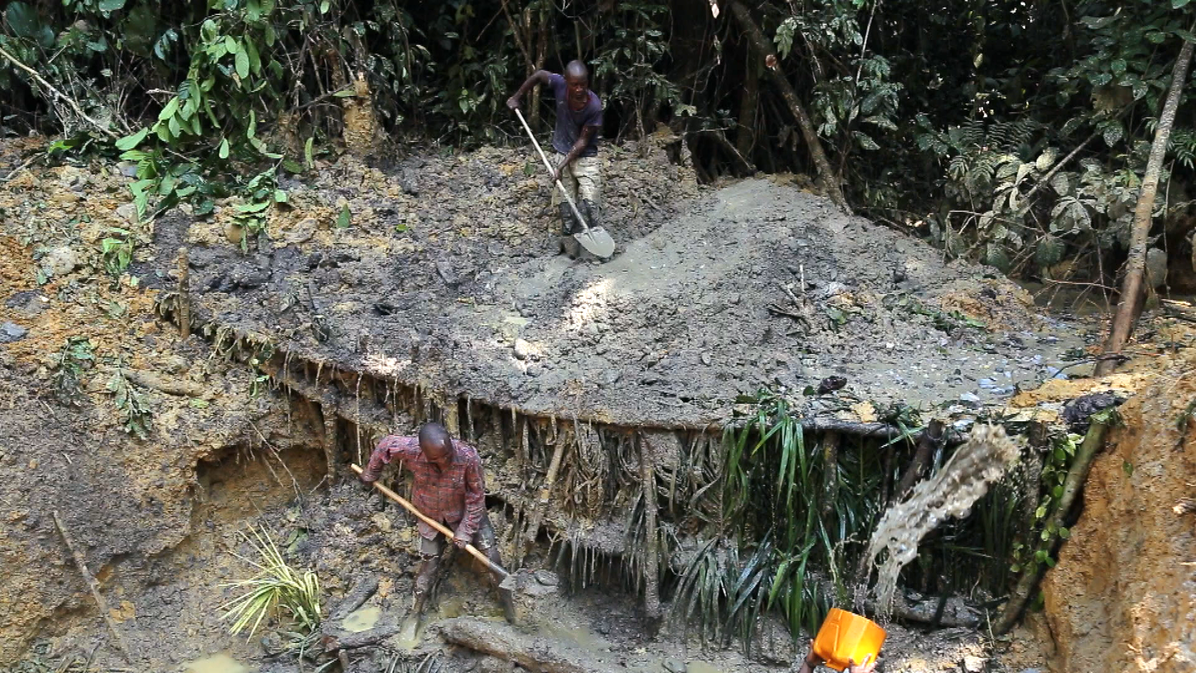 Today, the population of the DRC endures exceptionally harsh conditions. The country sets new records in unemployment – according to CIA World Factbook data, in 2016 the rate reached 53%. Many have to tolerate inhuman working conditions to survive. Mining is done manually – people dig tunnels many meters into the ground with no health and safety equipment. A kilo of coltan brings workers around $3, while its market price is at least $100. The extracted raw materials are transported to the port town of Bukavu on the coast, from where they are exported.

The locals told the RT film crew that they had almost abandoned all hope.

“The pursuit of excess profits sets the rules. It is easier for the owners to spend money on security services than to develop their production and raise salaries. The conditions the coltan miners face are no different from, for example, that of opium collectors in Afghanistan. In essence, it’s modern slavery: although people choose to do this work, they just don’t have any other option”, — South Africa expert, Aleksandr Zdanevich, told RT in an interview.

The locals are not wrong to place the blame for their dire situation on Western countries, the expert believes. After all, it is Western corporations who buy coltan, albeit through middlemen. One way or another, it is they who set the tone, the price, and the rules of the game in this area. At the same time, the Congolese don’t see any real support from the West. 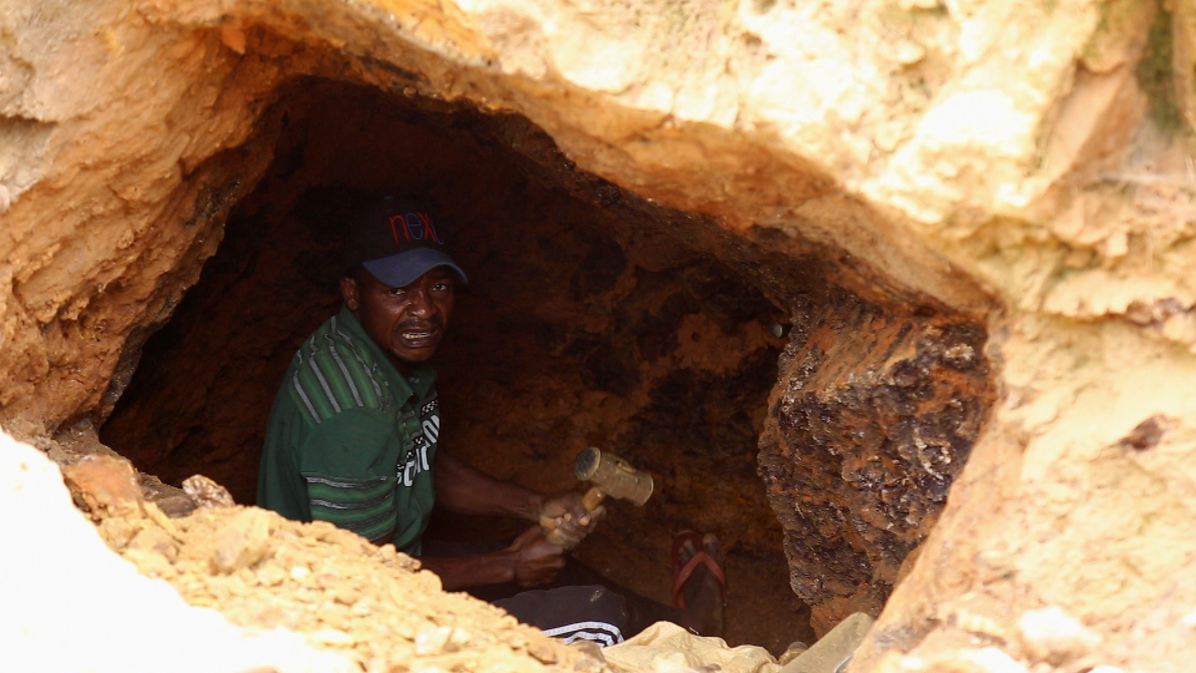 “Unfortunately, although the West likes to talk about the plight of Africa, it doesn’t lead to actual aid. Nobody goes to Africa to solve problems at the local level. If help is provided at all, it is done in the form of financial aid that never reaches ordinary people”, — Zdanevich concludes.

Watch the documentary, Congo, my Precious, on RTD website.