Nenets: Keepers of the Land
Traditional life under threat for Iraq’s Marsh Arabs

An opioid crisis gripping the United States has been likened to plague because of the high death toll in its wake. According to data from the Center for Disease Control and Prevention, more than 176,600 Americans died between 2013 and 2017 from an opioid-related overdose. The epidemic continues to claim more than 130 lives every day. These days, statistics suggest that Americans are more likely to die from an opioid overdose than a car accident. So, what is it that's killing America?

An "opioid" is a substance that binds to opioid receptors in the body; this includes a broad spectrum ranging from legally prescribed pills to street drugs like heroin and fentanyl. Anyone who's ever seen House MD and commiserated with the addiction-ridden super-doctor will remember a drug called Vicodin. It is just one of many prescription drugs that have become household names since the opioid abuse crisis first struck the United States.

In the 1990s, pharmaceutical companies began aggressive marketing campaigns pushing a new class of opioid pill. The main selling point was that a patient's pain should be considered "the fifth vital sign", along with temperature, blood pressure, respiration and heart rate, and had to be treated more seriously. Unlike blood pressure or heart rate, though, pain cannot be measured objectively, each patient evaluates his or her pain levels according to their individual threshold. The doctor then prescribes appropriate medication. Such a patient-centred approach sounds great, except for one serious flaw; doctors were encouraged to prescribe new-generation opioids without really considering that they might be doing more harm than good. That includes OxyContin (a slow-release oxycodone preparation) launched by Purdue Pharma and given to patients with all types of pain.

Cataldo Ambulance medics and other first responders revive a 32-year-old man who was found unresponsive and not breathing after an opioid overdose on a sidewalk in the Boston suburb of Everett, Massachusetts, U.S. © Brian Snyder / Reuters

Why so? Opioids tended to be reserved for severe post-op pain or terminal conditions where their benefit outweighed the problem of chemical dependency. However, in their initial marketing materials, pharmaceutical companies stated that the new drugs were, unlike previous opioid drugs, virtually non-addictive. They are, in fact, chemically similar to heroin, one of the most habit-forming drugs there is.

The promotional campaigns targeted healthcare professionals and hospitals all over the country and were so successful that OxyContin sales rocketed from 48 million in 1996 to over 1 billion dollars in 2000. 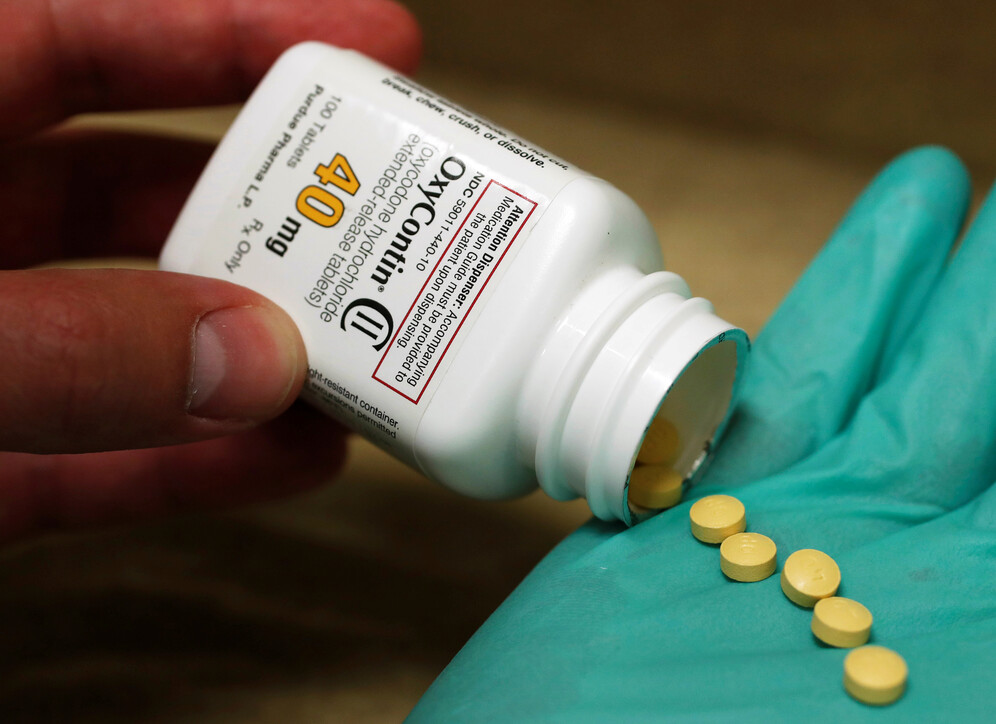 Purdue trained its sales representatives to drive home the message that with Oxy, the risk of addiction was "less than one per cent", a blatant misrepresentation of various clinical studies and a classic example of elaborate cherry-picking and data juggling. That approach cost Purdue dearly: in 2007 the company pleaded guilty to falsely claiming that its blockbuster drug was less addictive than other opioids and had to pay 634 million dollars in fines.

But it wasn't nearly as costly to Purdue as it was to the nation. Thousands of people had become fully-fledged addicts, unable to function without their "magic pill". As their prescriptions ran out, or they felt that they needed something stronger, former patients would turn to illegal drugs that were cheaper and easier to come by. The National Institute of Drug Abuse reports that nearly 80% of current heroin users started on prescription opioids. As a result, over the past 20 years, deaths caused by heroin overdose increased a staggering sevenfold.

If that doesn't paint a sufficiently gruesome picture, perhaps this will: in 2017 alone, more people in the US died from an opioid overdose than from AIDS-related illnesses at the height of the AIDS epidemic in the '80s. Since 2015, life expectancy in the US has been on a steady decline. The fall isn't particularly dramatic; 78.8 years in 2014 compared to 78.6 in 2017, but the last similar drop was after WWI and counted numerous deaths in combat. With no significant war, this fall in life-expectancy is blamed mainly on opioid-related overdoses and suicides. It is no exaggeration to describe whatever is happening as an epidemic.

The crisis has left no US region untouched but has hit some communities harder than others. According to a recent federal report, the country's northeast has become a national epidemic hot-spot with 22.5 deaths per 100 thousand people. West Virginia, Ohio, Kentucky and New Hampshire are among the states with the highest prescription rates. They also suffered the most in the unfolding financial crisis through reduced productivity, lost wages, higher criminal justice expenses and health care costs. Six states, Alaska, Arizona, Florida, Maryland, Massachusetts, and Virginia, have gone as far as to declare health emergencies.

A needle used for shooting heroin and other opioids litters the ground in a park in the Kensington section of Philadelphia, Pennsylvania. © Charles Mostoller / Reuters

Currently, the US faces the need to tackle the crisis on two fronts; to discourage overprescription of opioid medication, and to fight illicit opioid drugs. Doctors are under pressure to improve the way they assess patients, their need for pain medication and likely susceptibility to addiction. Meanwhile, pharmaceutical manufacturers and distributors may face the full legal consequences of what many people say, was pure greed.

The first legal battles have only just begun in what promises to be a very long process of determining who is to blame and then making them pay. Nearly 3,000 lawsuits, filed by states, cities and counties against manufacturers, physicians and pharmacy chains, now form a consolidated federal case known as the National Prescription Opiate Litigation. October saw the first series of settlements between distributors AmerisourceBergen, Cardinal Health and McKesson, and two Ohio counties that had accused the companies of stirring the US opioid crisis.

AmerisourceBergen agreed to pay 215 million dollars, while another manufacturer, Teva Pharmaceuticals, will pay 20 million in cash and an additional 25 million in addiction and overdose treatment drugs. Johnson & Johnson, Mallinckrodt, Endo International and Allergan, which are among the earliest Opioid producers, also opted to settle rather than go to trial. These agreements were the opening skirmishes in a legal "war" to be waged in the federal court between local governments and big pharma. 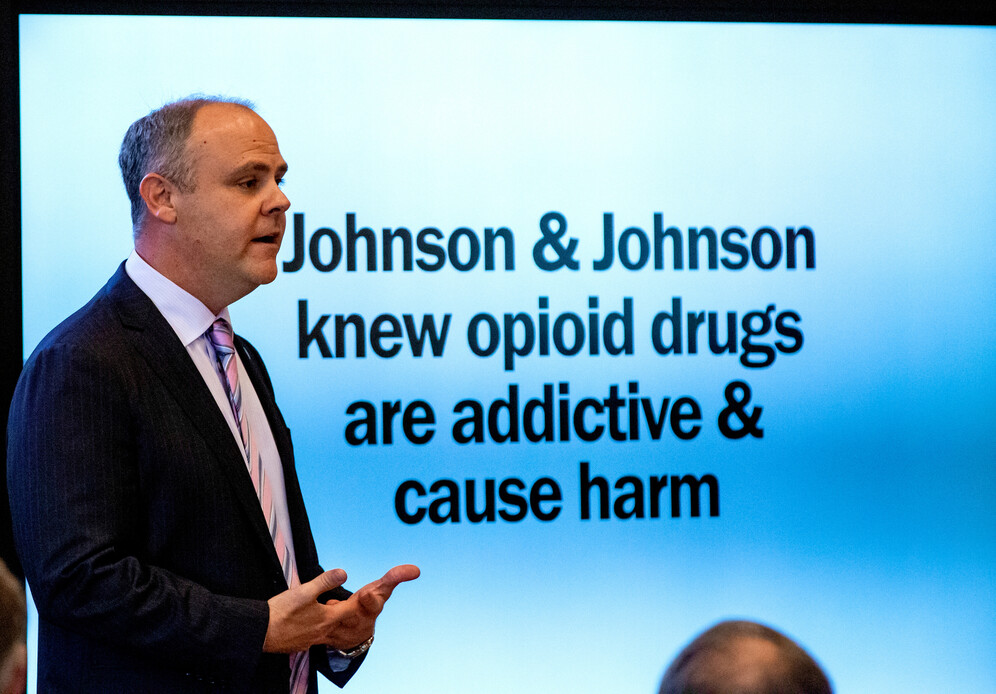 Defense attorney Larry Ottaway speaks during opening arguments on the first day of a trial of Johnson & Johnson over claims they engaged in deceptive marketing that contributed to the national opioid epidemic. © Sue Ogrocki / Reuters

Purdue Pharma was a primary defendant in the case until it filed for bankruptcy, thereby putting any lawsuits against it on hold. The move was part of an agreement that it would provide nearly 10 billion dollars in settlements, dissolve and reform. Although the majority of plaintiffs are in favour of the deal, many still oppose it, claiming that the amounts promised won't even begin to cover the costs of resolving the opioid crisis. Pennsylvania's Attorney General, Josh Shapiro, called the settlement "a slap in the face to everyone who has had to bury a loved one due to this [the Sackler] family's destruction and greed".

According to the US Center for Disease Control and Prevention, between 2013 and 2016, deaths from overdosing on fentanyl and its derivatives increased by 88% per year.

On the flip side of the crisis, there are illicit drugs that improved guidelines and more stringent regulations cannot reach. Fentanyl, a potent synthetic opioid, presents an even greater danger than heroine. Some drug dealers are known to boost profits by lacing heroin with fentanyl for potency, which in turn leads to overdosing. According to the US Center for Disease Control and Prevention, between 2013 and 2016, deaths from overdosing on fentanyl and its derivatives increased by 88% per year. There were even rumours that the American musicians Prince and Tom Petty were among the victims.

Fentanyl has been such a severe cause for concern that it became a stumbling block in the US-China trade deal after President Donald Trump blamed China for flooding the country with the deadly substance. China initially retorted that the US "only has itself to blame", but last month, after a year of dialogue, it reported a crackdown on a group of fentanyl smugglers in a joint operation between US and Chinese authorities.

Hopefully, these measures and changed attitudes will help curb the epidemic caused by big pharma's greed, lapses in medical judgement and lack of awareness among patients. Authorities cite a slight decline in opioid prescriptions over the past few years as a move in the right direction, even so, according to United Nations statistics, US doctors still prescribe 5.5 times more opioids than physicians in France and 8 times more than in Italy. 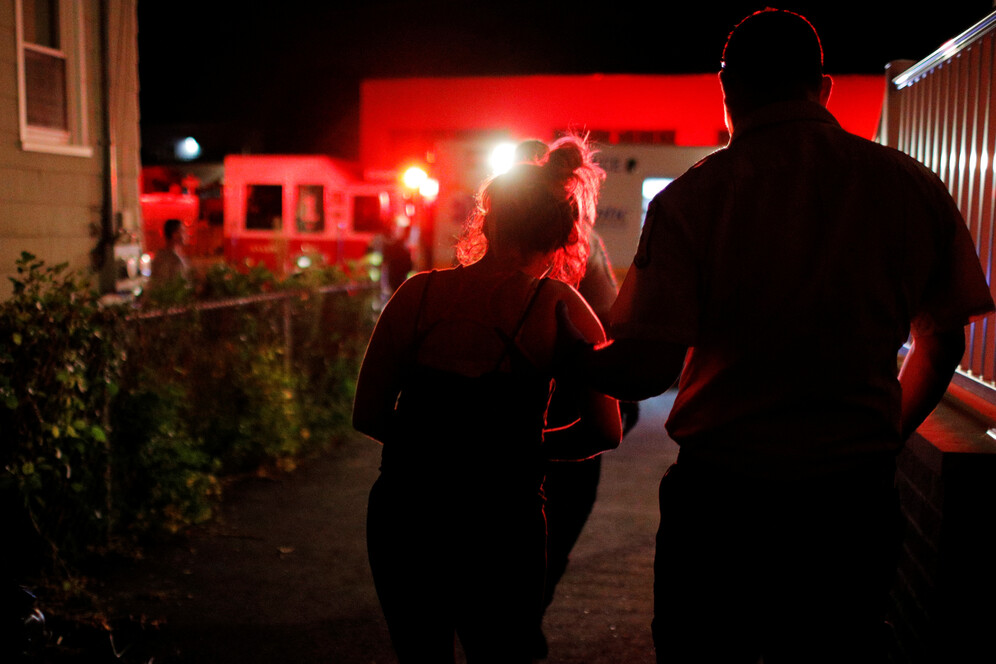 A Cataldo Ambulance medic escorts a 39-year-old woman to an ambulance after she was revived from an opioid overdose in a home in the Boston suburb of Salem, Massachusetts. © Brian Snyder / Reuters 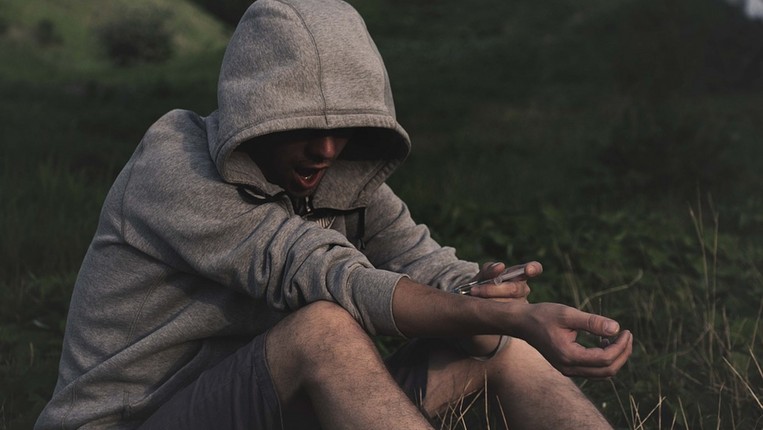 According to Keith Humphreys, professor of psychiatry at Stanford University, the problem is rooted in a difference in mindset and approach to problem-solving. In his piece for the Washington Post, he writes: "Relative to Europeans, Americans have more faith that life is perfectible (e.g., all pain can be avoided). Consider, for example, a 55-year-old who feels acute back and leg pain after doing the workout that was easy when he was 25. A European in this situation might reflect sadly that ageing and physical decay must be accepted as part of life, but an achy American might demand that his doctor fix what he sees as an avoidable problem by prescribing him opioids." If that is the case, the endless pursuit of a magic pill may never end.

While prescribing less will reduce the number of people who become chemically dependent on opioids, too many restrictions might deny opioids to patients who really do need and benefit from them.