Twenty-five years ago, in August 1995 the Russian crew of an IL-76 transport flying ammunition to the Afghan government was captured by the Taliban. They spent a year held in the city of Kandahar. When there remained no hope for salvation, the desperate crew made a daring attempt to escape — they hijacked their plane and made their way home. This is how their heroic getaway was made possible.

The plane was on a flight from Tirana, Albania to Kabul, Afghanistan. The Il-76 belonged to a private Russian airline called Aerostan. The seven crew members on board were Captain Vladimir Sharpatov, co-pilot Gazinur Khairullin, navigator Alexander Zdor, flight operator Yuri Vshivtsev, and flight engineers Askhat Abbyazov, Sergei Butuzov and Viktor Ryazantsev. It wasn’t their first flight to Kabul, so at first, everything was as usual. 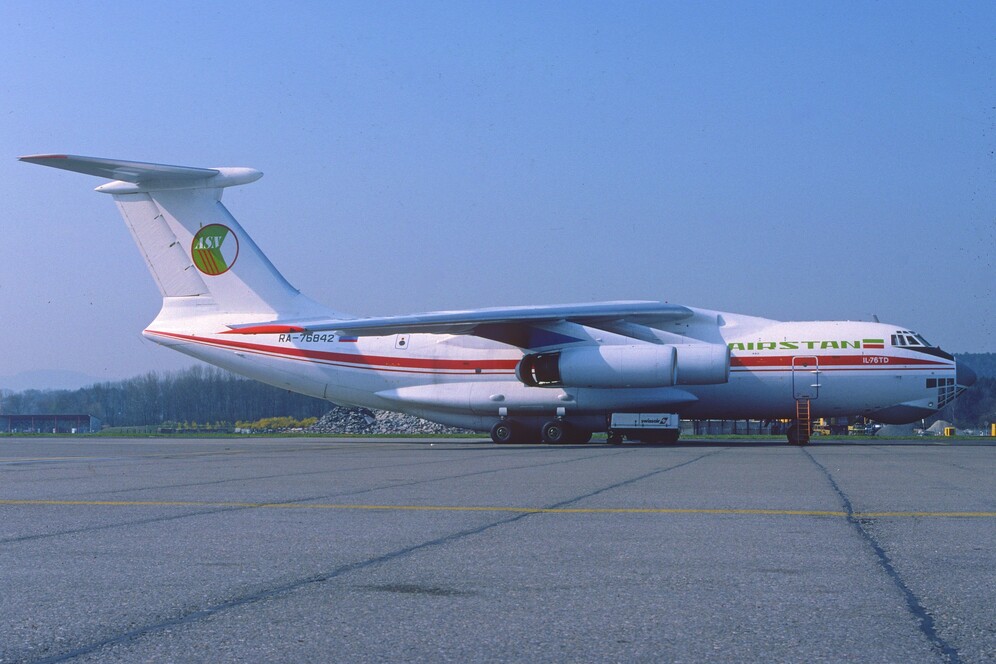 It had been rented out by an UAE company and the crew had regularly performed freight flights to Afghanistan. On August 3, 1995 the aircraft was transporting ammunition. The cargo complied with the standards of the International Civil Aviation Organization (ICAO) and was allowed for air transportation/Aero Ecarus via Flickr

But over Afghanistan, the aircraft was intercepted by a MIG-21 fighter belonging to the Taliban. The crew was forced to land at Kandahar airport and detained in the outbuilding of the governor’s house. The Taliban accused the crew and the Russian government of interfering into Afghan domestic affairs.

The crew would spend 378 days in captivity — in the burning Afghan heat, without clean clothes and suffering from an acute shortage of water.  They lived in an outbuilding of the governor’s house, four men in one back room and three in another. Most of the time, they slept on the bare floor. The unsanitary conditions and the food provided made many of them ill. Captain Vladimir Sharpatov developed a stomach ulcer and jaundice.

The “prison” was an entertainment for the locals who would visit as if they were watching captive animals at a zoo. Some of them were merely interested to see the “exotic” Russian hostages. Others came to express their outrage. The local Imam was a frequent visitor and talked with the crew and brought them religious books in an attempt to convert them to Islam. 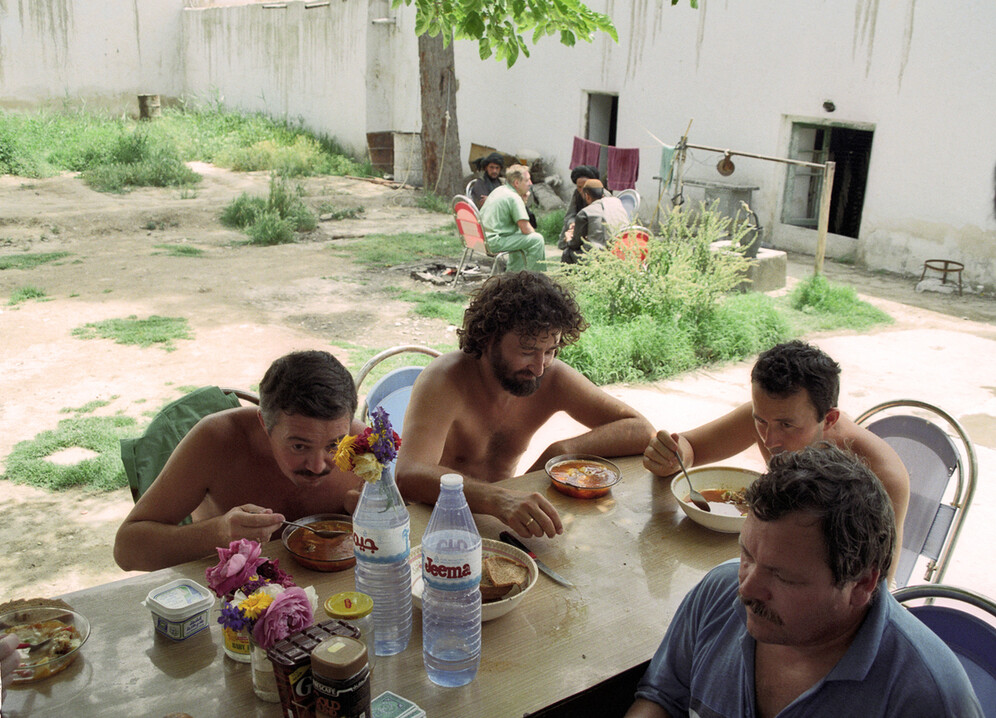 In the foreground – the crew having lunch. In the distance – a Russian doctor giving medical advice to the locals/Credit Vladimir Melnik

The crew communicated with locals with the help of a translator, Abdul Razak. Vladimir Sharpatov told a funny story about the translator. One day an official visiting the crew in captivity brought alcohol and bacon. Abdul Razak, who was meant to be a good Muslim, secretly asked for the treat. And he liked the bacon! According to Taliban laws, he could be sent to prison for such a prank. But the crew didn’t turn him in. 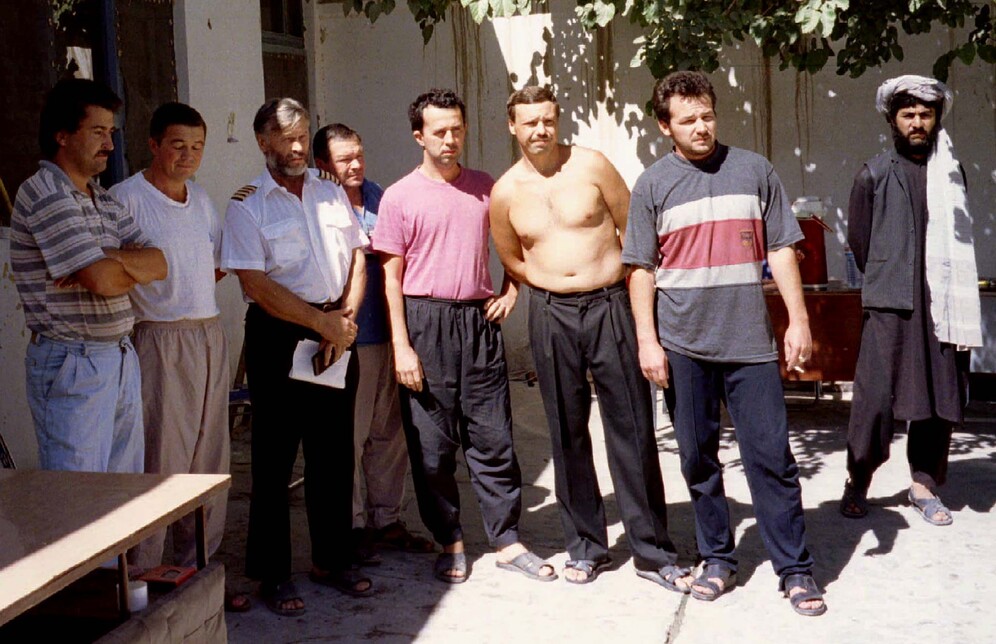 The co-pilot Gazinur Khairullin says the unknown was the most challenging thing in captivity. Even criminals in prison have some certainty — at least they know the date of their release. The Russian crew didn’t have an exact “term in prison”, it could end any day... And their lives as well/REUTERS file photo

One night the captives were taken to an abandoned weaving factory without explanation. The crew’s nerves were stretched to breaking point. They thought they would be killed. It turned out the Taliban were trying to hide the hostages after reports of a massive government offensive appeared in the press.

Playing cards was one of the primary means of entertainment in captivity. According to Vladimir Sharpatov, the Taliban guards would become pretty angry every time they saw the queen card. Her bare shoulders outraged the strict Muslims. Still, the crew refused to dress the queen in a chador. 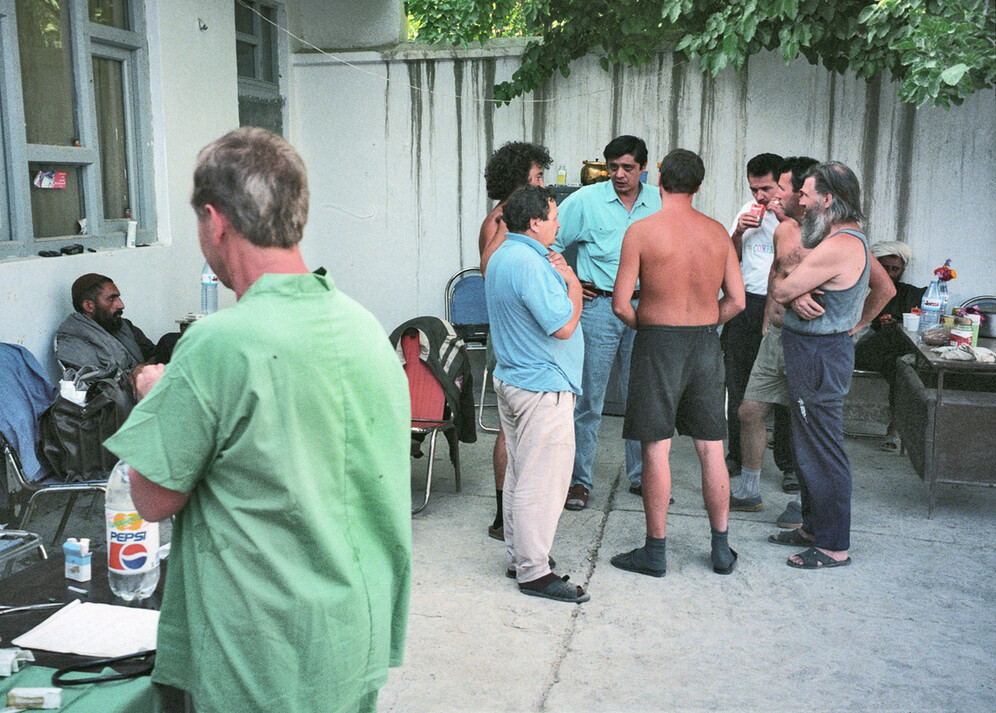 Numerous attempts to release the crew were made by Russia, the UN, the Organisation of the Islamic Conference and the United States, but all of them failed. Russian officials tried to exchange the hostages for KAMAZ trucks, helicopters, spare parts for the aircraft and cash. But the Taliban were, again and again, raising the price, the crew served as their trump card.

No other way out

Months after their capture, the crew members realised a daring escape was their only option. Step by step, they started to persuade the Taliban the aircraft needed regular maintenance. The Afghans knew the Il-76 cost tens of millions of dollars. Thus, they allowed maintenance work to preserve the machine for their purposes.

On August 16, 1996, all seven members of the crew were taken to the Kandahar airfield. It was Friday — the day Muslims devote to prayer. There were fewer guards and far less vigilant than usual. The Russians took their chance.

The plane took off even though the runway was too short for such a big plane as the Il-76. The airfield guards could do nothing but watch the plane go. Meanwhile, the crew disarmed and tied up the guards that were inside the plane/Kandahar Airfield/By Lt. Kristine Volk

They flew toward the Iranian border, hedgehopping their way at an altitude of 100 metres. All radio navigation aids were turned off so the Taliban could not track them. The risk was immense. Nevertheless, after crossing the Iranian border, the plane gained altitude and eventually landed Sharjah in the United Arab Emirates.

When Captain Sharpatov leaned out of the window at Sharjah airport, he was mistaken for a member of the Taliban because of his heavy beard.

After the landing, the Taliban guards were handed over to the police. The crew was finally free, safe and sound. On August 22, 1996, the captain and co-pilot were awarded the title of Hero of Russia, and the other crew members received the Order of Courage.

The heroic escape became an inspiration for an action film which was released in 2010.