ARRAY(0x5623b9e6beb8)
Welcome to Molyobka, Ufologists' Heaven
The End of Privacy

Modern-day video games have long become a match for Hollywood in terms of their quality, outreach, and expenses. In 2020, the number of video gamers worldwide has reached 2.7 billion, which is over a third of the world’s population. Professional video gamers compare themselves to professional sportsmen: they train from dusk till dawn, participate in national and international tournaments with award funds that make conventional sportsmen jealous. RT Documentary explains what life of a video gamer looks like. Don’t forget to see the premiere of Esport. Tapping for Glory on Wednesday to learn more! 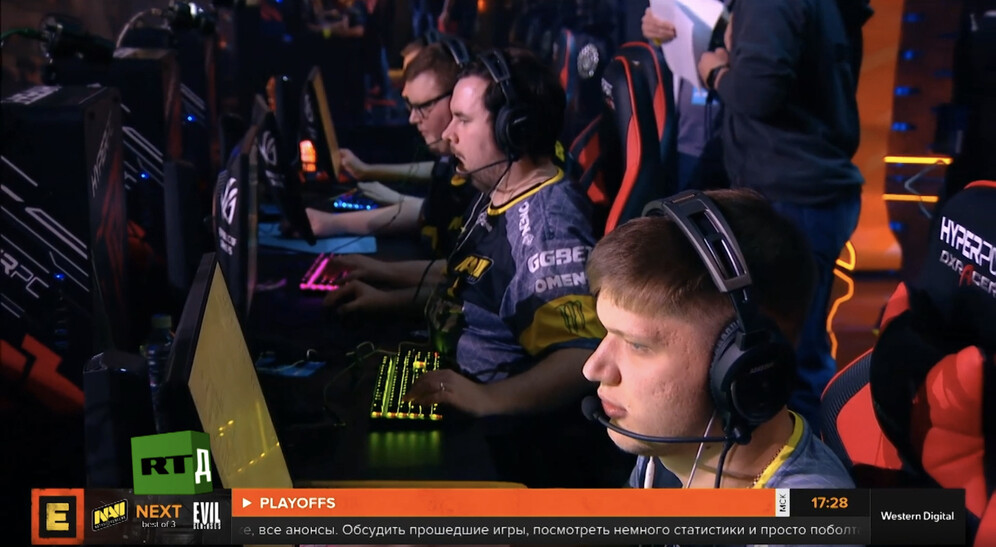 In 2020, the number of video gamers worldwide has reached 2.7 billion, that is over a third of the world’s population

“For almost all of my life... I’m 38 years old now, and, at least, 25 of them, I’ve spent telling everyone that there’s nothing wrong with playing games,” says Evgeny Peckach, the author of the first Russian gaming series.  “For me, games are more than just a way to kill some time.”

What comes to your mind when you hear the word “cyber sportsmen”? A teenager with red eyes and filthy hair sitting in front of their computer day and night? Well, even if this paragon of a video gamer might have been true twenty years ago, it has nothing to do with modern gaming.

Over the years video gaming has turned from a dubious hobby into a high-paying occupation, allowing people to make thousands of dollars over a weekend. With prize pools at international tournaments reaching a million dollars, an increasing number of amateurs seek to become professional gamers.

However, as with any high-paying job, professional video gaming seems to be extremely demanding. To make it a goldmine, one must be gifted and quick-witted. Millions play. Tens of thousands try to achieve something. But only a few succeed.

“There are both intellectual and physical components to every sport,” says Dmitry Smith, president of the Russian Cyber Sport federation. “Yes, I guess we don’t run or jump. We spend most of our time sitting. But. There’s such metric as ‘operations per minute.’ And in the case of a professional athlete, it can go as high as 400 units. It means they consciously press a key or mouse button 400 times per minute. And they do while coordinating their actions with the rest of the team. We did research. We looked at how an athlete’s body performs while they’re on the stage. We took sensors, put them on an athlete, and kept track of all their vitals remotely. And if you look at the resources the body mobilised, one can compare it with those of a 100-metre runner or Formula One driver.” 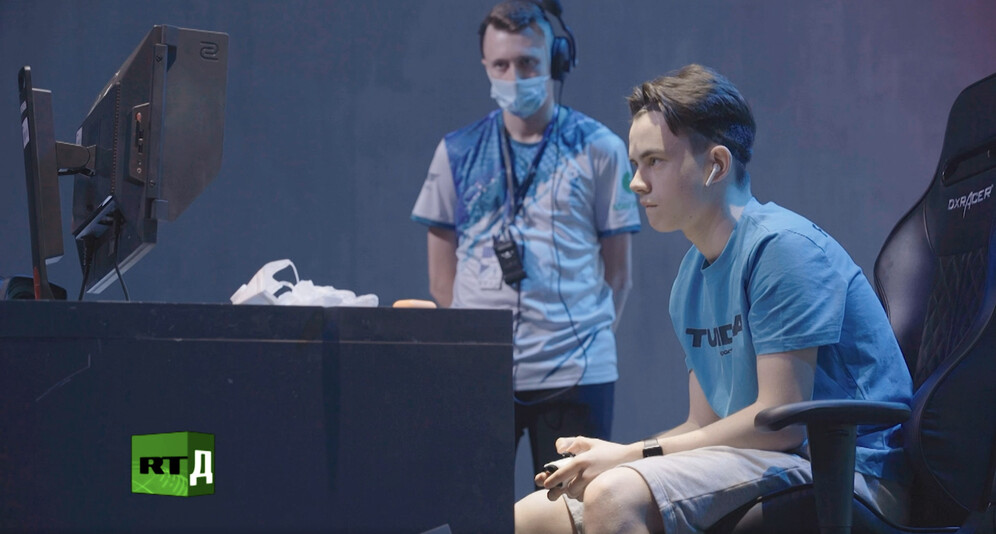 How did it all start?

“The starting point, when esports grew out of its sandbox, out of small-scale gatherings and became a really big thing, a widespread phenomenon was the year 2011,” says Yaroslav Kuznetsov. “That’s when the first international Dota 2 tournament International was held. And the prize pool wasn’t meagre $50,000 anymore. All of a sudden, it was $1.6 million at stake at that tournament. And that was when people started talking about esports differently. It was… a breakthrough.” 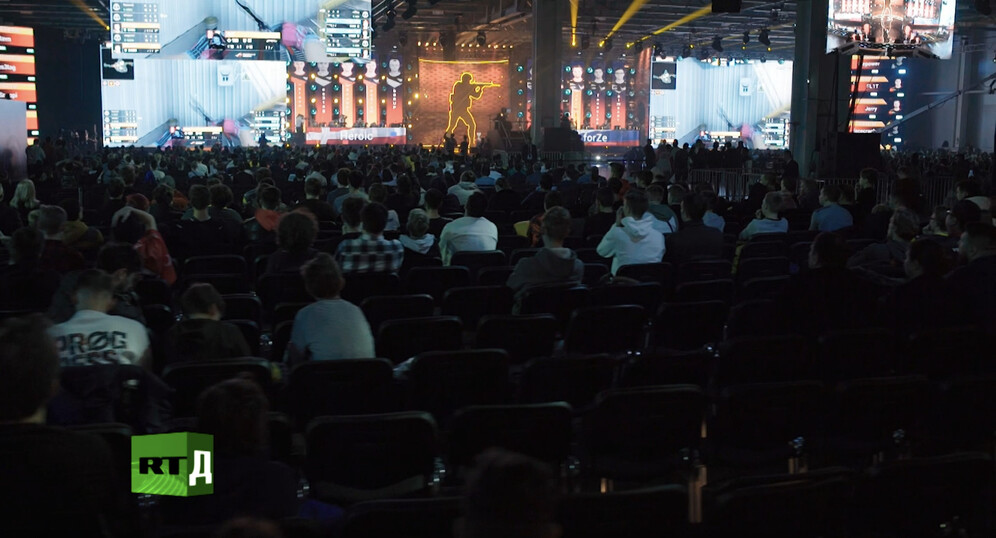 The first Dota 2 international tournament was held in 2011

Today an international video gaming tournament is a major event that draws millions of people of all ages. In the 1990s, gaming competitions were nothing like that. It all started with primitive arcades, with the greatest prize being a chance to play the next game for free. Then there were consoles, and kids could finally play against each other.

Back in the 1990s, the main award for video gamers was a chance to play for free

Then, a new era had dawned – the time of personal computers. Soon, players realised that they could link their desktops together via a local network. First, they did it inside an apartment, then they’d connect an entire neighbourhood. They would run cables between roofs. Then, the first computer clubs opened in the basements of those buildings. That was where the first Russian esports stars practised all night long, sleeping in chairs afterwards. Back then, there was no talk about any contracts or prize funds. The biggest reward one could get was a chance to play some games for free.

“Esports is my job,” says Yaroslav Kuznetsov. “Actually, everything I do in this life has something to do with esports, one way or another. And when I started getting paid what was an average wage for a Russian citizen, I guess that was when it became something more than a hobby.” 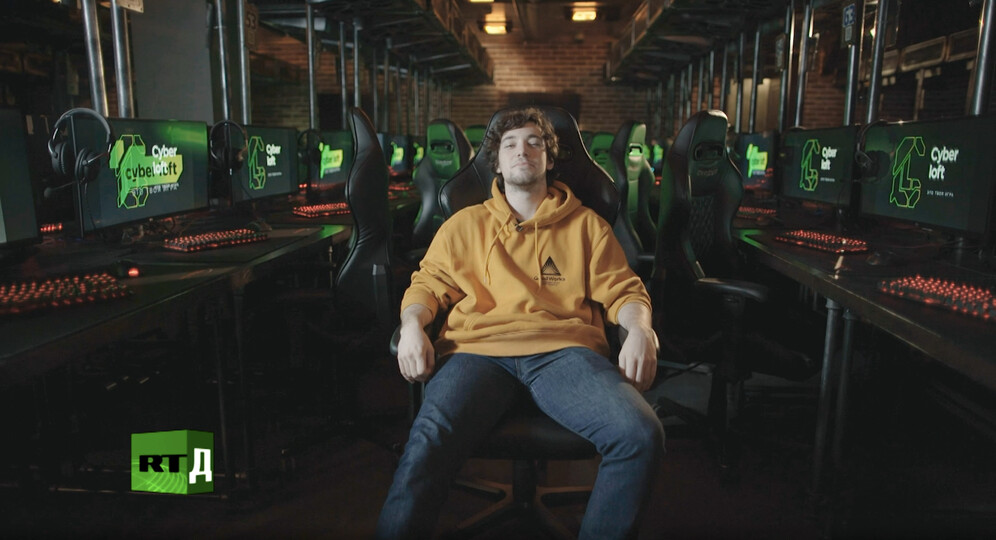 Every cyber sportsman has a ‘method’, that is their team, their coach, a well-structured practice schedule, competitions they get ready for

It looks like the approach to cybersport training is very similar to that in conventional sports. In order to succeed, e-sportsmen have to devote all their time to endless training and strategic planning.

“If we picture a person who just sits at a computer and says: Mom, Dad, I’m a cyber athlete now. No, they’re not,” says Dmitry Smith, the president of the Russian Cybersport Federation. “They will become cyber athletes when they have a method. When I say 'method,' I mean that they have their team, their coach, a well-structured practice schedule, competitions they get ready for. And they get ready for it not by just sitting around and playing video games. They analyse, watch, prepare for their potential opponents, identify their strengths and weaknesses.”

Success demands sacrifice. And it looks like in video gaming the sacrifice is really heavy.

“Those years when you socialise with people, when you meet your first love, when you break up for the first time, all that stuff… These people spend all this time sitting at a computer to achieve their goals. Just think about it: they play only one game. Not like us, consumers, do it, when we play it once, get bored, and get something else. No. There’s only one game, there is a certain set of maps, and they play it for ten or even fifteen years. And at some point, you suffer burnout. At some point, you quit the game, and you realise that that’s it, you can’t even look at it anymore. You’re tired. And they quit. Yes, they are famous. Yes, they’ve got money. But they’re miserable.” 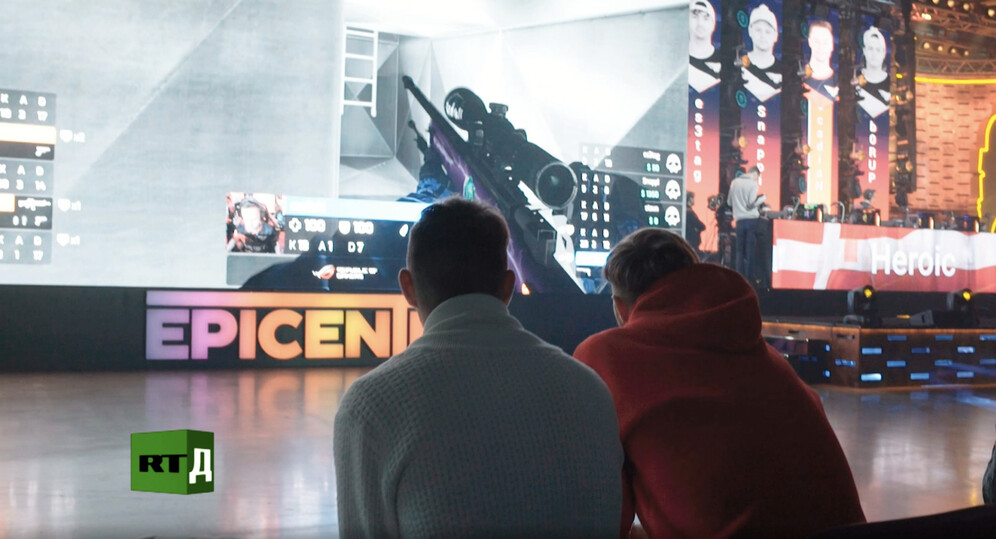 Two years ago, the worth of the esports industry was $4.5 billion. The prize pool of the major tournaments was tens of millions of dollars. Players of the winning team could easily earn as much as $3 million each. Many top-tier players have sponsorship contracts, and they receive monthly ‘wages’ of $20-30,000, just like that. But these are esports stars. There are only a few of them, perhaps a couple of dozen. But their financial glory is shining so bright, they infect the minds of millions with this dream.

“Players that join esports these days are 14-15-16 years old,” says Yaroslav Kuznetsov. “And obviously, when a 16-year-old wins one million dollars, it’s hard to resist certain temptations and not go a little bit crazy. Globally, if we talk about Dota, there are 11-12 million unique users per month that play this game. And perhaps, only 500 of them can make a decent living out of it. Just think about it.”

Video games – in terms of their outreach, expenses, the number of people developing them – have long become a match for Hollywood. And the approach towards game dev – game development – is similar to filmmaking. From graphics to audio. 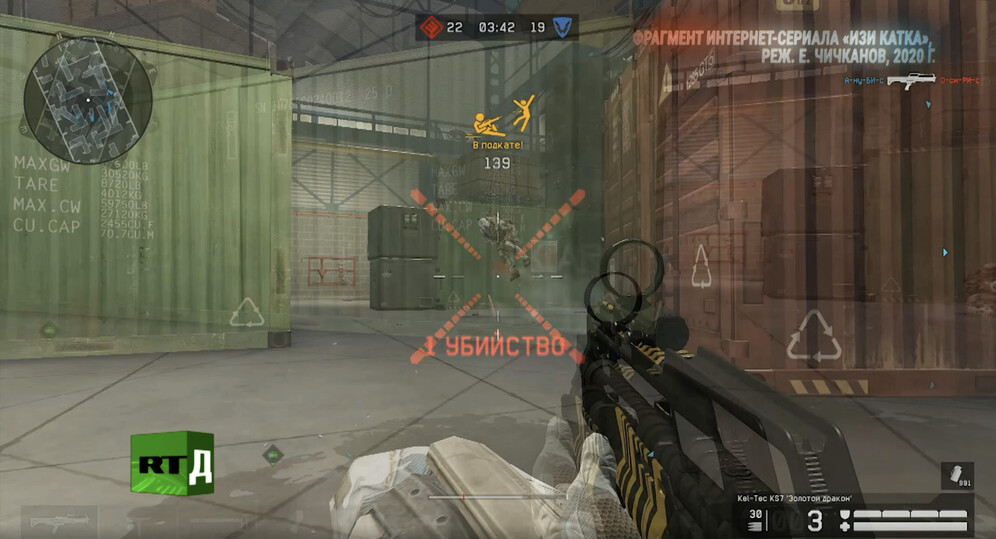 Video games – in terms of their outreach, expenses, the number of people developing them – have long become a match for Hollywood

“Esports is actually a marketing ploy to sell video games,” says Yaroslav Kuznetsov. “It serves as a publicity campaign for these games. Esports alone... I don’t think they really need it if we take an advertising component out of it. Because players follow cyber athletes, they see them as idols. They want to be as successful, so they play more. So, it’s common publicity tactics.”

The more popular cyber athletes there are, the more they become role models, idols for the people consuming the game, the better it is for the game creators because it boosts sales.

The marketing process is largely facilitated by the accessibility of video gaming as a sport.

“You can watch, pick some elements for yourself, and enhance your skills. The more popular cyber athletes there are, the more they become role models, idols for the people consuming the game, the better it is for a publisher because it boosts sales.” 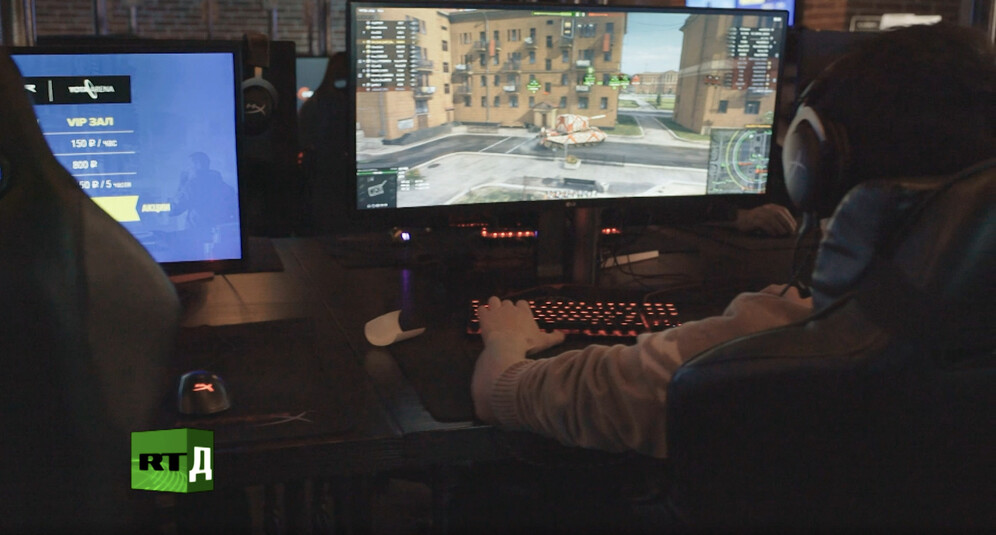 Esports is a marketing ploy to sell video games

The future is now

“I can’t picture the future where esports would replace the real sport. No. “But being on equal footing – that’s what’s happening already,” says Natalya Pershits, Head of Operations, World of Tanks Blitz. 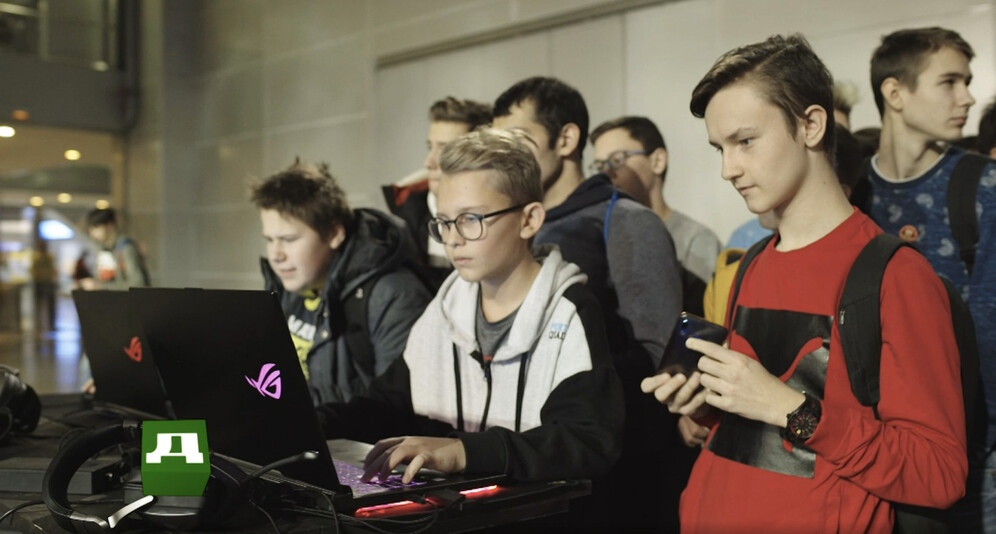 To learn more about the e-sport, tune in to the premiere of Esport. Tapping for Glory on Wednesday!