Child kidnapping in China: The unfortunate aftermath of the one-child policy
The story of ‘humanzee’: how scientists tried to create a new human species

Since last March, Europe has been diving in and out of quarantine waves as a small boat braving the epidemic’s rough seas. Brief business reopenings were quickly linked to the growing number of coronavirus cases, resulting in new shutdowns. Having to deal with substantial economic losses and popular revolt against stringent measures, Europe is faced with a harsh reality. Everyday life needs to resume well before herd immunity has been achieved. With vaccinations progressing relatively slowly, the only viable way of doing so is to “separate the sheep from the goats” — by choosing between those with antibodies and those without.

The difference will need some government-issued document confirming the holder has been vaccinated against the coronavirus or has otherwise got antibodies. Whether in the form of physical credentials or a smartphone code, the proof of safety to others will serve as a pass, giving access to very much missed and desired normalcy.

The idea to introduce the so-called “vaccine passports” has been around long enough to secure both supporters and opponents.

On the one hand, vaccination ID’s allow millions of people to resume activities: go back to work, see older relatives, travel domestically or internationally, and safely go to movie theatres, gyms and hair salons. On the other hand, given patchy access to vaccines in different parts of the world and the grim prognosis, the poorest countries might still be two to three years away from getting enough of their population inoculated, introducing vaccine passports might raise some serious political and humanitarian questions. The world could end up divided into two major blocks: the countries rich enough to buy or produce vaccines and those lagging and suffering the consequences. 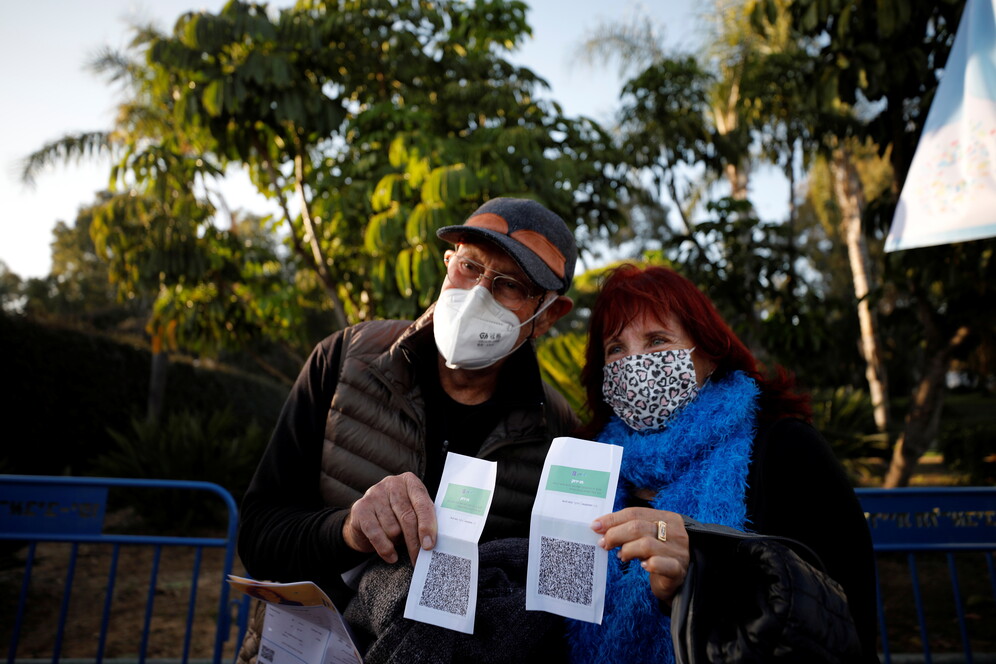 A senior resident couple pose for a photo with their "Green Pass", a pass for those vaccinated against the coronavirus disease before they enter a live performance by Israeli singer Nurit Galron./REUTERS by Amir Cohen

The ethical side of vaccine passports remains dubious at best. Their introduction will not only enable the lucky vaccinated ones to enjoy all the benefits of normalcy but will restrict those who couldn’t (or wouldn’t) get a jab from participating in public life, curb their freedom of movement, cut them off from economic resources and create all sorts of discrimination prejudice and stigma.

American experts are quite unsurprisingly preoccupied with racial and social inequality in vaccine distribution, which, according to them, automatically makes immunity passport unethical. Given that currently, the only social groups eligible for vaccination in the US are older adults (60-65+), individuals with health conditions making them more susceptible to COVID-19, and frontline workers (and whoever is eligible gets the jab free of charge), the logic isn’t entirely clear. On a global scale, however, it’s been acknowledged that equitable access to vaccines is essential both from the humanitarian and economic standpoints — vaccine nationalism could cost the world up to $1.2 trillion in GDP.

The European Union has announced plans to introduce a so-called “green pass” — a digital vaccination passport. According to Euronews, the European Commission is expected to publish a draft of the legislation by March 17. The passport would allow fully-vaccinated individuals to move freely between the bloc’s 27 nations.

However, there’s no unanimity between the countries’ leaders regarding the plan. Tourism-oriented countries such as Greece and Spain are keen to adopt the legislation that would, at least to some extent, save the coming travel season. At the same time, France and Germany remain sceptical, seeing much potential for discrimination between vaccinated and non-vaccinated Europeans. The concerns ring true, given a staggeringly different rate of vaccinations throughout Europe. Speaking of Europe in general, the UK leads the race in the total number of vaccines administered, followed by Turkey, Germany and Russia. As for the bloc’s population, only 5% has so far received at least a single shot. A Bahraini man shows his vaccination certificate after he received dose of a coronavirus disease at Bahrain International Exhibition & Convention Centre./ REUTERS by Hamad I Mohammed

This suggests the EU joint vaccine procurement scheme announced last June isn’t working as efficiently as everyone hoped. Some countries have become so frustrated with supply shortages and slow rollout they decided to take matters into their own hands. Austria and Denmark, along with Slovakia, Poland, Hungary and Czechia, chose to break from Brussels’ vaccine strategy, opting to buy surplus vaccine doses from countries like Israel, or purchase Russian and Chinese vaccines and authorise them at a national level, without approval from either the European Medicines Agency (EMA) or the WHO.

However, the European Commission’s President Ursula von der Leyen expressed certainty that 70% of all adult EU citizens will have been inoculated by the end of the summer, so, according to her, introducing a European vaccine passport in the coming months makes sense. As for the UK, which is no longer part of the EU, according to British Prime Minister Boris Johnson’s spokesperson, it will consider involving itself in the EU vaccine passport programme as well.

With an assortment of vaccines currently administered throughout the EU, it’s difficult to tell whether Brussels will eventually adopt the “all are welcome” policy or restrict vaccination passports only to a certain number of EMA/WHO-approved jabs.

There’s also an option to include the holders’ broader medical history, including their previous run-ins with the virus that resulted in their developing antibodies. In this case, a much greater number of Europeans could get a “green pass” and a green light to everyday lives.

While most countries are only contemplating the idea or vaccination certificates, Israel, whose inoculation rate is the world’s highest, was the first to implement a system that has allowed reopening cultural hubs for the pass holders. In the middle of February, Israel introduced “Green passports” for those who’d been fully vaccinated. Apart from giving the holders a chance to go to restaurants, movie theatres and malls, it allows them to travel outside the country and forgo the mandatory quarantine upon returning home. 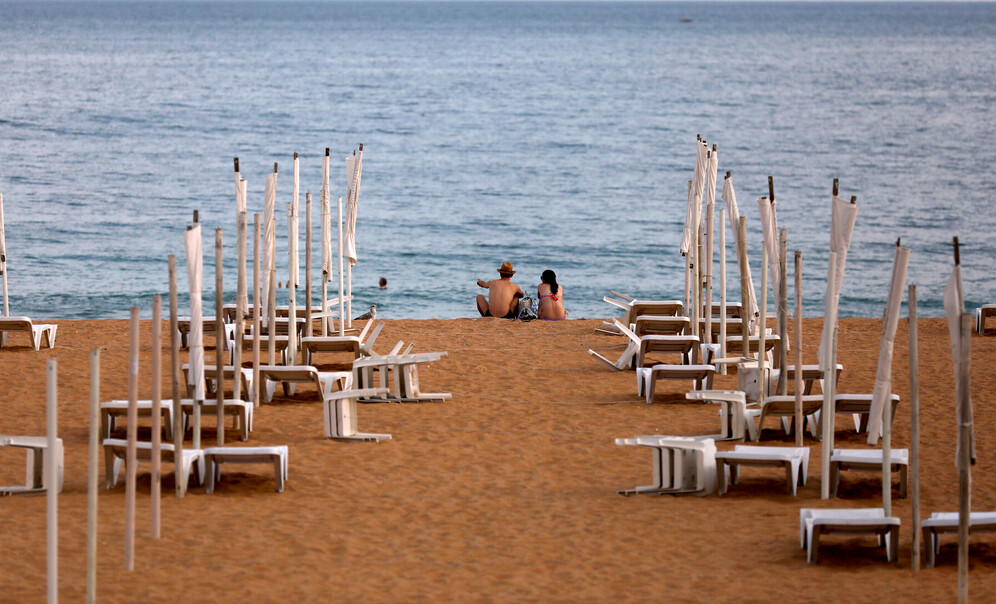 A couple sitting ext to rows of empty hammocks during the coronavirus pandemic in Albufeira, Portugal./REUTERS by Rafael Marchante

China has also introduced a national digital health certificate on March 9. The certificates are supposed to facilitate travel within the country and abroad, but they are of little use without international recognition. It is worth noting that the Chinese scheme is not mandatory and doesn’t affect the degree of freedom certificate holders have within the country. French President Emmanuel Macron, on the other hand, has suggested introducing national “COVID-free” slips — the so-called “health passes” — that would allow fully-vaccinated people to attend public events and go to restaurants, museums and gyms.

It is quite clear that limiting the freedoms of unvaccinated people would invite legal challenges and cause public outrage. Apart from that, doctors and vaccination experts agree the idea of vaccine passports comes with some red flags.

First, having had a vaccination doesn’t make one 100% immune to COVID-19, especially since several new variants have been discovered. Secondly, it’s still unknown how effective vaccinations are in reducing virus transmission. Plus, making vaccinations a mandatory — de facto — requirement for resuming an everyday life will inevitably result in a backlash on the part of hesitant individuals, driving down compliance, as has been the case with mask-wearing and social distancing. Once something becomes mandated, it becomes political.

Before introducing vaccine passport programmes, many questions need to be answered. Matters of privacy, security and safety have to be weighed against economic and public health benefits. Scaling the programmes globally will require even more care to make sure “health passes” don’t turn into an instrument of discrimination and infringement of personal rights. Still, suppose we want to resume some semblance of normalcy. In that case, we’ll need to devise a mechanism that would allow us to manoeuvre through the epidemic without shutting down the world because COVID-19 may be the first global pandemic that requires a consolidated effort by everybody to get through, but it’s unlikely to be the last.