Leech smartphone designer:“ The more time you spend online, the more blood will be consumed.”
“I live in a community, we're interested in protecting it in a peaceful manner” - Diary of a New Yorker on anti-looting patrol

Don't buy 5G protection gear, until you read this story

The advent of a new generation of mobile network technologies (5G) has again triggered dozens of alarming claims about its dangers to our health and wellbeing.

A quick Google search yields dozens of results, ranging from cheap 5G phone protective cases and home wi-fi router covers, to reflective skullcaps (more sophisticated cousins of the proverbial “tinfoil hat”) and slabs of undisclosed metal for $1,500 a pop. All of them promise the happy owner peace of mind and protection from harmful EMF rays. Should we be worried?

Electromagnetic field (EMF) radiation has been frowned upon as a potential health hazard since its sources came into everyday use. First, power lines were considered the culprit of all ailments, then came household appliances like TVs and microwave ovens, and now cell phones and signal transmitters are to blame. On each occasion, a new connectivity milestone sparked a tidal wave of fears: in the year 2000 with the launch of UMTS (3G), at the dawn of LTE in 2010, and then when the 4G networks rolled out. 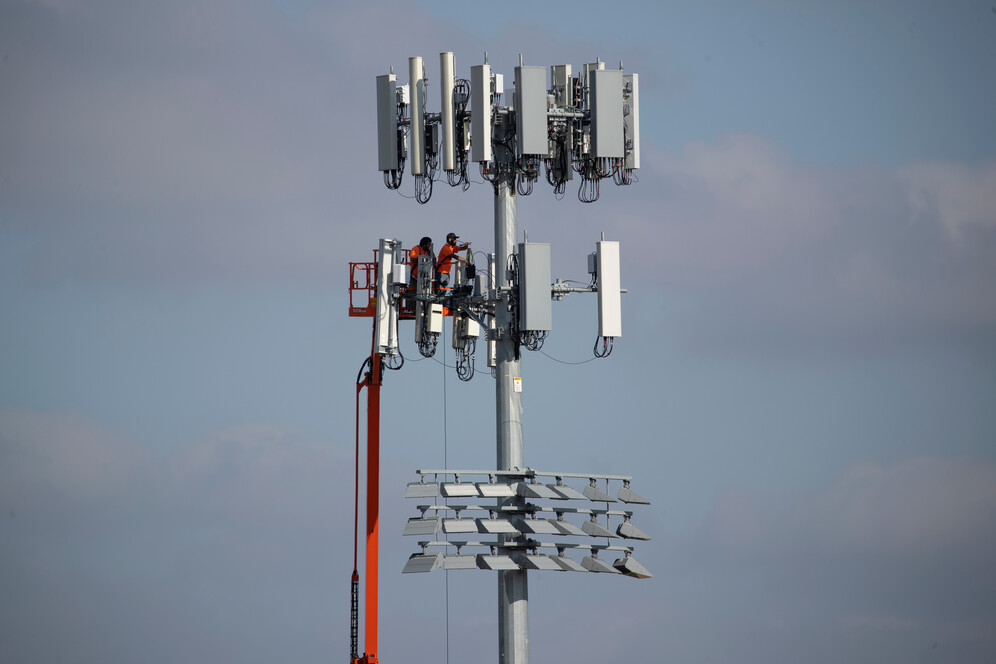 Unlike their previous iterations, 5G networks will use millimetre waves that allow for more devices to be connected to the same network at the same time, but due to their comparative weakness they’ll need a system of miniature cell towers the size of a shoebox, that will be placed as close as 250 metres apart throughout cities and inside buildings – basically, everywhere we need coverage.

The new speed provided by 5G will enable augmented reality applications and self-driving cars, not to mention the impossible quality of video streaming and calling.

However, the fact that many more cell towers will be placed much closer to where people live and work has ignited consumers’ fears, and now both individuals and state 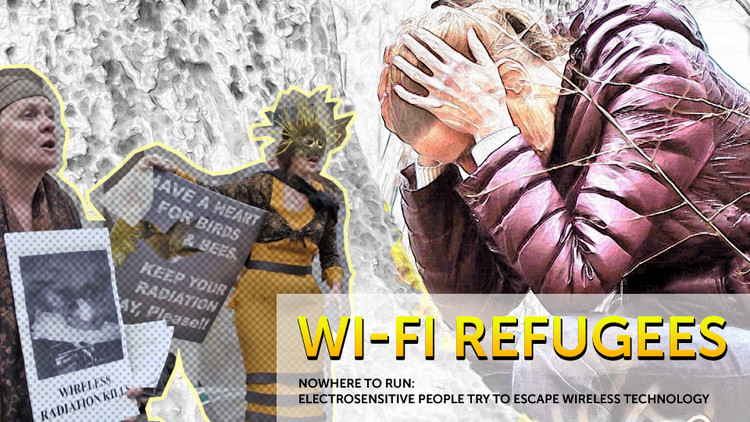 agencies are questioning the health implications of the new technology. In Belgium, the Netherlands, Slovenia, and Switzerland, governments aren’t ready to rush in and have decided to take a closer look at the matter. While there’s no conclusive proof that radiation from cell phones can damage one’s health, there’s still an often-mentioned report issued by the World Health Organization in 2011 listing radiation from mobile phones as a possible carcinogenic hazard, alongside gasoline exhaust fumes, lead and chloroform. At the same time, the American Cancer Society hasn’t found a link between cancer development and cell phone use. Although certain concerns might be valid, including those weighing in on the environmental impact of 5G and long-term effects for future generations’ health, some of the theories surrounding a looming roll-out of 5G are Flat-Earth-level absurd.

The timing of 5G launch that quite unfortunately coincided with the worldwide COVID-19 pandemic has resulted in various conspiracy theories.

One of the conspiracy theories being spread on social media claims that 5G accelerates the spread of the virus by lowering the body's immune system. Another argues that the coronavirus is nothing more than fiction designed to cover up the damage done by 5G.

When great disasters like the current pandemic strike, many tend to forget an important rule of logic: “correlation does not imply causation”. For some, the two events have gelled into one, so they decided to fight the virus by fighting the new 5G towers. The result: over 70 arsons in the UK and many more towers vandalised and burnt throughout Europe, Australia, and New Zealand. 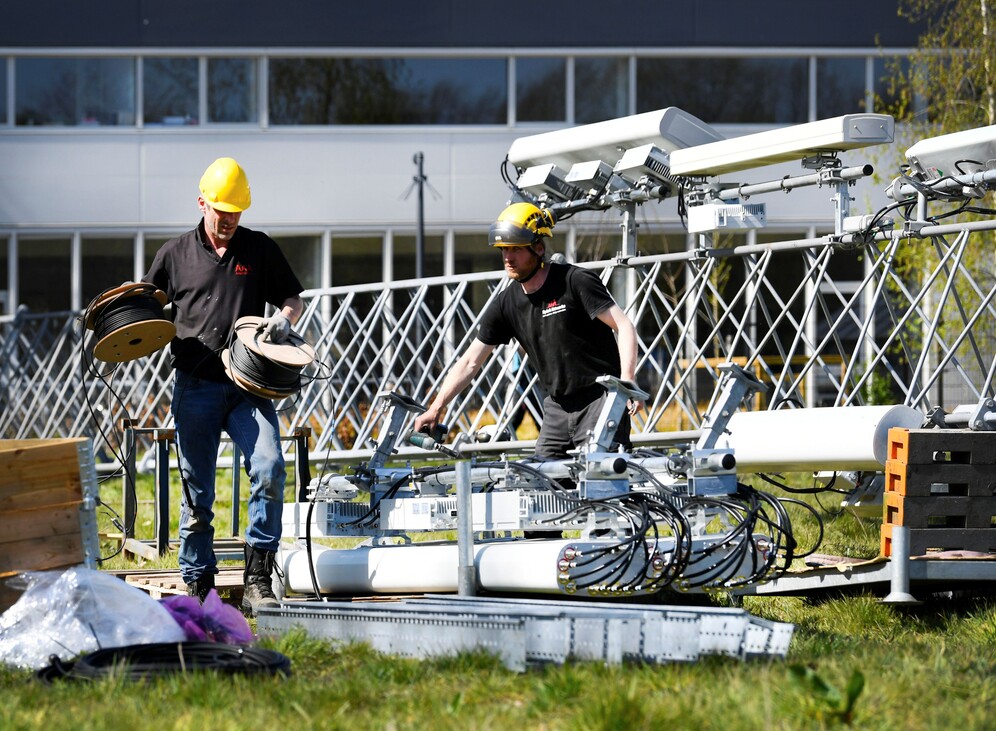 Network administrators build a cell tower as the cabling of another cellular transmission mast has been damaged, in Nuenen, Netherlands/REUTERS by Piroschka van de Wouw

Luckily, not all the supporters of the 5G conspiracy theory are quite so militant. The majority just vents on social media and looks for ways to protect themselves from the imminent evil. This is when most unsavoury business practices come into play: the current volatile situation has given rise to hundreds upon hundreds of enterprises that came up with tools, gadgets, and accessories purported to minimise the hypothetical harm caused by 5G-enabled and EMF-emitting devices.

The Russian segment of the internet has recently burst with skin creams priced between $2 and $50 that are supposed to protect one’s health and beauty from the ever-prying rays of 5G.

Hustlers all around the world are catering to people’s fears by offering both cheap and luxurious, but equally useless merchandise. A “bio-shield” promising to “balance and re-harmonise the disturbing frequencies arising from the electric fog” and offered for £339 has turned out to be nothing more than a flash drive with a holographic sticker sold by some scammers and is currently being investigated (Anti-5G USB stick scam under investigation).

At the same time, EMF meters are among the most popular devices sold on Amazon, but if you can’t afford to dish out an average of $150 for one, you can snatch a $30 EMF protection blanket and hide under it until the 5G network has been destroyed by modern-day Robin Hoods.

Before you reach for your credit card and buy any of these, another fact to consider: although the word “radiation” has an ominous ring to it, please, don’t confuse ionising and non-ionising radiation. The latter is emitted by mobile phones and base stations and isn’t capable of breaking apart DNA and causing direct cell damage leading to cancer. Ionising radiation sources, like UV-rays and X-rays, have, on the other hand, have been proven to do exactly that, hence the sunscreens we apply at the beach and X-ray protection we wear for the radiologist.

Plus, knowing that the power of electromagnetic radiation goes down with distance extremely fast when moving away from the transmitter, it becomes clear that it’s the cell phone against your ear and not the tower a mile away that could be a potential source of trouble – should it ever become one.

A phone next to your head is transmitting at a power roughly 10,000 times more than the signal received from that distant tower.

Having said that, the microwave radiation levels of modern-day mobile phones have gone down about 10 times since the start of digital mobile communication in the early 1990s.

Those who’d still rather err on the side of caution might want to use headphones or earbuds when they talk on the phone and ditch the habit of keeping their gadgets on their bedside tables at night. That’s much cheaper and more effective than sleeping in reflective pyjamas and a cap, which will do nothing more than make you sweaty and miserable.