Killology creator: “If you properly prepare yourself, killing is just not that big a deal.”
Like father like son: Artificial intelligence is only as racist, xenophobic, and sexist as we are

Beastly vaccines, ban on detergents and mandatory school prayers: What will happen if Kanye becomes President

Rapper Kanye West first announced his intention to run for US President on July 5 leaving even his fans stunned — and they're pretty used to his antics. To show he means business West has filed the paperwork and paid the $35,000 fee to appear on Oklahoma's presidential ballot. Does Kanye really have a chance to occupy the White House for the next four years? Is it really a good idea to entrust a whole country to someone with a showbiz background?

The rapper has toyed with the idea since the last election and he clearly mentioned his desire to give the presidency a try in his 2016 MTV Video Music Award speech.

Initially a Trump supporter, the rapper revisited the idea as he became disenchanted in the President over his faulty decision-making regarding the pandemic and handling of the George Floyd protests.

Technically, Kanye is eligible for the position, as he is over 35 years old and an American citizen with over 14 years of US residency.

However, the thing is, anyone can register as a candidate, since the procedure is very simple and filling out the forms means “very little”, according to Paul S. Ryan, vice president of policy and litigation at Common Cause.

During a special investigation, The New York Times found out that such registration does make a candidate out of Mr. West, though putting him in a company of 1,144 other people with the same prospects. The F.E.C.’s database included such names as Tossup C.I. Bot; Big Chungus and Your Mom, all registered on the same date.

Still, the election is not for four months, and the coronavirus may have given Kanye an excellent service since now he has leeway to register his candidacy in the states where deadlines would otherwise have been missed. So, he still has a chance.

To become a full-fledged candidate, West has to hash things out concerning his recent deal with GAP, which brings Yeezy apparel line — footwear excluded — to the retail chain.

In an extensive interview with Forbes the rapper claimed that his words weren't just a part of a fancy PR campaign for his new album. "I'm speaking with experts, I'm going to speak with Jared Kushner, the White House, with Biden," he says.

If one sets his or her mind on running for the presidency, they need to make sure they are in a party. Kanye was also very creative when it came to filling "the party" requirements. Since the two existing ones already have their candidates, Kanye backed himself by a third, the Birthday Party, that is; pun intended.

One might see it as a tribute to a particular music band, but things are more straightforward: "When we win, it's everybody's birthday." His motto is «YES!» by the way.

Kanye's wife Kim Kardashian, who recently became a billionaire and is currently studying to become a lawyer, and Elon Musk, who is promised the position at the helm of the US space programme, joined the team of West's advisers. 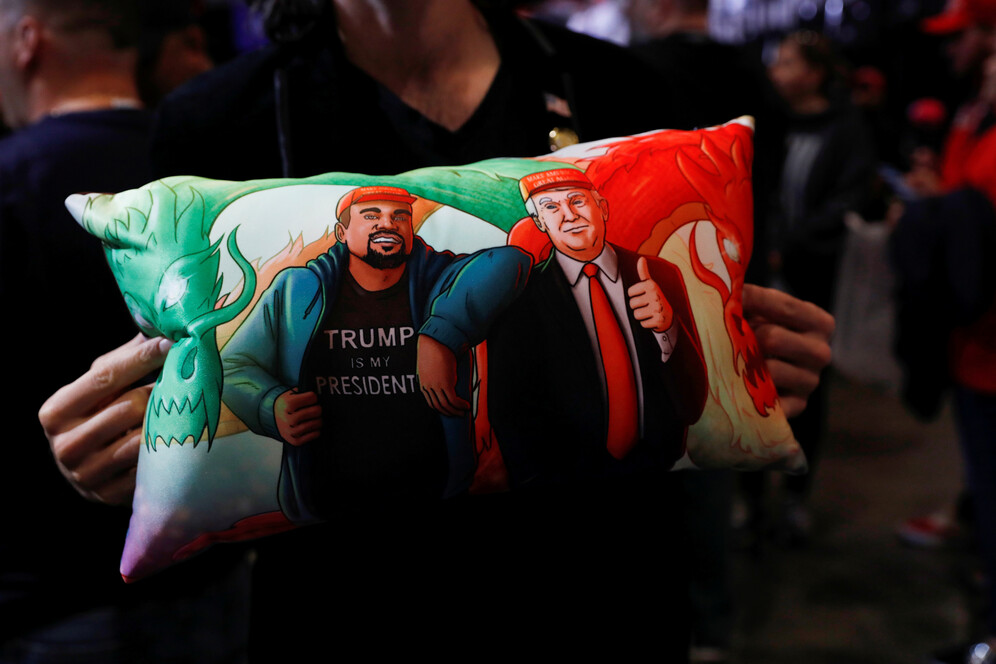 A supporter of U.S. President Donald Trump holds a pillow of him and Kanye West /REUTERS by Shannon Stapleton

In the meantime, Donald Trump knows about Kanye's change of heart and thinks the whole situation is "very interesting".

There is a distinct notion that at the moment Kanye West looks a lot like a lame duck in this election, who, on top of everything, is very likely to pull a considerable chunk of black voters from the Democrats. But the singer himself doesn't want to acknowledge that: "That is a form of racism and white supremacy and white control to say that all Black people need to be Democrat and to assume that me running is me splitting the vote. All of that information is being charged up on social media platforms by Democrats."

The pro-vaccination electorate is not going to be happy with Kanye's agenda and neither will pro-choicers. The rapper not only questions vaccination but also calls it "the mark of the beast" that leaves children "vaccinated and paralysed". Programmes like Planned Parenthood are work of the Devil brought down by the white supremacists.

In case of COVID, the alleged vaccination ineffectiveness piles up on the conspiracy theory: "They want to put chips inside of us, they want to do all kinds of things, to make it where we can't cross the gates of heaven." Similarly, West intends to do aways with "chemicals", meaning cosmetics and detergents, because they also meddle with faith in God.

Taking his Christian agenda even further, he calls for making prayers mandatory in schools as a way to revive fear and love of God among students. To his way of thinking, "the human beings working for the Devil removed God and prayer from the schools. That means more drugs, more murders, more suicide."

Kanye is determined to focus on police brutality. However, he admits the police are also human, and it's all challenging to talk about. However, he is one of the few black people who have the ability to speak freely about it. 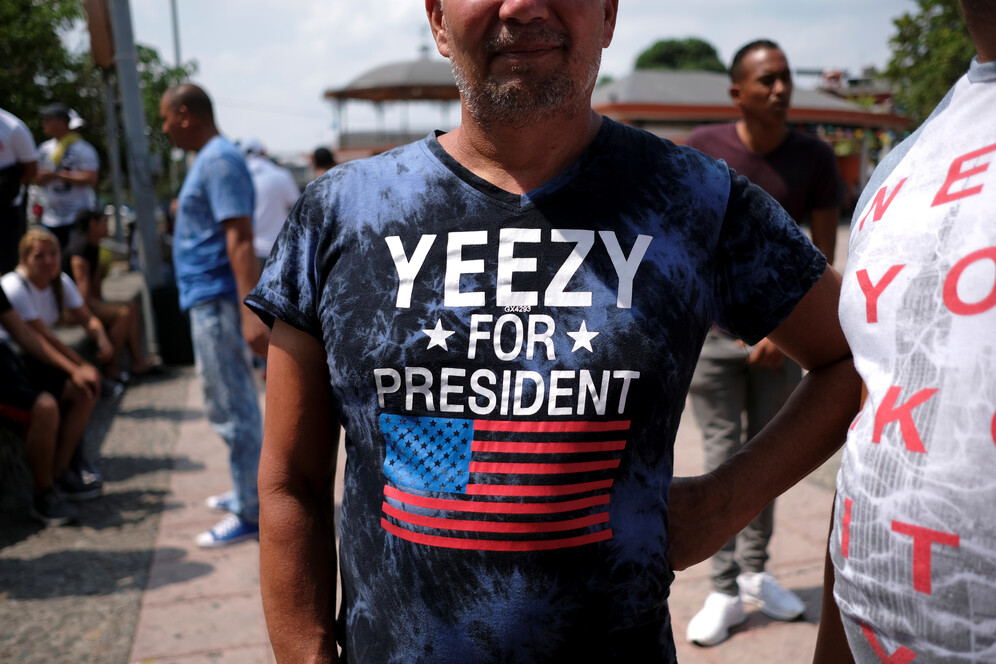 His foreign policy seems rather vague, as West plans to give special attention to home affairs while the country will be protected "with our great military". In an interview, he did mention his particular fondness for China, and the fact that he — unlike Trump — doesn't blame the Chinese people for the coronavirus pandemic "I love China. It's not China's fault that disease. It's not the Chinese people's fault. They're God's people also." His stance on the origin of coronavirus though is pretty unsurprising: "We pray. We pray for the freedom. It's all about God. We need to stop doing things that make God mad."

The most exciting is perhaps the fact that Kanye is going to model the White House structure after Wakanda — the make-believe and highly developed country in Marvel's Black Panther comics. Question is, how is he going to marry his love of conspiracy and traditional views and the image of a highly developed hi-tech world of Wakanda?

Anything is possible 🇺🇸 #kanyewest Artwork by: @beeple_crap