Online bullying is bad, so why do we do it?
Show me your trash, and I will tell who you are: How garbage reflects our identity

The top 5 most polluted waters in the world

Humans need water to live. But what happens when human activity poisons rivers, oceans or lakes? Here are our top 5 amongst the most polluted waters on the planet. There are all kinds of ways to foul a body of water, so ranking them is subjective, but each one is a world-beater in the water pollution Olympics.

The Citarum is the main river in West Java, Indonesia, and famous for being the most polluted waterway in the world. Things started to go wrong when over 2,000 industrial facilities, from the textiles industry to pharmaceuticals, set up shop on its banks from the 1990s onward. They started pouring untreated waste into the 300 km long river which supplies drinking water to 25 million people. It’s estimated 280 tonnes of toxic waste gets dumped in the Citarum every day, including lead, chromium, zinc and polonium.

“When we visit a factory, sometimes the water is clean and clear, but local residents sometimes complain that it turns blue or red at night. During the day, they may treat their waste, but at night or during heavy rain, they cut corners and dump untreated waste in the river”, Andri Gumilar, a local ecologist, told RT Documentary.

Lake Karachay in the Urals region of Russia may be the most highly radioactive body of water in the world. Starting in 1951, the lake was used to dump radioactive waste for the nearby Mayak plant, that made plutonium for the USSR’s nuclear bomb project. 150 million curies of long lived radioactive waste accumulated in the 26 hectare body of water. This is 6 times higher than at Chernobyl.

After a scare in 1957, plant authorities started taking more care in the disposal of waste. According to the Russian Academy of Science, any spreading of radioactive dust could have killed 20,000 people living in the area. 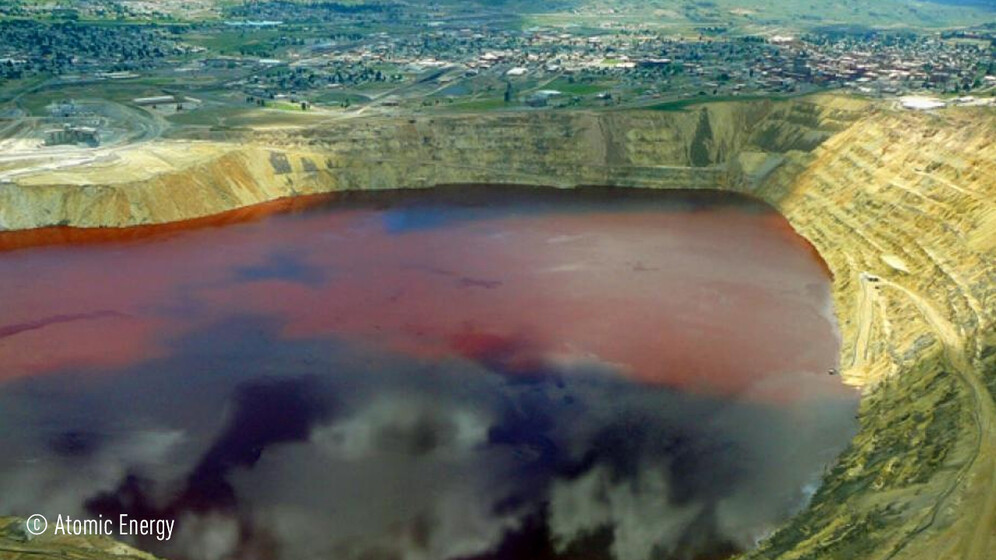 Starting in the 1960s, Lake Karachay’s water level has gone down, potentially exposing its radioactivity. Since 1980, the lake’s been progressively filled with concrete, to stop anything getting out. It was completely sealed in 2015. Now, the Russian government has budgeted 130 billion rubles for monitoring the site.

To hundreds of millions of Indians, the Ganges is a sacred river. However, it’s also a dirty one. The river is 2,500 km long and one of the most heavily polluted bodies of water in the world. 1.3 billions of litres of sewage is released untreated into it every day.

Lack of toilets is one of the main problems facing poor Indians. 113 million rural household were without one in 2017. People have to defecate in fields. The waste seeps towards rivers. Others do their business right in the Ganges.

Dead bodies are also disposed of in the holy waterway, according to tradition. Such burials happen when people are too poor to pay for a cremation. In death, sacred cows have a similar fate.

According to Indian scientists Satyaprakash Pandey and L. Prasad, “an estimated 80% of all health problems and one-third of deaths in India are attributable to water-borne diseases.” These include cholera, hepatitis, typhoid and amoebic dysentery.

India’s President Modi made a top priority of the elimination of open defecation. By 2019, he announced 110 million toilets had been built. However, critics say the issue isn’t just one of access to sanitation. People also have to be trained and persuaded to use them. This may take a little longer.

To find out more, check out our film, Cry of a River.

The Caribbean sea conjures up pictures of a pristine paradise. But it is one of many seas blighted by an invisible killer: microplastics. In the Caribbean, the concentration of microplastics, which are smaller than 5 mm, is five times the global average.

Plastic accounts for 90% of all trash that finds its way into the ocean. This gets pushed by ocean currents into scary-sounding “Great Garbage Patches” in the Pacific, Atlantic, and Indian oceans.

However, the harm is greatest when you can’t see the plastic anymore. Once it is at sea, it breaks down into smaller and smaller fragments, under the effects of sea waves and UV rays. This results in a toxic soup that accumulates in the stomachs of sea animals.

Microplastics threaten both marine environments and human health. It’s believed they concentrate pollutants and bacteria. They also climb up the food chain to end up in the fish on our plates. Scientists say that by 2050 there will be more plastic than fish in the ocean.

Caribbean countries are particularly vulnerable to plastic since much of their food is imported with its packaging. The small islands lack recycling and processing facilities, and rubbish often ends up in the sea. Nevertheless, 14 Caribbean countries have now banned plastic bags and/or Styrofoam.

The Shatt al-Arab river is formed by the confluence of the Tigris and Euphrates, North of Basra, Iraq’s second city. It then flows 200 km to the sea. A combination of international engineering projects and poor waste management have turned its waters deadly. In the summer of 2018, 150,000 cases of water poisoning were reported in the city of 2.5 million inhabitants. Its parched canals are now filled with trash.

Since the 1990s, dams built mostly by Turkey, but also Iran and Syria, have held up the headwaters of the Tigris and Euphrates. As a result, Iraq lost 2/3 of its water supply. Waste continued to be dumped in the rivers regardless. The flood of freshwater reduced to a very dirty trickle. Instead, seawater pushed further and further inland. The salinity of the Shatt al-Arab in Basra is 10 times higher than the allowable maximum. Upstream, in the Mesopotamian Marshes, herders have to give their buffalo water brought in by tank, since the marshes they wade in are full of saltwater.

Iraq is trying to negotiate with Turkey to get a bigger share of the water, however Turkey has advised it to start managing properly the resources it has.

To find out more about the world’s water crisis, check out RT Documentary’s film No Way Back: Water.