Law on Mars? Why Elon Musk is writing the Red Planet’s constitution
A dead caver became an attraction during the Kentucky Cave War

The 23rd Beijing Music Festival opened on October 10 with the world premiere of a new symphony for chorus and orchestra “Dedicated to 2020”, conducted by Wuhan composer Zou Ye. The symphony was dedicated to “the people of Wuhan and of the rest of China who fought the coronavirus pandemic with solidarity and eventually won the battle”.

No need to remind you the city of Wuhan is where the first Covid-19 cases were reported last December. These days China claims to be virtually coronavirus-free, with only 15 new cases reported on November 12 by China’s National Health Commission. Compared to 142,860 new cases reported on November 11 in the USA and 314,000 new cases in Europe reported on November 8, statistics from China look like that from another planet. With the surge so dramatic all across the world, the second wave of the pandemic is looming large. In Washington Post American infection disease supremo Dr Anthony Fauci said the country “could not possibly be positioned more poorly” as winter approaches and colder temperatures lead people to gather indoors. Europe, across the Atlantic, is in a similarly tough spot, with lockdowns imposed again by a new onslaught of COVID-19.

Even though the new set of measures seems to be working, there’s still no point in the foreseeable future when the number of new cases drops to zero, and the world can celebrate victory over SARS-CoV-2 and laud its new heroes.

On October 9 China’s President Xi Jinping awarded medals to the country’s foremost COVID fighters — so-called “role models” — in a ceremony held at the Great Hall of the People in Beijing. During the ceremony, he didn’t wear a mask and shook hands. President Xi touted China’s role in battling the coronavirus pandemic while rendering widespread international help, He claimed: “China has become the first major economy to return to growth during the COVID-19 pandemic and has taken the lead in the world in both epidemic control and economic recovery”.

These days China is presenting itself as a global leader in pandemic response, and, perhaps, rightfully so. China is in the clear, and life in the country is returning to normal.

During a week-long holiday at the start of October dubbed the “National Day Golden Week” some 637 million people travelled around the country without any significant uptick in COVID cases. In October China reported economic grown for the second quarter in a row, demonstrating that the world’ second-largest economy is indeed recovering. What is China’s secret of being able to contain the virus wreaking havoc on the rest of the world? 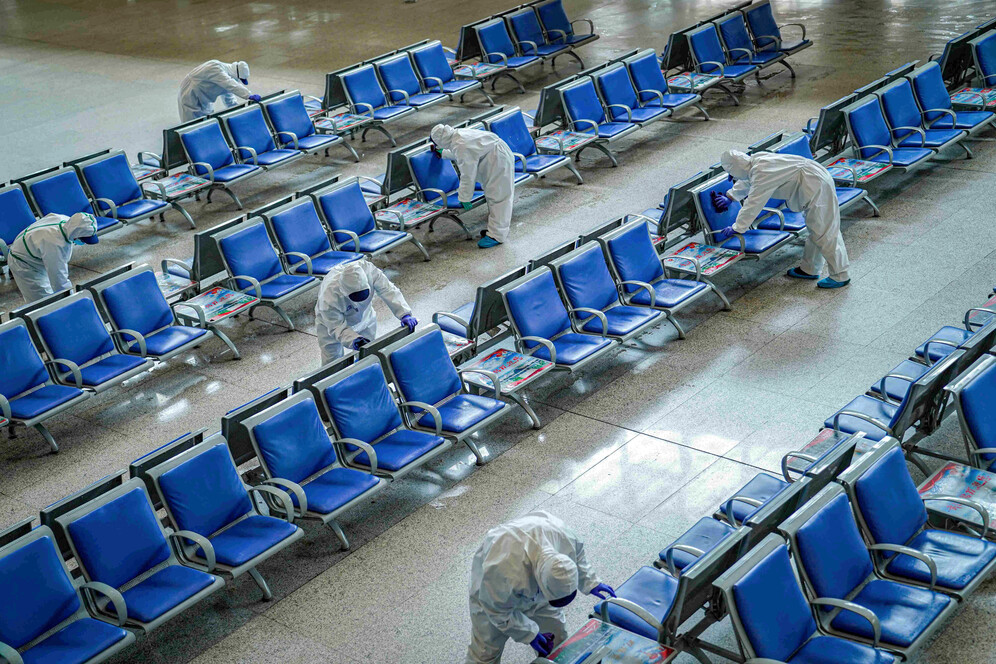 Workers disinfect a waiting hall at the Wuhan Railway Station which has been closed due to the novel coronavirus disease./REUTERS File Photo.

If you ask the Chinese, they’d probably tell you their country’s recovery is yet more proof the Communist Party rule offers an advantage of an organised social structure, backed by the respect for science and traditional Chinese morality. But practically speaking, containing the coronavirus turned out to be a success thanks to the introduction of mass testing and tough lockdowns, sealing the country’s borders and maintaining strong supply chains mostly independent of other countries.

On January 23 the city of Wuhan with a population of 11 million people, was ordered to go on lockdown that lasted the total of 76 days. Two days later the 45 million people of Hubei province followed suit and closed for the next three months. And in China, a lockdown means staying indoors 24/7, with public transportation suspended and supplies and food delivered to one’s door. Some towns would allow limited movement, with only one member of each household permitted to leave home every couple of days to do some essential shopping. 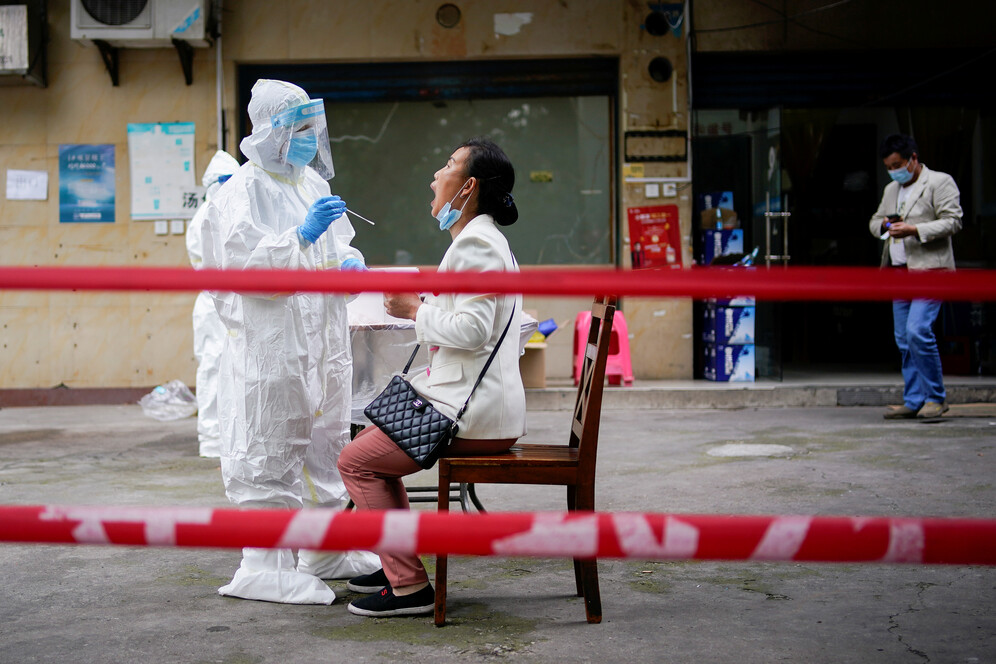 A medical worker conducts nucleic acid testings for residents at a residential compound in Wuhan./REUTERS by Aly Song

Early lockdown measures helped to bring local epidemics under control, but once people were permitted to move around again, tracking their movements became increasingly important. An elaborate colour-coded tracking system relying on mobile technology and big data was introduced by the government to curb the spread of coronavirus. A phone app would generate a personal QR-code determining where a specific individual was allowed to go — whether it’s a subway, or a mall, or a restaurant or some other public space. “Clearance” depended on whether he or she had been in the vicinity of a confirmed COVID case determined by geo-location tracking on their cell-phone.

If by any chance someone had been exposed to infection-carriers they’d be issued a QR-code ordering self-isolation or government quarantine. It would be safe to say such a level of surveillance doesn’t exist anywhere outside China.

A similar level of contact-tracking wouldn’t be possible to implement anywhere in Europe or the US. Attempt to track people’s movements were, however, introduced in Singapore where a contact-tracing smartphone app allows authorities to identify people who have been exposed to COVID-19 patients. Moscow also used a system of QR-codes to track movements and enforce its coronavirus lockdown.

Mass testing is another of China’s strong suits. Getting a COVID test has always been easy and free.

Those tested positive would be immediately sent into quarantine to prevent the spread of infection. Just one recent example: in October after 12 locally-transmitted cases were reported in the city of Qingdao in northeastern China, more than 10 million people living there were tested within a week just to trace the local outbreak to two dock workers. By comparison, New York state had tested 16.2 million people between March 4 and November 11. A method of batch testing is the technology that allowed the Chinese doctors to try this many people as quickly as possible. The method combines ten samples at a time during testing. If any batch turns out positive, then all ten people are quarantined and tested individually. 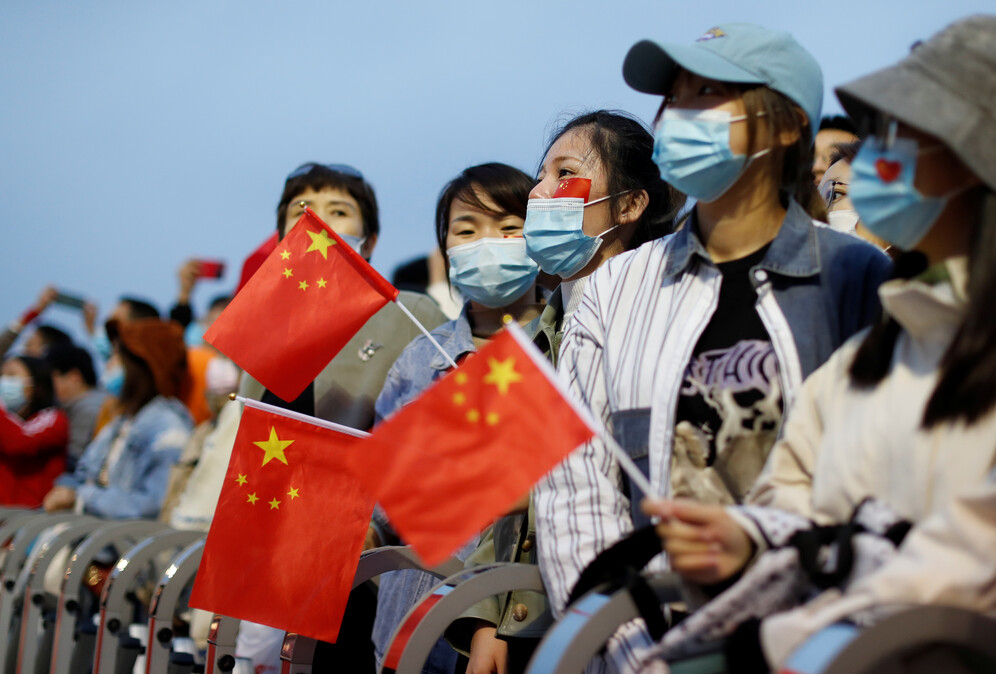 People wearing face masks attend a flag-raising ceremony at Tiananmen Square on National Day to mark the 71st anniversary of the founding of People's Republic of China, in Beijing, China./REUTERS by Carlos Garcia Rawlins

Apart from that, 14,000 health and temperature checkpoints were set up at most major transport hubs across the country, according to The Lancet medical journal. To help ease the load on the health system, China launched a system so-called Fangcang hospitals deployed within public venues such as stadiums and exhibition centres and used to isolate patients with mild-to-moderate symptoms of COVID-19. This way, conventional hospitals only catered to more severe cases, but, at the same time, patients didn’t have to stay at home, spreading the virus to their families.

Once China was out of the woods with very few domestic cases, the country started to gradually open its borders, making sure that all foreign travellers would get a health clearance upon entry.

Unlike in the US, where wearing a mask remains a controversial issue, in China, the benefits of wearing masks have been explained to people since day one. Mask-wearing culture in many Asian countries existed long before the coronavirus outbreak, thanks to air quality concerns and the experience of suffering through the SARS epidemic in 2003. Another legacy SARS left was a centralised epidemic response system lacking in other countries, which was decisive in terms of timely response.

Besides, China has a higher overall rate of compliance with orders coming from agencies of power, unlike Europe where no propaganda campaigns could help, since many regulations were disregarded, unless accompanied with a threat of fine or punishment. Despite the high level of compliance, in China, mask-wearing was also ensured by drones, nosing after individuals who were not following the rules and chastising them over loudspeakers. Gregory Poland, director of the Vaccine Research Group at the Mayo Clinic, summarised the hallmarks of the Chinese response by saying “Commitment to the greater good is engrained in the Chinese culture; there is not the hyper-individualism that characterises parts of the USA and has driven most of the resistance to the countermeasures against the coronavirus.” 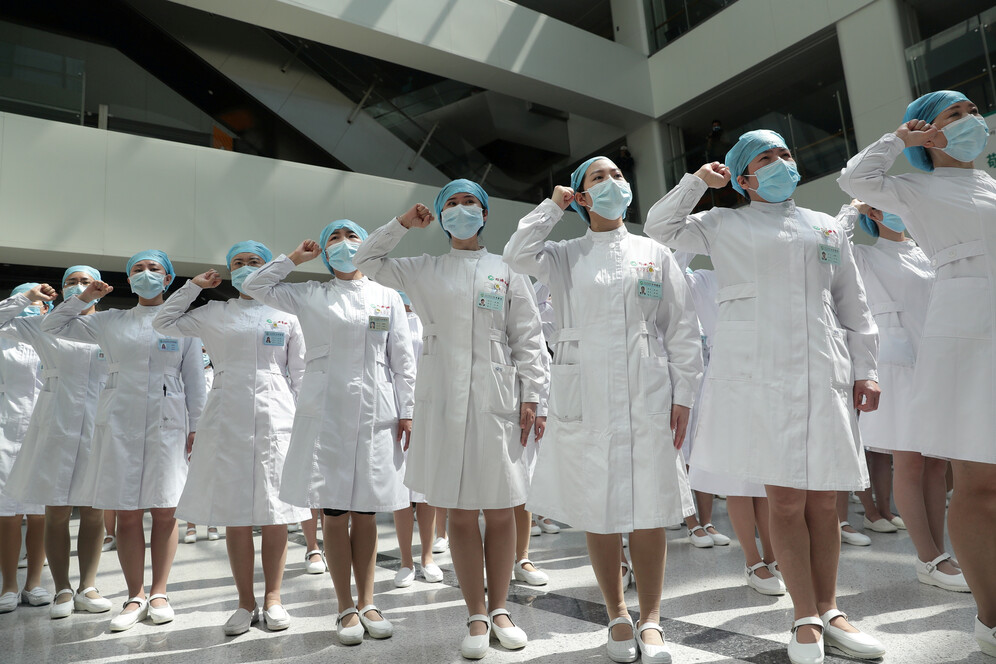 As far back as February, the World Health Organization said “much of the global community is not yet ready, in mindset and materially, to implement the measures that have been employed to contain COVID-19 in China.” Measures that have proven to be extremely successful in one country cannot be fully replicated in another, due to differences in health systems, national mentalities, and various socio-economic factors.

Western media deem Chinese measures too harsh and borderline totalitarian, speculating the country’s success is rooted in state control rather than public trust and civil society.

But given the current turn of events with coronavirus cases hitting records both in Europe and the US, it is tempting to give up some freedoms in favour of state control, given the state demonstrates its capability to turn the tide of the virus.